Highlight appeared on Jessi’s YouTube talk show “Showterview with Jessi” about talked about their legendary 2011 “On Rainy Days” performance on “Inkigayo.”

The group’s performance of their song “On Rainy Days” on the 626th episode of “Inkigayo” was turned into a meme and dubbed “On Pouring Days” for the sheer amount of water falling on the members in what presumably should have been a beautiful stage effect.

The members broke into fits of laughter when they were shown a video of the performance, and Yoon Doojoon commented, “It’s even funnier in high quality.” 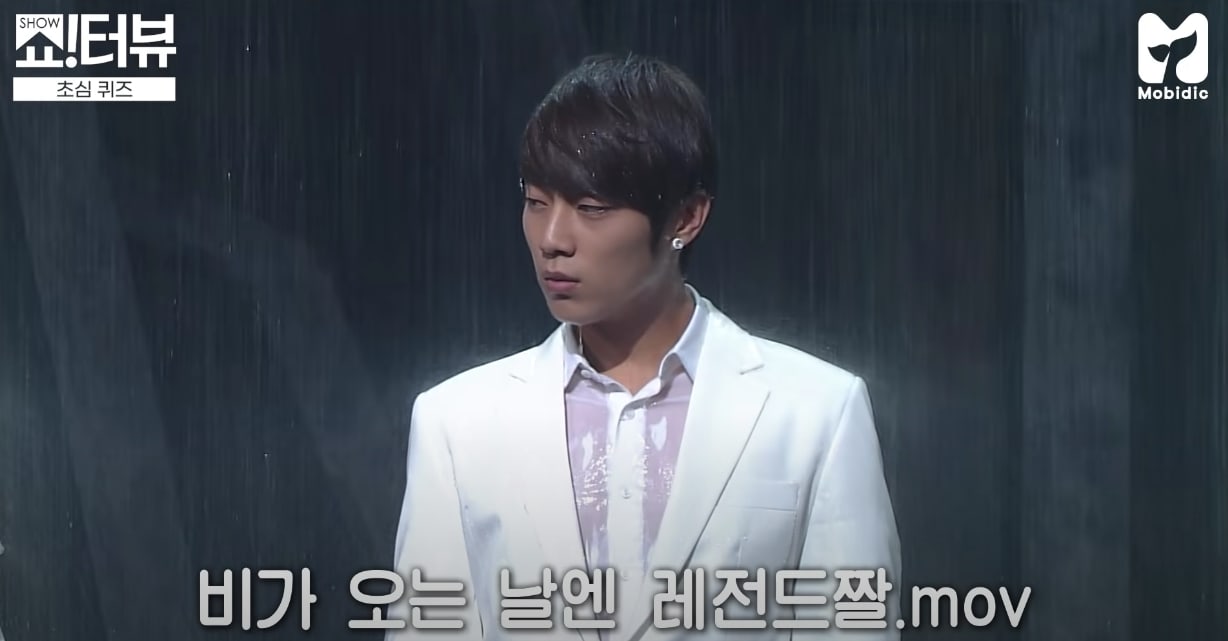 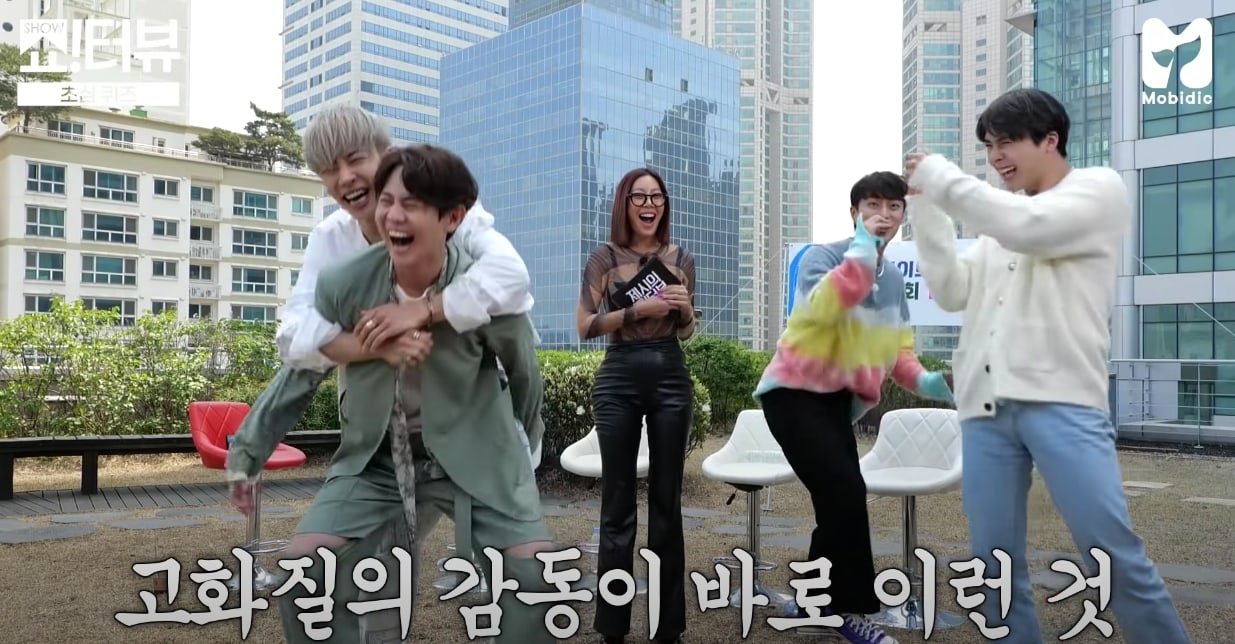 Lee Gikwang explained that he was making a sexy expression, thinking he would look sexy while being rained on, and Jessi reassured him that he did look sexy. Yang Yoseob shared that they didn’t know the water was pouring on them that hard because they could only do one take and couldn’t see what they looked like on screen.

Jessi quizzed them on what the stage producer’s intention behind the rainy stage could have been, and Yoon Doojoon hilariously guessed, “The stage was too dirty and had to be cleaned with water, so he killed two birds with one stone by making it part of the stage presentation for ‘On Rainy Days’ and also cleaning the set.” Lee Gikwang guessed, “He wanted to portray the vibe of sexy men drenched in rain.”

The “Showterview with Jessi” production team then revealed a video message from the “Inkigayo” producer at the time who directed the stage in question.

CP (chief director) Kwak Seung Young explained, “It was because of my infinite love for the Highlight members. Honestly, creating a stage with rain is like a gamble for producers of a music show. It’s only for teams we really love and support.” Because Lee Gikwang was an “Inkigayo” MC at the time and Highlight (BEAST) was a top idol group, the CP decided to put in everything they could into Highlight’s stage. 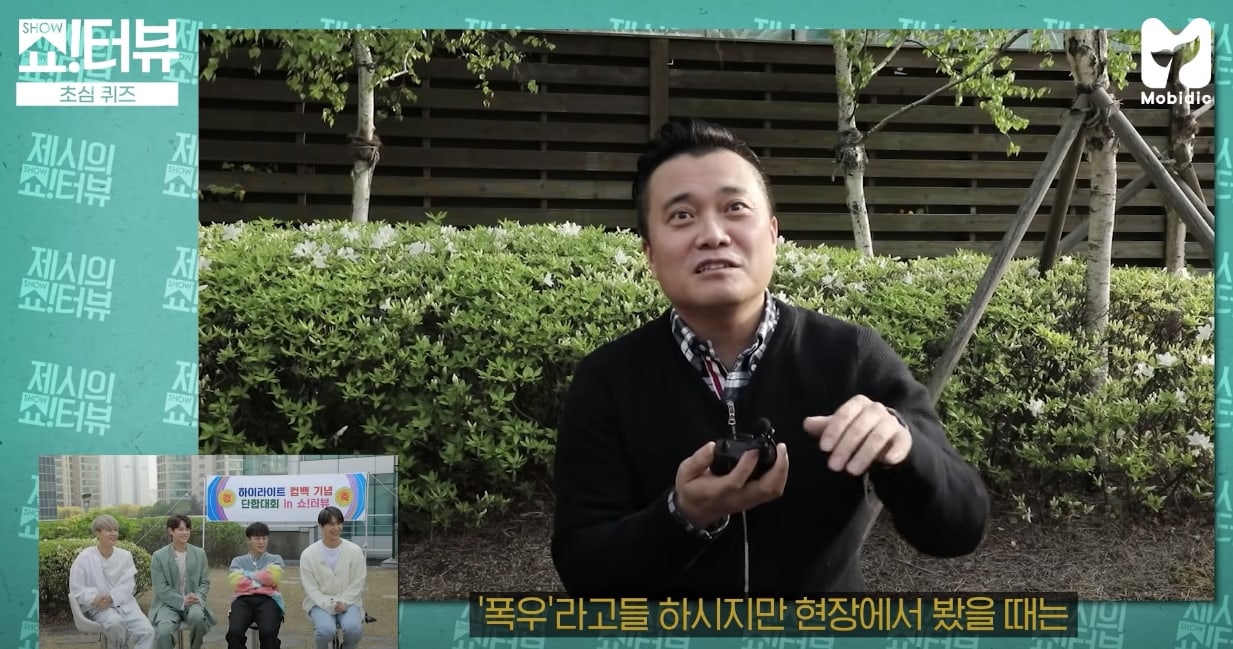 CP Kwak Seung Yong revealed that he didn’t know so much water would pour on them until he saw the actual performance. He commented, “A lot of people are saying it was ‘pouring,’ but in real life, it was more like a waterfall. We were surprised, and the members were surprised. We didn’t know it would be to this extent. But [the members] did their best, and the fans also enjoyed it and liked it.”

In response, Lee Gikwang said, “Thank you so much for allowing us to provide joy with my memes and Yoseob’s memes. If we get the chance, it would be great to do a 2021 version of ‘On Pouring Days.'” Yang Yoseob added, “This time, we won’t act cool.”

Watch the full interview with English subtitles below (relevant part starts at 25:10)!

Highlight returned with their third mini album “The Blowing” and title track “NOT THE END” earlier this month. Check out the music video here!

Also watch Yoon Doojoon in “Let’s Eat 3” with subtitles below:

Jessi
Highlight
How does this article make you feel?