SBS has released exciting new stills from its upcoming third season of “The Penthouse“!

The hit SBS drama centers around a luxury apartment complex reserved for those at the top of the social pyramid. It focuses on a group of women pursuing revenge who will stop at nothing to protect their children.

The newly released photos from “The Penthouse 3” feature Kang Ma Ri (Shin Eun Kyung) and Go Sang Ah (Yoon Joo Hee), who are adjusting to their new life in prison. Kang Ma Ri is a nouveau riche who has been living a double life as a professional scrubber who scrubs down bathers in a public bathhouse. Go Sang Ah is a former announcer who would sacrifice anything and everything for her husband Lee Gyu Jin (Bong Tae Gyu) and son Lee Min Hyuk (Lee Tae Bin).

The two incredibly greedy characters are people who resort to any means necessary to get what they want in terms of money and power. Once the truth was revealed that they disposed of the body of Shim Soo Ryeon (Lee Ji Ah)’s daughter Min Seol Ah (Jo Soo Min) and covered up her death, they were both sentenced to a year and six months in prison.

The best friends are now living a completely different lifestyle than what they’re used to, and they show off a unique chemistry while in prison. In the stills, the ladies get into an argument over a snack that Kang Ma Ri had a hard time retrieving and was therefore trying to hide. While hand-washing some clothes in the bathroom, Go Sang Ah notices Kang Ma Ri and approaches her. Kang Ma Ri seems to be offering her the snack, but she then points a finger at her friend’s chin in the next photo, making viewers question what kind of scuffle the two could possibly get into while in prison. 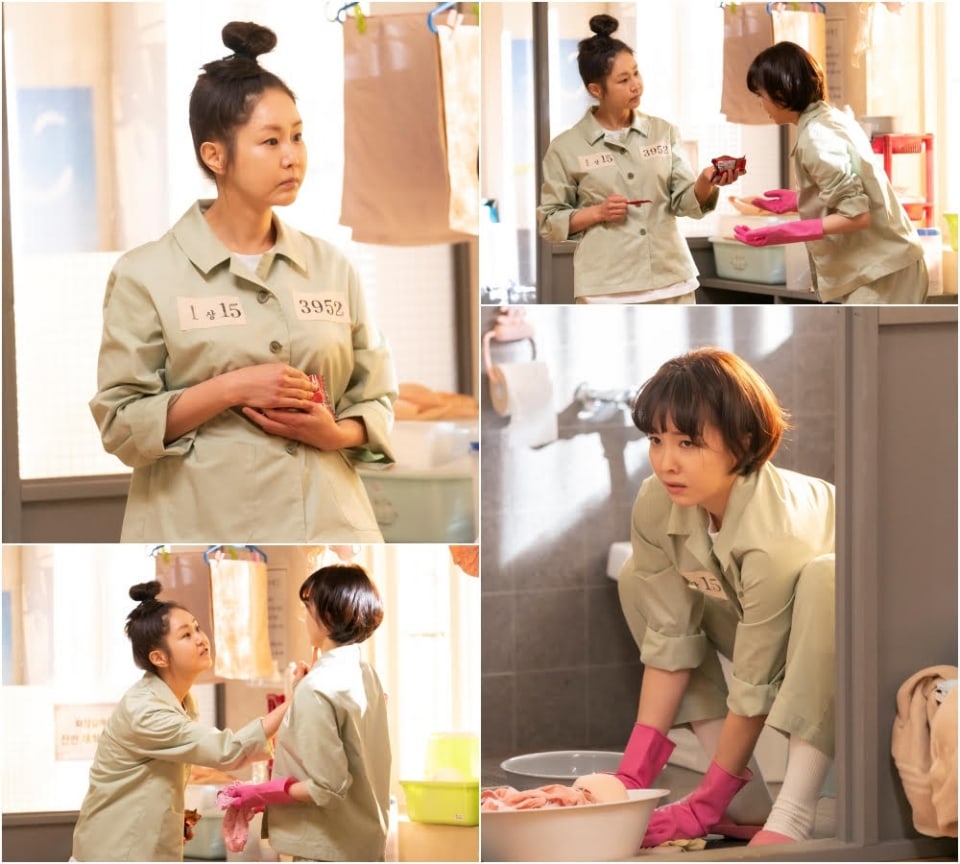 After bringing both laughs and tears to viewers through Seasons 1 and 2, Shin Eun Kyung and Yoon Joo Hee reportedly remain scene stealers in the upcoming Season 3. Especially for scenes like this one, where they must bicker back and forth, the two actresses are said to have prepared diligently to make things as realistic as possible by encouraging and being considerate of one another.

The producers commented, “Shin Eun Kyung and Yoon Joo Hee are actresses who are role models on set due to their professionalism, their incredible focus that ensures they don’t miss anything, and the ideas and passion with which they express their characters. Please tune in to ‘The Penthouse 3’ to find out what kind of surprises Kang Ma Ri and Go Sang Ah will deliver.”

“The Penthouse 3” premieres on Friday, June 4.

Start watching Season 1 of “The Penthouse” below!

Yoon Joo Hee
Shin Eun Kyung
The Penthouse 3
How does this article make you feel?