Previously, Ryan Reynolds responded to a tweet on Stray Kids’ homage to “Deadpool” in their performance on “Kingdom: Legendary War.”

Bang Chan, who has often mentioned being a huge fan of Ryan Reynolds, expressed his excitement through his V LIVE broadcast on May 24. “I did not expect ‘the one,’ the almighty one, the Ryan Reynolds to see our performance. That was actually crazy.” He continued, “You guys know that I really, really like Ryan Reynolds,” said he has been keeping up with all of his work, and added with a laugh, “Yes, I would like an autograph.”

He concluded, “To be noticed by someone that you really, really admire and someone that you really think of as a role model just hits different. I am very, very happy, and I think I can die peacefully now. Thank you so much, Ryan Reynolds. If you ever come visit Korea, I will definitely buy some delicious food, so feel free to hit me up.”

After hearing news of the broadcast, Ryan Reynolds uploaded a photo with an autographed bottle of gin from Aviation American Gin, a company which he is a co-owner of. He wrote, “First, I have your autograph right here, Bang Chan. Will send to you this week. Second, as a new Stray Kids fan, can I get an autograph?”

First, I have your autograph right here, Bang Chan. Will send to you this week.

Ryan Reynolds additionally posted the photo on his Instagram Stories and reacted to a screenshot of Bang Chan’s profile on bubble, a messaging app that Stray Kids uses to communicate with fans. 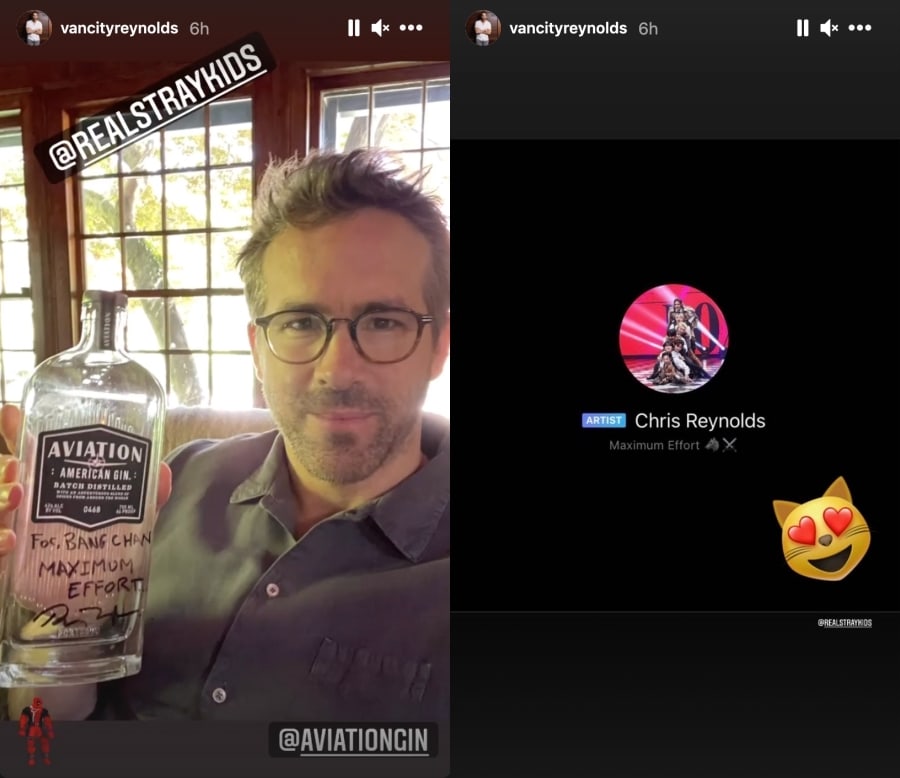 In response to a post from the official account of the “Deadpool” movie about allowing the non-official merchandise that Bang Chan wore during his V LIVE broadcast, Ryan Reynolds commented, “Let’s get him a real mask.”

Let’s get him a real mask.

Stray Kids
Ryan Reynolds
Bang Chan
How does this article make you feel?