The final battle is here! Episodes 13-14 of “Taxi Driver” are so packed with action and thrill that we were left breathless throughout the entire chapter. Kim Do Gi (Lee Je Hoon) and his crew are faced with their biggest and most dangerous challenge yet as they’ve not only incurred the wrath of the ultimate boss villain, but Rainbow Taxi’s prisoners are on the loose as well and equally vow to take revenge. Without further ado, here are six memorable action scenes from the drama’s gripping penultimate episodes.

Fire in the embassy

Baek Sung Mi (Cha Ji Yeon) was a shady character since the very beginning and there were many moments throughout the drama that had us question her real intentions. Now that she let the cat out of the bag after betraying Rainbow Taxi in episode 12, we finally get to see her true colors in full, and they are much deeper and darker than one might have expected. 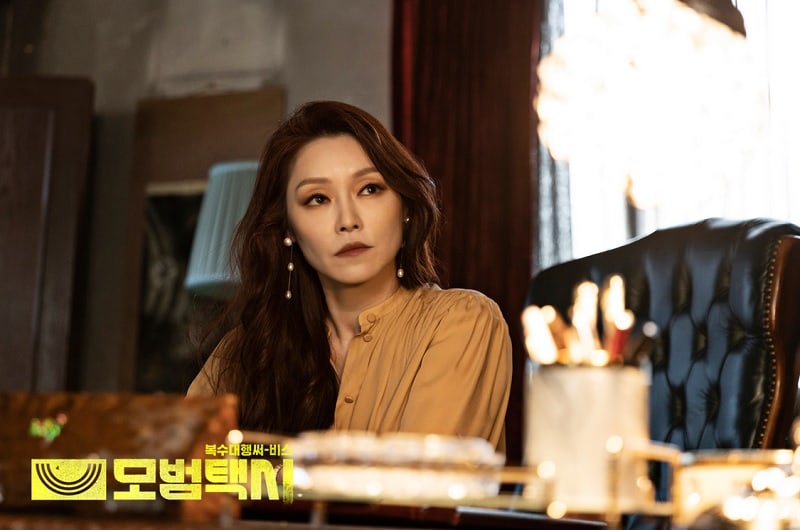 Kim Do Gi and his team are in a hurry to take the prisoners back before a disaster happens. Thanks to her hacking skills, Ahn Go Eun (Pyo Ye Jin) successfully locates Baek Sung Mi’s safe spot, which is none other than the Embassy of the Bahamas. But the Kim Do Gi we know never shrinks back, and so he boldly invades the embassy, equipped with smoke grenades. While the fire alarm goes off and everyone rushes outside, Do Gi nonchalantly walks through the smoke in true Batman fashion, until he discovers Goo Young Tae (Lee Ho Chul) and engages in a fight with him. Despite the latter’s strong built, the former special forces officer subdues him with confidence and ease. It’s not the embassy that’s on fire, it’s Kim Do Gi! 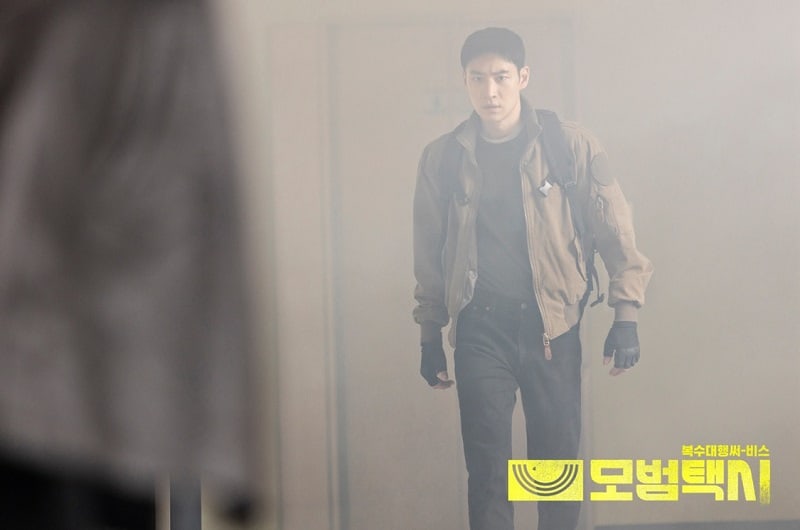 Fight in the dark

Rainbow Taxi’s boss Jang Sung Chul (Kim Eui Sung) attempts to strike a deal with Baek Sung Mi and demands the prisoners back in exchange for Goo Young Tae. However, Baek Sung Mi betrays them once again as she unleashes the prisoners on Kim Do Gi instead of handing them over. But their attempt to take revenge on Do Gi goes south when Kang Ha Na (Esom) and the police suddenly appear at the scene.

Consequently, Baek Sung Mi and her men infiltrate Jang Sung Chul’s home and take him as well as Choi Kyung Goo (Jang Hyuk Jin) hostage in order to threaten Do Gi into surrendering. The tricky situation made me really anxious since the evil loan shark lady is definitely capable of badly hurting our vigilantes. Furthermore, Baek Sung Mi’s minions as well as one of the prisoners, a U Data employee, were waiting for Do Gi to show up so that they could kill him. 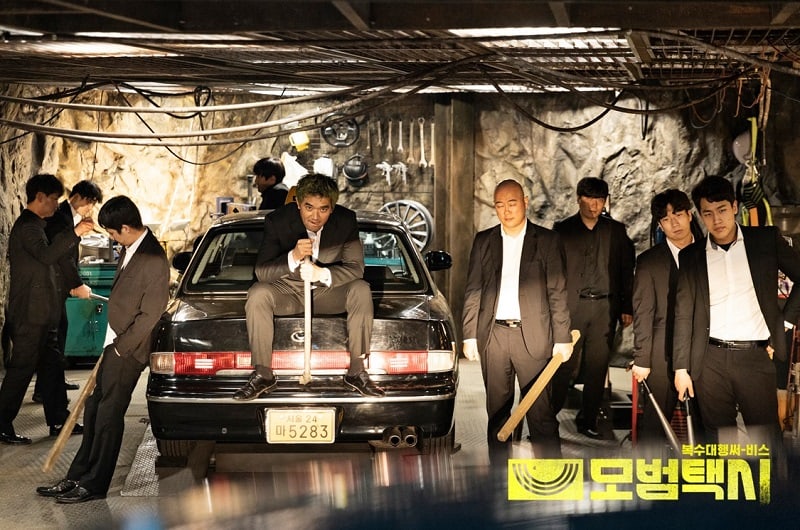 One against a dozen – the situation doesn’t look very optimistic at first glance. Our glasses model Kim Do Gi sports yet another new pair when he appears in front of the gang, but this time, it’s more about the functionality than the look, for these are night vision glasses. In the end, Do Gi wins with wits and resources as he turns off the lights and knocks everyone down in a uniquely filmed fight scene that will certainly be remembered for a long time.

Another prisoner on the loose, the employee who worked at the fermentation factory during Rainbow Taxi’s very first case is obsessed with his victim and thus approaches her again. Ahn Go Eun rushes over to save the poor girl on her own, yet ends up getting kidnapped by her sister’s ex-boyfriend Choi Min (Seo Han Gyeol) who brings her to his filming set. It’s really hard to comprehend how this guy can have the audacity to target Go Eun after what he did to her sister. Notwithstanding Jang Sung Chul’s reforming efforts, he still doesn’t seem to have even an ounce of remorse.

Thankfully, Kim Do Gi arrives right in time to deliver refreshing revenge before Choi Min can do any serious harm. This time, Do Gi upgrades his weapon and opts for a nail gun to punish the guy in the most painful way. Talk about creativity!

Do Gi is so enraged that he’s not far from killing Choi Min, but Go Eun stops him and makes him come back to his senses. When Do Gi sees the crying Go Eun who is still under shock, he affectionately hugs her and comforts her. This lovely scene amidst all the action made it once again evident what a kind and caring soul the man is beneath his cold appearance. We want more of soft Do Gi! 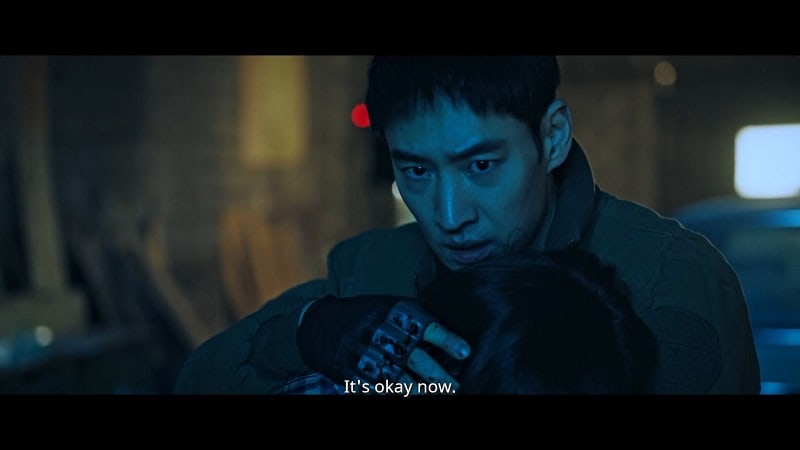 Now we’re getting to the biggest shocker of these episodes. The much-despised white truck of doom we K-drama fans are all too familiar with does a cameo in “Taxi Driver” and hits Park Jin Uhn (Bae Yoo Ram) right in front of Do Gi’s and Go Eun’s eyes. At the wheel is the owner of the fermentation factory, who plans to take Do Gi out yet mistakes the engineer for Do Gi. Park Jin Uhn is so badly hurt that he’s on the verge of dying, which fuels Do Gi’s rage and brings it to the maximum. The culprit tries to flee, but the vigilante shows his unraveled driving skills and makes the truck turn over, even if he has to put his life at stake.

Next to all the sleek and cool action we get to enjoy in these episodes, Lee Je Hoon also presents us with yet another award-worthy (or rather awards-worthy) emotive scene that is bound to tug at your heartstrings. Seeing Kim Do Gi hovering over Park Jin Uhn who is losing his consciousness was utterly heartbreaking. Let’s hope that the engineer will be back alive in the final episodes! 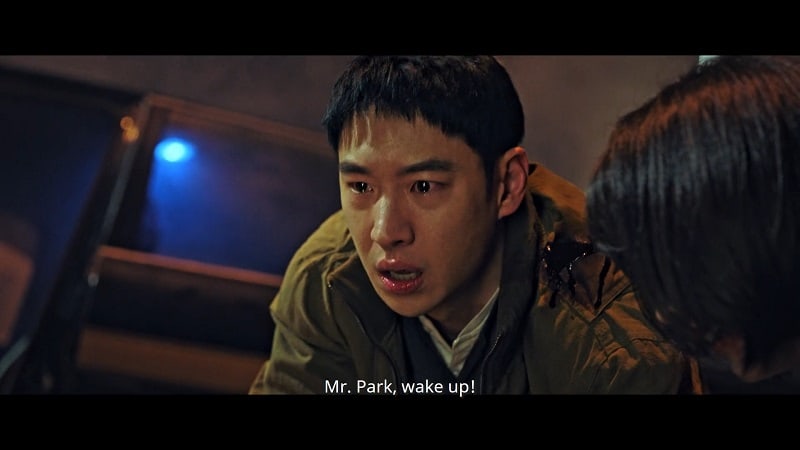 The path to Baek Sung Mi

Finally, it’s time to face the ultimate boss, Baek Sung Mi, who retreated to her private prison together with her hostages. Do Gi arrives, still in his highly enraged state that renders him even stronger, and fights his way through her numerous minions with power and determination.

Actually, the behind-the-scenes clip of this tense fight is just as worth-watching as the actual scene in the drama! It gives you a good impression of how hard Lee Je Hoon must have trained in order to be able to show us such smooth moves. It’s also really cute how impressed Cha Ji Yeon is by his stunts. We feel you, girl!

When Do Gi eventually stands in front of Baek Sung Mi, though, he has no other choice but to give in and kneel down in order to save Jang Sung Chul and Choi Kyung Goo, who are being threatened with knives. But all is not lost, for when the loan shark lady walks past Do Gi, he suddenly grabs her and takes her hostage instead. Like this, Jang Sung Chul and Choi Kyung Goo can successfully escape. 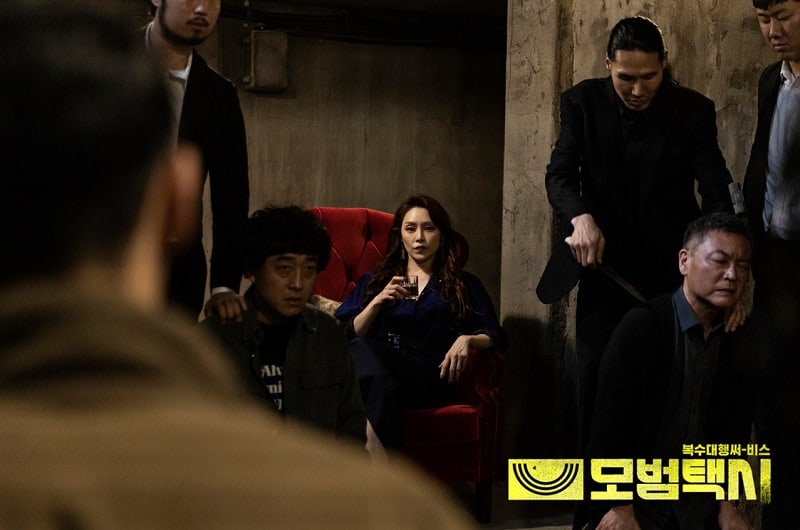 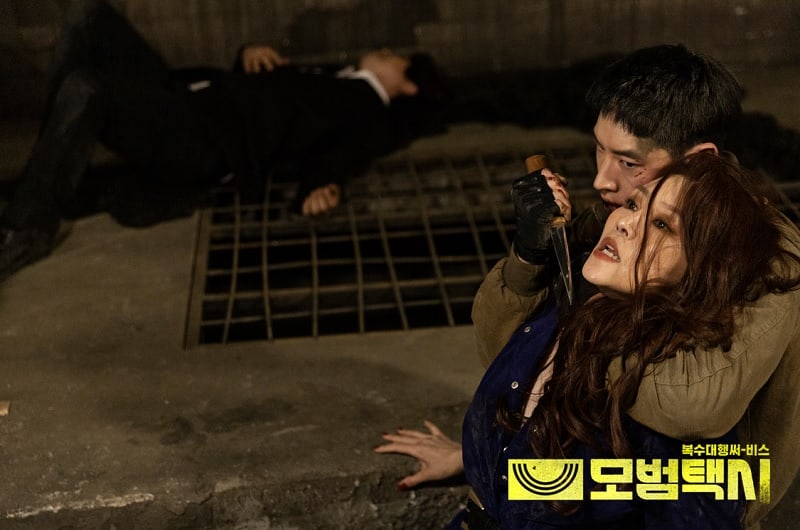 Baek Sung Mi’s men manage to free her from Do Gi’s hands, and the loan shark lady proceeds to take to her heels. But Do Gi stays tenacious till the bitter end and snatches a police car to follow her. Luckily, he arrives at the port before she can take off, and shows us one more time what he can do with his car while shaking off Baek Sung Mi’s minions.

Baek Sung Mi realizes that she has lost and asks Do Gi to just kill her already. Do Gi, though, remains rational and eventually hands her over to Kang Ha Na. Naturally, the prosecutor is wondering if he has come to trust the law, and Do Gi responds that while his stance hasn’t changed, he does believe in her. 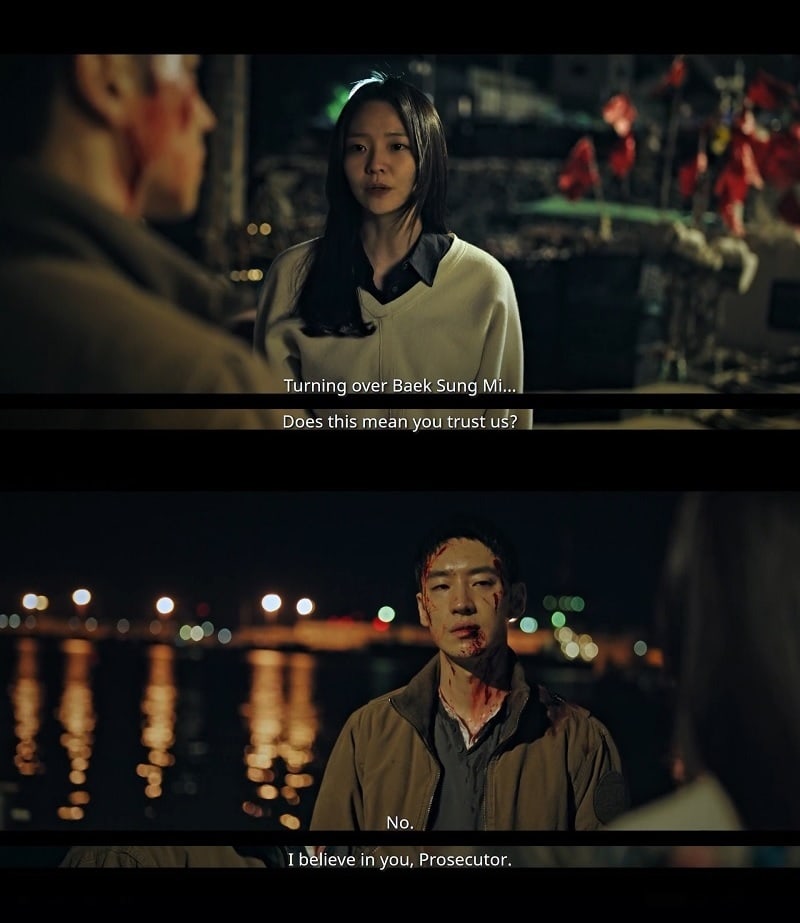 Now we can finally breathe again. Hopefully, since the villains are now in Ha Na’s hands, we’ll be able to see her, aka the law, win against them in the final episodes. These evildoers truly need to get the punishment they deserve. And I’m really eager to see what kind of ending will await the Rainbow Taxi crew. It’s hard to imagine a good ending for lawbreaking vigilantes, but there’s still hope!

Hey Soompiers! Which is your favorite action scene from episodes 13-14 of “Taxi Driver”? And what are your predictions on the ending? Let us know in the comments below!

Currently watching: “Mad for Each Other,” “Youth of May,” “Taxi Driver,” “Miss Crow with Mr. Lizard”
All-time favorite dramas: “Move to Heaven,” “Children of Nobody,” “My Ahjussi,” “Ode to Joy,” “Back in Time,” “From Survivor to Healer”
Looking forward to: “Hospital Playlist 2,” “The Devil Judge,” “My Dear Guardian,” “The Oath of Love“