Love And Sacrifice: 8 Touching Moments From “Youth Of May”

“Youth of May” whisked us into a fairytale – and brutally brought us back to reality. It turned out to be a heart-wrenching yet beautiful story of ordinary youths who all became heroes in their own ways when faced with an extreme situation. The sacrifices and pains of the real people who suffered through the Gwangju Uprising in May 1980 mustn’t be forgotten, and “Youth of May” did an excellent job at reminding us about this.

The drama emptied our tear ducts but also filled our hearts with warmth, which makes the withdrawal even harder to bear. Since it’s still too early to move on, let’s revisit eight moments from “Youth of May” that touched our hearts.

Warning: spoilers on the drama below.

After failing to save a now comatose friend, Hwang Hee Tae (Lee Do Hyun) is ridden with so much guilt that he’s unable to practice as a doctor anymore. When he follows Kim Myung Hee (Go Min Si) to an orphanage she volunteers at and is asked to do check-ups on the children there, a girl suddenly falls sick and brings back Hee Tae’s memories of the traumatic experience. Myung Hee, who recognizes the deep pain he’s been hiding in his heart, proceeds to comfort him with words he desperately needed to hear. It becomes evident that her words marked him for life when he tells a young doctor the same thing 41 years later. It’s just beautiful how Myung Hee’s positive influence on Hee Tae still reaches more people even many years after her death. 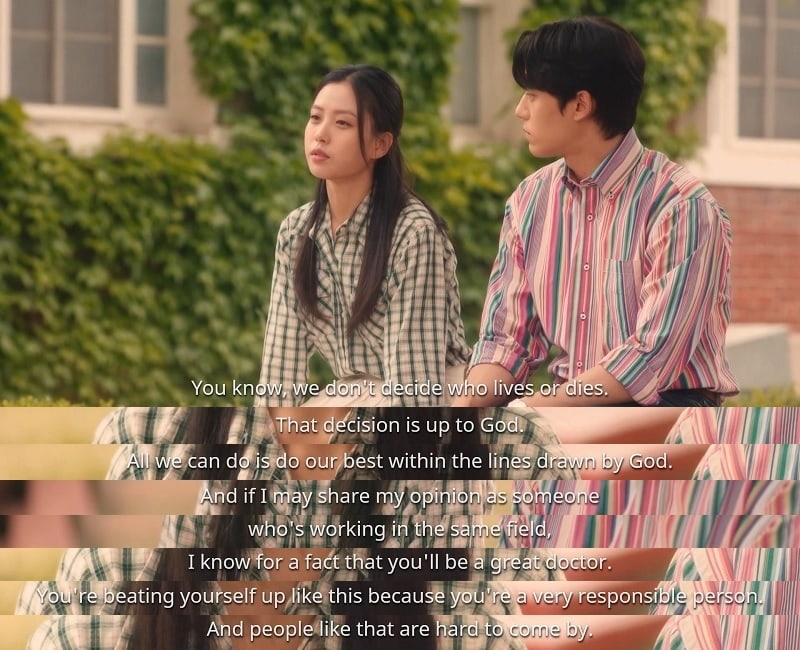 When Soo Chan begs Myung Hee to let him help her

I’m usually not very fond of love triangles, but the love triangle in “Youth of May” was done tastefully. Kim Myung Hee and Lee Soo Chan (Lee Sang Yi) neither had enough screen time together to make us root for them over the OTP nor did Soo Chan turn into a jealous villain who tries to break the couple apart. He proves again and again that he’s a truly kindhearted soul who genuinely cares for Myung Hee and just wants the best for her. They simply weren’t meant to be, and while this realization naturally makes him suffer, he comes to accept it.

After Soo Chan tells Hwang Ki Nam (Oh Man Seok) about Hee Tae seeing a woman despite being engaged to his sister, he ends up being tormented for causing harm to Myung Hee. As a result, he tries everything in his might to set things straight and offers to help her. But Myung Hee declines. While Soo Chan never forces his feelings on her, his love and desperation come to the surface for a short moment during this conversation. When tears started rolling down Soo Chan’s face, I cried with him before I could realize it. 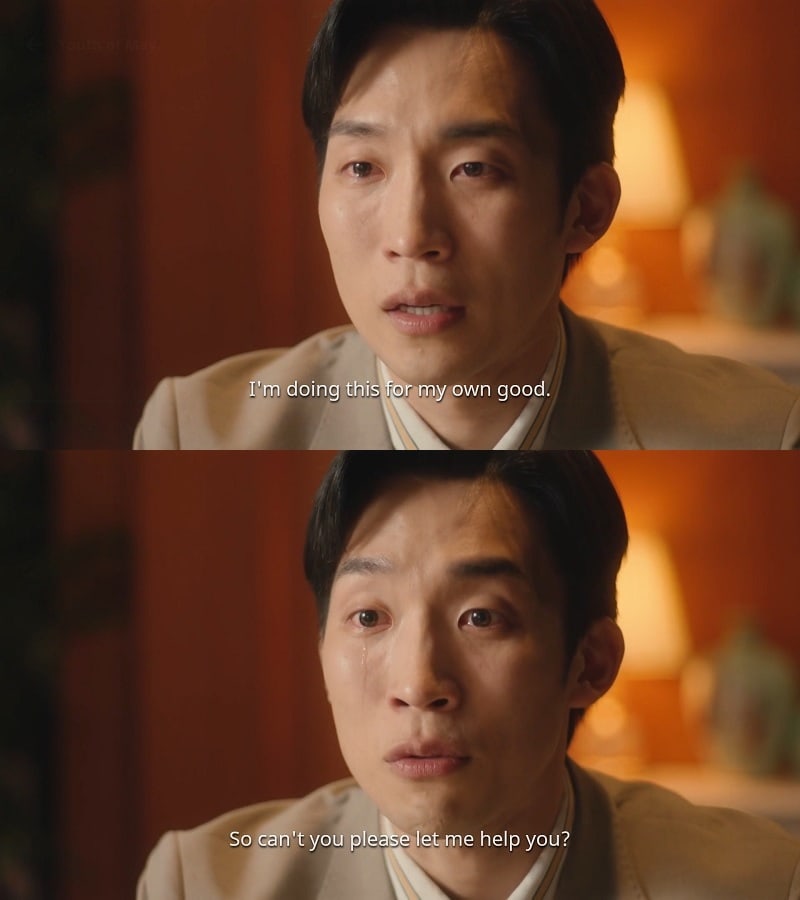 Police officer Choi Jung Haeng (Jung Wook Jin) has a really cute crush on Lee Soo Ryun (Geum Sae Rok). When he sees her in a group of people that were caught by soldiers, he helps them flee while the soldiers are away for a little while. Despite saying otherwise to Soo Ryun, he can’t be sure to be saved after what he did, and he’s certainly fully aware of it.

While his crush on Soo Ryun might have helped him gather his courage, it’s too far-fetched to assume that he was so deeply in love with her that he was willing to put his life on the line for her safety. Therefore, it’s rather his love for the people that must have motivated him. Unwilling to see innocent people die, he gave his own life in order to save a few. 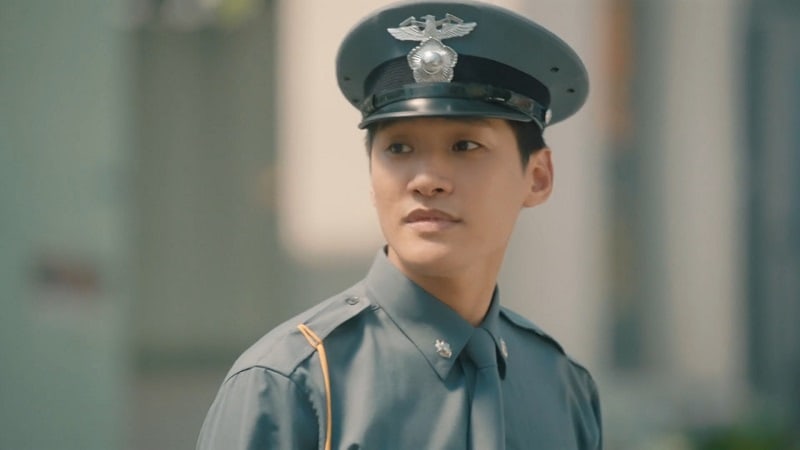 When Kyung Soo defends his actions

Hee Tae’s friend Kim Kyung Soo (Kwon Young Chan) has probably the hardest lot among all characters as the former student activist is doing his military service right when the Gwangju Uprising happens. He is being forced to shoot rebels and is thus utterly conflicted. But after running into Hee Tae, he remembers how the latter told him before that he likes him because he’s strong, and therefore he finally takes the courage to defy his supervisor. Thanks to his bravery, at least one life was saved. It makes one wonder, could history have been different if there had been more people like Kyung Soo? 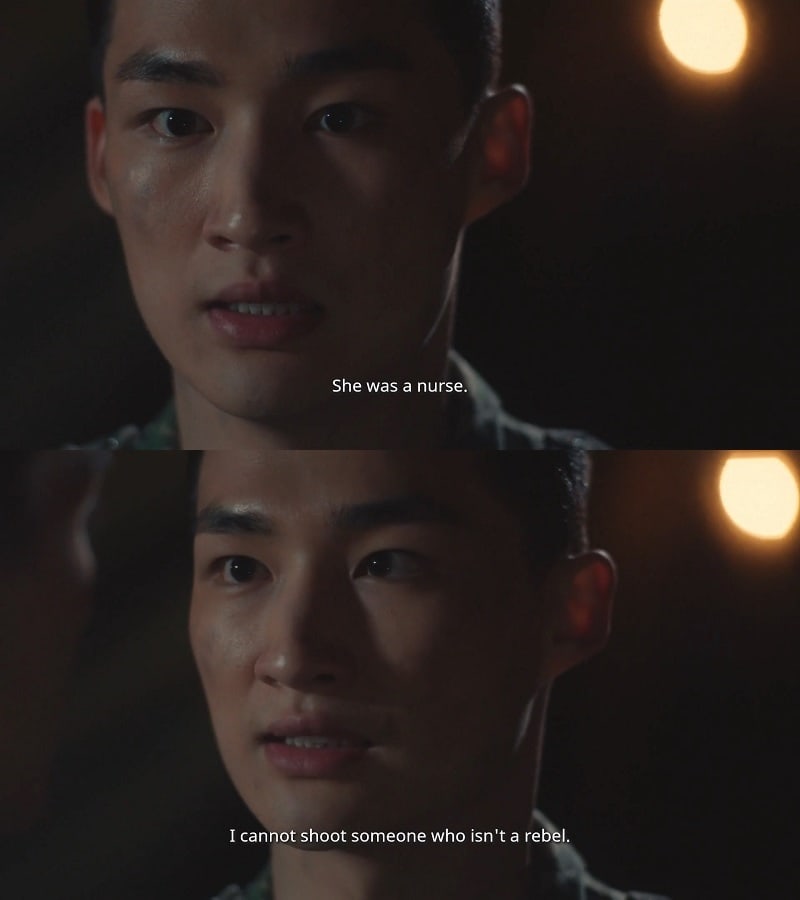 When Hye Gun sacrifices himself

Jung Hye Gun (Lee Kyu Sung), who is a core figure among the student activists, is taken away by Hwang Ki Nam and is tortured. When Hwang Ki Nam eventually threatens him with the lives of his family members, Hye Gun makes a drastic decision. He recalls what his friend Hee Tae told him about his father and mentions Hee Tae’s name in front of him, which results in Hye Gun being beaten to death.

It was utterly heartbreaking to see Hye Gun sacrifice himself than ratting out his comrades. With his brave decision, he not only proved his boundless loyalty but also helped bring Hwang Ki Nam down. 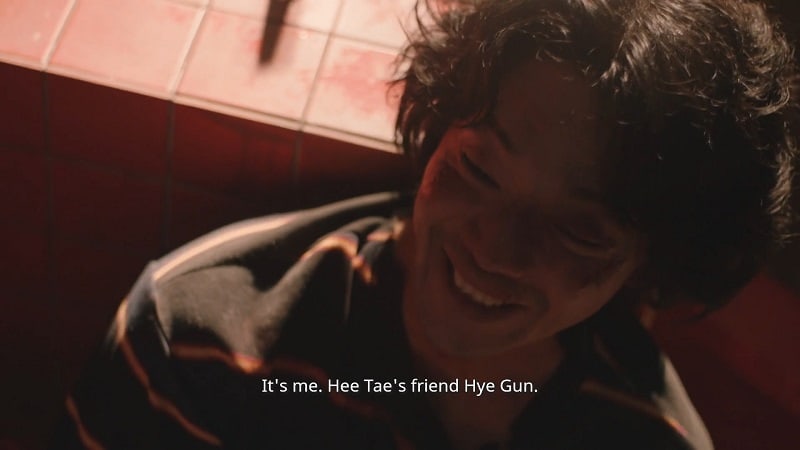 When Jung Tae tries to save Myung Hee

Hee Tae’s little brother Jung Tae (Choi Seung Hoon) overhears that his father is plotting to kill Myung Hee. Outraged, he rushes over to Myung Hee and tries to stop the guy who is attempting to shoot her. It’s hard to even phantom how much courage must be needed for a young kid to jump into such a dangerous situation. He was clearly aware of what he was getting himself into as he had already realized what a cruel person his father is and even feared him. With his actions, Jung Tae showed that he has a kind heart and is (luckily) completely different from Hwang Ki Nam. 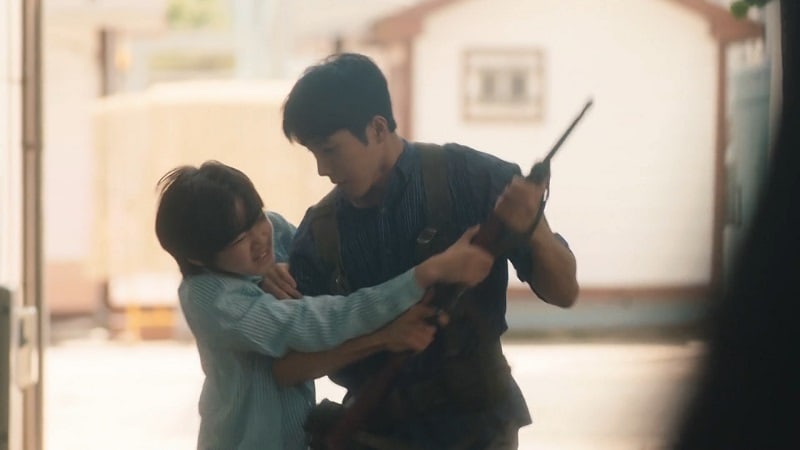 When Soo Chan’s dad gives his son the keys

Soo Chan, who was never concerned with the political circumstances, undergoes a drastic change. Inspired by his sister, who always made the people her first priority and kept fighting alongside student activists, he tries to save an innocent boy from soldiers but ends up getting arrested and tortured. This is when he finally realizes the cruelty and absurdity of the ongoing situation and changes. He decides to contribute whatever he can and helps his sister steal goods from their company’s warehouse. However, their dad catches the two red-handed. When Soo Chan tries to explain himself, his dad surprisingly gives him the keys to all their storerooms. Their entire family has such beautiful hearts! 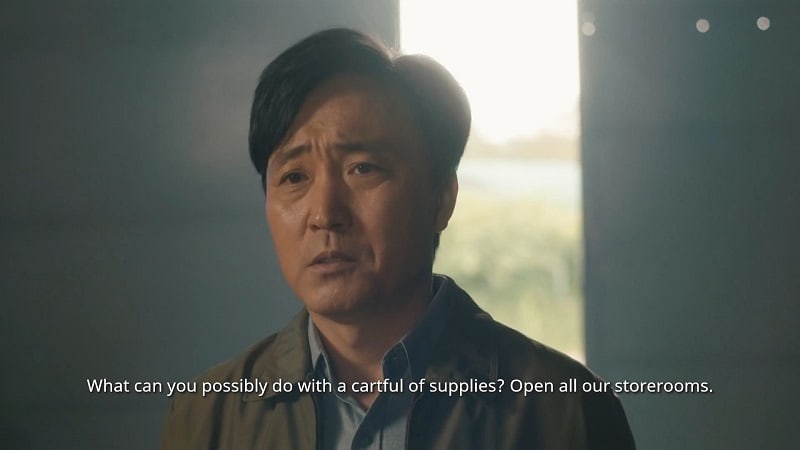 After 41 long years of painful searching and waiting, Myung Hee’s skeleton is eventually found, and Hee Tae (played by Choi Won Young), who is now a professor of Emergency Medicine, finally gets to read the marriage vow that Myung Hee wrote. 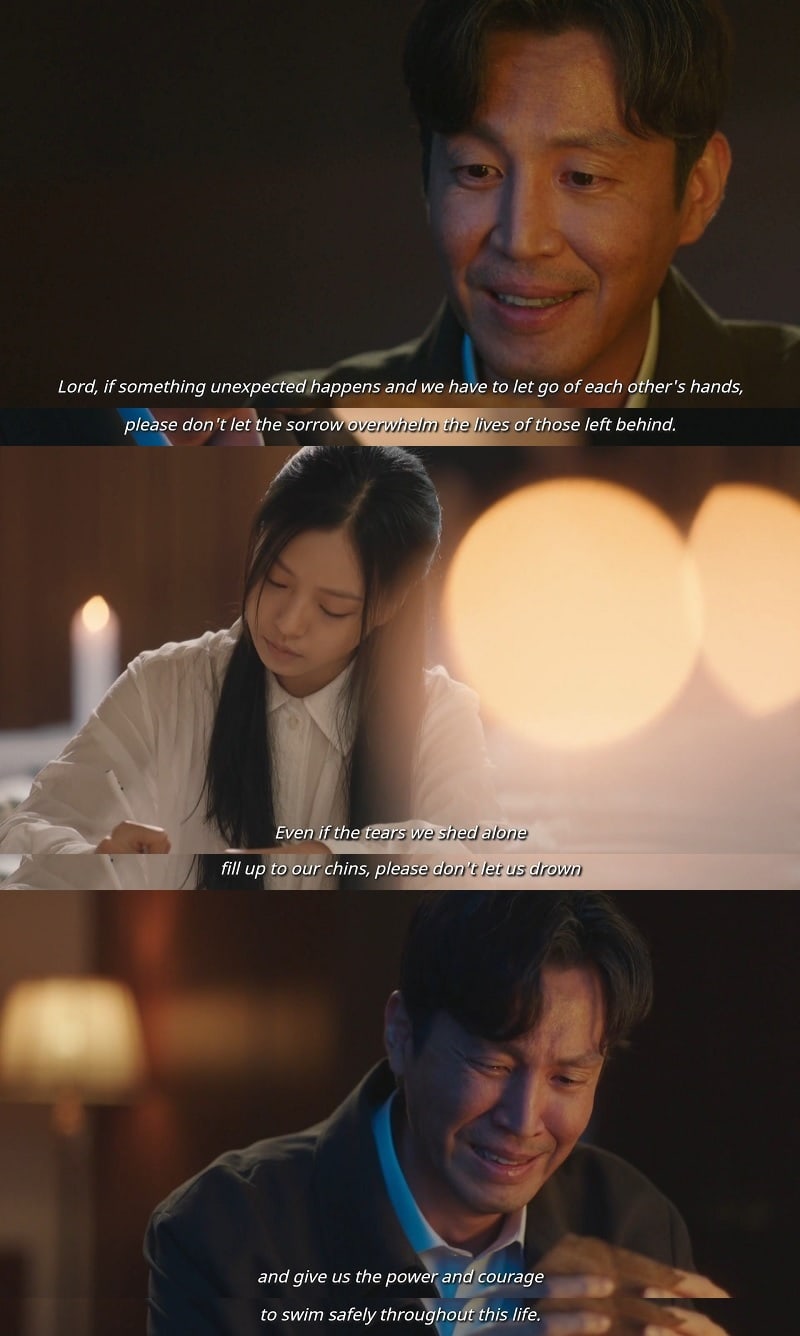 Hee Tae’s long journey of suffering impeccably illustrates how the tragic incident of May 1980 still affects the survivors in the present, and makes us empathize with the real victims. Thanks to Myung Hee’s vow, Hee Tae is finally able to find closure and can start a new chapter in his life. While he is aware that the past will continue to haunt him, he has gained new motivation to keep going by wanting to fulfill Myung Hee’s wish.

Hey Soompiers! Which moments from “Youth of May” touched your heart? Let us know in the comments below!

Currently watching: “Mad for Each Other,” “The Rebel,” “My Dear Guardian”
All-time favorite dramas: “Move to Heaven,” “Children of Nobody,” “My Mister,” “Ode to Joy,” “Back in Time,” “From Survivor to Healer”
Looking forward to: “Hospital Playlist 2,” “Nevertheless,” “The Devil Judge,” “The Day of Becoming You”