Watch: “At A Distance Spring Is Green” Cast Enjoys Each Other’s Company During Poster Shoot

KBS 2TV’s “At a Distance Spring is Green” has released a behind-the-scenes look at the drama’s poster shoot!

Based on a popular webtoon, “At a Distance Spring is Green” is a drama about the realistic struggles of college students facing the harsh realities of a tough world. Park Ji Hoon will star as Yeo Joon, a handsome and popular student from a wealthy family who seems to have it all, but secretly harbors a painful emotional wound. Kang Min Ah will star as Kim So Bin, an ordinary student who works hard, but struggles to achieve the results she longs for.

At the beginning of the video, Park Ji Hoon confessed that he had been worried because it had rained that day, but thankfully the weather ended up being clear. He cutely motioned towards the set, inviting the camera to follow him. Park Ji Hoon then posed next to the lake, squinting in the sunlight but managing to pull off a relaxed pose. 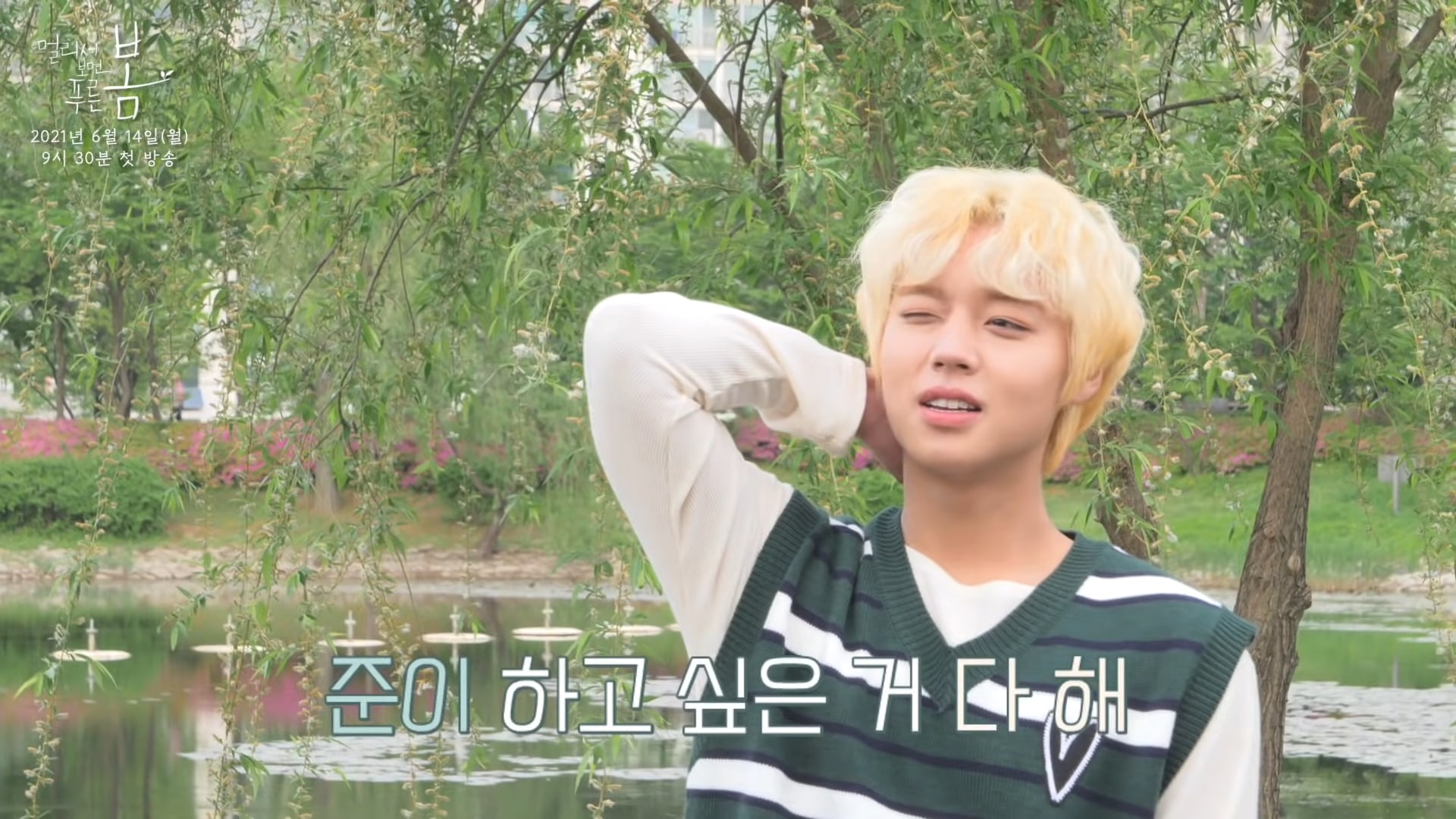 Next, Kang Min Ah also expressed her relief that the rain had stopped before the shoot and confidently said, “The poster will end up being pretty.” Kang Min Ah sported a sweet smile for her photo shoot, tucking her hair behind her ear as she posed for the camera. Bae In Hyuk also greeted the camera, explaining that they had come to a park for the photo shoot but he didn’t know what park it was. When Choi Jung Woo introduced himself he also mentioned the clear weather, before adding humorously, “There’s plenty of pollen.”

When the actors gathered together to talk, Kang Min Ah joked that only Park Ji Hoon’s photos would turn out well since the rest of them were lying down. Eunbin noted that thankfully they would be able to lie down on the grass since the rain had stopped. Woo Davi said she would do her best to exude the cold and arrogant personality of her character Gong Mi Joo, even when lying down on the grass. 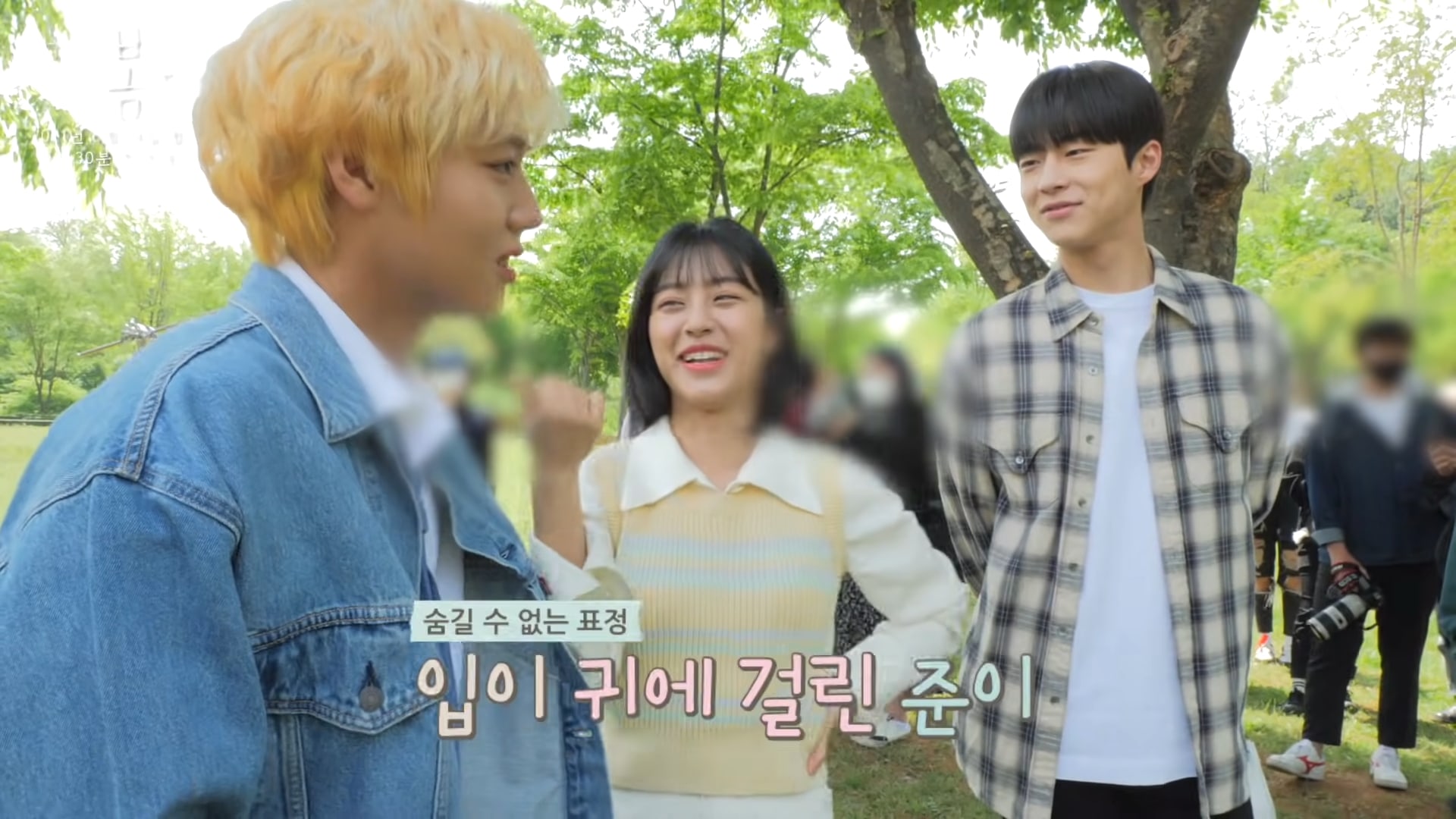 After all of the other actors were lying down on the grass, they jokingly started telling Park Ji Hoon to yawn or sneeze during the shoot. The laughs continued when Bae In Hyuk imitated the director’s deep voice before realizing it had all been caught on camera. He later approached the camera to complain, “How could you film me imitating the director?” but then lowered his voice to continue the joke.

When the group poster shoots finished, the actors took turns sharing their thoughts. Park Ji Hoon said, “The poster shoot was done in a bright way overall, but I feel like it was done similarly to the webtoon.” He continued, “I think I focused most on shooting the scene where we sparked some chemistry when I held the umbrella over her,” referencing the shoot he did with Kang Min Ah. 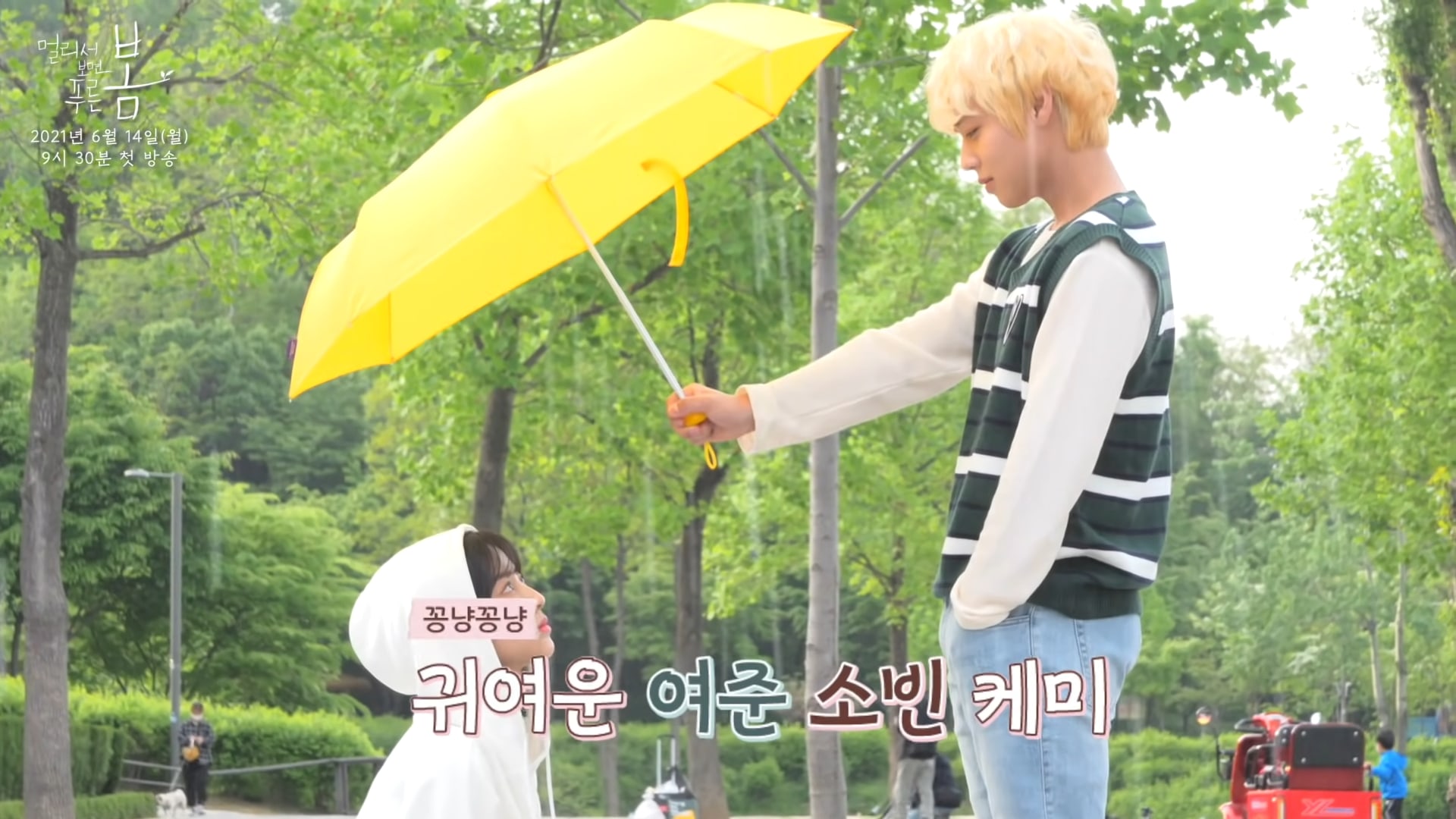 Kang Min Ah expressed her admiration for the photos that she caught a glimpse of after her photo shoot, saying they turned out beautifully. “I want to hurry up and see the poster myself. I think you’ll be able to figure some things out just by looking at it,” she added.

Bae In Hyuk commented, “For the group poster, we all shot it together in a circle, and for my poster with Park Ji Hoon we shot it with more of a friendship vibe. For my individual poster, I went for a more cold vibe that suited my character Nam Soo Hyun.”

Choi Jung Woo said, “We were all energized and happy being together. They’re all such wonderful people, so I’m very happy to be working on this drama together with them.” Eunbin shared, “We had a lot of fun shooting the poster together, so I think they’ll turn out wonderfully. Please tune in to our drama! Thank you.”

Woo Davi commented, “We wrapped up shooting in a comfortable manner, so I think they’ll all turn out really well. I’m excited.” The actors finished up the video by asking viewers to show lots of love and support for the drama.

“At a Distance Spring is Green” premieres on June 14 at 9:30 p.m. KST and will be available with subtitles on Viki!

In the meantime, watch a teaser below: