Lee Bo Young is ready to battle Ok Ja Yeon in the upcoming episode of “Mine”!

tvN’s “Mine” is a drama about strong and ambitious women who overcome society’s prejudices to discover what is truly theirs. Lee Bo Young stars as Seo Hee Soo, a former top actress and the wife of the second son of the chaebol family Hyowon Group. Kim Seo Hyung stars as Jung Seo Hyun, the elegant and well-born wife of the eldest son of Hyowon Group.

In the new stills for the upcoming episode, Seo Hee Soo and Kang Ja Kyung (Ok Ja Yeon), the birth mother of Seo Hee Soo’s son, draw attention as they sit next to their respective lawyers in the courtroom. Seo Hee Soo, who is carrying out a secret plan to escape from the clutches of the Hyowon family, appears resolute and determined. On the other hand, Kang Ja Kyung’s eyebrows are furrowed in distress, as if she has just been dealt an emotional attack. The completely opposite reactions of the two women are increasing viewers’ anticipation for their showdown in the courtroom. 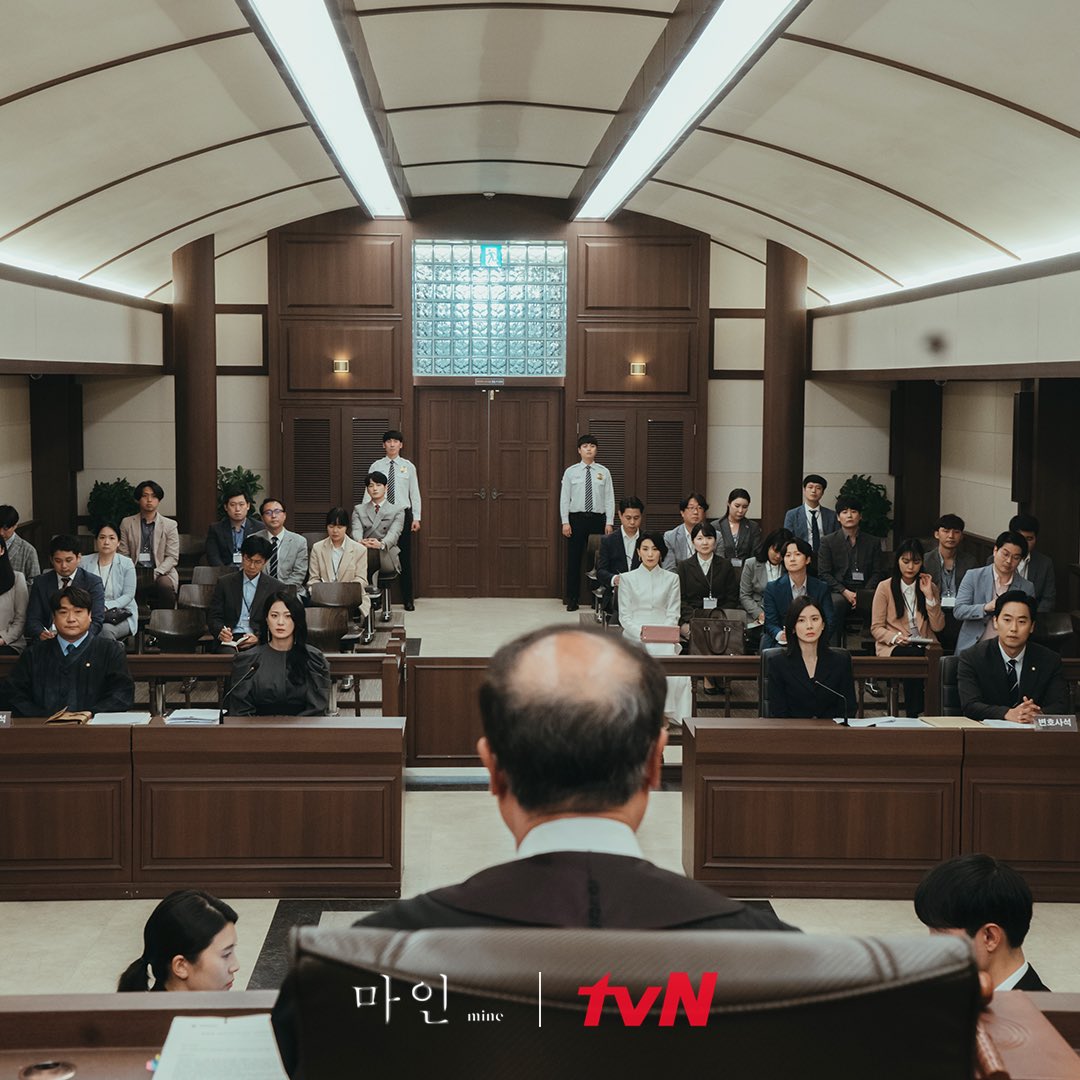 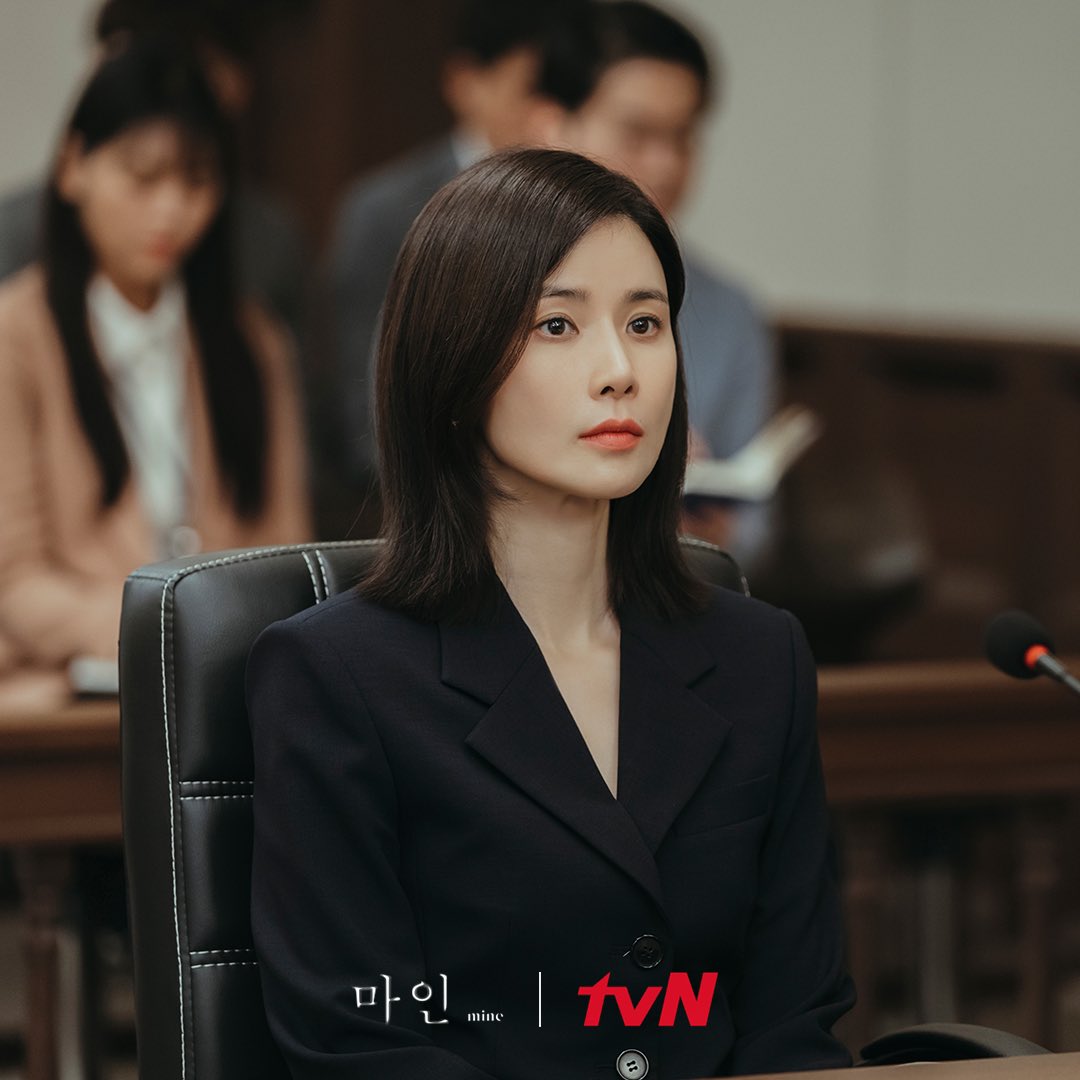 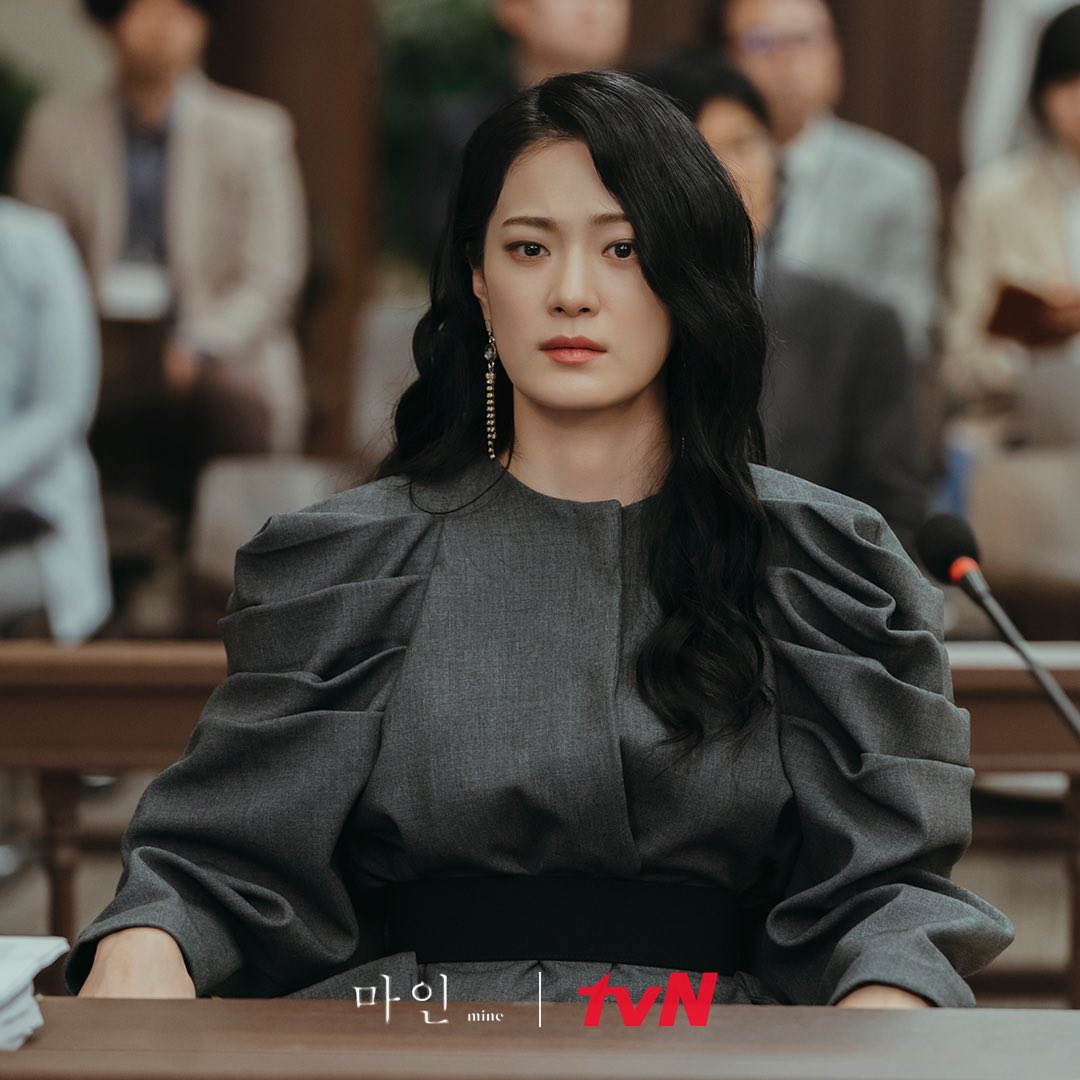 Seated in the gallery are Jung Seo Hyun and Han Ji Yong (Lee Hyun Wook), Seo Hee Soo’s husband. Jung Seo Hyun, who revealed Seo Hee Soo’s miscarriage and considers herself to be her supporter, observes the trial in a composed manner, but viewers are wondering what plan she could be cooking up inside her head.

Meanwhile, Han Ji Yong’s face is hard to read, and he appears almost like a third party in the courtroom instead of the main reason why both women ended up facing each other in court. 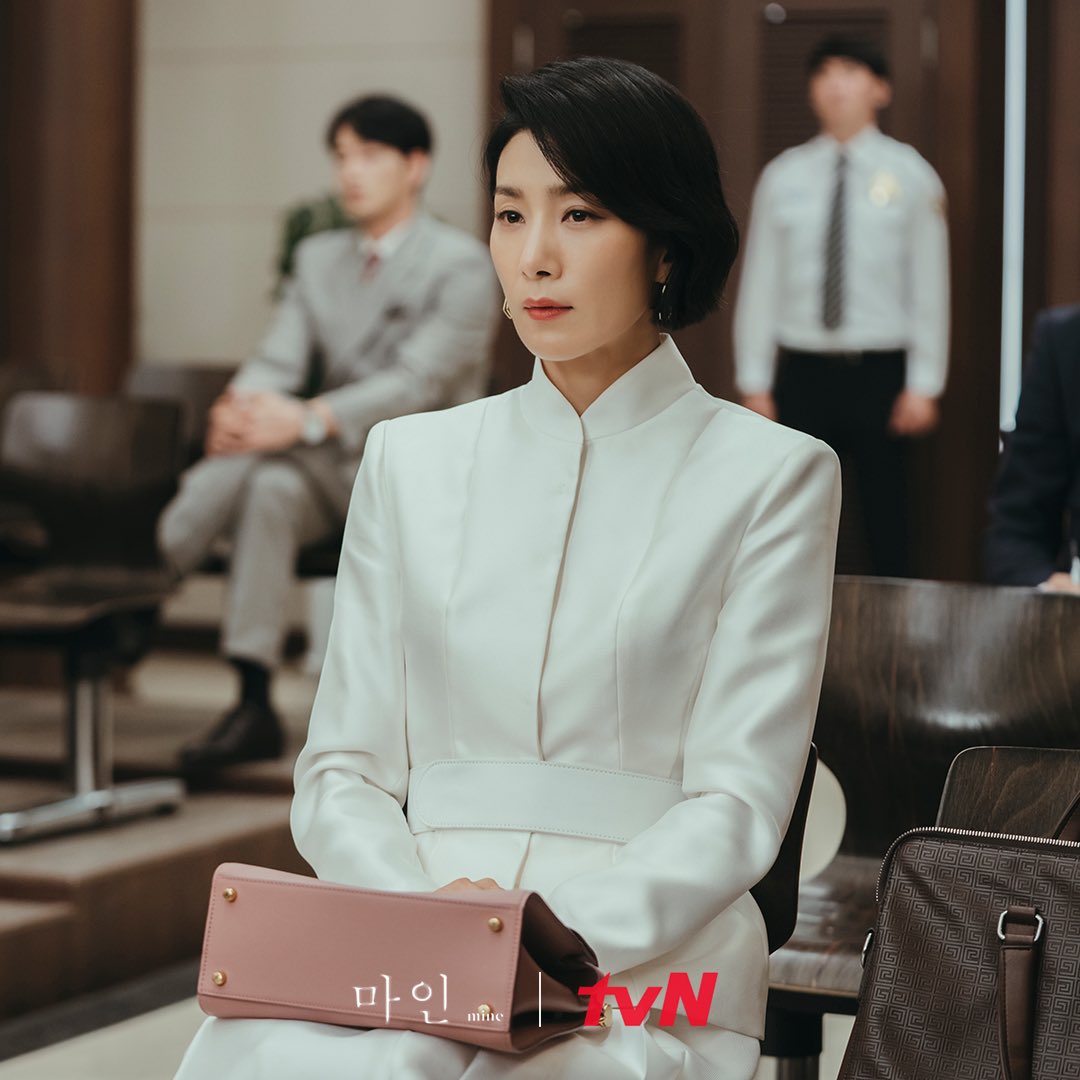 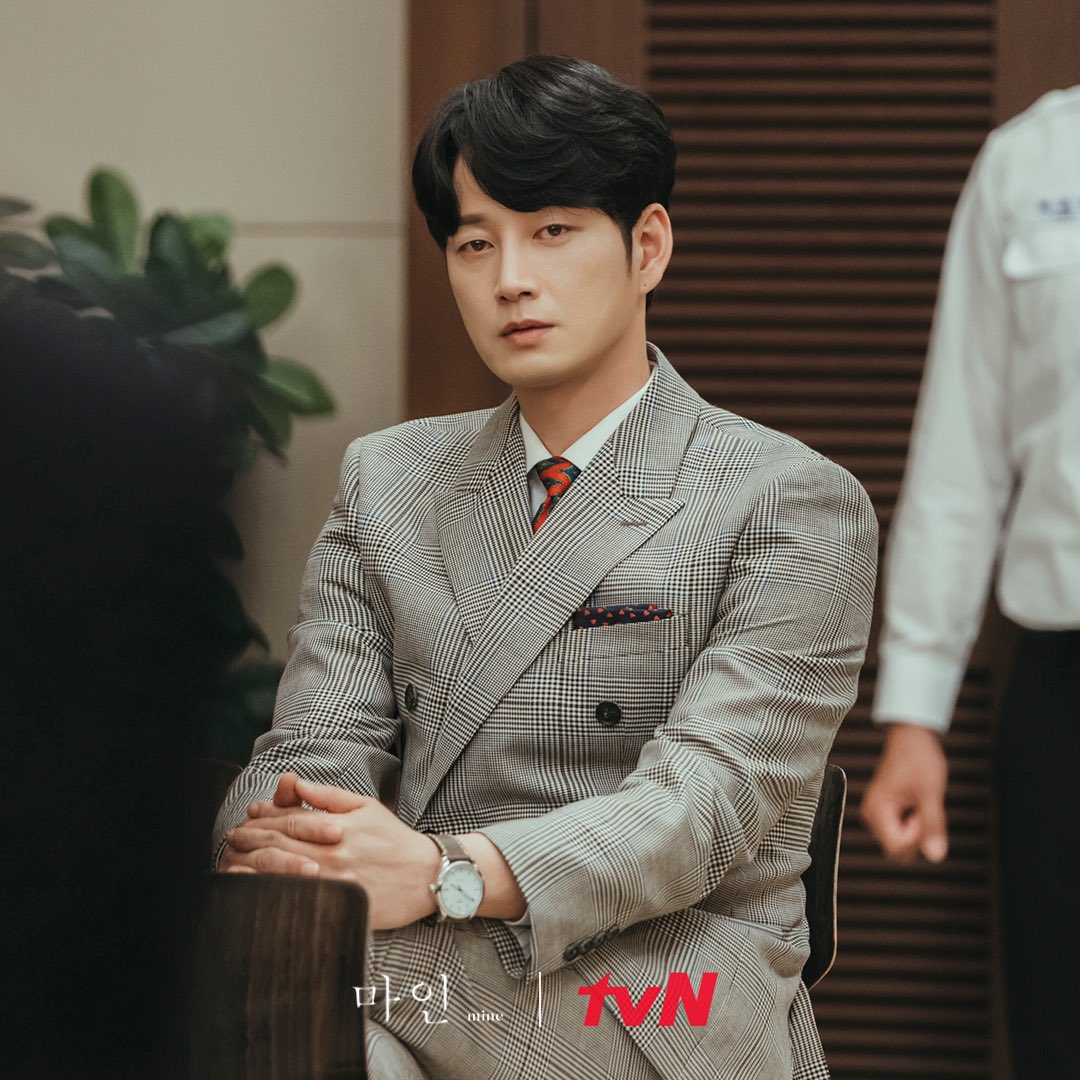 The feud between the two women boils down to who will raise Han Ha Joon (Jung Hyun Joon). Both women have shown strong affection for the child in the past, with Seo Hee Soo even stubbornly proclaiming, “I’m Ha Joon’s mother. I won’t let Ha Joon get hurt. I’m going to protect Ha Joon from that woman.”

Viewers are on the edges of their seats as they anticipate the results of the trial. Who will come out on top? Seo Hee Soo, who has the advantage of her family’s chaebol status and Jung Seo Hyun as her supporter, or Kang Ja Kyung, who is Han Ha Joon’s birth mother?