Brace yourselves—Jung Ji So and U-KISS’s Lee Jun Young’s budding romance will encounter some turbulence on the next episode of “Imitation”!

Based on the popular webtoon of the same name, “Imitation” is a KBS drama about the work and love lives of idols in the competitive entertainment industry. Jung Ji So stars as Lee Ma Ha, the hard-working center of the three-member girl group Tea Party, while Lee Jun Young stars as Kwon Ryoc, the aloof center of the A-list boy group SHAX.

On the previous episode of “Imitation,” the smitten Kwon Ryoc was adorably unable to stop thinking about Lee Ma Ha, and he eventually came up with an excuse to go visit her in person.

In newly released stills from the drama’s upcoming episode, the two lovebirds look nervous as they enjoy a furtive meeting outside. Visibly afraid of being caught, Lee Ma Ha clasps a hand over her mouth to stop herself from making any noise. Meanwhile, Kwon Ryoc affectionately holds her other hand, revealing just how close the couple has become with one another.

In the next photos, Hyun Ji (played by Lim Nayoung) and Ri Ah (played by Minseo) wear grave expressions as they catch their bandmate out on her secret date. After seeing Ma Ha suffer because of the boycott organized by SHAX’s fans, the two idols were worried about her filming a movie with Kwon Ryoc, and Ma Ha repeatedly denied that anything was going on between them.

However, when Ma Ha leaves their dorm alone at night, her fellow Tea Party members go outside to search for her and end up stumbling upon something that surprises them—raising the question of whether they spotted Kwon Ryoc together with Ma Ha. 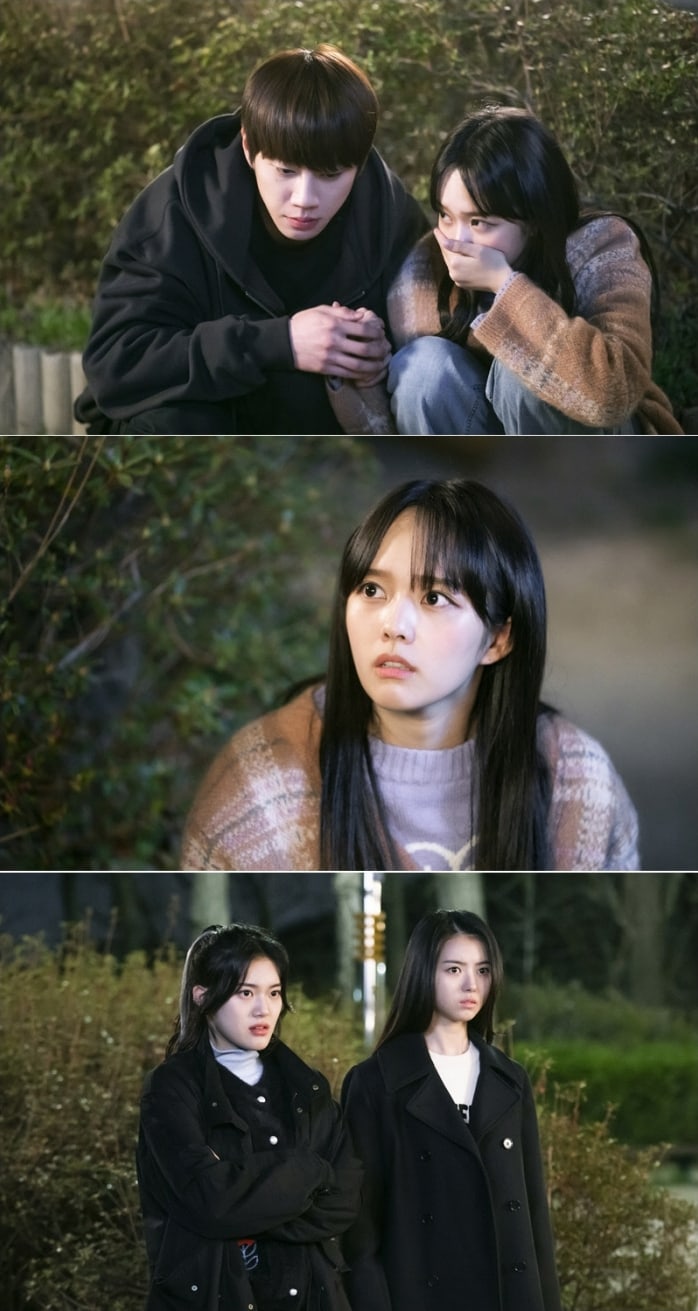 The producers of “Imitation” teased, “Due to Jung Ji So and Lee Jun Young repeatedly meeting one another, they are currently being watched closely by countless people, including their fandoms, group members, and managers. Please stay tuned until the end to find out if they will be able to let their feelings for one another grow.”