Lee Sang Woo dished on how he handles his wife Kim So Yeon’s steamy kiss scenes in “The Penthouse”!

On the June 13 episode of SBS’s new variety show “Tiki taCAR,” Lee Sang Woo made a guest appearance to chat about married life and more.

When host Kim Gura complimented Lee Sang Woo on his improved “talk show skills,” the actor responded, “I think it’s because I’m living with So Yeon now. After I got married, my conversational skills improved. Because she’s really responsive, and she expresses her feelings a lot. So I’ve learned a lot from her. I think I’ve gotten a lot better since getting married.”

As for whether he’s seen any of the terrifying expressions Kim So Yeon makes in “The Penthouse” in real life, Lee Sang Woo shared with a laugh, “I’ve seen them all.” Tak Jae Hoon asked which of those expressions was his least favorite, and Lee Sang Woo replied, “I love them all. Because I think we serve as mirrors for one another. I think we see each other’s good points and bad points, and we’re becoming better people by learning from the good in one another and avoiding the bad.” 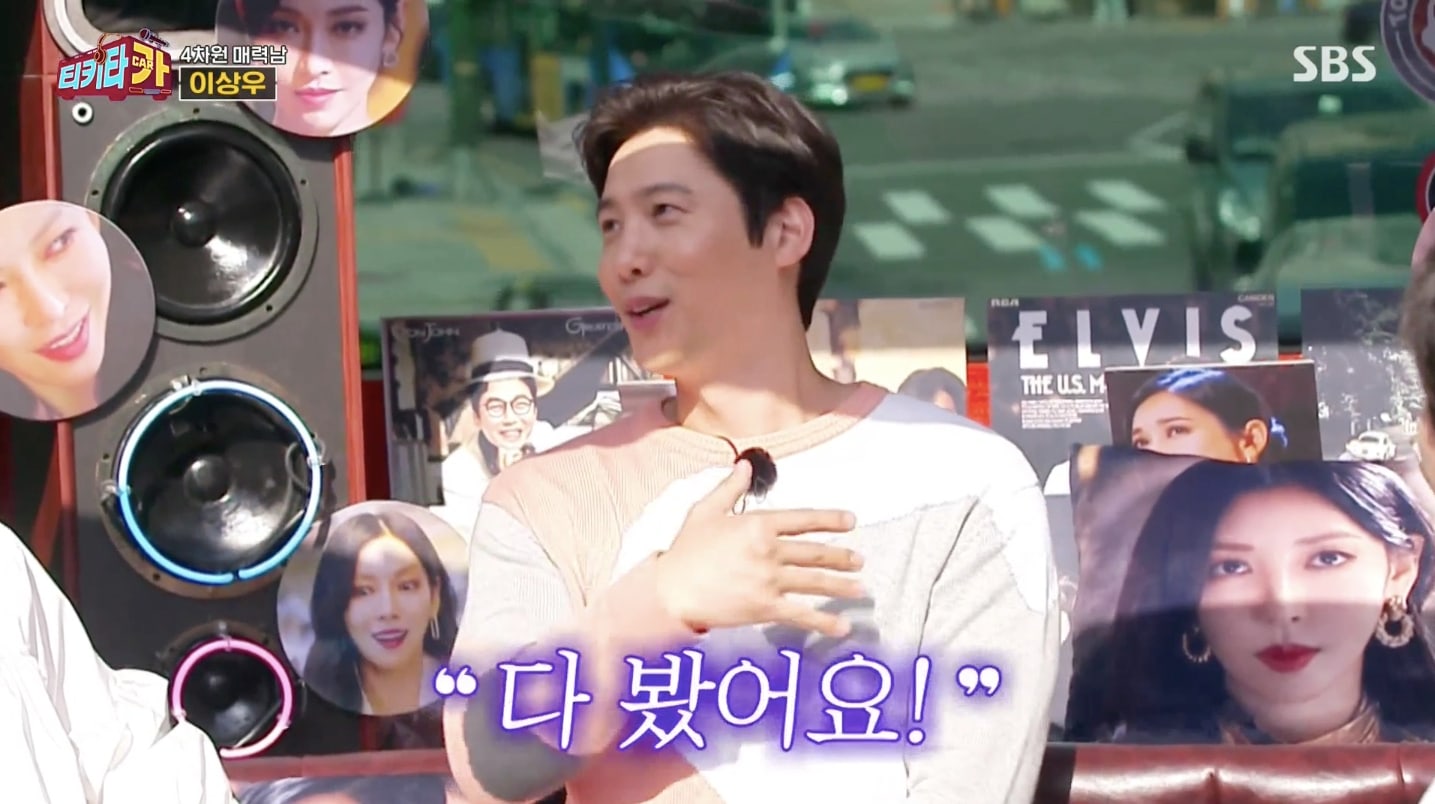 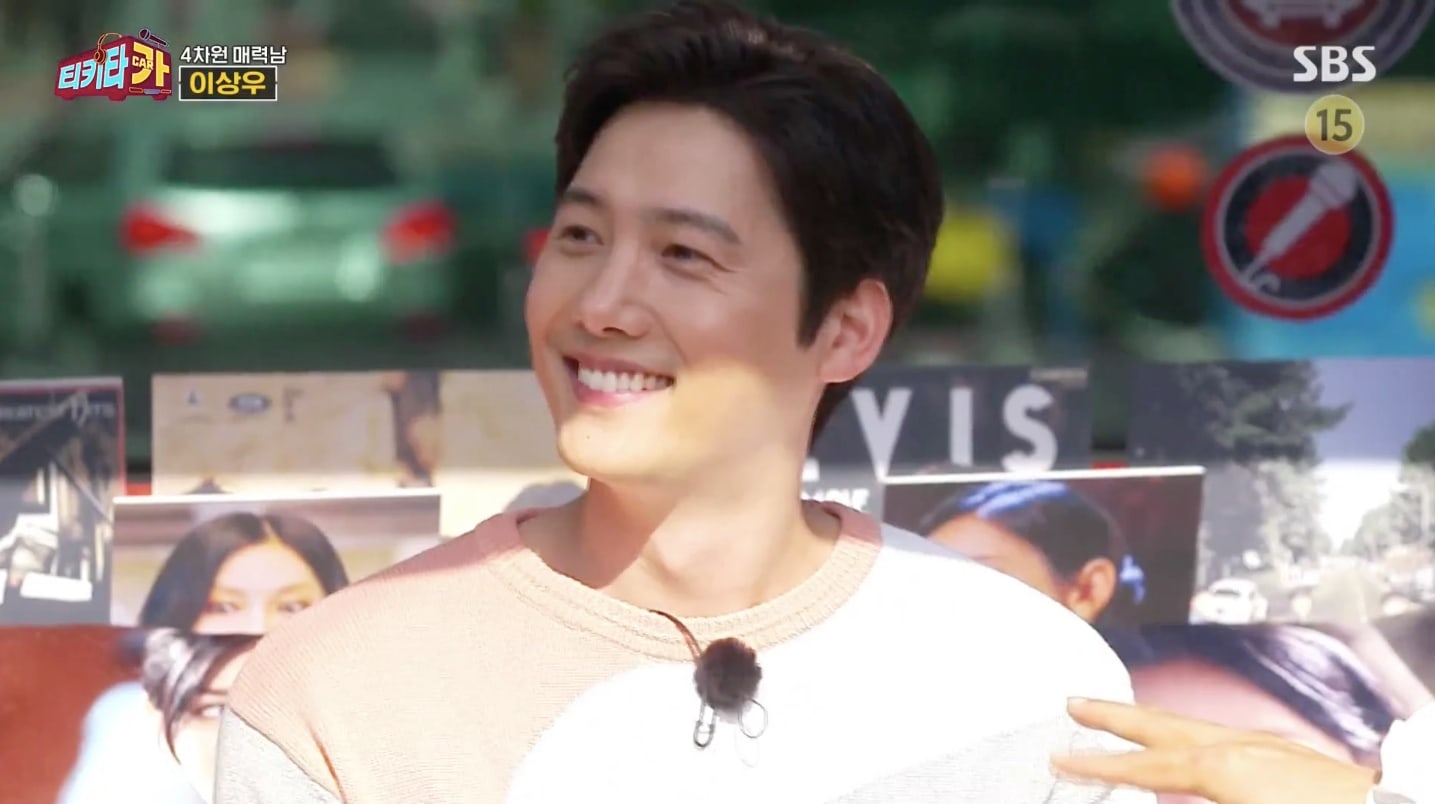 Lee Sang Woo later went on to admit that when “The Penthouse” first started airing, he would escape to their bedroom to avoid watching Kim So Yeon’s kiss scenes.

“At the beginning, I’d go into our room for a bit [during her kiss scenes],” he explained. “But now, I just turn my head [away from the screen] a little to avoid watching. So Yeon will tell me in advance, ‘Turn away for just a moment,’ while we’re watching together.”

Super Junior‘s Kyuhyun then brought up Lee Sang Woo’s cameo in “The Penthouse 2,” where he played a reporter tailing his wife’s character Cheon Seo Jin. Kim Gura amusingly pointed out that three of Kim So Yeon’s “husbands” would have been on set at once: her real husband Lee Sang Woo, as well as her two on-screen husbands Uhm Ki Joon and Yoon Jong Hoon.

“It must have been awkward during rehearsal,” said Kim Gura, and Kyuhyun remarked with a laugh, “I heard that [Kim So Yeon] acted the most awkward around Sang Woo, even though he was her real husband.”

To prove his point, the show aired a behind-the-scenes clip from the filming of “The Penthouse 2” where Lee Sang Woo arrived on set for his cameo. Kim So Yeon, who had been in the midst of rehearsing a scene with Yoon Jong Hoon, introduced her husband to everyone. She then stood nervously next to her co-stars and laughed, “Wow, this is awkward,” leading her two on-screen husbands to exclaim, “You shouldn’t keep standing over here, you should go over there! Go!” 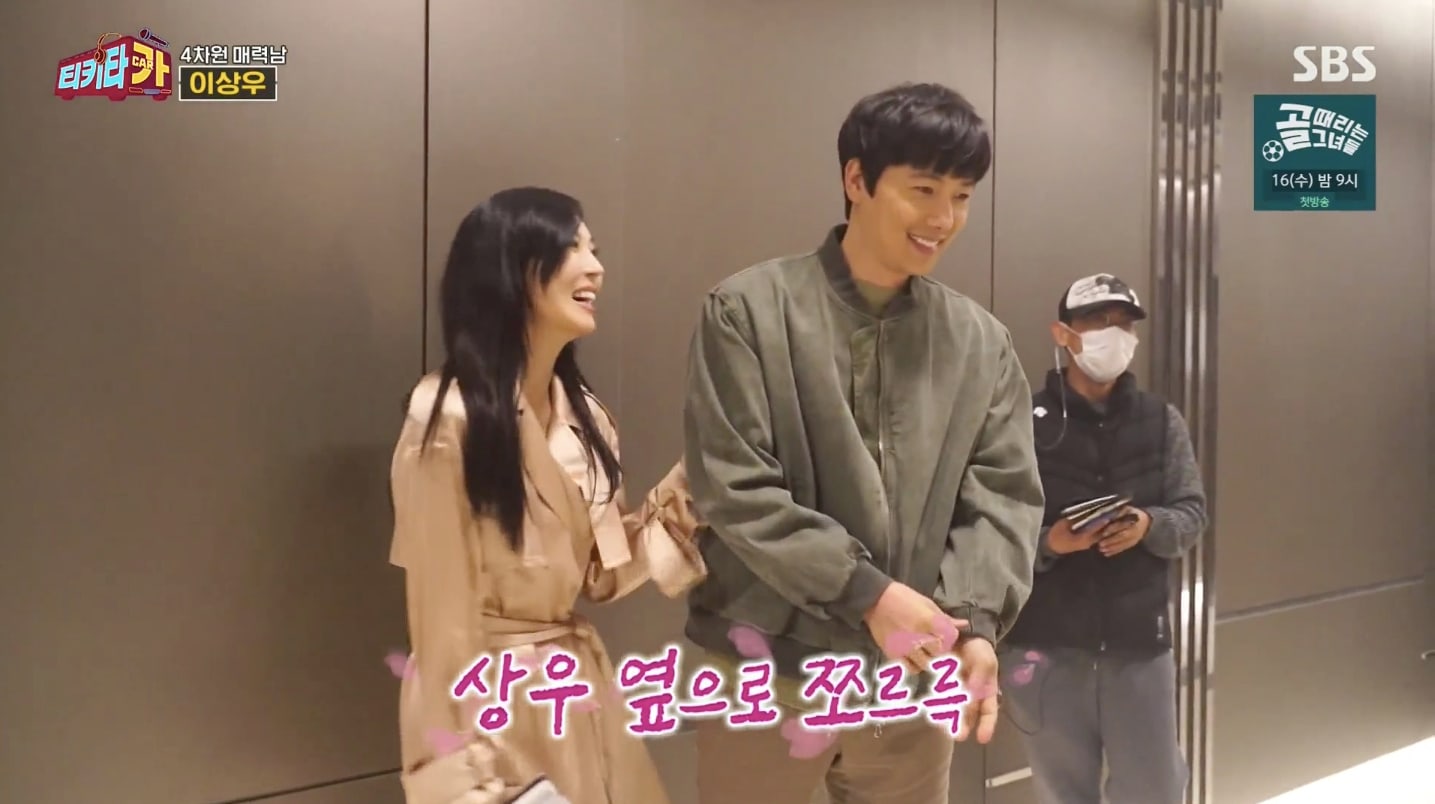 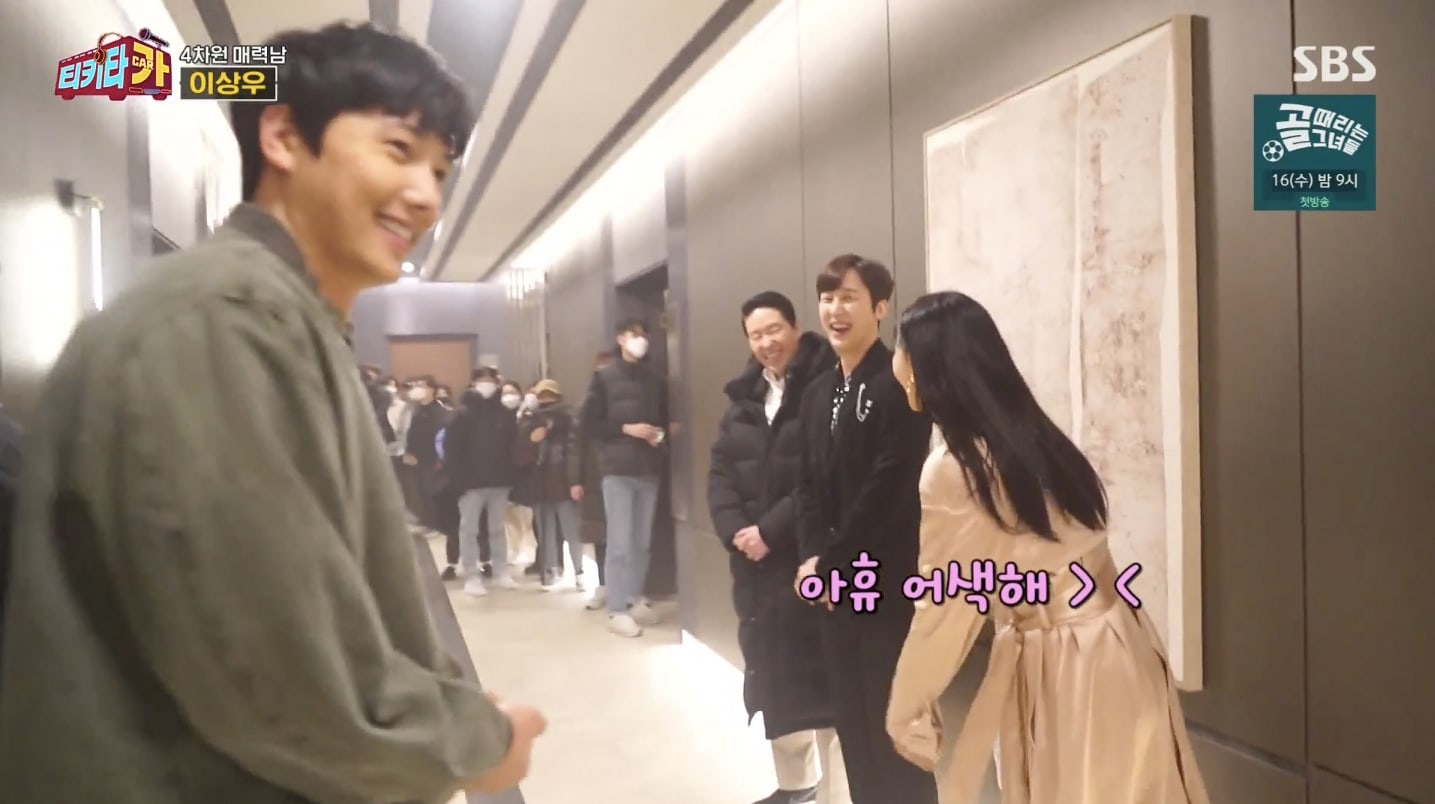 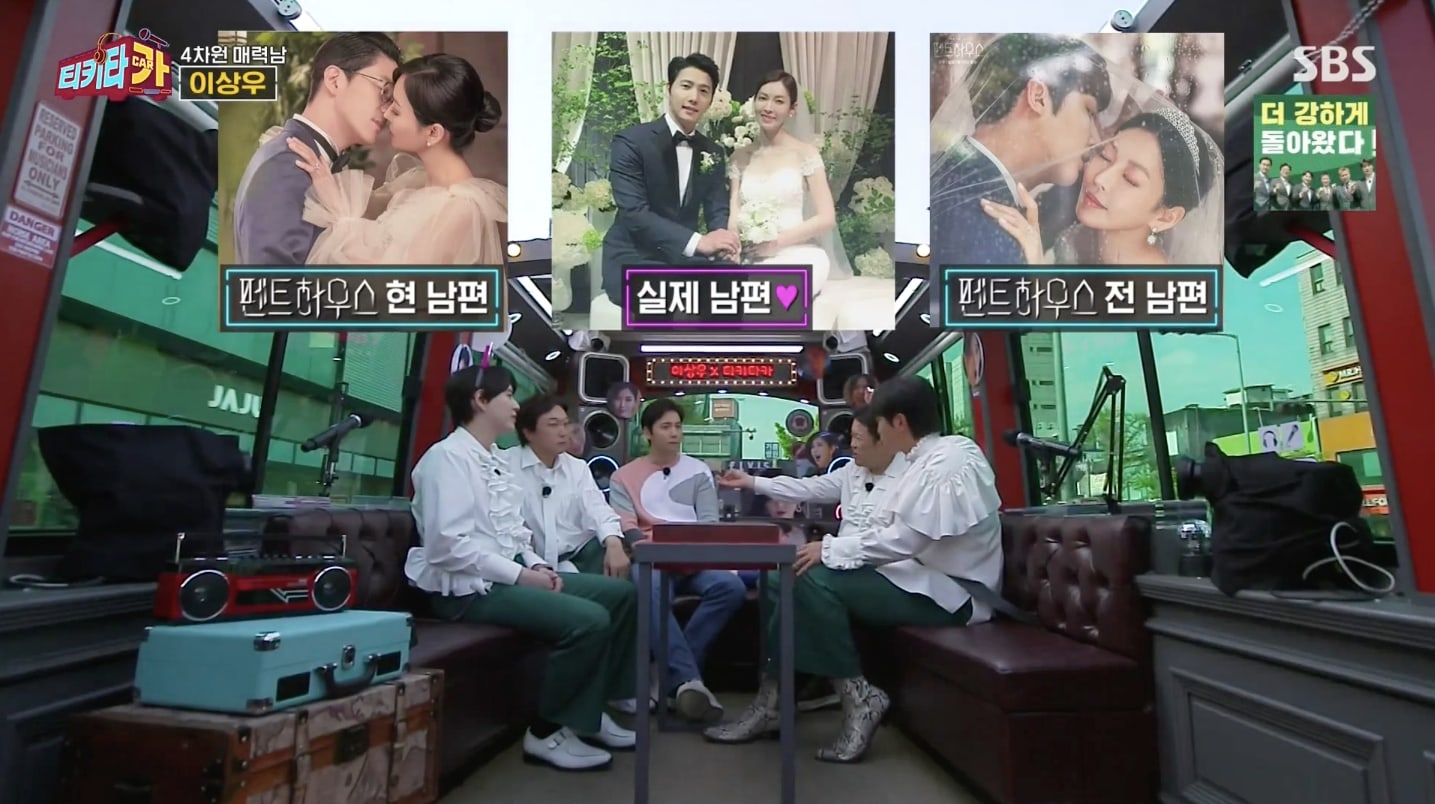 Lee Sang Woo explained, “When you’re a regular on a series, you end up getting to know the cast and crew on set, but I didn’t know [the cast and crew of ‘The Penthouse’] at all.” Kim Gura responded, “So it was just natural awkwardness, not anything to do with them being your wife’s [on-screen] husbands or things like that,” and Lee Sang Woo agreed, “That’s right.”

Check out the clip of Lee Sang Woo meeting Kim So Yeon’s “other husbands” on the set of “The Penthouse 2” below! (Lee Sang Woo first arrives at 5:29 in the video.)

…and watch Kim So Yeon in “The Penthouse 3” here!