A unique blend of mystery thriller, romance, and comedy, KBS 2TV’s weekend drama “Revolutionary Sisters” tells the story of an entire family becoming murder suspects after the family’s mother is killed in the midst of her divorce proceedings.

“Revolutionary Sisters” has been the most-watched program to air on any channel on Saturday. The latest episode that aired on June 13 scored average nationwide ratings of 28.4 percent and 31.5 percent for its two parts.

The “Kwang” sisters Lee Kwang Nam (Hong Eun Hee), Lee Kwang Shik (Jeon Hye Bin), and Lee Kwang Tae (Go Won Hee) have been facing trouble after trouble, drawing the sympathy and interest of viewers. Read on for hints on the turning points await each sister in the upcoming episodes!

On the day before her wedding with Hwang Chun Gil (Seo Do Jin), Lee Kwang Nam realized that her fiancé was a con-man but was unable to bring the wedding to a halt. In the end, she was taken away by the police at her wedding venue. Feeling embarrassed about herself and not wanting to hear the complaints of her family, she took seven bottles of soju up a mountain path and got alcohol poisoning. Thankfully, she was discovered just in time and was saved. With the help of Bae Byun Ho (Choi Dae Chul), Lee Kwang Nam was cleared of her charges, but she teared up to hear Bae Byun Ho say he would no longer speak to her. Lee Kwang Nam decided to work at her aunt Oh Bong Ja’s (Lee Bo Hee‘s) fish store, and despite the concerns of her family, she adjusted well to her new job. It remains to be seen if Lee Kwang Nam, who is struggling hard to start a new life from the bottom, will be met with a new turning point. 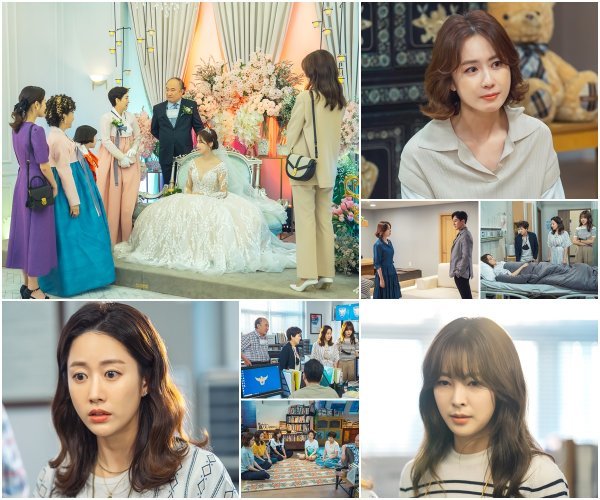 Lee Kwang Shik was shocked to find out that her boyfriend Han Ye Seul’s (Kim Kyung Nam‘s) father was Han Dol Se (Lee Byung Joon). Her aunt Oh Bong Ja had loved Han Dol Se for 35 years and was finally getting ready to marry him. Oh Bong Ja had even introduced Han Dol Se to Lee Kwang Shik as her new uncle, but it turned out that Han Dol Se was Han Ye Seul’s father. To add to that, Han Ye Seul expressed his hostility towards Oh Bong Ja, saying, “I can’t forgive the woman who made my mom miserable. I’m going to personally ask her why she did such things to destroy a household.” Lee Kwang Shik tried to persuade him to acknowledge them as a couple, but he replied, “The moment I acknowledge them, I’m contradicting my mom. That woman destroyed a family!” Lee Kwang Shik is left with the difficult decision of choosing between her aunt who is trying to find happiness and her boyfriend Han Ye Seul.

After agonizing greatly about Heo Gi Jin’s (Seol Jung Hwan‘s) marriage announcement, Lee Kwang Tae called Heo Gi Jin out while drunk. Completely inebriated, she asked Heo Gi Jin to wait five years until she can provide for both of them. But she soon changed her mind and said, “Five years is too long, isn’t it? You’d starve to death waiting that long.” After telling him to forget about her and live a good life, she pat Heo Gi Jin’s cheeks and yelled, “Delete today!” Heo Gi Jin looked back at Lee Kwang Tae with a deep gaze after hearing her confession, making viewers wonder if he will decide to live with Lee Kwang Tae or if Lee Kwang Tae will really let Heo Gi Jin go.

The producers of the drama shared, “In episodes 27 and 28, the Kwang sisters will take unexpected steps as they face new troubles. Please look forward to today’s (June 19’s) episode where Kwang Nam, Kwang Shik, and Kwang Tae’s breakthrough will continue.”

“Revolutionary Sisters” airs every Saturday and Sunday at 7:55 p.m. KST.