First Impressions: “The Devil Judge” Is A Hard-Hitting Spectacle Of Hope And Fury

Ji Sung is back, and promises to shake things up as the titular devil judge of tvN’s newest Saturday-Sunday drama from the brilliant writer of “Ms. Hammurabi.” The teasers for “The Devil Judge” promised pageantry, warring philosophies, and Ji Sung having chemistry with everyone (how does he manage to have sparks with Kim Jae Kyung, Jinyoung, and Kim Min Jung?). And the drama definitely delivers!

Here’s what we loved about the first couple episodes!

The show’s built a universe that’s a contained depiction of modern society, from the media controlled by wealthy corporate players, to the Ministry of Justice being little more than a puppet show put on for the public by incarcerating low-level criminals, plus the difficulty of proving the detrimental medical effects of megacorp pollution. These plotlines require heavy lifting on part of the actors, and the veterans here carry the show just as hard as our main quartet.

The President, Heo Joong Se (Baek Hyun Jin), approves the idea of a televised courtroom with the consent of Cha Kyung Hee (Jang Young Nam), the Minister of Justice. Park Du Man (Lee Seo Hwan), CEO of Saram Media Group owns the channel that airs the trial and stands to profit if it proves a hit, while lecherous Seo Jung Hak (Jung In Kyum) runs the Social Responsibility Foundation (a catch-all substitute for NGOs and the UN) and seems to hoard much of its donations to build himself expensive sarcophagi-stuffed meditation rooms.

These people (and several other CEOs) form the wealthy elite that run the country from behind the scenes and essentially own it in all but name. From the sly way they eye Kang Yo Han (Ji Sung) and Jung Sun Ah (Kim Min Jung), it’s clear that they don’t consider them to be a part of their exclusive club, but as lackeys to shape laws and public opinion the way these people wish. But all that is about to change. Because Yo Han’s been watching them as they scheme, weasel their way out of trouble, and cut down any one who opposes them, and he’s about to make them all pay.

The initial teasers teased a set-up akin to tvN’s brilliant adaptation of “Liar Game” but “The Devil Judge” has a slightly different take. Both shows use television as their medium, but “Liar Game” used its reality show to highlight human self-interest and greed, while the live courtroom in “The Devil Judge” sells the illusion of justice to people. The idea seems to be Yo Han’s brainchild. There’s a sense that he’s waited a really long time for this and that the game he’s playing has just begun.

The devil’s in the details with the show. The judges’ robes mimic the extravagance of clergy robes, directly drawing parallels between judges and the idea of playing God, which Kang Yo Han runs with here. There’s a brilliance to how he manufactures a story during the trial. There’s the blustering defendant, the passionate prosecutor who seems like he’s going to lose, the sleazy defense counsel blatantly using every trick in the book to worm his client out of the charges, the recanting witness plagued by guilt and conscience, and that moment when it seems that justice will not happen, but Yo Han gives an impassioned delivery of the defendant’s sentence. It reads like a story, with highs and lows. It’s too perfect, and fellow judge Kim Ga On (Jinyoung) sees it.

Because this isn’t about giving people real choice – it’s about manipulating them into seeing what Yo Han already knows. It’s a twisted process to achieve a just result.

But there’s more to it than just that. Through the first trial, Yo Han not only took down a powerful CEO and earned the people’s faith, but he also earned power. Not the kind of power he already had, the kind that comes with strings, but the kind that acts as a shield because the entire nation is on his side now. The wealthy elite who saw him as a tool, like Cha Kyung Hee, make the nasty discovery that he’s suddenly on the same level as them. Untouchable.

And the thing with people who are untouchable is that only they can bring each other down. But Yo Han always knew that. 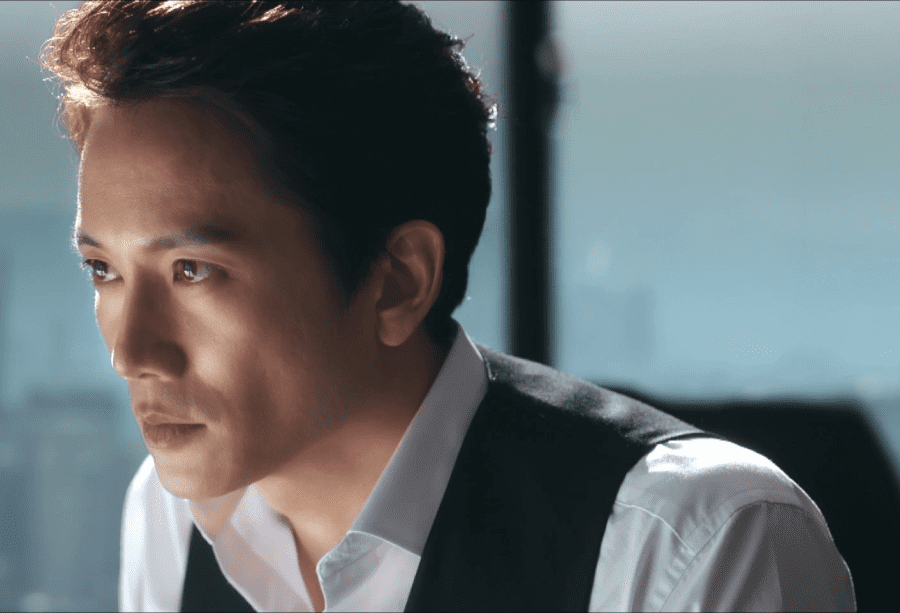 Ji Sung’s role here seems similar to Shin Ha Kyun‘s incredible turn in “Beyond Evil,” which is exciting because Ji Sung hasn’t flexed his antihero acting muscles since 2015 when he played the indelible Shin Se Gi in “Kill Me Heal Me.” But unlike Se Gi’s manic madness, Kang Yo Han is all restraint, all pointed glances, and soft-spoken barbs. There’s a solid wall between him and the rest of the world, yet there’s something in his mannerisms – in the detached but amused way he surveys those around him – that hints at a wildness. Jung Sun Ah remarks that she isn’t sure if Yo Han is tame, and that might be the closest word for what we currently see. He’s a man who makes his own law in a world where the law means nothing. And oh boy is he delicious. Oh Jin Joo (Kim Jae Kyung) looks beyond delighted when waltzing with him, and who can blame her!

It is worth noting though that Yo Han operates under an extreme version of Hammurabi’s Code (the codex from which the infamous “eye for an eye” originated). He seems more of a “two eyes for an eye” kind of person. His conversation with Ga On at their awkward post-trial dinner highlights that much. Ga On goes too far in making a couple digs about the profession of Yo Han’s father and just how that would have impacted his parenting. Yo Han patiently takes it for a few minutes, and retaliates even harder in one sentence by bringing up the suicide of Ga On’s parents, wiping Ga On out. Yo Han’s revenge upon his classmates proves the same. He may seem calm and collected, but he’s just planning revenge.

But for all Ga On’s suspicion, we haven’t actually seen Yo Han do anything terrible. He’s a born manipulator but we haven’t seen anything so evil that justifies Ga On’s antagonism. Yo Han’s methods are without a doubt illegal, but they’re only necessary because the system is broken.

But that reality (and philosophy) doesn’t sit well with Ga On, the optimistic foil, to Yo Han’s brooding antihero.

4. Jinyoung as the unwavering optimist

Ga On is, in essence, the uncorrupted lens through which we see the show. “The Devil Judge” thankfully doesn’t linger too long on his background and what happened to his parents, but it appears this will be relevant later on. Yo Han continuously murmurs that Ga On looks just like “him,” while flashing back to a burning church and a man that looks like Ga On silhouetted against the flames.

Min Jung Ho (the brilliant Ahn Nae Sang), Ga On’s professor and mentor, speaks of Ga On’s troubled past. Perhaps for all his optimism and staunch faith in due process, Ga On isn’t as innocent as he appears. What’s certain is that the man shows an incredible disregard for his own safety. There’s a school bus veering toward a little girl? Ga On’s to the rescue. Yellow Corvette attempting to kill people? Ga On’s on the way. Exploding painting? Ga On’s here to physically be a shield. Ga On, please be safe.

His best friend and apparent romantic interest Yoon Soo Hyun (Park Gyu Young) is just as casual about her safety. A no-holds-barred cop who, despite her profession, still seems to hold onto an innocent faith in the world and in justice the way Ga On has, Soo Hyun would clearly do anything for him and vice versa. Their relationship is refreshing among the vast catalogue of drama romances – best friends who trust and rely on each other while clearly having feelings for each other, but those feelings don’t interfere with their friendship. But their relationship isn’t the heart of the show.

5. The warring philosophies at the heart of the show 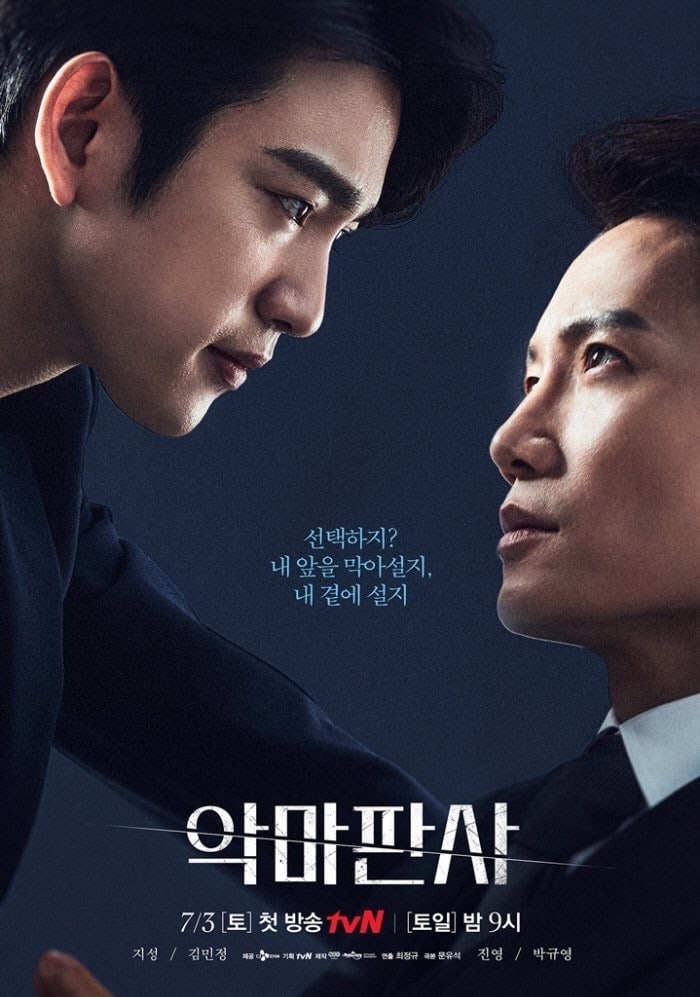 What does it mean to defeat evil with evil? To Ga On, this is arrogance and madness. To Yo Han, this is reality. Ga On’s philosophy is unyielding: justice should always be pure and never underhand, or else it is little more than lawlessness. Yo Han sees this as naïve, and given what he’s up against, it’s hard not to agree. As he explains to an aghast Ga On, a trial is a game where the wealthy always have the upper hand. What Yo Han does is to even the score. Those who get hurt are the ones that deserve it, so what’s the problem? Ga On and Soo Hyun’s answer makes no sense. They argue it’s just wrong anyway because no one should be above the law, but they fail to recognize that it is unrealistic. If the preview is any indication though, those rosy ideals are about to start shattering.

Clocking in at three hours a week, “The Devil Judge” packs quite a punch. There’s so much to cover! We’ve only seen Jung Sun Ah in the periphery thus far, but she seems formidable in the extreme. Sweet, sly, incredibly-dressed, and hiding much more than she shows, this is no mere secretary. She seems quite disgusted by Chairman Seo, and quite taken with Yo Han. There is so much chemistry just oozing between them during that dance at the Social Responsibility Foundation’s fundraiser!

Then again, there’s just as much chemistry between Ga On and Yo Han! Our devil judge also appears to be searching for someone, given his nighttime wandering of homeless encampments where he peers at faces and checks their watches. Just who is he searching for? What is his grand plan? And why would a man so careful purposefully let his mask slip in front of Ga On? Looks like there’s a new reason to look forward to the weekend!

Currently Watching: “The Devil Judge,” “Monthly Magazine Home,” “Undercover,” “You are My Spring,”
Looking Forward to: “The Veil”