The weekend has never been more exciting with Ji Sung and “The Devil Judge.” We’ve fire, blood, and betrayal as lines are drawn, allies are found, and new enemies are unveiled. Ga On (Jinyoung) takes a backseat as a judge but takes a step forward in his investigation of Yo Han (Ji Sung) as he attempts to discern the man behind the mask. But is Ga On ready for what he’ll find when the mask comes off?

Here are a few jaw-dropping moments from this week’s episodes!

The world of the elite can be horribly sexist, and Sun Ah is intimately familiar of just how poorly women are treated. Cha Kyung Hee (Jang Young Nam), the only female in the group who’s powerful in her own right (as opposed to someone’s wife) is openly mocked by the others. They gloat that her son turned out the way he did because she was too “aggressive” aka too much of a confident, powerful woman (even if evil). Thus, Sun Ah chooses to hide behind a secretary’s facade, uses a corrupt weak-willed man as a puppet CEO, and laughs as everyone eats it up. The details in this show are fascinating because Chairman Seo (Jung In Gyeom) has appeared frail from the start, and we find that it’s because she literally starves him when he sexually harasses someone.

Like Yo Han, Sun Ah is all about hard justice. President Heo Joong Se (Baek Hyun Jin) learns that the hard way when he stands in the way of the Social Responsibility Foundation’s Dream Home project. Little more than a thinly veiled attempt to shunt the homeless, sick, and poor out of Seoul, the project appears to be Sun Ah’s brainchild, and something she’s very determined to have succeed if she’s willing to plant a bomb in Yo Han’s office for it. Heo Joong Se’s protestations are easily silenced when she offers him 20 percent of the profits, and the scene where she steps all over his face while he unwittingly considers it a massage is a powerful glimpse of just who this woman is, and how far she’ll go for what she wants.

It’s interesting given that Sun Ah mentions that she grew up poor and took all sorts of jobs to support herself. Why would someone intimately familiar with poverty seek to make money exploiting the poor? And yet, the Foundation commands healthy respect in the public’s eyes, on pair with Yo Han’s live trial. So perhaps not everything Sun Ah does is evil. Or perhaps she’s just very, very good at hiding it. Yo Han has a formidable enemy in her, and the worst part is that he doesn’t know it yet. 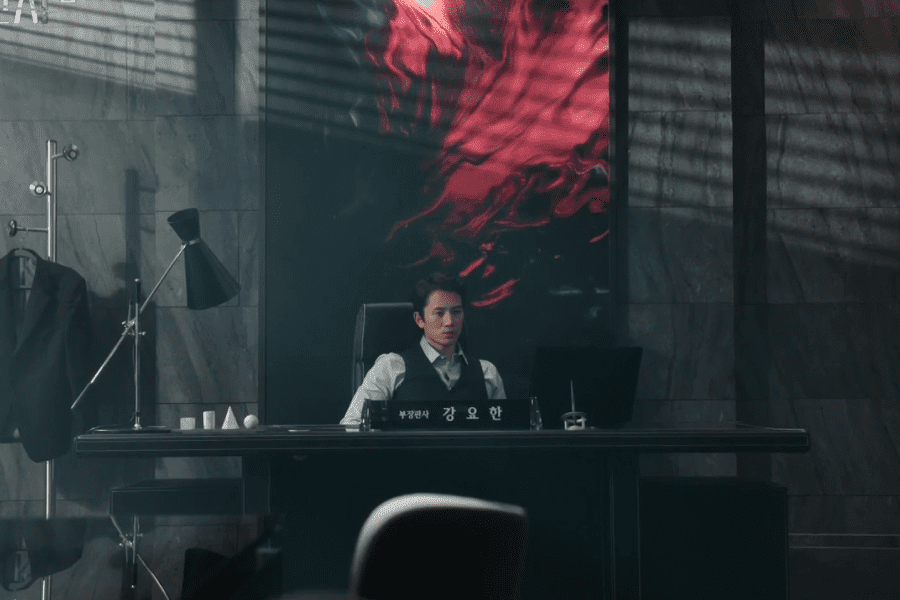 Watching Young Min’s (Moon Dong Hyuk) parents scurry around using every underhand trick to let him off scot-free was nauseating. But as always, Yo Han is prepared.

Cha Kyung Hee forces the victims to sign releases? Yo Han opens the door to so many victims that Kyung Hee can’t possibly threaten them all. He lays these abuses of power bare to the public and asks them to make their judgement. Ga On is horrified at apparent anarchy Yo Han is perpetrating but fails to recognize that this is what democracy is: majority rule. Ga On’s belief in justice as something pure and untouchable, altogether separate from human foibles, is deluded.

Yo Han’s justice fits punishment to the crime. We see Young Min attempting to mow down homeless people, beating up waitresses, and making diabetics eat sugar just because he can. He’s consistently demonstrated that he thinks he has the right to hurt people because of his wealth and status. Thus, public humiliation, making the mother who unleashed him on the world and covered up his crimes sign his order for flagellation, is the perfect punishment.

It is important to note that the show isn’t condoning such punishment in general, and takes pains to show how repulsive it is in action. Yet, it’s hard to argue that this isn’t just, given everything Young Min has done. Flagellation won’t compensate the victims; the restaurant owners that filed the initial complaints are still losing their business. But it feels good, feels just, and, most importantly, gives people hope. But is that enough for Ga On?

3. Yo Han and Ga On’s relationship

Ga On’s convalescence in Yo Han’s home helps both of them. Yo Han gets to keep Ga On safe while he recovers as Kyung Hee goes on the warpath threatening all who dare go near her son. For his part, Ga On turns into a heroine in a Gothic romance, as he wanders Yo Han’s mysterious home and familiarizes himself with its strange people in an effort to figure the enigmatic man out. It’s a wary dance between them, but it also feels like they’re playing house.

Ji Sung in half-open bathrobes is a mood

There’s an intense emotional connection between the two that’s extremely apparent and verges on the romantic. Yo Han for his part, seems drawn to Ga On and fiercely protective of him. Those scenes where he sat on the bed in a bathrobe with wet hair and tended to Ga On’s wounds felt intensely personal, as did the way he kept seeking out Ga On after a long day.

Even that scene where Ga On changed into a tux was emotionally charged, especially the way Yo Han couldn’t stop looking at him. The aftermath where Ga On emerged from the dressing room all dressed up, felt like the female character in a romance coming out in a fancy dress and the male lead’s jaw dropping. And Yo Han’s jaw definitely did drop.

Ga On for his part isn’t so much drawn as he is suspicious about everything. Just what happened in the fire 10 years ago? Why do Yo Han’s housekeeper and niece hate him so much? How is it that the cop who closed the case retired soon after, with enough severance pay to open a restaurant and live comfortably? And just why did Yo Han cancel his brother’s donation to the Foundation? It all seems to point to Yo Han engineering his brother’s death, and Ga On’s ill-fated experience at the Foundation’s fundraiser only worsens those suspicions

4. The man behind the mask 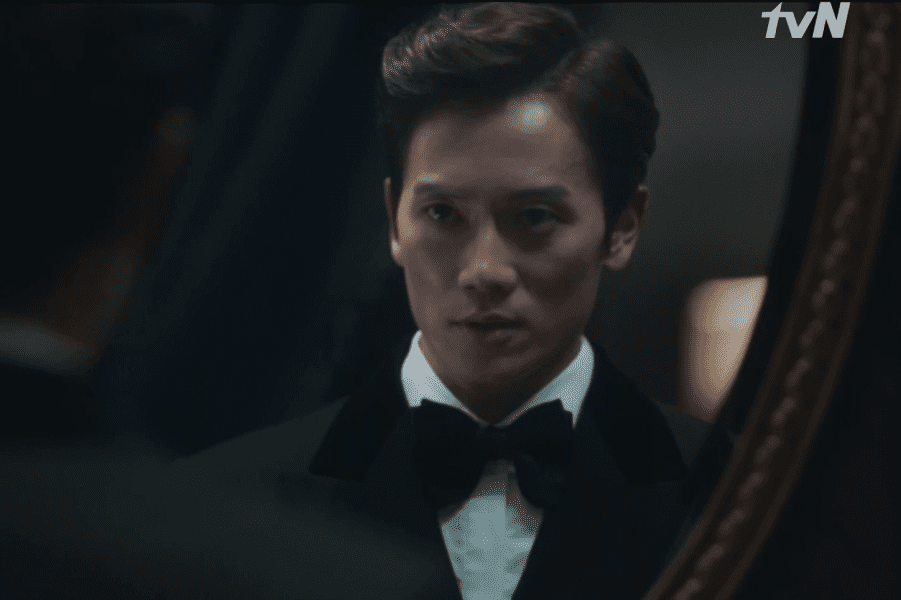 At long last, Ga On thinks he’s glimpsed the man behind the mask. The Yo Han at that Foundation dinner is a cunning, sleazy political player, embroiled in the worst corruption imaginable. It’s all Ga On can do to keep his food down as he meets the people who run the country and discover just how repulsive they are.

But for all Ga On’s antagonism of Yo Han, he fiercely jumps to his rescue when the elites at the dinner table attempt to corner him. Yo Han knows this game and its players well enough to fear that Ga On will get hurt, and drags him away from the table in a show of domination. But Ga On takes this as further proof of Yo Han’s corruption. This belief is so entrenched that Sun Ah has no trouble twisting Ga On around her little finger, leading him on a wild goose chase to find further proof of Yo Han’s “crimes.”

This is an excellent example of confirmation bias. Ga On’s been so certain that Yo Han is evil that he’s only every considered that possibility. Punishing Joo Il Do (Jung Jae Sung) and Lee Young Min? That’s just because Yo Han wants to boost his popularity so he can run for President. Ga On never stops to consider why Yo Han chased after Young Min’s yellow corvette and smashed it up. What did he gain by doing that? It wasn’t on TV and the public never ends up hearing about it.

Ga On’s tunnel vision is frustrating, but interestingly enough, his reaction to seeing Yo Han’s supposed true face was disappointment. It’s like he wanted to be wrong and wasn’t. It’s a good thing then that Ga On finds out that he doesn’t have everything right.

5. The truth behind the fire 10 years ago

Incredible. Ji Sung deserves an award for this scene alone.

This was a harrowing scene, beautifully-shot and acted, and couldn’t have been placed at a better point in the story. At last, we learn Yo Han’s motivations and, as expected, they make perfect sense. The outcast of the family, Yo Han clearly adored his older brother, Kang Isaac (also played by Jinyoung), secretly coming along to support him on a day that was important to him. It’s all the more horrifying when he’s a firsthand witness to the day’s destruction: to the wealthy elite his brother trusted trampling all over his family in their frantic desperation to save their own skins.

He registers every one of them while he desperately tries to get through the narrow church door. He etches their faces into his memory when he emerges from the ash carrying his niece, seeing them all safe and well, while his brother and sister-in-law perished. There’s the firefighter who knew Yo Han was alive but left him in the rubble so he could steal Isaac’s watch. Yo Han didn’t have to lift a finger; the man fell all by himself, calling an ambulance was pointless. As for the Minister of Justice who left a child trapped between pews, Yo Han destroyed her child and her reputation. For every single person who saw Isaac searching for his daughter, Elijah, but refused to help despite behind right beside her – Yo Han swore to make them all pay.

And Yo Han isn’t after revenge for just himself. He gives Kyung Hee a choice if she wants to save Young Min, if she reveals the miscarriage of justice she perpetrated that resulted in the suicide of K’s (Lee Ki Taek) father. He identifies strongly with the idea of vigilante justice because he’s a victim and knows how impossible it is to make the elite pay.

The truth is enough to leave Ga On speechless, especially when Yo Han bares his wounds (quite literally). But is it enough? We still don’t know how the fire started, and Yo Han’s comments that people sure love a good story leaves open the possibility that there’s more he’s not telling us.

The preview shows Yo Han offering Ga On the choice between standing at his side or in his way. Here’s hoping Ga On takes the former, because Sun Ah’s on the move, and Yo Han’s going to need all the help he can get. Plus, who can resist more of this?

Check out the drama:

Currently Watching: “The Devil Judge,” “Monthly Magazine Home,” “Undercover,” “You are My Spring”
Looking Forward to: “The Veil”