On June 24, Japan’s largest music statistics site Oricon shared its chart for the week of June 28.

BTS’s new Japanese greatest hits album “BTS, THE BEST” has taken the No. 1 spot with 794,345 points. The group also topped the weekly combined album chart and weekly digital album chart with this album. In particular, “BTS, THE BEST” sold 782,369 copies in the first week of its release, breaking their personal first week sales record achieved by their Japanese album “MAP OF THE SOUL : 7 ∼THE JOURNEY” with 564,000 copies sold (on July 27, 2020). In addition, BTS’s “Butter” remained at the top of the weekly streaming chart for the fifth consecutive week.

SEVENTEEN’s “Your Choice,” which sold 1.14 million copies in just four days after its release, has grabbed the No. 2 spot on Oricon’s weekly album chart with 146,062 points. They also placed second on the weekly combined album chart and third on the weekly digital album chart. The title track “Ready to Love” achieved high rankings on domestic music charts including Genie, Melon, and Bugs, while in Japan, the song soared to the top of Line Music and AWA. SEVENTEEN also hit No. 1 on iTunes Top Songs charts in at least 22 countries as well as iTunes Top Albums charts in at least 18 countries. 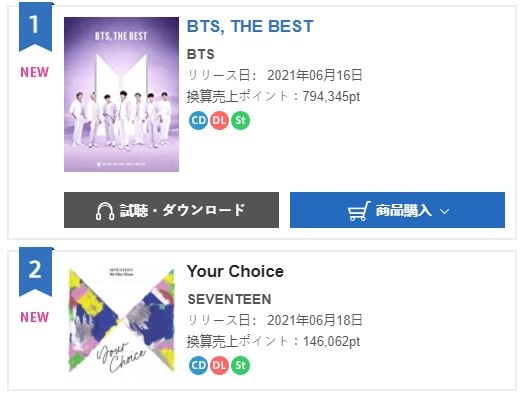 TWICE
EXO
BTS
SEVENTEEN
How does this article make you feel?