The cast of tvN’s “Doom at Your Service” picked their favorite scenes from the drama!

Below are the actors’ favorite moments from “Doom at Your Service”!

Park Bo Young picked the ending of episode 5 in which Tak Dong Kyung comforted Myul Mang while he was watching people carrying a box used for traditional Korean weddings with gifts from the bridegroom to the bride. Seeing Myul Mang upset about the disappearing tradition, Tak Dong Kyung compared his existence to a supernova, which shines the brightest the moment it disappears and becomes energy for the new stars being born. Park Bo Young shared, “It’s the point where Dong Kyung begins to understand and feel sympathy for Myul Mang, and I wanted to pick it as the best scene because the way she comforts Myul Mang feels warm. In the scene, Myul Mang also explains the work he does, saying, ‘The things that disappear are mostly beautiful,’ and I thought it was a scene through which you could understand Myul Mang’s mission while simultaneously seeing his humane side.” 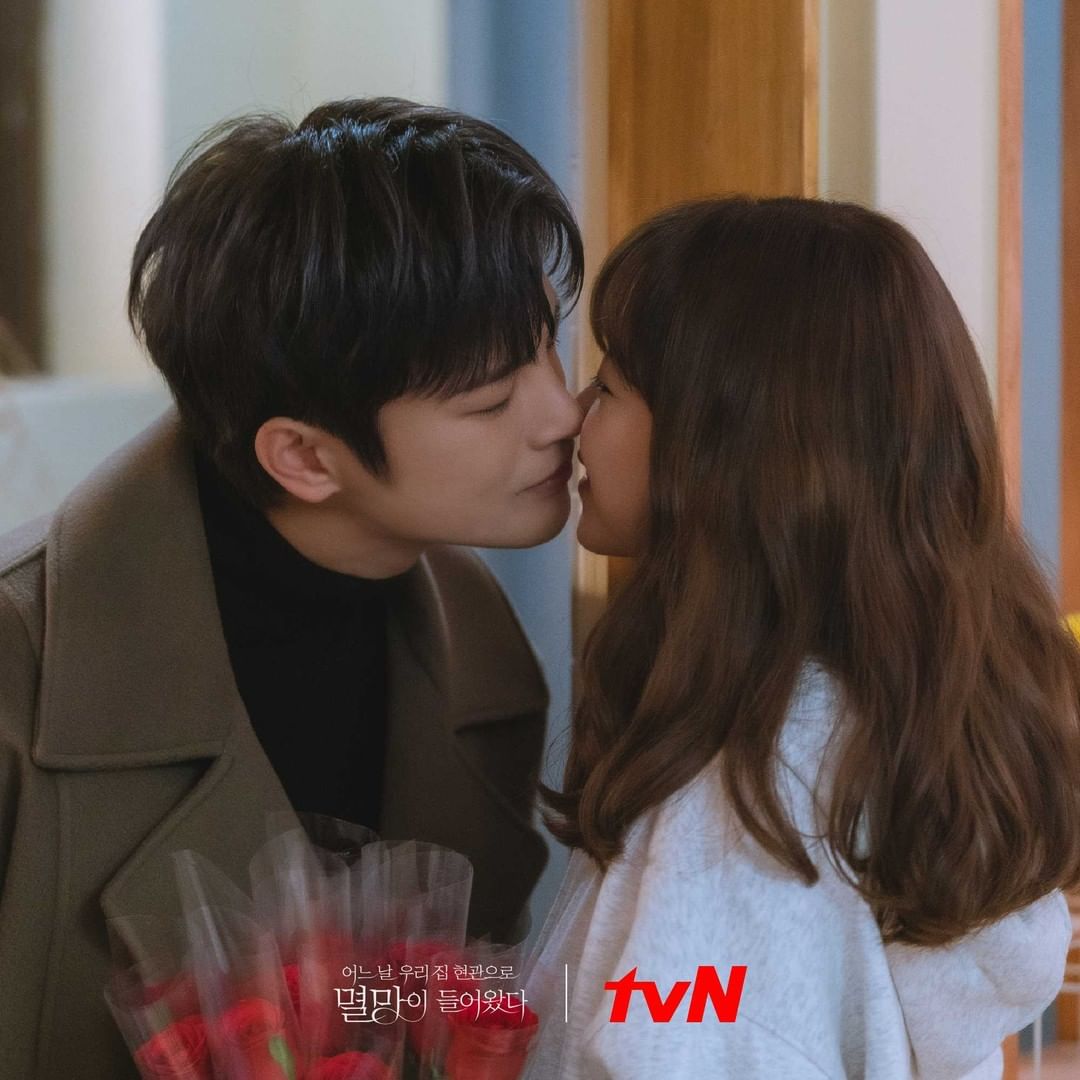 Seo In Guk picked as his favorite scene the part where Myul Mang held onto Tak Dong Kyung’s hand while running through the rain and comforting her in his own special way. Seeing Tak Dong Kyung lamenting about her life while watching the rain fall after an exhausting day at work, Myul Mang comforted Tak Dong Kyung by telling her that being rained on isn’t a big deal. The two also confirmed their feelings for each other and made viewers’ hearts flutter with their passionate kiss. Seo In Guk shared, “The scene itself is so pretty, but Myul Mang’s line of, ‘See, the rain isn’t a big deal. You can just get rained on. If you run while getting rained on, you’ll be home soon,’ seemed to give comfort to not only Dong Kyung, but to all people. It’s a line that gives great comfort to myself as well, so it remains the most memorable in my memories.” 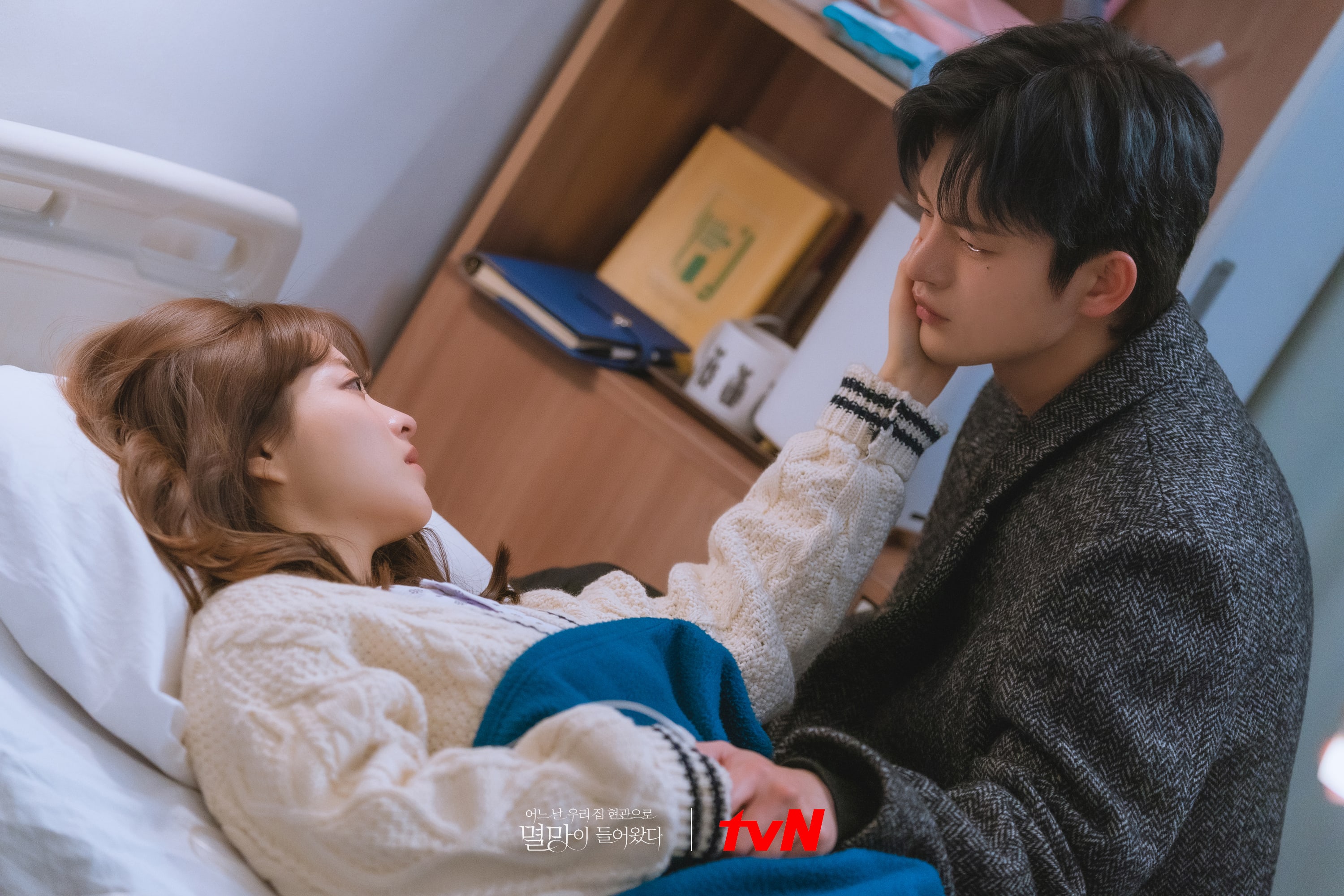 Lee Soo Hyuk’s most memorable scene is Cha Joo Ik’s (Lee Soo Hyuk’s) first kiss in the rain with Na Ji Na (Shin Do Hyun) from 10 years ago, which was when their romance began. In the past, Cha Joo Ik couldn’t simply pass by Na Ji Na who was waiting endlessly in the rain in front of her first love Lee Hyun Kyu’s (Kang Tae Oh’s) house. Cha Joo Ik handed Na Ji Na an umbrella and sweetly kissed her on the lips. Lee Soo Hyuk shared, “There are so many good scenes, but the kiss scene in the rain remains in my memories. In the second half, Joo Ik expresses his feelings for Ji Na by confessing, ‘I liked you from the beginning,’ so the two people’s first meeting feels more sentimental.” He added, “The director also captured the scene so beautifully to create this nice scene.” 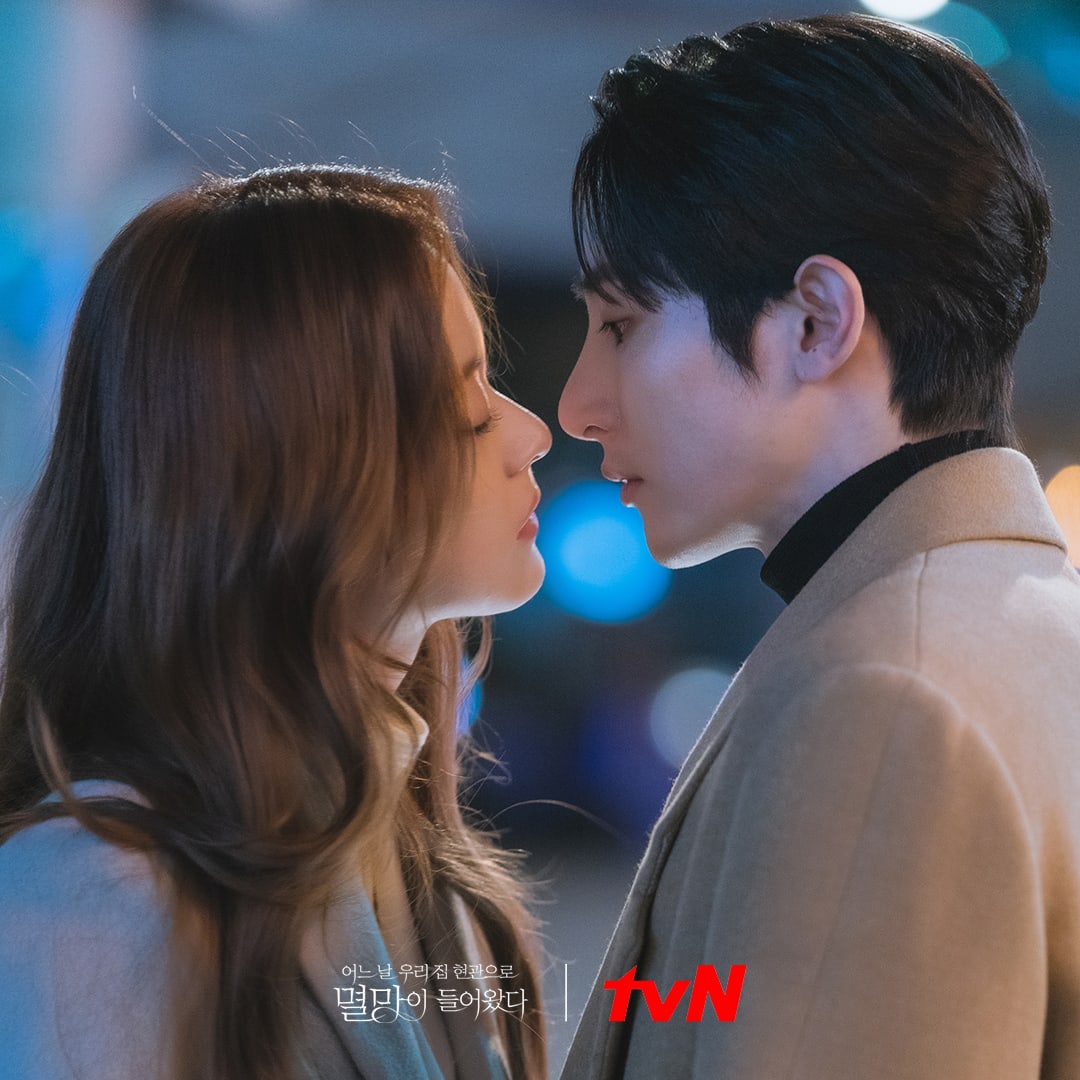 Kang Tae Oh picked the scene in which Lee Hyun Kyu and Na Ji Na visit their alma mater as his most memorable scene. In the past, Lee Hyun Kyu avoided Na Ji Na out of embarrassment because he couldn’t go to college, and the two drifted apart without having officially separated. In episode 14, Lee Hyun Kyu and Na Ji Na visited the school where they first met, and Lee Hyun Kyu opened up about his hidden feelings and apologized, settling their first love. Kang Tae Oh shared, ” It’s the scene in which Hyun Kyu buries his first love in one corner of his heart, allowing him to treasure it as a precious memory at last. I think it’ll remain in my memories for a long time because it’s a more mature and grown-up side of Hyun Kyu.” 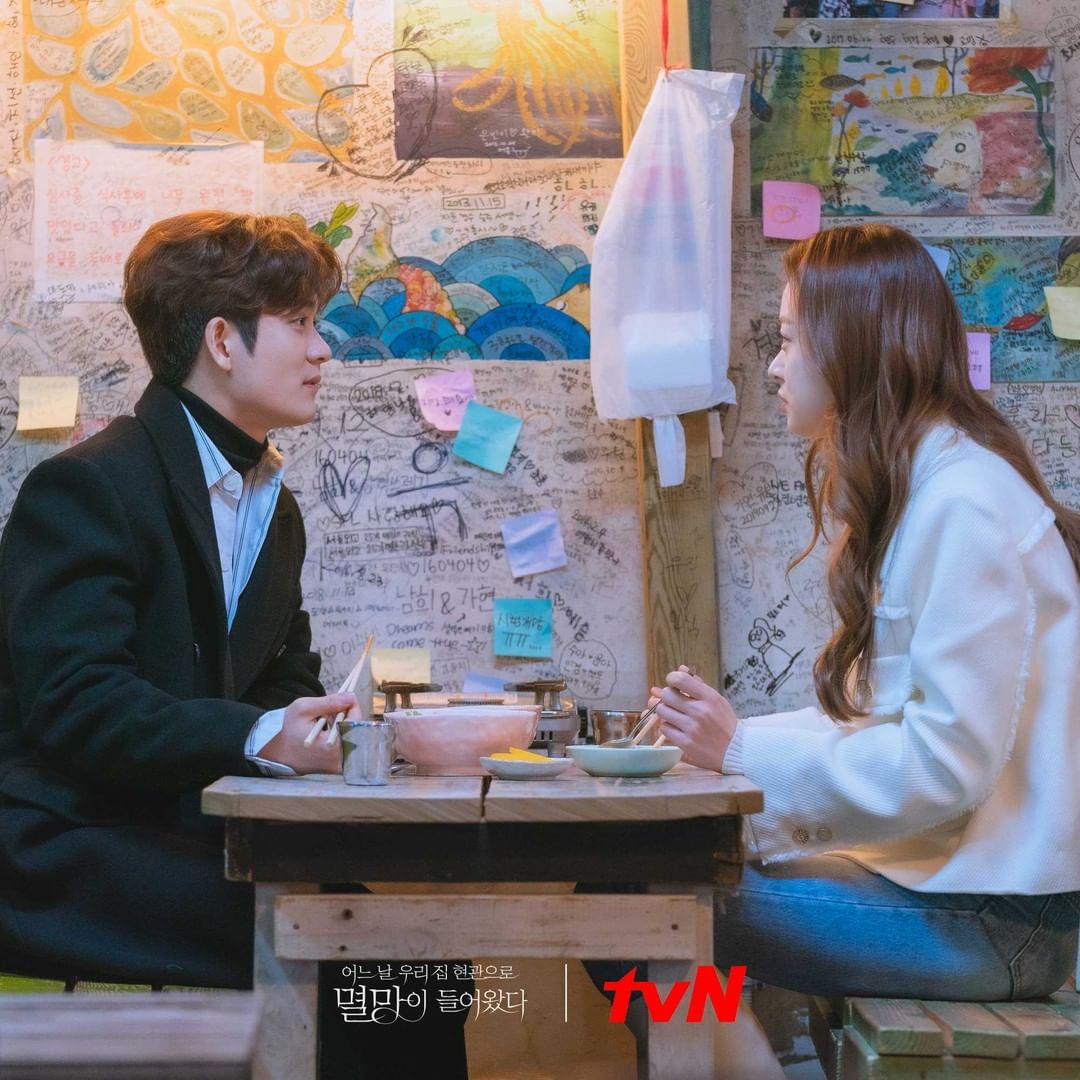 Shin Do Hyun picked the scene in which Tak Dong Kyung and Myul Mang hugged amidst tears while expressing their true feelings at the beach at night. In order to save the people she loves, Tak Dong Kyung chose to say farewell to everyone. However, Myul Mang asked her to express her true feelings, and she stated, “I want to live,” letting out the tears she had been holding back all her life. The couple desperately embraced each other, making viewers tear up. Shin Do Hyun shared, “I feel as if this is the moment in which Tak Dong Kyung, who never showed it when she was tired and didn’t know how to cry, is completely honest to herself for the first time.” She added, “From the perspective of a viewer, I related a lot to Dong Kyung’s feelings, and as a junior actor, I was very awed by Bo Young, who portrayed that feeling very well in this scene. It was the most memorable because it seems to highlight the drama’s entire plot through the love between Dong Kyung, who wants to live, and Myul Mang, who wants to die because he’s alive.” 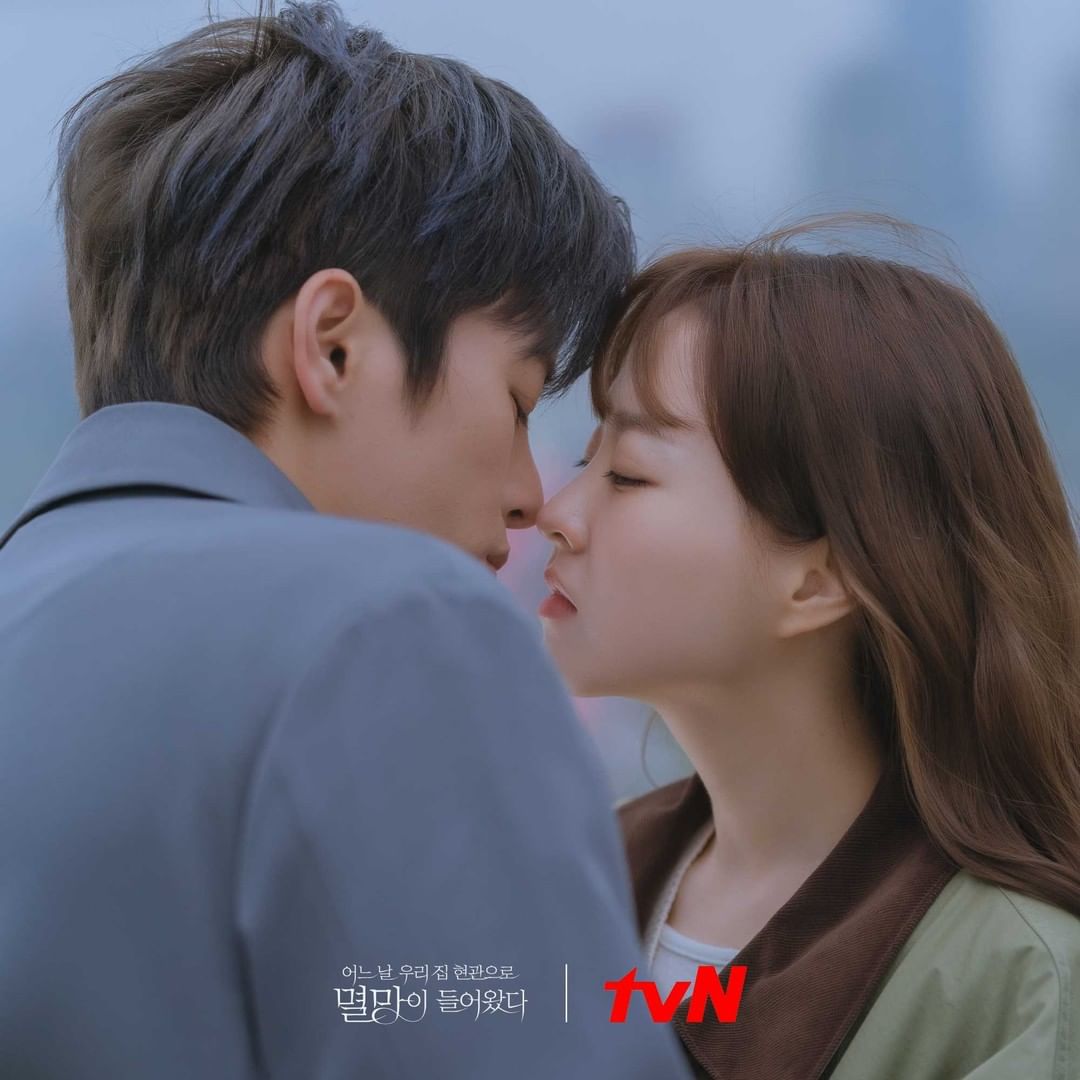