Shin Hyun Soo On Getting Close With Yuri And Jung Il Woo, His Character’s Ending Scene In “Bossam: Steal The Fate,” And More

The final episode of the hit historical drama scored an average nationwide viewership rating of 9.8 percent, breaking its own MBN ratings record. Regarding the success of his drama, Shin Hyun Soo shared, “Viewership ratings are a numerical aspect, and I don’t think there’s a definitive answer. While filming, the director saw the three of us having a discussion with the script. He said that was very beautiful and that we were glowing.” Shin Hyun Soo placed emphasis on the process of filming rather than the results.

The actor shared, “It’s honestly my first time playing the second male lead. That’s why it felt new. It was fun to follow the typical sageuk (Korean historical drama) path that only the second male leads can have. The ending results in death, but I felt a lot of anticipation and enjoyment from portraying the loneliness the second male lead feels in a love triangle and the scene of him wiping away his tears.”

Shin Hyun Soo explained that he knew his character would die at his father Lee Yi Cheom’s (Lee Jae Yong‘s) hands. Therefore, he purposefully created a warmer atmosphere with his on-screen father in the beginning of the drama to show greater contrast with the ending. He elaborated, “Although he can’t be satisfied with death, Soo Kyung was everything to Dae Yeop. In Dae Yeop’s heart, his goal was to protect Soo Kyung. He was satisfied with just the fact that Soo Kyung could live safely, and Soo Kyung was the reason for Dae Yeop’s life. He devoted himself to that Soo Kyung and protected her, so I think Dae Yeop died without any regrets. Rather than fearing death, he died while wishing for their happiness.” 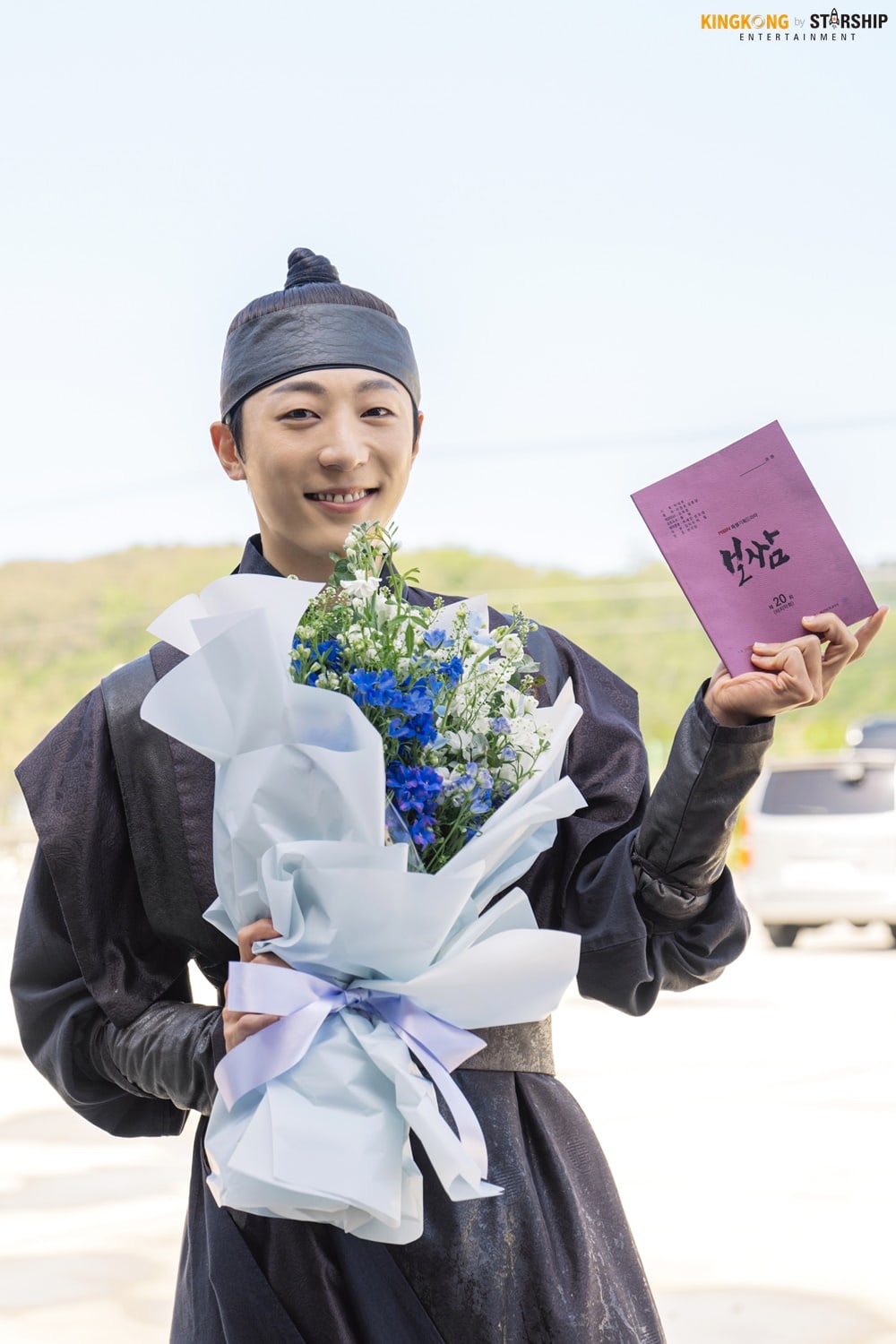 Having filmed from November to May, Shin Hyun Soo shared that Jung Il Woo and Yuri felt like family to him. He revealed, “While monitoring our drama, we send each other messages like, ‘This scene is so good,’ and, ‘We worked really hard then.’ We’ve become close to that extent. There was a lot of time we spent together, and we ate together from time to time, so we are practically family. We couldn’t help but get close. We talked about how to film the next scene even while eating, and I was grateful for that kind of attitude. I tend to enjoy asking for each other’s opinion and conversing, and those two people also weren’t against that. We put our heads together even more and came up with more ideas, so it was fun making the drama.”

The actor couldn’t stop praising his co-stars. He shared, “Jung Il Woo is an older brother and senior actor who has experienced the sageuk genre a lot. An actor’s skill that comes from experience is really exceptional. His portrayal of Ba Woo’s emotional scenes and his ability to lead the narrative are superb, so I learned a lot from watching. He could have had different interpretations from me. I learned from watching the method and skill through which actor Jung Il Woo interpreted things, and it helped a lot with my growth.”

Shin Hyun Soo continued, “I felt on the set that actress Yuri’s feelings towards acting is sincere. Furthermore, I felt that she is a really serious person. Yuri also seems used to making scenarios and creating situations after having experienced acting in plays, so we talked a lot about the script. That kind of work could have been difficult. It could have been difficult physically, but she didn’t show that she was tired even once. She’s a cheerful and refreshing friend, so I received a lot of help from her on set.” Expressing his gratitude to his new colleagues, Shin Hyun Soo shared that they helped him act more passionately.

Shin Hyun Soo also talked about feeling grateful for being able to work despite the COVID-19 pandemic, sharing his hopes that viewers could feel comforted by looking at the beautiful scenery in the drama. Having also starred in JTBC’s “Hello, My Twenties,” “Welcome to Waikiki 2,” and MBC’s “The Emperor: Owner of the Mask,” the actor touched upon his growing international fanbase after the conclusion of his most recent drama. He shared, “I’m grateful that viewers abroad have loved ‘Bossam: Steal the Fate’ a lot as well.”

Regarding the photos and drawings he posts on his Instagram, Shin Hyun Soo shared, “I didn’t learn how to draw.” He added, “I’m abstractly portraying the things I want to express. If the opportunity arises, I want to hold a photo or drawing exhibit.”

The actor revealed that filming the drama had felt like taking on a new challenge for him. He shared, “While filming ‘Bossam: Steal the Fate,’ I expressed and emotionally felt new things that I hadn’t experienced before, so it was interesting and a little bit more refreshing. In the next project, I want to try a new genre I haven’t tried before or take on the new challenge of a different profession.” Shin Hyun Soo briefly mentioned that he is also reviewing his next project.

Watch Shin Hyun Soo in “Bossam: Steal the Fate” below: