A historical fantasy romance drama set in the Joseon era, “Lovers of the Red Sky” is based on the novel “Hong Chun Gi” by author Jung Eun Gwol, whose novels “Sungkyunkwan Scandal” and “The Moon Embracing the Sun” have also been adapted into hit dramas. It’s directed by Jang Tae Yoo, whose past works include “My Love from the Star,” “Hyena,” and more.

The released photos show off the cast’s chemistry and passion from their first script reading back in November 2020.

First off, Kim Yoo Jung plays the role of Hong Chun Gi, the Joseon dynasty’s only female painter, who was born blind but miraculously regains vision. During the script reading, she perfectly depicted her character with her passionate performance that exuded Hong Chun Gi’s bold and courageous charms.

Ahn Hyo Seop showed his unrivaled presence as the blind astrologer Ha Ram, who is able to read the stars despite losing his sight. The actor portrayed Ha Ram in a beautiful and mysterious light and heralded a new major character with his charming acting.

Gong Myung, who has acted in diverse movies and dramas, takes the role of Prince Yangmyung, who appears to be a free-spirited romantic but hides a deep loneliness. The actor will captivate women by transforming into a romantic prince who likes poetry, books, and art.

Kwak Si Yang showed off his charisma with his ardent acting as Prince Joohyang, a cruel and ambitious prince determined to be king at all costs. With this new role, he will show a never-before-seen side of himself and add tension to the plot. 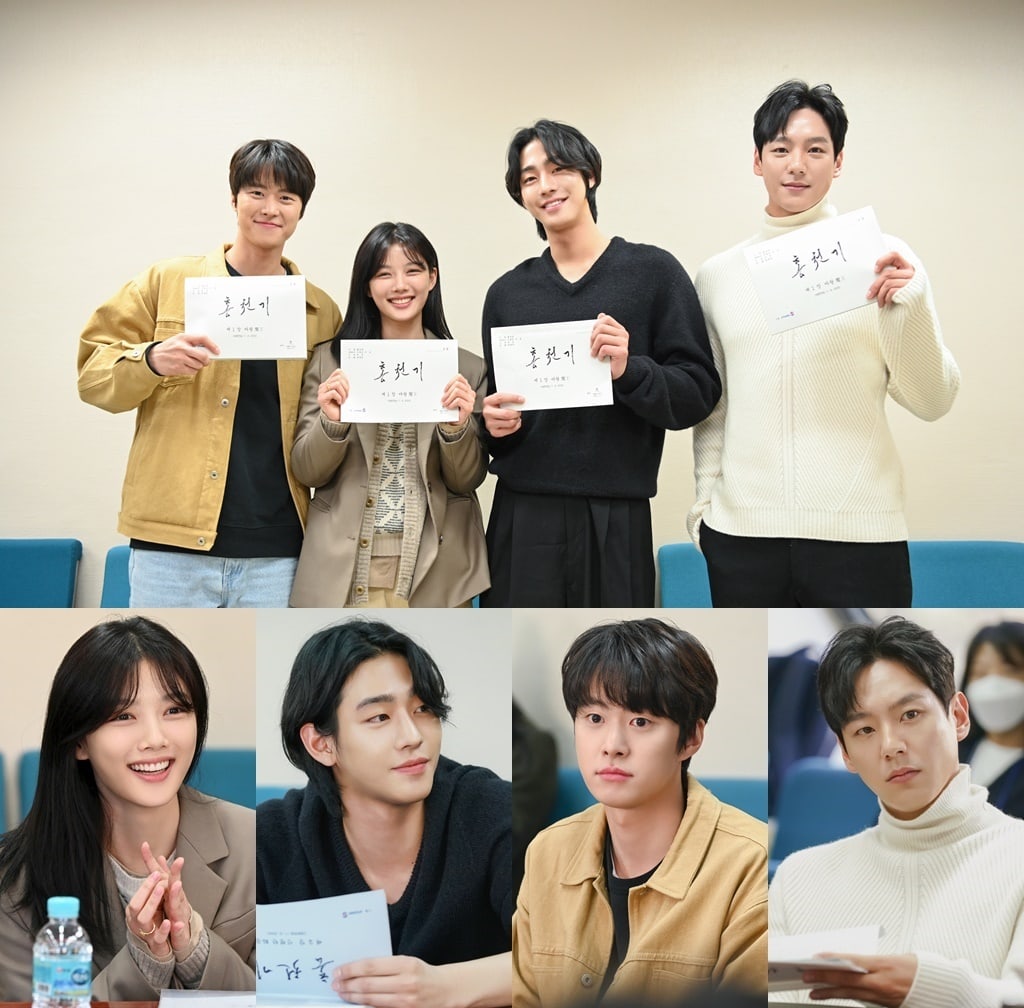 Kim Yoo Jung, Ahn Hyo Seop, and Gong Myung captivated everyone with their fantastic chemistry, and their enthusiastic performances and exciting teamwork have raised expectations for the drama. The addition of supporting actors with solid acting experience, like Jang Hyun Sung, Kim Kwang Gyu, and Moon Sook, heated up the first script reading even more.

The producers commented, “It was a script reading that could confirm the actors’ passionate performances and synergy. It was so lively that each character in the script was vividly felt, and it made everyone look more forward to the story of ‘Lovers of the Red Sky,’ which will be expressed in a video. Please anticipate the fantasy romance of ‘Lovers of the Red Sky’ that is like a painting.”

“Lovers of the Red Sky” premieres in August and will be available on Viki.