Watch: Kang Min Ah And Park Ji Hoon Are Both Playful And Professional During Kiss Scene For “At A Distance Spring Is Green”

KBS 2TV’s “At a Distance Spring is Green” released a new making-of video!

The new behind-the-scenes video begins with Kang Min Ah and Park Ji Hoon filming the scene where her character is drunk. When filming, both actors are professionally immersed into their roles. However, when it’s breaktime, they comfortably discuss various topics. Kang Min Ah comments, “I bet I’ll be really full if I drink four or five cans [of beer].” Park Ji Hoon mentions she should drink soju instead, and Kang Min Ah jokes, “If that happens, it won’t be like this. I’ll just throw up instead.” 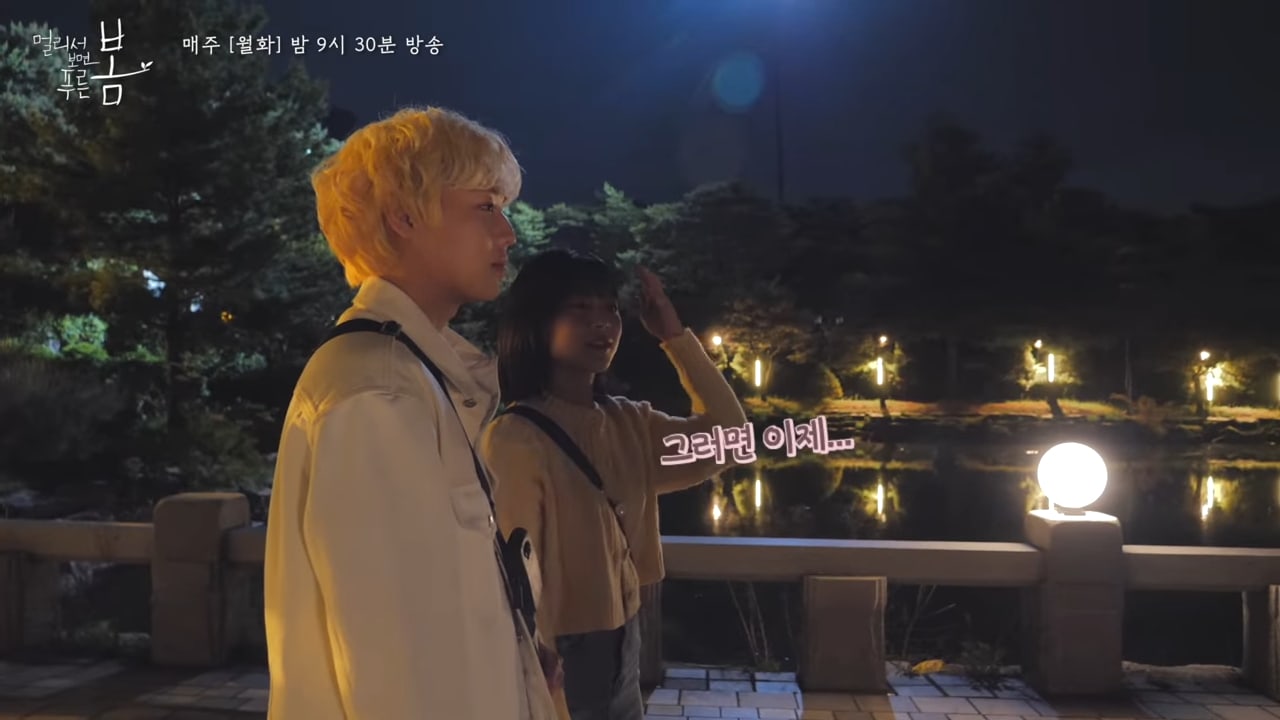 The two actors also get together to film the scene where he gives her a piggyback ride. They rehearse their lines with Kang Min Ah on Park Ji Hoon’s back. When she forgets her lines, she sheepishly laughs, and he admits he left out something too. After reviewing the script, Park Ji Hoon apologizes for forgetting a line, and Kang Min Ah points out that he’s the one having a hard time right now since he’s carrying her. 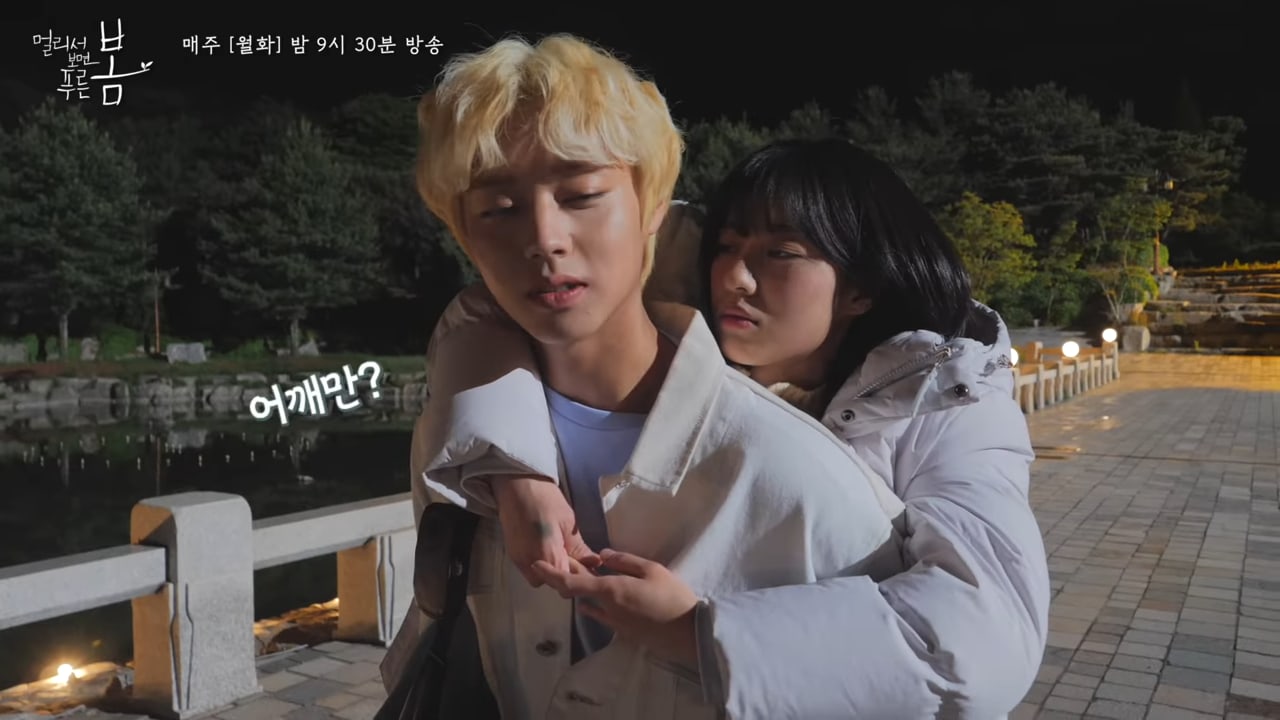 Later on in the video, Kang Min Ah and Park Ji Hoon reunite for their memorable kiss scene. Kang Min Ah comments, “We came to a prettier place [than where we filmed last time]. The wind isn’t blowing right now. This is an important scene, so I really hope the wind will continue to not blow.”

Park Ji Hoon helps Kang Min Ah practice her lines, and he’s both serious and playful as he reads his lines for her. Then they try out different positions to create a more romantic moment. Even though they’re slightly awkward, they still manage to lighten the atmosphere with their jokes.

Before the crucial kiss scene, Kang Min Ah jokes that all the pressure is on Park Ji Hoon. She says, “It’s all up to you. I’m just going to stay still.” Park Ji Hoon agrees and laughs with her.

The moment is finally here, and both actors dive into professional mode as they perform the emotional scene. After they successfully wrap up filming, they run into their senior actors Cha Chung Hwa and Lee Roo (Eru). Cha Chung Hwa, who knows they just filmed a kiss scene, jokes, “Hurry up and go put on some lip balm. Apply an ice pack too!” 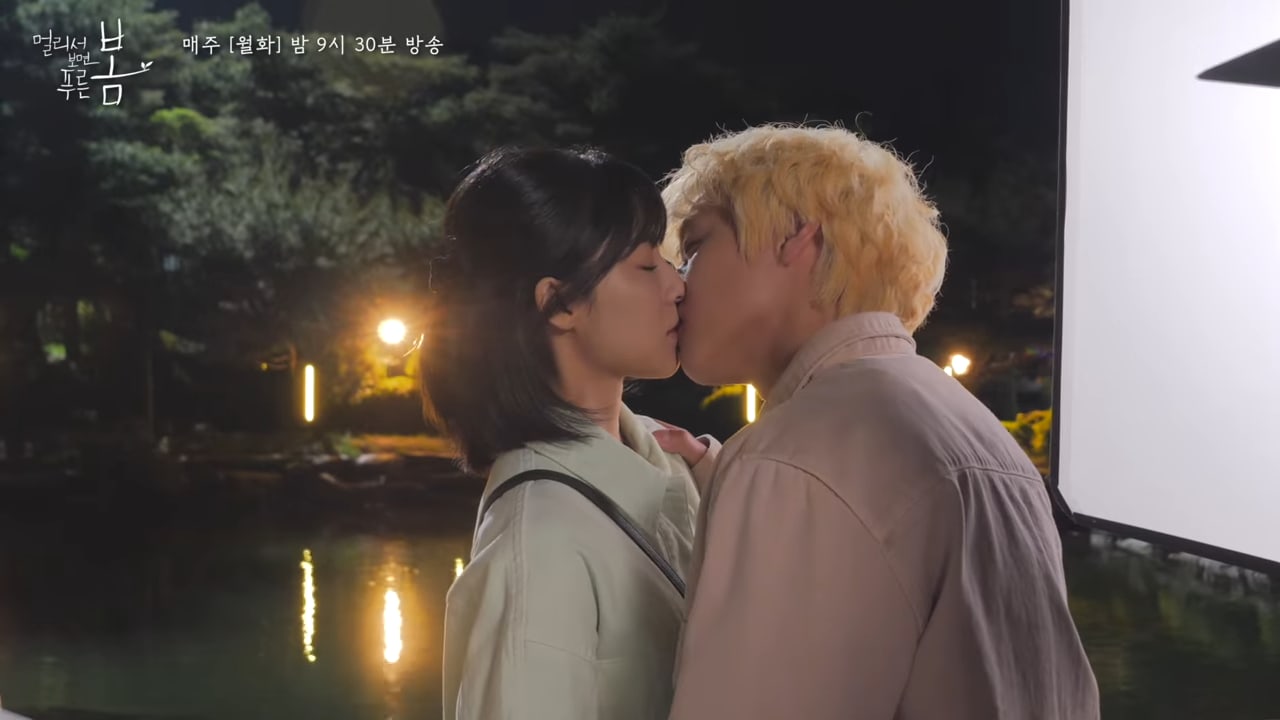 Eru
Kang Min Ah
Park Ji Hoon
Cha Chung Hwa
At a Distance Spring is Green
How does this article make you feel?