The video kicks off with Jo Jung Suk, Ahn Eun Jin, Shin Hyun Been, and Kim Dae Myung getting ready to enjoy the tteokbokki (spicy stir-fried rice cakes) that their characters would eat during the scene. Jo Jung Suk takes a look at Kim Dae Myung’s script and gets playfully irritated that he didn’t highlight his own lines as well. Playing along, Kim Dae Myung pretends that he forgot to highlight them, leading Jo Jung Suk to joke that he really would highlight his lines next time. 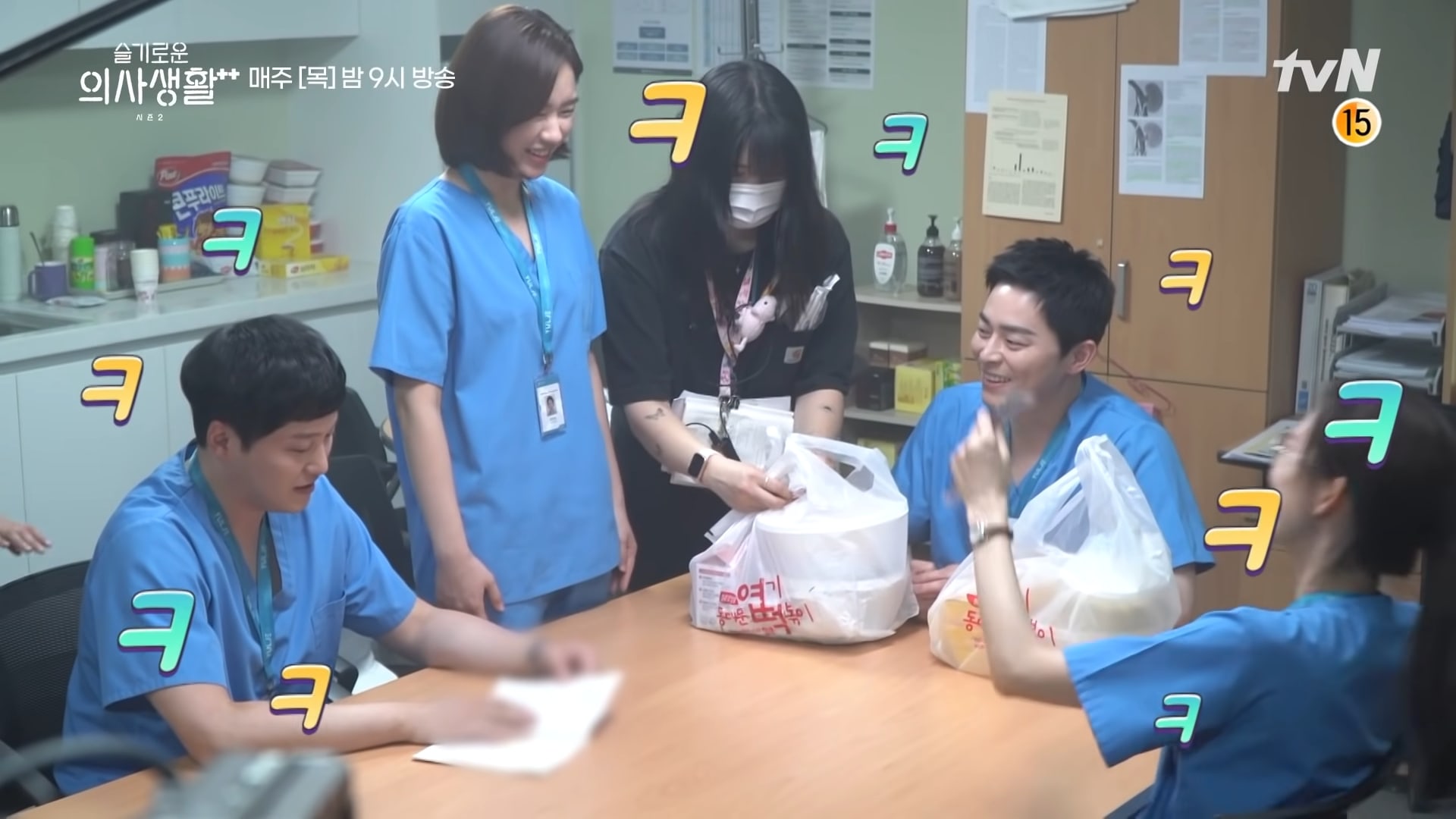 The scene then grows somewhat chaotic as Ahn Eun Jin drops her chopsticks and Jo Jung Suk accidentally cuts off Shin Hyun Been’s lines. Yoo Yeon Seok then enters, laughing at the fact that his only lines in the scene pertain to how spicy the food is. The hilarity continues as he fails to open up his chopsticks on the first try, and later on Kim Dae Myung ends up cutting off Jo Jung Suk’s lines.

Next up, Jeon Mi Do finds it difficult to sing off-key as she walks across the hospital grounds. Afterwards, Jo Jung Suk jokes that if she keeps it up she may not be able to sing anymore, and the pair can’t stop laughing at her continuous attempts to make her voice crack. 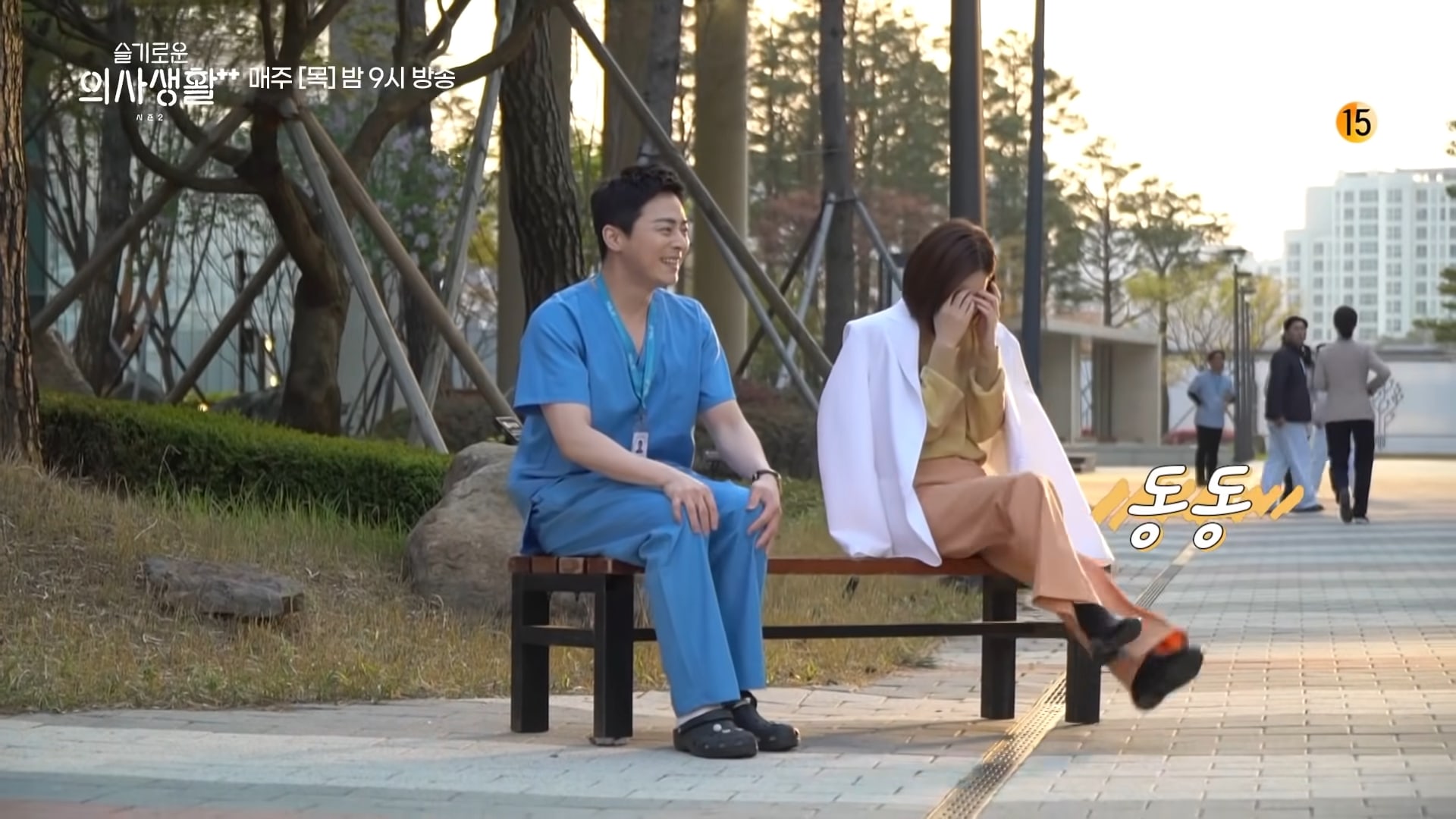 During their band practice, Jeon Mi Do shows off her skills on the piano while Jo Jung Suk and Yoo Yeon Seok provide the harmony. Later on when the group begins filming, Jung Kyung Ho suddenly lets out a yell. When everyone looks over in surprise, they find out that he had played the wrong chord on his guitar, and they all burst into laughter. During the next take, it happens again, and Jung Kyung Ho drops to his knees in apology.

In the following scene, Jo Jung Suk practices a gag where he draws letters on his hands. After filming once, he realizes that he has to erase the letter on his hand despite it being written in permanent marker. Jo Jung Suk proceeds to amaze the producers when he easily wipes it off with a wet wipe, bragging, “I applied hand cream before this.” When his declaration draws sounds of admiration from the surrounding staff, he continues with a proud smile, “Don’t compare me with those other guys. I wish they could see me like this.” 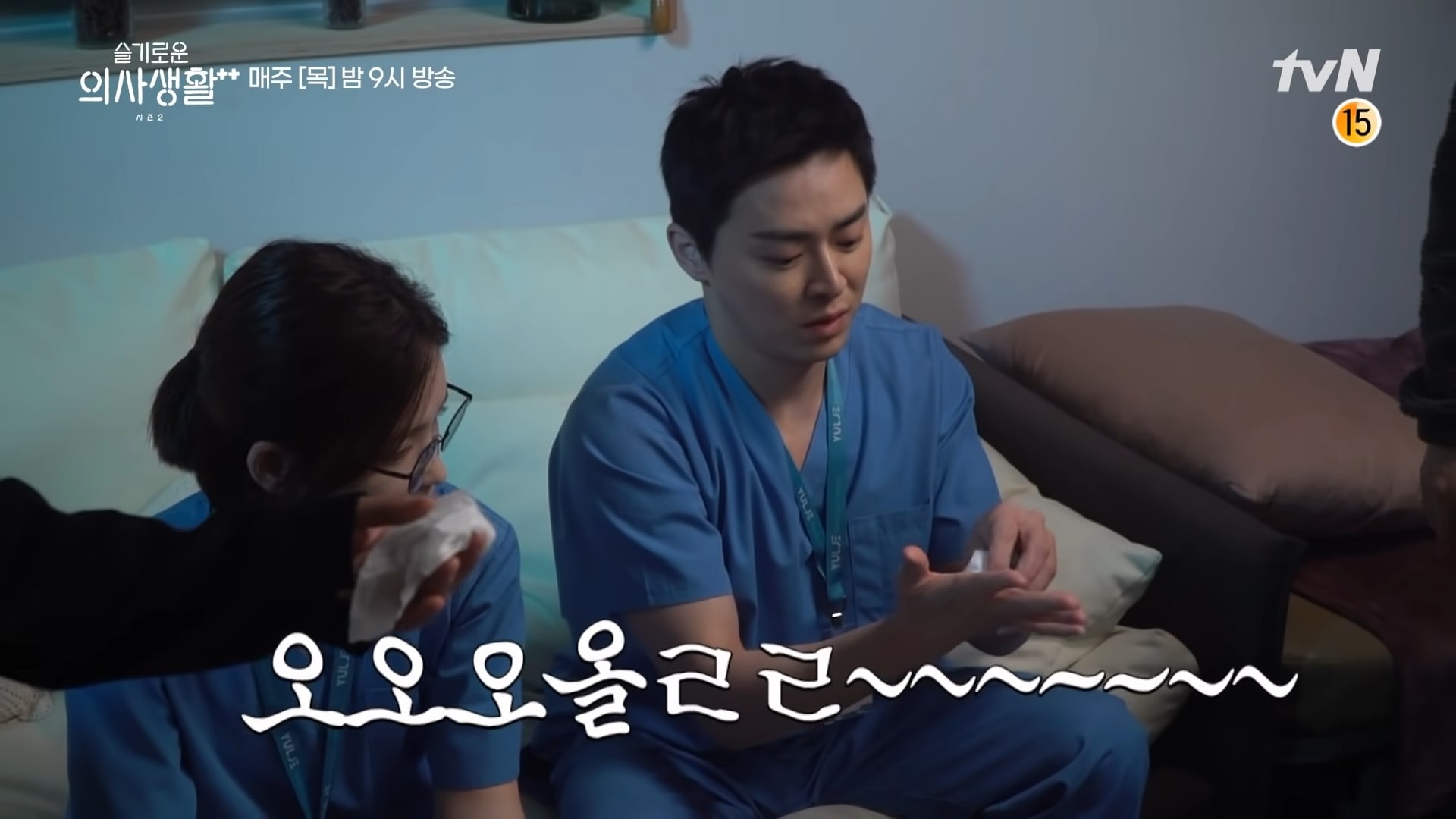 In the video’s final clip, child actress Oh Eun Seo steals the hearts of everyone around her with her resounding laughter. When Yoo Yeon Seok asks her what’s so funny, she just keeps laughing, leading him to speculate that she just laughs whenever she looks at him. Despite her excitement, Oh Eun Seo perfectly carries out her scene with Yoo Yeon Seok, and everyone grows amazed at her professional attitude. However, the moment the scene finishes she breaks into laughter again, creating an enjoyable atmosphere on set.

Also check out Jo Jung Suk in “Oh My Ghostess” below!