At the Tokyo Olympics, people noticed that one of the badges on An San’s shirt was a radish badge that symbolized MOOMOOs, MAMAMOO’s fandom. This caught the attention of none other than MAMAMOO’s leader, Solar, who posted a photo of An San and her badge on her Instagram Stories and wrote, “When you return to Korea, I want to pick you up and run away.” (This is a saying that basically means the other person is particularly cute or adorable.)

In response, An San reposted Solar’s post and wrote, “My tears are flowing… I love you so much… I’ve had this badge since [20]17, but I’m so grateful… I love you… Is this a dream… Why am I appearing on Yongsun [Solar’s real name] unni‘s Stories. This makes no sense… I can’t believe it… I’m okay even living in Yongki [Solar’s pet dog]’s house, so please pick me up. No, well, anyway… I like you so much.” 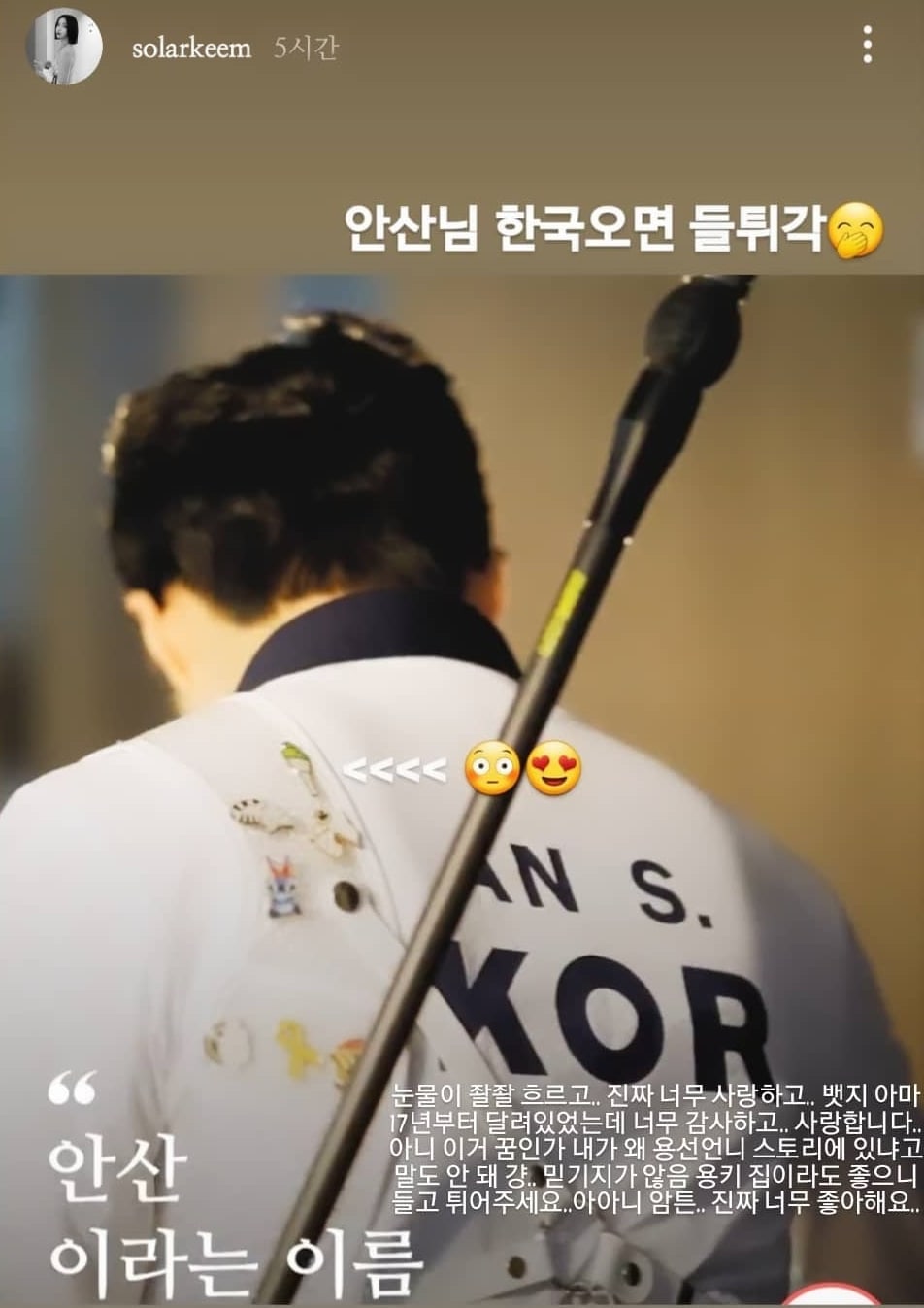 An San also appears to be a fan of the girl group WJSN. On the platform Universe, WJSN’s Eunseo wrote, “Did [archer An San] follow me? Amazing. I believed that you would win gold! Stay strong, I’m cheering for you.” An San took a screenshot of the message and wrote back, “Everyone, please listen to WJSN’s ‘I-YAH,’ ‘Cantabile,’ ‘Tra-La,,’ and ‘You, You, You.’ Thank you!” WJSN’s Yeoreum also sent her a message of support saying, “I heard that you followed us, thank you and stay strong!,” and An San responded, “Thank you so much for cheering me on. I love you. Please listen to WJSN’s ‘Oh My Summer.'”

An San, who was born in 2001, is an archer who represents the Republic of Korea (as South Korea is officially known at the Olympics.) At the Tokyo Olympics, An San set a new Olympic record in the women’s ranking round on July 23, and she and her partner Kim Je Deok won the gold medal in the mixed team archery event on July 24. On July 25, she and her teammates Jang Minhee and Kang Chae Young won the gold medal in the women’s team archery event, marking the ninth consecutive time that South Korea has won this event since it was introduced in 1988. South Korea historically dominates archery at the Summer Olympics, with 41 total medals and 25 gold medals earned since 1984.

An San will compete in the individual women’s archery event starting on July 27.

MAMAMOO
WJSN
Solar
An San
How does this article make you feel?