Cha Tae Hyun, Krystal, And Jinyoung Are Ready To Take On Any Case In New Poster For “Police University”

“Police University” will tell the story of the chaotic investigation that ensues when a professor at an elite police university teams up with his students—one of whom is a genius former hacker. B1A4’s Jinyoung and f(x)’s Krystal will star as university students Kang Sun Ho and Oh Kang Hee, while Cha Tae Hyun will star as passionate detective and professor Yoo Dong Man.

The new poster for “Police University” uses a refreshing concept to capture each of the character’s unique charms as the actors flawlessly transform into their characters.

Yoo Dong Man, who has become a professor at the police university after experiencing all sorts of hardships as a veteran detective, has a deep gaze and an impressive aura despite his uncaring expression. He appears to be the “control tower” as he poses with leisure above Kang Sun Ho and Oh Kang Hee. The text next to him reads, “A professor who wants to go back to being a detective,” raising anticipation for how he’ll lead the students in the joint investigation that begins at the university.

Kang Sun Ho seems to have found evidence as he fixes his line of sight somewhere while holding a pistol. He creates a sense of tension with his sharp gaze and professional aura. The laptop in his hand hints at Kang Sun Ho’s background as a genius hacker, and the text next to him further describes him as “a hacker who wants to be a police officer.” Viewers are curious to find out if former hacker Kang Sun Ho, who has lived life without any desires, dreams, or a sense of presence, will be able to safely enter the police university.

With proper posture and an unwavering gaze, Oh Kang Hee is a new student at the police university who is resilient to the core. Her expression is full of spirit and without a hint of fear, creating a refreshing and youthful atmosphere. In addition to fierce action scenes, Krystal will express Oh Kang Hee’s direct personality as someone who can’t stand injustice. The text next to her reads, “Judo girl who dreams of becoming a police officer.” 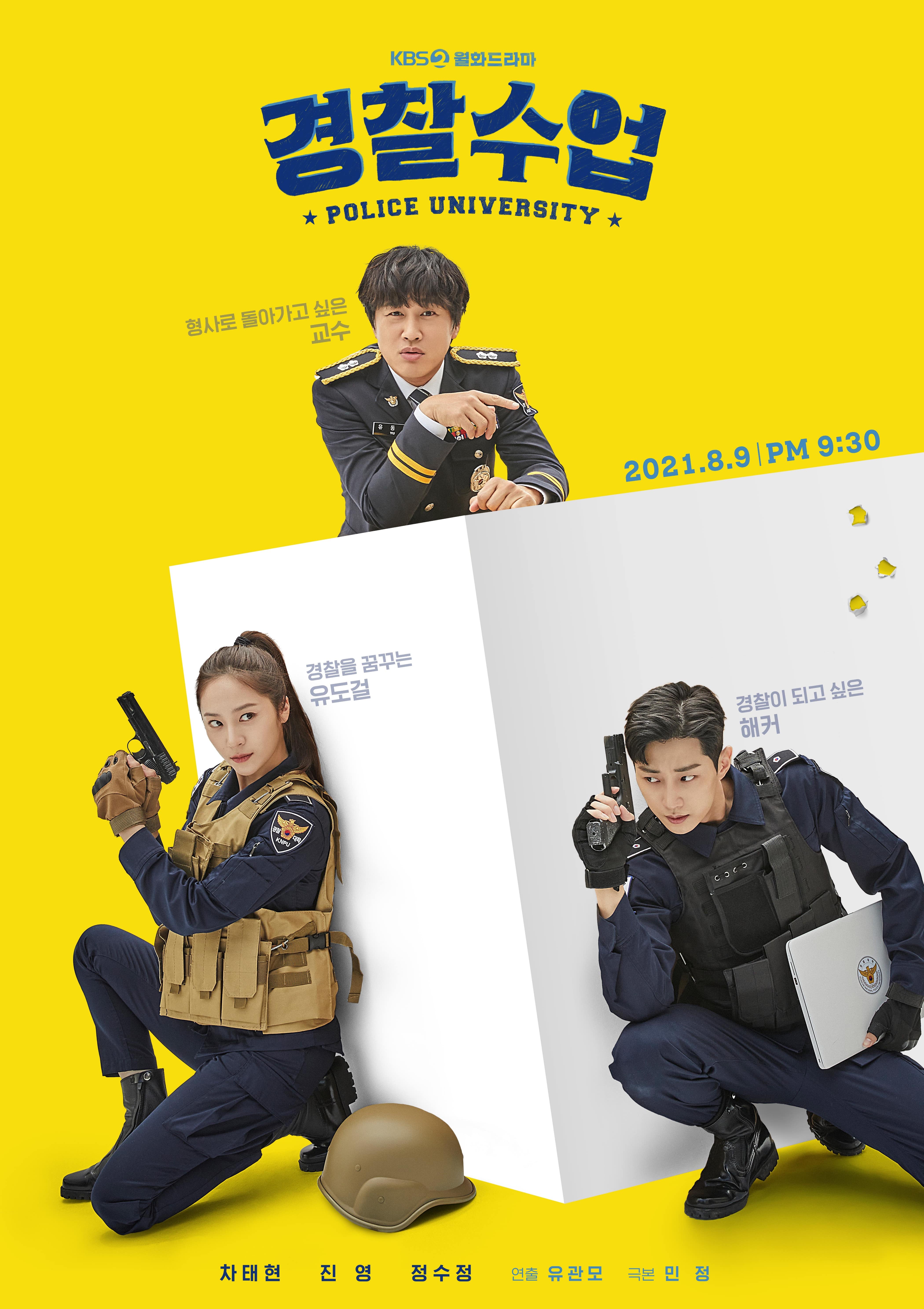 The production team shared, “Veteran detective Yoo Dong Man, genius hacker Kang Sun Ho, and rising judo star Oh Kang Hee have different personalities and charms, but they’ll meet at the police university and mature in their own ways after experiencing twists and turns together. In that process, laughter and tears will coexist, so we think many people will be able to relate. In particular, please anticipate their exciting story, and find out how they’ll cooperate to carry out an investigation together when they encounter a grave situation.”