The first teaser poster has been revealed for tvN’s highly-anticipated drama “Yumi’s Cells”!

“Yumi’s Cells” is a drama based on a hit webtoon about an ordinary office worker named Yumi, told from the perspective of the brain cells in her head controlling her thoughts, feelings, and actions. Kim Go Eun stars as Yumi, Ahn Bo Hyun as Goo Woong, Lee Yoo Bi as Ruby, Park Ji Hyun as Sae Yi, and GOT7‘s Jinyoung as Yoo Babi. SHINee’s Minho will be making a special appearance as Woo Gi.

“Yumi’s Cells” will air across multiple seasons. It is directed by Lee Sang Yeob, the director of “Familiar Wife” and “Shopping King Louie,” and co-written by “Find Me in Your Memory” writer Kim Yoon Joo and newcomer Kim Kyung Ran. “W” and “Memories of the Alhambra” writer Song Jae Jung has participated as a creator.

In the teaser poster, Kim Go Eun charms with her bright smile. Her adorable cells are peeking over the bulletin board that has Kim Go Eun’s photo posted on it. The small notes on the board introduce the directors and writers. Some of them describe Yumi, with one that reads, “Daehan Noodle Kim Yumi,” referring to the company she works at, and another one that says, “What is love…?” The biggest note on the top left side reads, “Don’t forget that you’re the main character of this story.” 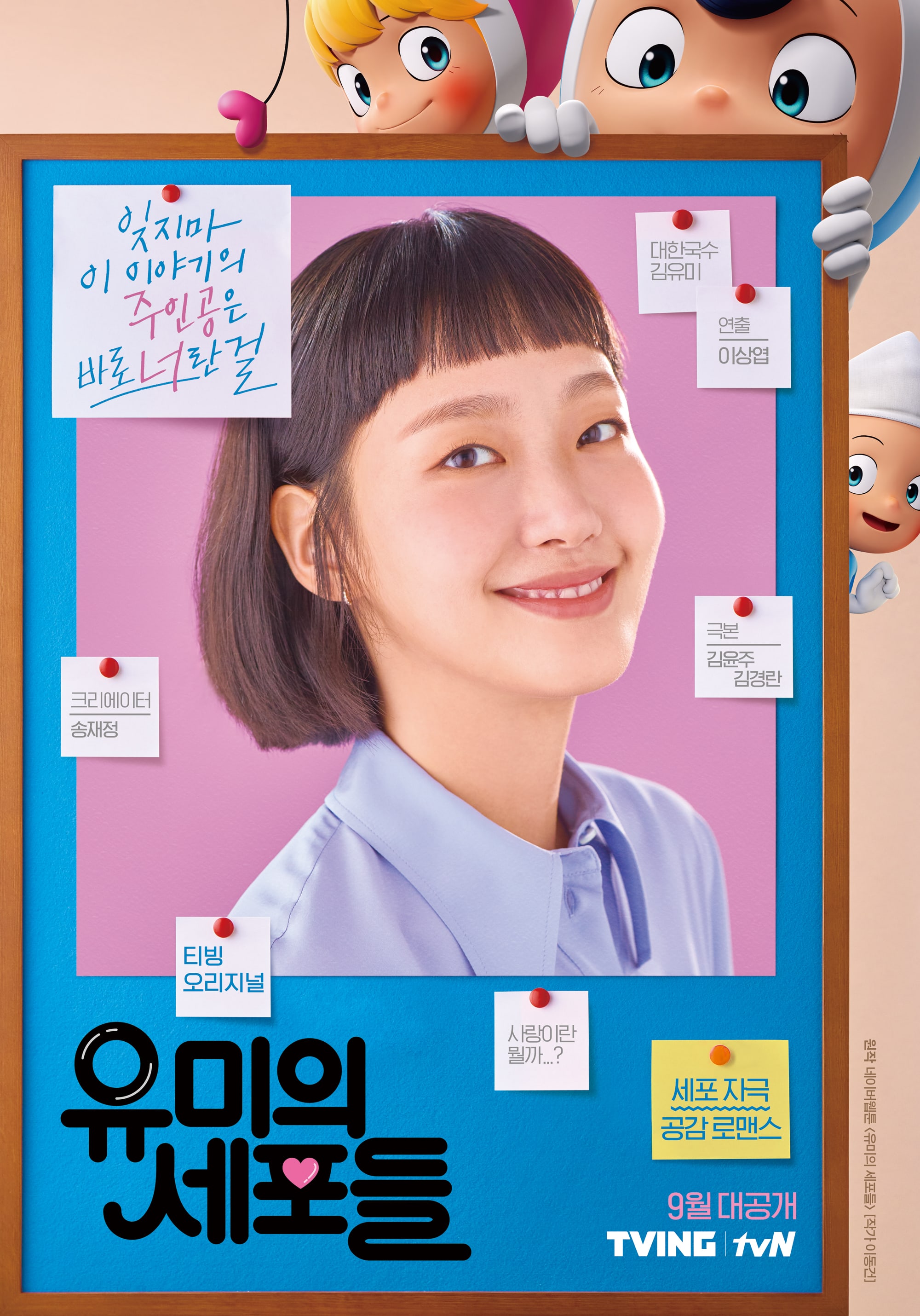 Kim Go Eun will be transforming into the ordinary office worker Yumi. Tired of her repetitive and boring life, she dreams of finding sweet romance. When she one day finds someone who makes her heart race, the town of cells in her mind goes into a frenzy. Yumi’s cells, who exist for Yumi and because of Yumi, will hard carry her life. The fresh chemistry between Yumi and her cells will be especially fun to watch.

Playing the relatable character of Yumi, Kim Go Eun picked “ordinariness” as the charm of the drama. “It deals with the small things that can happen to anyone, rather than dramatic and novel things, so I think many people will recall their past memories and relate to the drama,” she explained. Kim Go Eun also shared, “Because it’s a production that combines animations and real-life people, I’m acting while keeping in mind that everything has to mix together well without one certain part standing out. I’m waiting with anticipation and excitement to see how the new attempts will turn out.”

“Yumi’s Cells” is the first Korean drama to combine live action and 3D animation to create a new format of content. The original webtoon is loved by many for its creative idea of personifying cells and for portraying every-day situations in a novel way. LOCUS Animation Studio will animate and bring the dynamic town of cells to life.

“Yumi’s Cells” will premiere in September through tvN and TVING.

Kim Go Eun
Yumi's Cells
How does this article make you feel?