You have probably heard a lot about Junho lately. He is one of the six members of the second-generation K-pop group 2PM, and he is all the rage right now in Korea. With his quirky charm and ability to be talented in basically everything he does, Junho has won the hearts of many over the years and even more so these days.

If you’re looking for some reasons to obsess over him or need a bit of a refresher, here are nine reasons why we’re all a tad bit obsessed with Junho.

1. He can dance and looks really good doing it

For as long as 2PM fans can remember, Junho was known as being one of the best dancers in the group. Whenever they appeared on variety shows, the MCs would always ask him to do a dance and would sometimes even have him compete against other dancers – he was that good. Junho is not only good at acrobatic dancing, but he can also do the suave type of dancing that makes your heart race.

Check out this video of him showing off his undeniable talent:

2. He’s also an actor and very talented at it

Actor Junho’s debut role was as “Squirrel” in the film “Cold Eyes.” Immediately after debuting, people were thoroughly impressed with his part in the movie. Although it was a smaller role, he really showcased his versatility in showing various emotions. He continued to broaden his acting skills by taking on various roles in K-dramas that continues to be talked about today. His roles in the dramas “Memory,” “Good Manager,” “Just Between Lovers,” and “Confession” were all very memorable.

Check out this heartbreaking scene from “Just Between Lovers” that really showcases his acting skills:

Watch “Just Between Lovers” below:

3. He’s got those blessed rainbow eyes when he smiles

This goes without much explanation. Junho’s smile and rainbow eyes can brighten even the darkest of days.

Fans were delighted to get a glimpse into Junho’s solo lifestyle when he re-appeared as a guest on “Home Alone” (“I Live Alone”). His lifestyle seems very active as he likes to fill his days by being very productive. One of the skills he has continued to develop is learning Japanese. Because he is an active singer in Japan – and very successful in the country – he continues to engage in conversational Japanese, and it was revealed on the show that he is very fluent in it!

Here is a clip of him showcasing his bilingual skills:

Catch Junho’s episodes on “Home Alone” with subtitles below:

Another part of Junho’s life that was revealed on “Home Alone” was his several cats. He has a soft spot for rescuing cats and has shown that he rescued some of these cats because of the sad look in their eyes. There is nothing quite like someone who has such a big heart for animals!

Junho also frequently takes photos of his cats at home:

He produced and composed all the songs on his second Japanese mini album titled “FEEL” in 2014. Along with these songs, Junho has composed and co-composed many other songs on several 2PM albums.

Here is his self-produced track “FEEL” which Junho fully produced:

Junho was an honorary ambassador of the 24 Hour Famine that is hosted by World Vision. This initiative is to recognize third world countries and the suffering they endure as a result of the lack of resources and food to survive. It was also revealed when he was appointed that he had been sponsoring a child since 2010. He’s got a heart of gold, what can we say?

“To help others in a greater way is the type of influence I would like to have.” -Junho 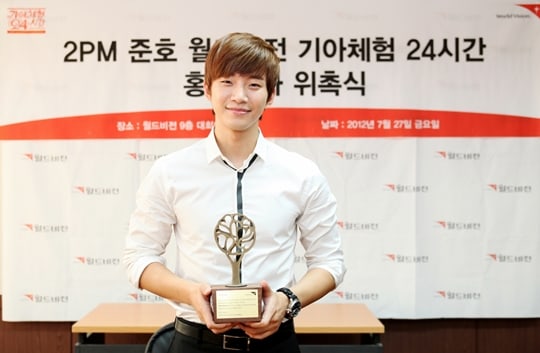 Junho has had enough kiss scenes in his repertoire of K-dramas and movies for people to see that he can kiss – and is very talented at it. The passion and feeling that he puts into these scenes are always so heart-fluttering!

Check out the kiss scene from “Memory” that has garnered a fairly high number of views:

9. He works hard and is positive

Fans have called him “ambitious Junho” because he puts passion into everything he does. He has always had this drive since he was a child, which is probably why he has all the success today. He possesses many traits that are so attractive and admirable!

Check him out in the series “Wok of Love“:

Hey Soompiers, are you a fan of Junho? What is your favorite thing about him? Let me know in the comments below!

Soompi Spotlight
2PM
Lee Junho
How does this article make you feel?