TXT Explains Meaning Of New Single Title, How They’ve Changed Since Their Debut, And More

On August 17, TXT held an online showcase for their repackaged album “The Chaos Chapter: FIGHT OR ESCAPE”!

Regarding their latest title track “LO$ER=LO♡ER,” Taehyun commented, “It describes the feeling of wanting to be a lover to this one specific person, even if you’re a loser in the eyes of the world.”

Soobin added, “It captures the romantic emotion of a boy saying, ‘In order to save you, I would stand against the world and fight, even if I might fail, or I would run away with you.’ It’s a love song unique to TXT.” 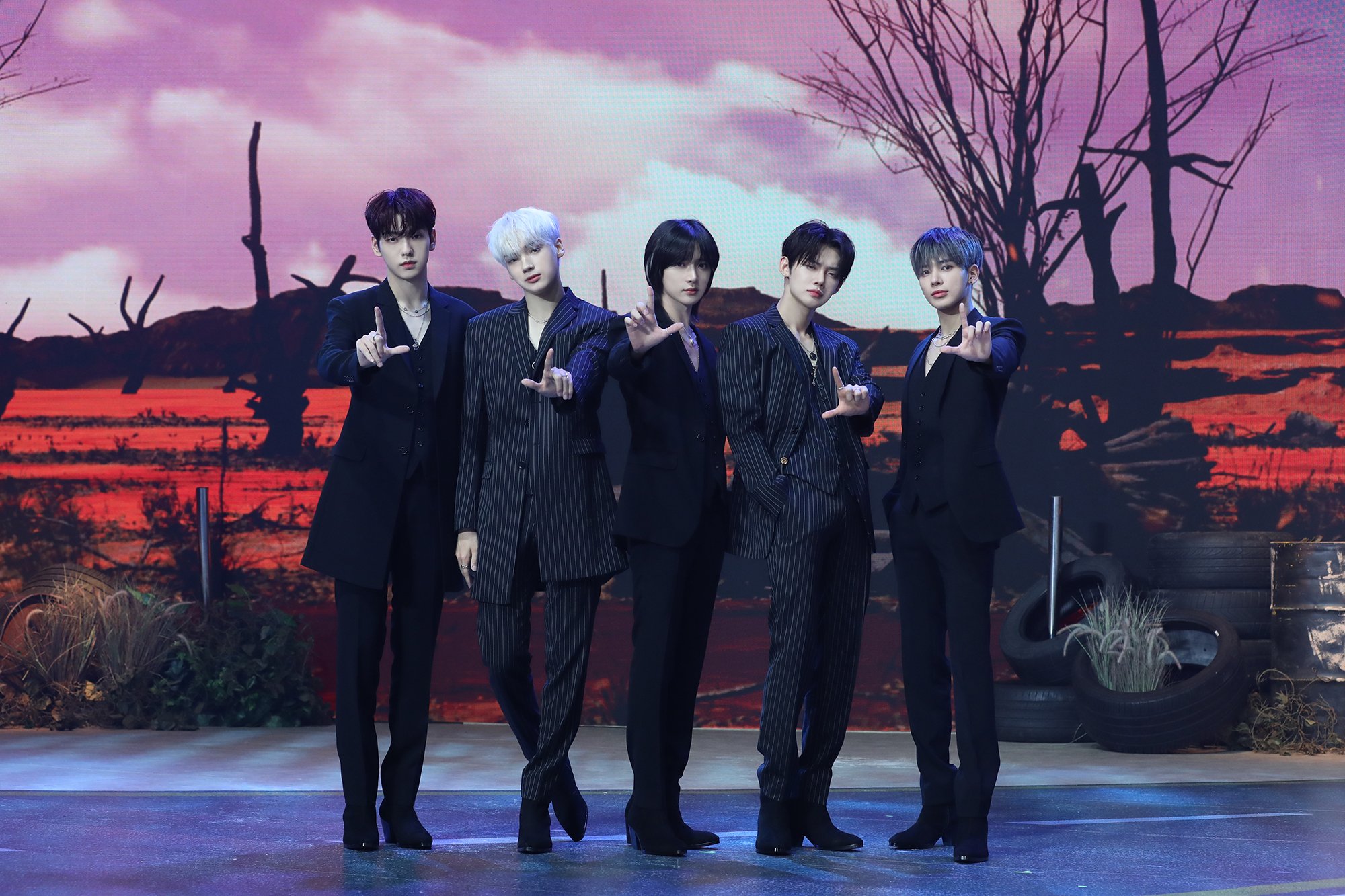 As for the dollar sign included in the name of the song, Soobin explained, “The reason we used the dollar sign in the title of our song is to represent the need people have for money. It also implies that while we dislike how much adults obsess over money, we dream big because you and I still need money.”

Yeonjun commented, “Honestly, rather than admit the importance of money, I thought that happiness came first. However, after starting to work early on in my life, I’m realizing that money is a necessity.”

In line with the title of their album, TXT was asked whether they were the type to fight or escape. Taehyun chose adapting, while Soobin chose fighting. Beomgyu shared honestly, “I became a trainee after passing my audition and made my debut after my trainee days, but there was always an obstacle to overcome. In that process, I felt a lot of frustration, but our promotions for our last album became a big turning point for me. Even within the same situation, if I felt unhappy before, I now accept that those are my feelings and try to find a positive outlook within that.”

Huening Kai remarked, “Since I experienced a lot of tribulations while I was a trainee, I had a lot of resentment towards the world. I tried to change my mindset and look at the positive side of things, and I worked towards maturing on a large scale rather than feeling defeated.” He added, “Realistically, however, I think focusing on the present is better than fighting or escaping.”

Despite only having celebrated their second anniversary this spring, TXT has had impressive success, debuting at No. 5 on the Billboard 200 with their latest album and taking over Japan’s Oricon album chart. Taehyun shared, “When we first heard that we were No. 5 on the Billboard chart, the members talked about how we couldn’t believe it. Since many people are giving us love from all around the world, we were determined to give them good music. We hope that the sincerity of the message we try to convey through our music is getting through, and we believe that if it is, there will be even greater results.”

The group also talked about their senior labelmate BTS, who has been recording a historic run on Billboard’s Hot 100. Yeonjun commented, “Hearing about our seniors made us so happy, and we felt so inspired. It’s so great that we have such amazing seniors close to us, and although there is pressure, we think it’s inevitable. In order to overcome that pressure, we’re setting stricter standards for ourselves, and we believe that we’ll be able to prove ourselves with good songs and good music.” 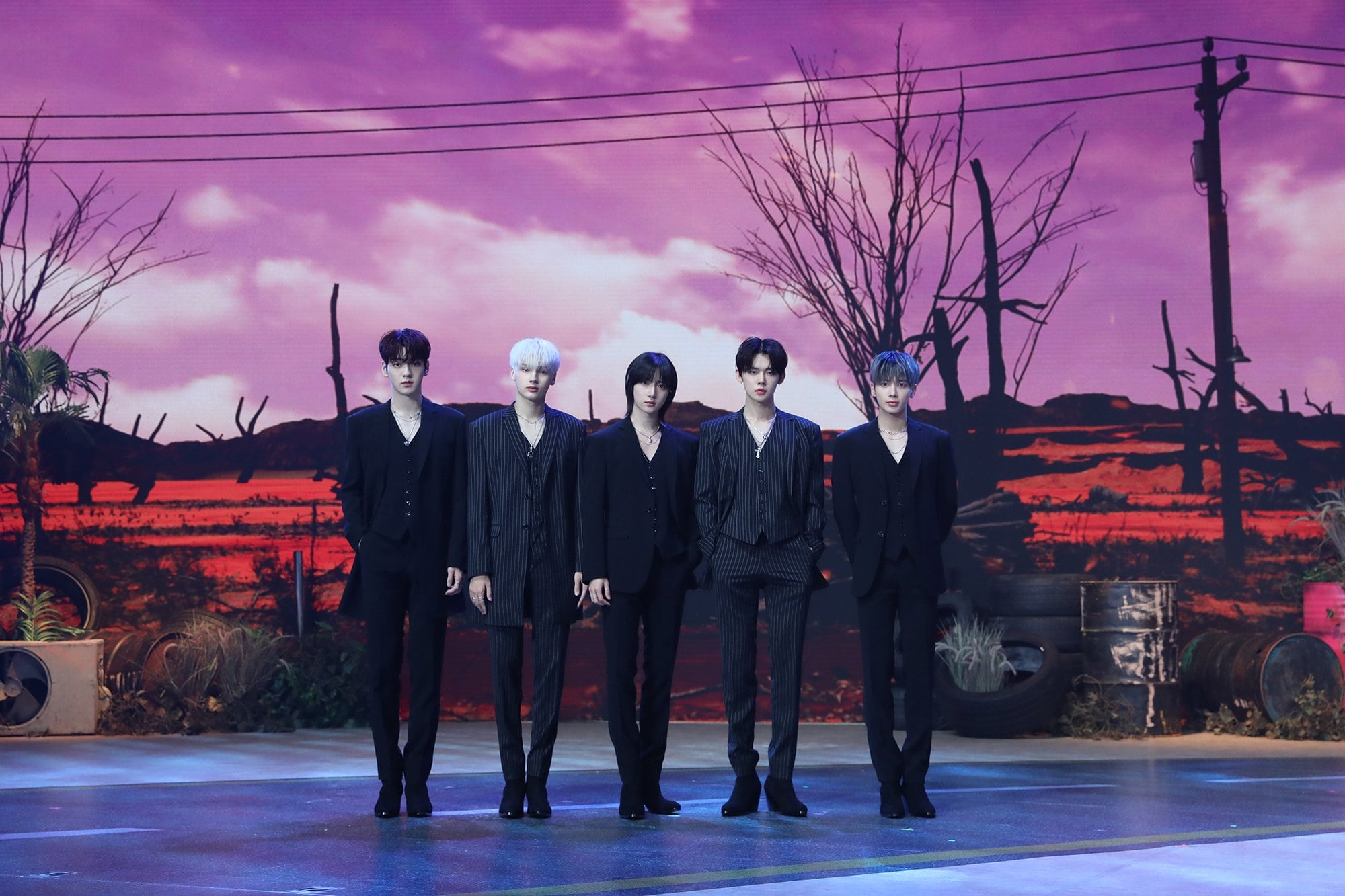 Lastly, the group was asked why they think their music receives so much love. Beomgyu answered, “I’ve often heard people say, ‘I heard a song and thought, “This sounds like a TXT song,” so I looked it up, and it really was one of their songs.’ No matter what genre of music we make, I believe that our sound is becoming more defined, and I think that music that captures our unique color is our strength.”

He continued, “I don’t know if it’s because we’ve been telling our own stories, but people our age are able to relate a lot [to our music]. Although it could be a bit different depending on the generation, there are definitely things people of the same age group can relate about. I think a lot of people are giving us love because we’re capturing those things.”