Yoo Jae Suk Reunites With “Infinite Challenge” Cast Members On “How Do You Play?”

On August 21, MBC’s “How Do You Play?” returned after a three-week hiatus from broadcasting.

The episode kicked off with Yoo Jae Suk entering a restaurant in Yeouido and commenting, “It’s been a long time.” Although the show was already scheduled to take a break because of the end of MSG Wannabe’s promotions and the Tokyo Olympics, Yoo Jae Suk had spent most of that time in self-quarantine after being exposed to a case of COVID-19.

Yoo Jae Suk continued, “How long has it been since MSG Wannabe ended? I’m able to greet you again with a healthy image. Thanks to everyone’s efforts, I was able to stay healthy,” referring to the efforts of the production staff in complying with infection prevention protocols.

He added, “What got me through self-quarantine was not just the support I received from many people, but also the Olympics. I’m very grateful to the athletes. While watching the Olympics, I can’t count how many times I applauded to myself. The first day I spent in self-quarantine, I could hardly believe it. I experienced a lot of emotions in self-quarantine and realized how precious it is to live freely.” 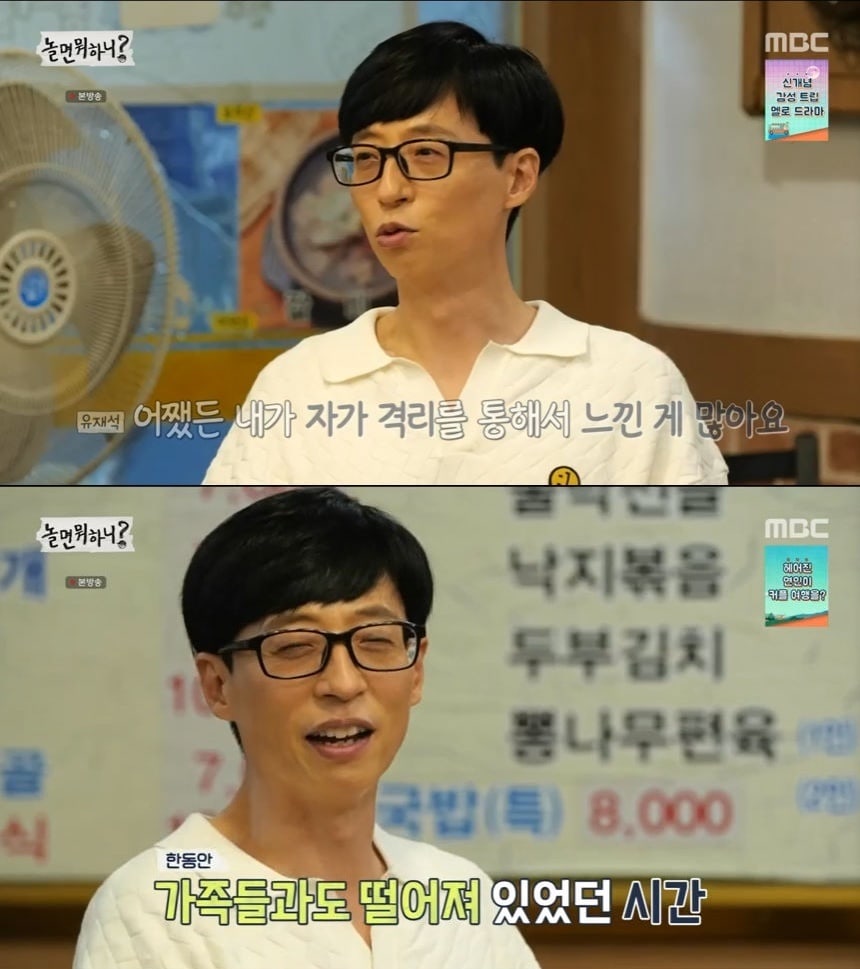 Appearing on this episode of “How Do You Play?” were Jung Joon Ha, HaHa, Kwanghee, and Jo Se Ho, who had all been regular members on MBC’s longtime variety program “Infinite Challenge.” The show premiered in May 2006 and came to an end in March 2018. Kim Tae Ho, the producing director (PD) of “How Do You Play?”, was also the PD of “Infinite Challenge.”

Yoo Jae Suk said, “I decided that ‘How Do You Play?’ also needs a ‘familyship.’ I contacted the former members of ‘Infinite Challenge.’ It was each members’ individual choice to appear. I would’ve liked to gather everyone together, but it wasn’t possible. Noh Hong Chul said that it would be hard for him to participate, and Jung Hyung Don said it would be difficult for him as well. I told them, ‘It’s fine, just comfortably do the work you’re doing now.’ Park Myung Soo said that it was difficult because of his schedule, and Yang Se Hyung is also really busy.”

Yoo Jae Suk also spoke frankly about viewers who might expect this to turn into a second edition of “Infinite Challenge.” He said, “We had a discussion today and what we want to be careful about is that there are viewers who watch ‘How Do You Play?’ because of its own appeal. People might wonder if we’re transitioning back to ‘Infinite Challenge,’ but I think it would be hard to go back to that format.”

He continued, “We have one goal: to share fun and entertainment with many people. Rather than recreating ‘Infinite Challenge,’ I want to set up a program with a flexible cast, so that any member who wants to join can join whenever. There might be times when I do something all by myself.” 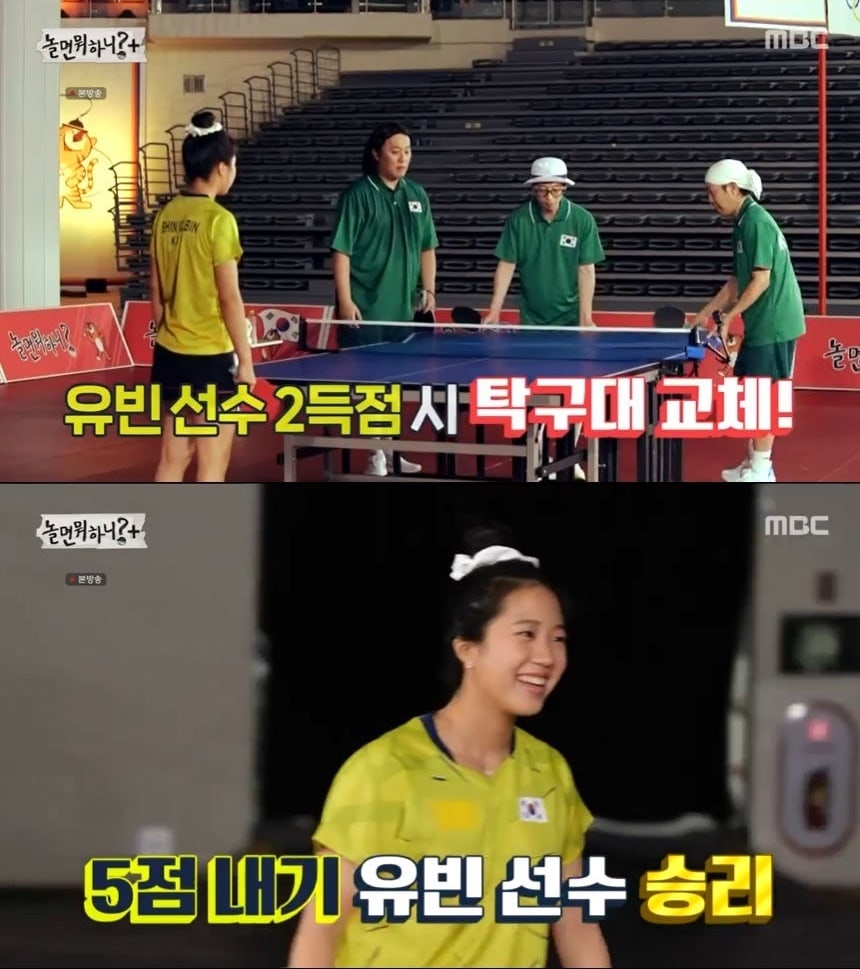 During the episode, Yoo Jae Suk, Jung Joon Ha, and HaHa recreated the vibe of the 1988 Seoul Olympics. This was to welcome a special guest, table tennis player Shin Yubin, who appeared on “Infinite Challenge” seven years ago as a child prodigy and recently appeared as a national representative at the Tokyo Olympics.

After seeing the teenage Shin Yubin, Jung Joon Ha said, “I can’t believe it. She used to be a baby.” HaHa commented, “Now that we’ve met again, I suddenly feel old.” Yoo Jae Suk said, “We’ve all grown old, but Yubin has grown up well. We think of Yubin as one of the ‘Infinite Challenge’ kids.”

Shin Yubin recalled her memories of that time and said, “I remember it clearly. I was really scared. I had a lot of fear back then since the members were dressed in weird costumes. I was frightened but tried not to show it.” She added that she had particularly been afraid of Jung Joon Ha. “Now I’m glad to see everyone again. I missed you all,” she concluded. 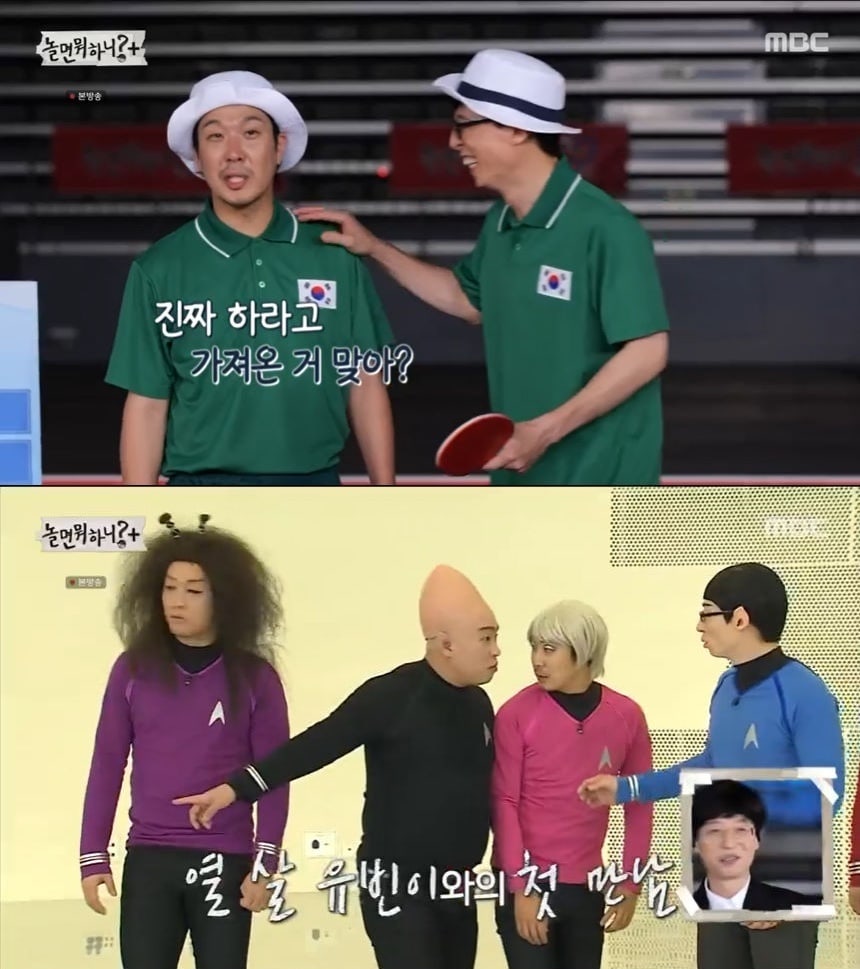 Just like on “Infinite Challenge,” the members then held a table tennis battle with Shin Yubin. The athlete also talked about her fan love of BTS‘s V, who had cheered her on at the Tokyo Olympics. She explained, “I was on my way to the dorm from a match when I saw that a photo of me had been shared on [Weverse]. When I saw V’s comment, I couldn’t believe it and my hands started shaking.” 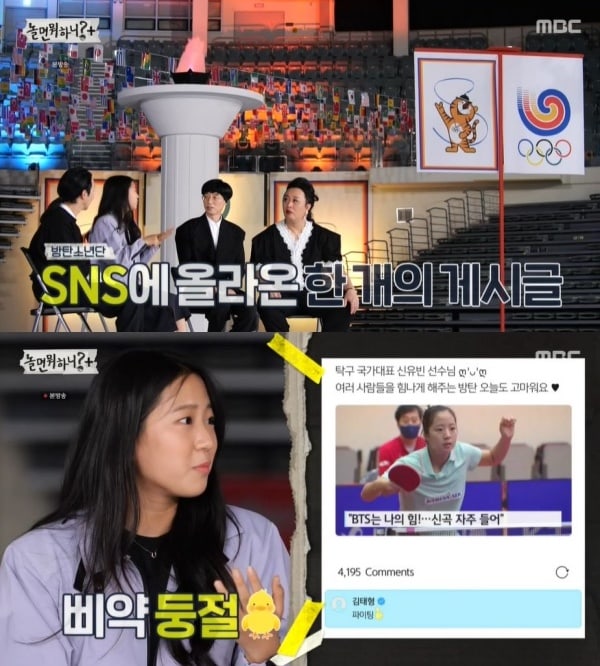