“Lovers of the Red Sky” speeds on ahead as the Maejukheon Painting Gathering gets underway and characters start to reveal their true colors.

Everyone has their own reason for being there. Hong Chun Gi (Kim Yoo Jung) fights to enter in order to get ill father the medicine he needs, which can only be obtained from the Palace. Ha Ram (Ahn Hyo Seop) is there for revenge but is torn when the girl he fell in love with 19 years ago walks into the middle of his plans. Prince Yangmyung (Gong Myung) is there to catch the imitation painter and find a divine painter who can fulfill the king’s wish of painting his portrait and sealing Ma Wang back into it. And Prince Juhyang (Kwak Si Yang) is there to sway Yangmyung to his side. That’s a pretty full chessboard, and the pieces are about to start moving!

Here are the moments that stole our heart this week!

1. Chun Gi standing up to Yangmyung 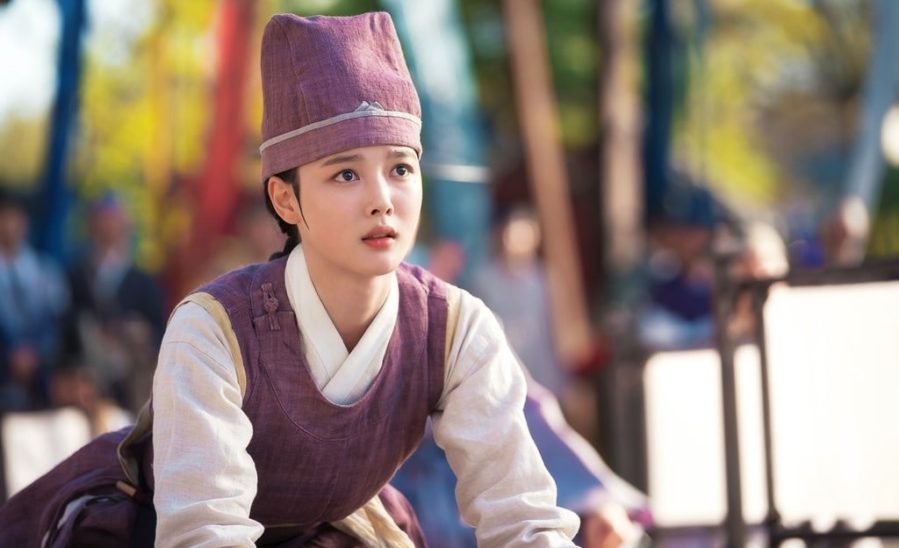 The Maejukheon Painting Gathering introduces us to a host of lively characters like Monk Man Yu (Shin Jae Hwan) and Shim Dae Yu (Jang Won Hyung) blessed by Hwacha (a goblin who lives off the energy in paintings and the green-eyed man who visited Chun Gi when she was locked in the barn). Interestingly, this is the same hwacha that possessed the man who helped Chun Gi’s father back when he was painting the king’s portrait.

We know that Chun Gi is skilled, but the question arises as to whether a girl who paints (brilliantly) for money can hold her own among specialists who paint for the sake of art. It’s the age-old battle between commercial artists and so-called real artists, which is why it’s all the more gratifying when Chun Gi’s painting during the first round is given favorable reviews. That is, until Chun Gi’s signature butterfly gives her away to Prince Yangmyung who immediately nitpicks about everything he can find in order to fail her. 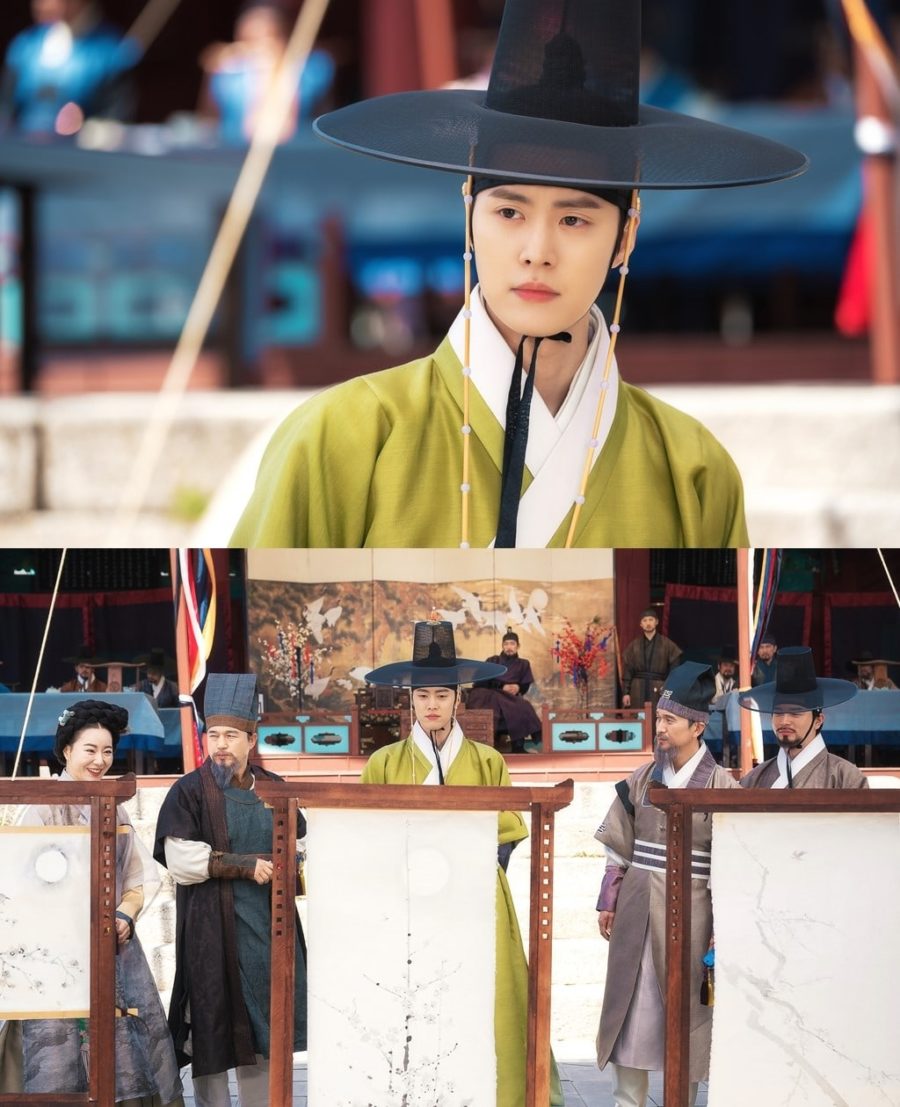 He does come off a little snobby and distanced from reality by essentially penalizing Chun Gi for her paintings being so good that they fooled the head of the Painting Institute, Ahn Gyeon (Jang Hyun Sung), especially because she’s only painting to make a living.

So, it’s satisfying when she not only stands up to him but eloquently expresses her intentions for doing so in a manner that doesn’t come across as brash or unrealistic. Fittingly, it isn’t Yangmyung who changes his mind over the course of a brief conversation with Chun Gi but Ahn Gyeon who uses his all-pass tile and judges Chun Gi for the merit of her work.

Thus far, Ha Ram’s been doing all the realizing and pining after figuring out that Chun Gi is the girl he met 19 years ago. But Chun Gi didn’t forget him either. This week, with Ha Ram’s prompt during the second round, she finally puts two and two together over the course of the second round of the Painting Gathering and realizes that the gentleman scholar who keeps protecting her is very likely Ha Ram.

It’s no surprise that she channels that realization into her painting and visibly moves Yangmyung with her work. Sincerity does move the heavens after all! And a running theme thus far in the competition is that if there’s anything that sets Chun Gi’s talent as a cut above the rest, it’s her sincerity and the emotions she expresses in her work.

However, the depth of Ha Ram’s and Chun Gi’s feelings for each other is certainly surprising for a pair that met for only one day 19 years ago. They even remember the exact conversation they had back then, which is certainly unusual. Perhaps Ma Wang can be blamed for that one. But Ha Ram has a contender for Chun Gi’s feelings because Prince Yangmyung is stepping up his game.

Yangmyung certainly made a right buffoon of himself during the initial quartet of episodes, but he’s becoming more and more likable. The first night of the competition, his conversation with Chun Gi reveals not a deeply-held snobbery but a genuine concern for Chun Gi’s future as a painter. If he noticed Chun Gi’s trademark, then there’s no doubt others could. Her past as a painter of brilliant forgeries could nip her budding career in the bud. It’s a valid concern to have. 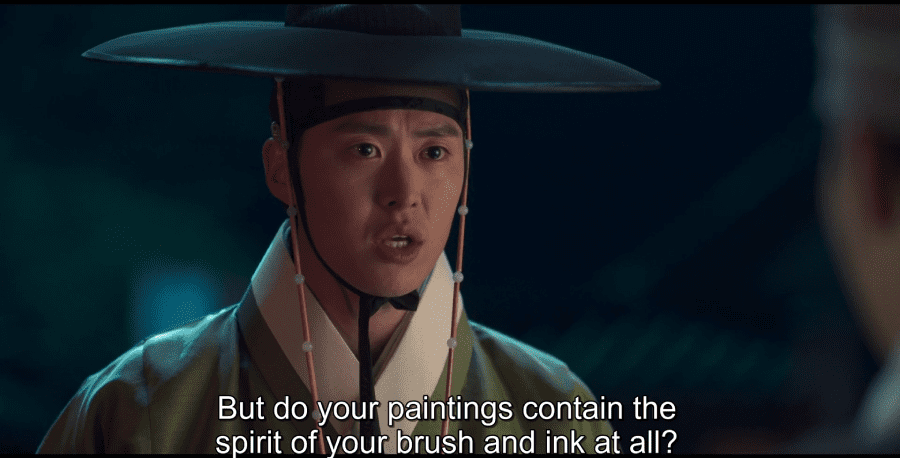 Yangmyung also noticed that Chun Gi’s working during the first two rounds, while worth of passing, lacked their own color. She paints with sincerity but in the spirit of mimicry. For her first painting, she imitates the peach blossoms she saw that night 19 years ago with Haram, and for her second, she replicates the landscape she saw upon first being able to see. They’re beautiful, but at the end of the day, they’re replicas and imitations. Yangmyung asks her to depict her own interpretations without hesitation in herself, and that’s always a great message, even if it does depress Chun Gi to hear it at first.

If Juhyang doesn’t go completely psychotic, he could actually be a compelling villain. He seems to genuinely care for his young brother and doesn’t storm in demanding that Yangmyung come to his side or else. For his part, Yangmyung shows a surprising backbone of steel, not losing his temper with his brother but gently informing him that he won’t be taking part in any plot to dethrone their oldest brother, the current Crown Prince. 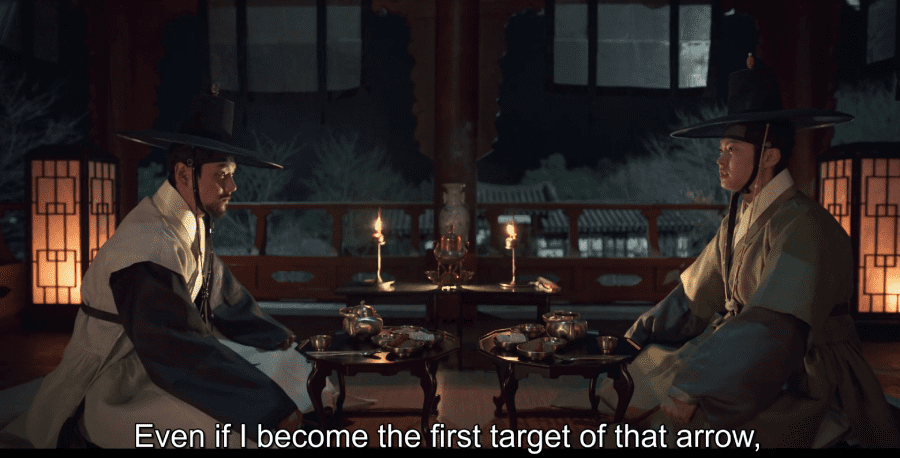 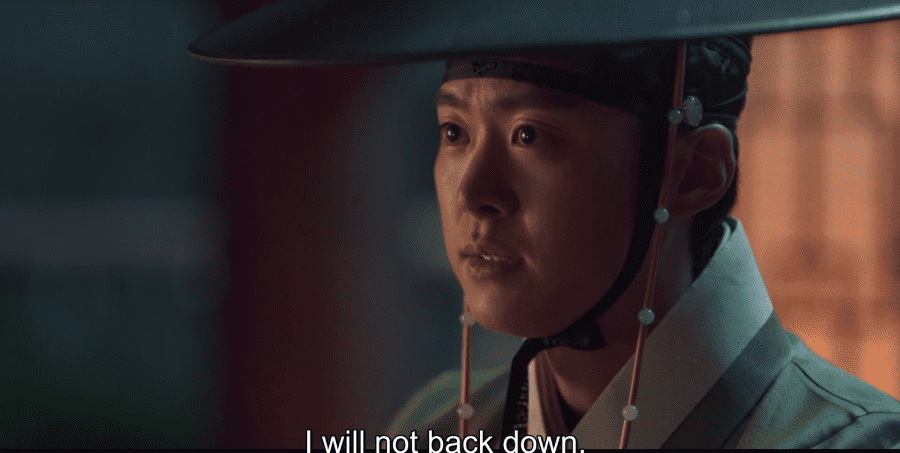 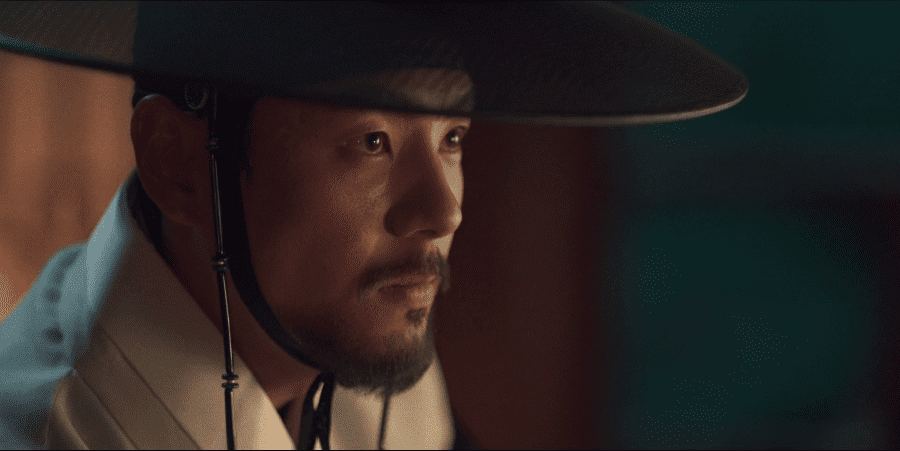 Juhyang’s questions to Yangmyung indicate the sort of villain he might become. He asks Yangmyung if their grandfather, who led his own coup against the throne, was a traitor. Yangmyung is left flummoxed but insists that he wasn’t. Then, by the same logic, can Juhyang really be a traitor himself? Even Ha Ram has noted that the Crown Prince is unfit for the throne, and it’s simply that the King Seonjo (Jo Seong Ha) is desperate to rid himself of it. It’s an interesting quandary that’s bound to get even more complicated once Ma Wang and Samshin (Moon Sook) get involved.

For some reason, it feels early for a kiss, because while Chun Gi and Ha Ram are both smitten, they’re also quite hesitant around each other. But that appears to be the point. Ha Ram cannot afford to be swayed at this point as he starts putting his plan in action, but he needs to take that initial step in order to back away and for the tension to begin.

The rules surrounding the butterfly seal on his neck are still unclear. Is it that it vanishes every time they touch? If so, the last time it vanished, Ha Ram transformed straight into Ma Wang, but why didn’t the same thing happen after he kissed Chun Gi? Is there a memory we might be missing between Ha Ram falling unconscious and waking up unscathed? Is Chun Gi Ma Wang’s trigger? Or does she keep him at bay?

For her part, Chun Gi is still the heroine of a romance, not knowing yet that it’s a fantasy romance set against political upheaval and a revenge plot as Ha Ram attempts to make those who killed his father pay. So she’s naturally confused when the man who kissed her distances himself almost immediately afterwards and curious on what happened to him such that he didn’t make their meeting 19 years ago.

Chun Gi really came into her own this week, so here’s hoping she enters the main narrative (the darker narrative) more. As wonderful it is to see her succeed, it appears it’s time for her to join Ha Ram’s world and see that the higher she rises, the greater the stakes are. And with Prince Juhyang’s sword at her father’s throat, perhaps that time is next week!