“Lovers of the Red Sky” hits a bit of a standstill this week as our young lovers are separated. Fantasy takes a backseat to political machinations as King Seongjo (Jo Sung Ha), Prince Juhyang (Kwak Si Yang), and Prince Yangmyung (Gong Myung) battle it out for the throne, the demon, and for Hong Chun Gi (Kim Yoo Jung).

With the plot moving quite slowly, the show finally answers a couple crucial questions but leaves a few major points unaddressed. Here what we liked and what we found confusing about this week’s episodes! 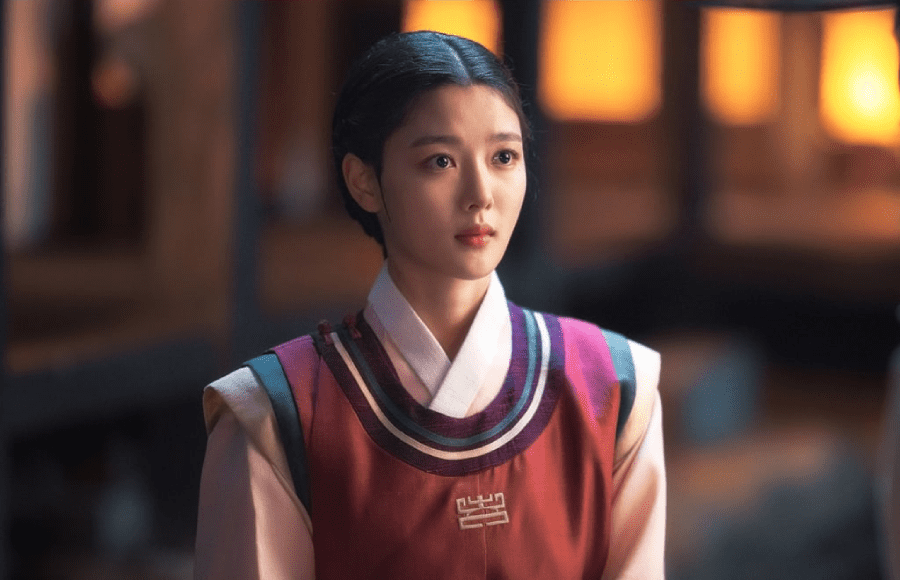 For the longest time, Chun Gi believed that it was the painting a divine portrait of the former king that caused her father Hong Eun Oh (Choi Kwang Il) to go mad, but when she overhears a conversation between Choi Won Ho (Kim Kwang Gyu) and Ah Gyeon (Jang Hyun Sung), the truth comes out.

The deity Hwacha, better known as the green-eyed man hovering around Chun Gi, is a goblin who lives off the energy in painters. If such a painter strikes his fancy, or if a divine painter attempts a divine portrait, he approaches the painter to propose a deal. The painter will produce his finest work but be doomed to die or go mad thereafter. As Won Ho puts it, Hwacha is someone a painter dreams of and dreads meeting. To deny him is to reject reaching the pinnacle of a painter’s career, but to accept him is to accept the end of their career. 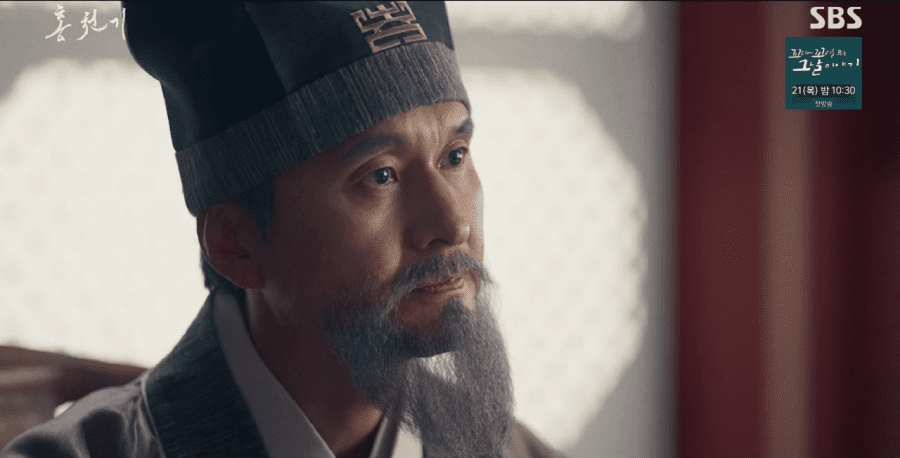 For his part, Ahn Gyeon knew of what could befall Chun Gi but refused to inform her of the risks. Having been jealous of Eun Oh, he only sees Chun Gi as a means to an end, a way to seal the demon once and for all (until someone else like Juhyang lets it out that is).

Chun Gi is suitably horrified at the decision before her but immediately chooses to sacrifice her life or her sanity, whatever it may be, if it means saving Ha Ram (a very noble decision but really quite strange as she barely knows him). But if Hwacha is who made Eun Oh go mad, then where does Kan Yoo Guk (Park Jung Hak), Eun Oh’s helper during the original portrait drawing, come into play? Plus Hwacha also made a deal with Shim Dae Yu (Jang Won Hyung a.k.a. Shim with a hat during the Makjuheon) who seemed quite sane, so just who is responsible for all this insanity? It’s all quite confusing. 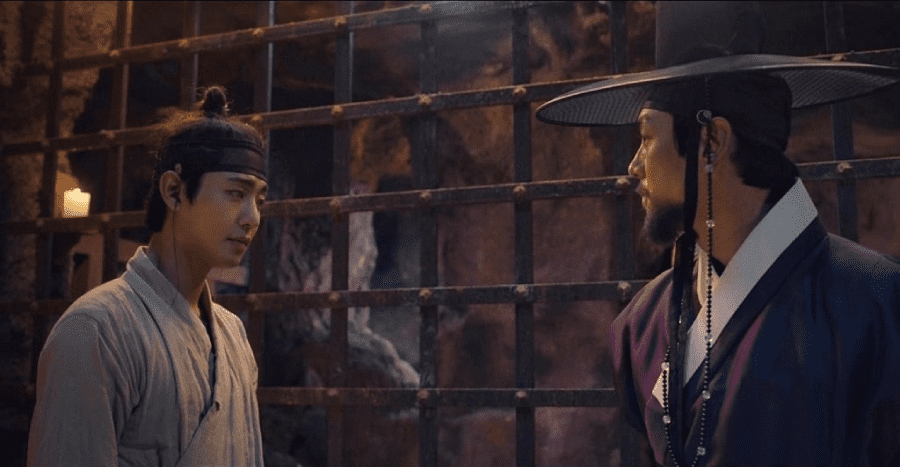 Ha Ram’s revenge remains as mysterious as ever. It’s clear that he wants the downfall of the royal family, but the way he’s going about it absolutely boggles the mind. First, after Yangmyung arrests him, he appears to be calm, understanding as to why Yangmyung did so. After all, it’s no contest that he posed danger to Chun Gi. 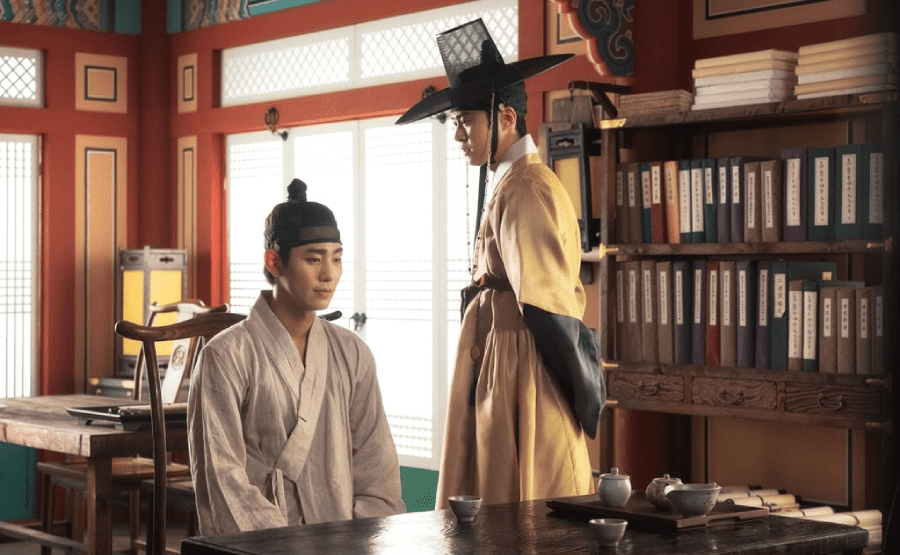 Yet, he immediately turns around to send a message to Juhyang that puts Yangmyung in the line of fire. There’s no way Ha Ram didn’t know that King Seongjo would place Yangmyung as the next in line for the throne. For all his naivete, Yangmyung has always been levelheaded, whereas Juhyang is nothing but power-hungry on the best of days. Ha Ram knows that he’s pitting brother against brother, his friend against a man who promises to be a tyrant, but he doesn’t seem to care. 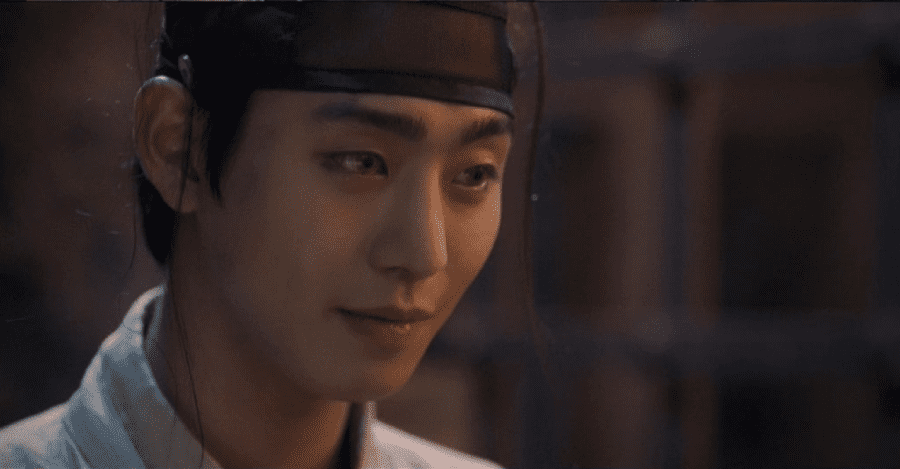 Worse, Ha Ram genuinely seems to intend to give Ma Wang to Juhyang without any regard for the consequences it could have for people of the nation. He’s more concerned about taking out as many people as he can within the royal family. Those are difficult actions to root for. There’s Yangmyung’s side, Juhyang’s side, and Ha Ram’s side, and the latter is the most confusing of all, because what does Ha Ram want? To sow discord? To get rid of the demon? Both?

And what are his plans afterwards? To run away with Chun Gi and play house while the world collapses around them with Juhyang in control of Ma Wang? It feels like there were two Ha Rams in prison. One feeling defeated, reciting sad poems and hitting walls, and the other scheming away. The political side and fantasy side of this drama really don’t mesh well. 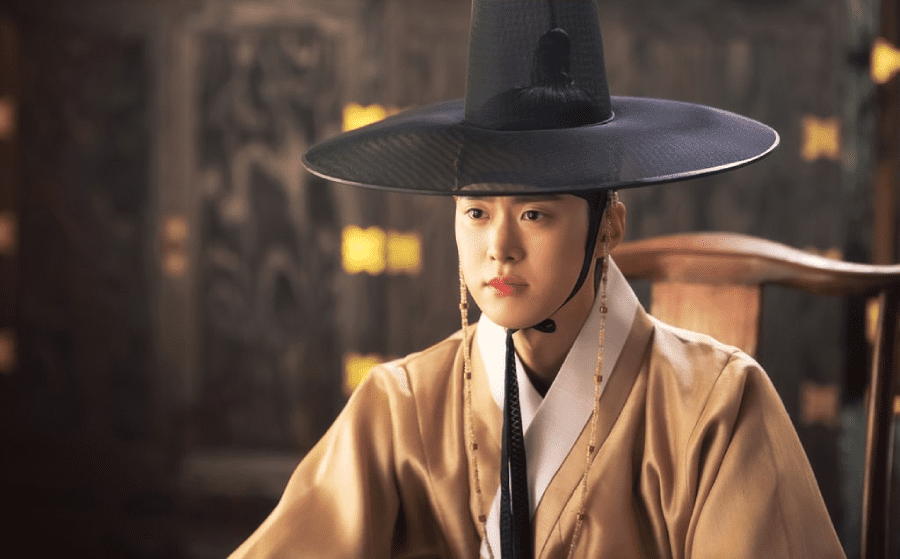 In contrast to Ha Ram’s strange characterization, Yangmyung is completely transparent. Where Ha Ram hides everything from Chun Gi (who still doesn’t know the man she keeps crying over is inciting political violence in private), Yangmyung’s motivations are clear. He cares for Ha Ram and plays fair in love and war. Arresting Ha Ram had nothing to do with his feelings and everything to do with Chun Gi’s and everyone else’s safety. Ha Ram clearly has no control over Ma Wang and killed those poor guards carrying his palanquin, so it makes sense to keep him in a high security prison until the sealing.

Yangmyung doesn’t want the throne, making him the perfect fit for it. He doesn’t want to be in conflict with his brother, doesn’t want to hurt Ha Ram, and doesn’t want Chun Gi to be placed in harm’s way, but he knows what he has to do and does it without complaint. He may not be a particularly stellar love interest, but Yangmyung’s probably the most reasonable character in the entire show.

4. Unanswered: What are Mooyoung and Maehyang’s stakes in this battle? 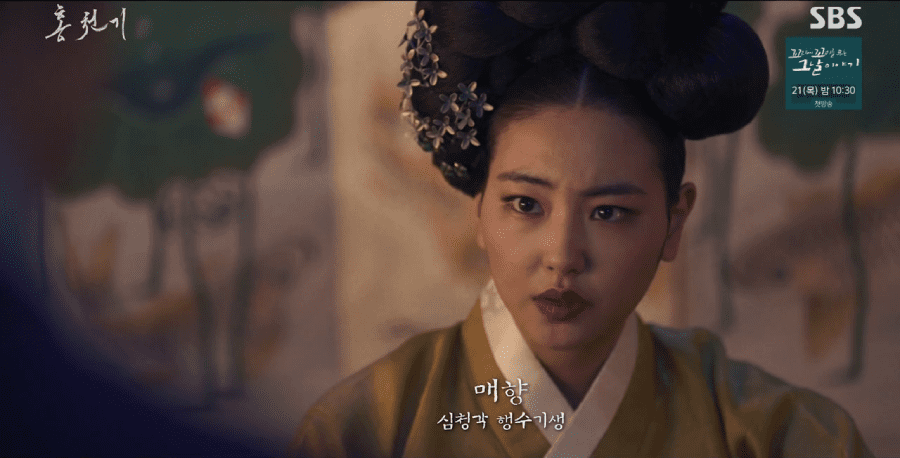 When Maehyang (Ha Yul Ri) first burst onto the scene in her face-off with Juhyang, it seemed that she was the second female lead. Alas, she’s been relegated to the periphery ever since. We know Ha Ram trusts her enough to keep her within his circle, but we haven’t been told anything else. The same goes for Mooyoung (Song Won Seok), Ha Ram’s stalwart helper. 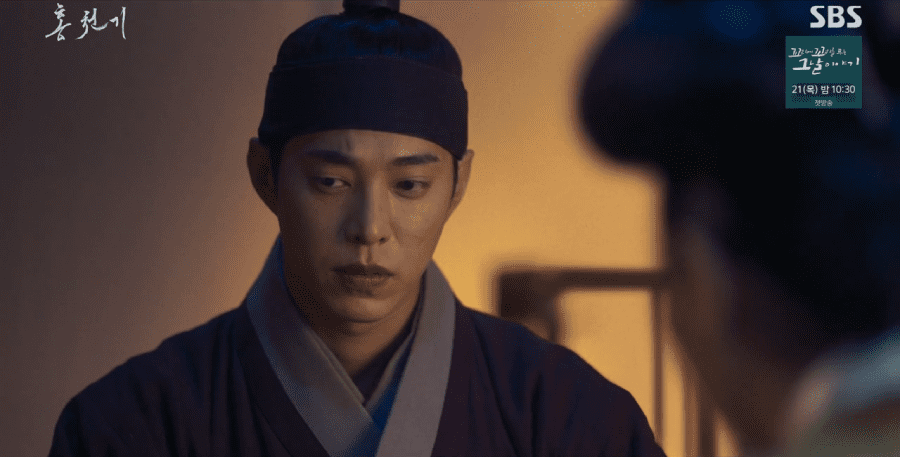 Why do they help Ha Ram? Why are they invested in his revenge? What did the royal family do to them? How did they even meet Ha Ram enough to form this little spy network? A sageuk, and especially a story like this, usually has a couple of deaths at the end, meaning it’s likely one of them will die. But it’s that much harder to get invested in their death if we don’t know anything of their life. If only this drama would flesh out their backstories, they seem far more compelling than montage after montage of Chun Gi begging on her knees for Ha Ram’s life.

5. Answered: What relevance does the ring have? 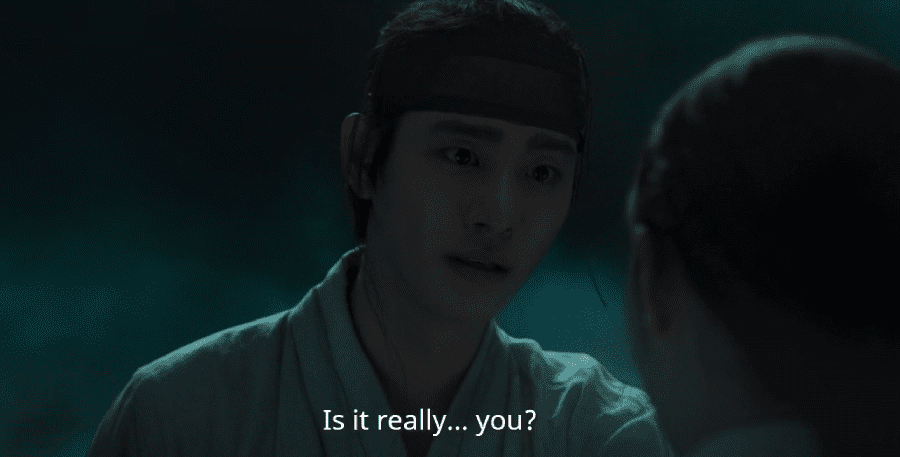 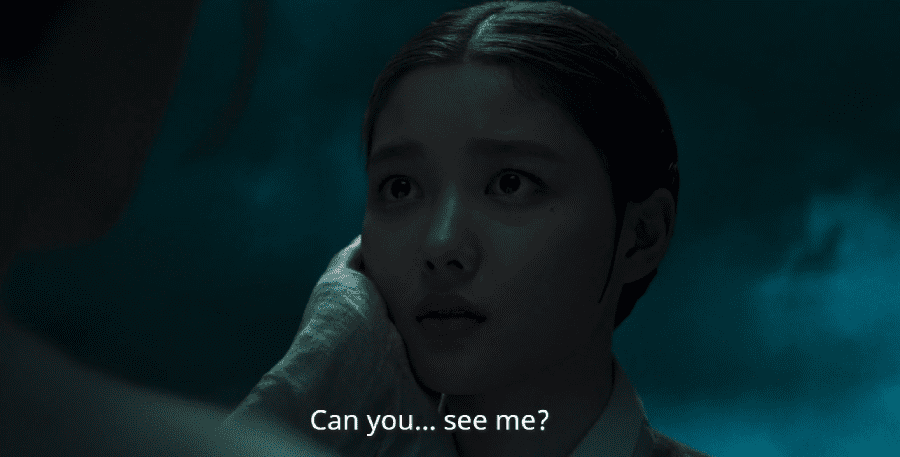 The mysterious prisoner (Choi Jong Won) in the cell opposite Ha Ram’s is more than he seems. He knew the ring that Ha Ram gifted Chun Gi was made with the remnants of the balance god eaten by Ma Wang. More than that, it had the power to bring both Chun Gi and Ha Ram into the landscape of his mind so to speak, where Ha Ram was able to see her for the first time and see the entity within him. The prisoner notes that it’ll prevent Ha Ram from slipping into unconsciousness, meaning he’ll be able to stay sane even if possessed by Ma Wang. That’ll likely come in useful the next time the demon comes calling for his eyes.

Next week shows everything hitting all at once. Ha Ram plots to unleash Ma Wang at the sealing ritual, Yangmyung is informed that he must kill Ha Ram to get rid of Ma Wang, Ha Ram starts getting Ma Wang’s memories. All of this is great, but Chun Gi remains so horribly neglected that it begs the question as to why the Korean title of this drama is Hong Chun Gi at all.

Her role these past two episodes has been to cry over Ha Ram, make frankly enormous decisions involving her life and sanity for his sake when she barely knows him, and cry and beg him some more. At this rate, the greatest question in this show isn’t how Ha Ram and Chun Gi will survive but if Chun Gi will get a character arc.