“Lovers of the Red Sky” has been a strange ride, captivating at times, and just plain bewildering at others. The final pair of episodes crams a bit of both. We return to some of what made the beginning of this show so dreamy and enchanting while continuing onwards with plot holes aplenty. Alas, Ma Wang and Prince Juhyang’s (Kwak Si Yang) romance comes to an end as it’s time for the demon to be sealed in a second Sealing Ceremony. The gods, the royals, the people, and our main characters have been waiting for this moment for 16 episodes.

Here’s what we found interesting about how it was executed!

1. The revenge that never was

Ha Ram (Ahn Hyo Seop) has spent his entire life believing that King Seongjo (Jo Seong Ha) was responsible for the exile and murder of his father. Thus, it comes as a great shock when the kindly king appears, temporarily recovered from his illness, to unveil the unvarnished truth. It was Ma Wang who actually killed his father. There was a minuscule hint of sorts that this could be the case when, last week, Ha Ram saw some of the demon’s memories, but he didn’t think about them too hard, and who would? Ma Wang hasn’t proven himself the most reliable person around.

Turns out that the king knew of Ha Ram’s double life as Ilwolseong, as well as his plans for revenge, but did nothing, because he believed that his family was the root of all this misfortune. It was technically Juhyang, but this is a classic case of the father bearing the sins of both his wayward son and of his cruel father. Poor King Seongjo. 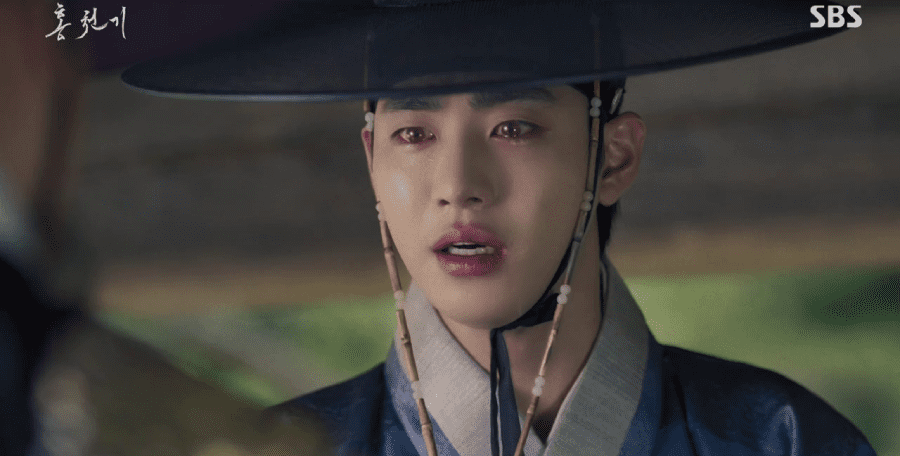 Ha Ram is understandably devastated by the reveal and gives up on revenge, especially when the king and Prince Yangmyung (Gong Myung) arrive just in time to prevent Juhyang from imprisoning Chun Gi (Kim Yoo Jung) and beheading her painter friends. The only person quite displeased with this turn of events is Mae Hyang (Ha Yul Ri), who realizes that Ha Ram truly has turned his back on their plans. This infuriates her for reasons we will likely never know. 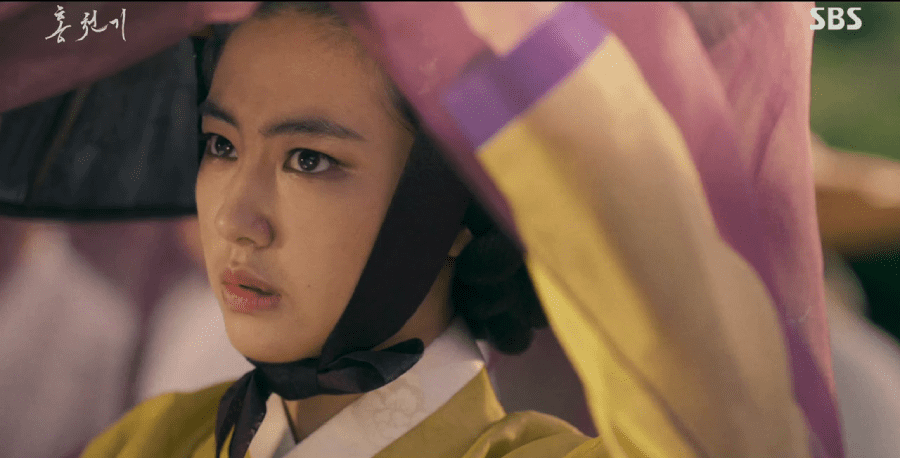 Juhyang is clapped in prison immediately, despite wailing to his dad that only Ma Wang can cure his disease. Mae Hyang visits him to vow her loyalty to his cause, going as far as to slice her hand to prove it. Juhyang thinks to himself that this is a woman with a story, but, alas, we were never given that story. What a shame and a waste of a possibly great character. This entire arc seems to be about redeeming the royal family via the sad figure of the king, but it appears there was more wrong done to people like Mae Hyang, and we will never know what that was. 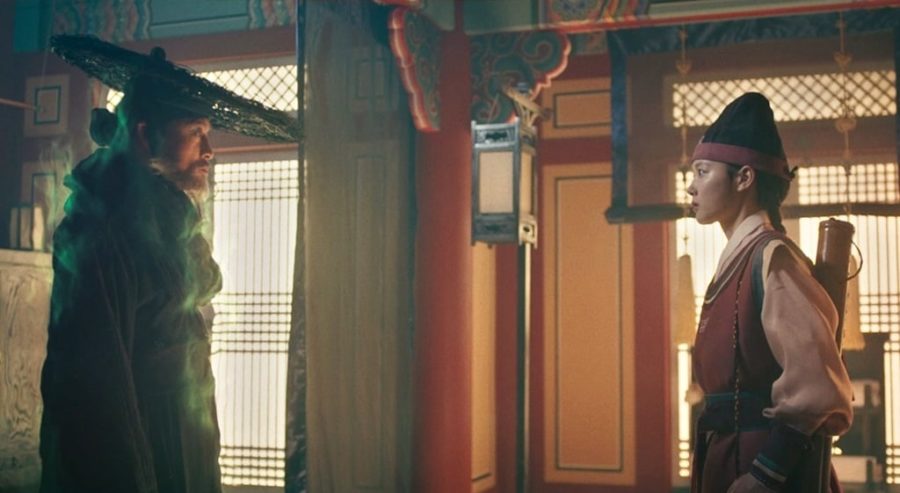 The dangers of jumping to conclusions are made clearer than ever when Hwacha (Park Jung Hak) appears before Chun Gi to inform her that she’s going to have to make a deal with him if she wishes to make a divine painting. That’s the reason her previous painting tore at the Sealing Ceremony. It was a divine painting but didn’t have the power to contain Ma Wang that only Hwacha can provide.

Chun Gi knows she doesn’t really have a choice but questions him, pointing out that all who make a deal with him go insane. However, Hwacha informs her that this actually isn’t true. All he requires in return is a painting. So in other words, poor Hwacha has been maligned this whole time! The poor guy just likes to absorb energy from paintings, because if he does so enough, he’ll finally be able to become a powerful spirit on the level of Samshin (Moon Sook) and Ho Ryeong (Jo Ye Rin). Everyone just jumped to conclusions. Hwacha deserves an apology.

3. The Sealing Ceremony round 2 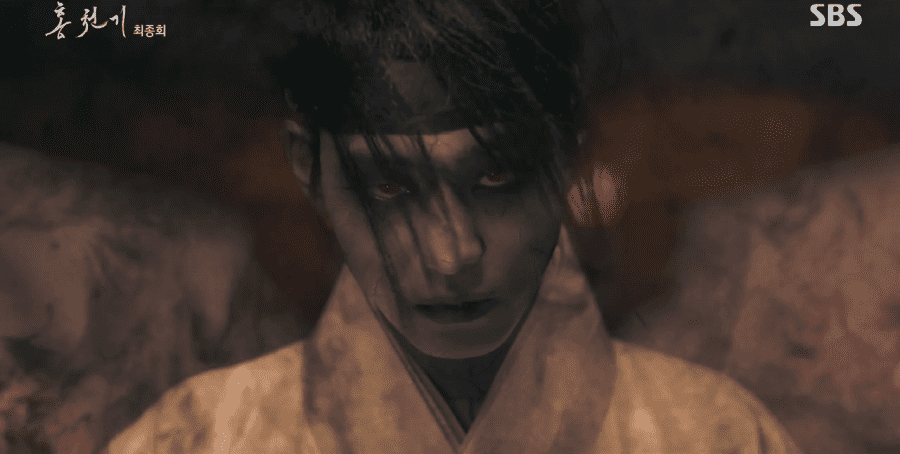 The divine painting must be started and completed on the same day as when the sealing is to take place. Chun Gi, not being superhuman, will undoubtedly need help, which is where Shim Dae Yu (Jang Won Hyung)(formerly a possessed spy for Juhyang, the runner up at the Makjuheon Painting Contest) comes in. Turns out that his father is Kan Yoo Guk (Park Jung Hak), who assisted Chun Gi’s father with the preparation and completion of the initial divine painting all those years ago. Shim Dae Yu and Chun Gi’s friend Choi Jung (Hong Kyung) work as a trio to finish the painting.

Mi So (Chae Gook Hee), Juhyang’s former shaman, suddenly feels remorse and decides to turn over a new leaf. This is most convenient as Prince Yangmyung’s shaman has lost her power. Ma Wang arrives right on time to his own Sealing Ceremony because he wants his eyes back, and Mi So immediately tries to contain him to the best of her power. He easily bests her and advances to the painting room and takes his eyes back. 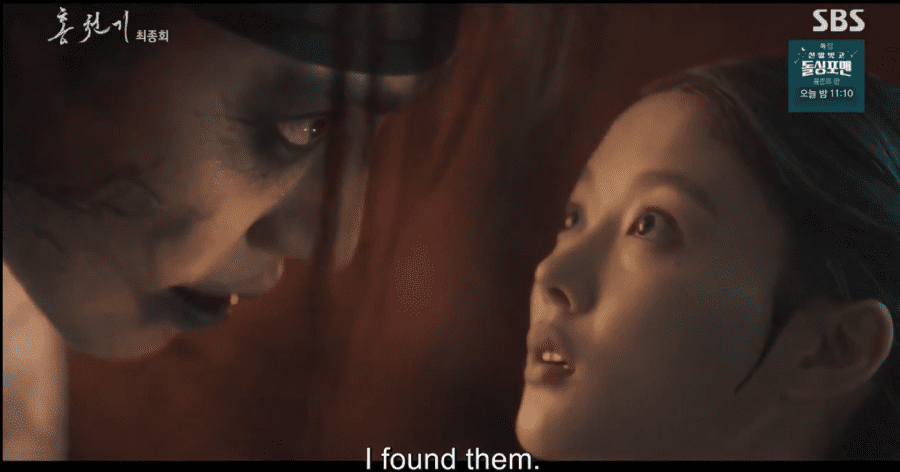 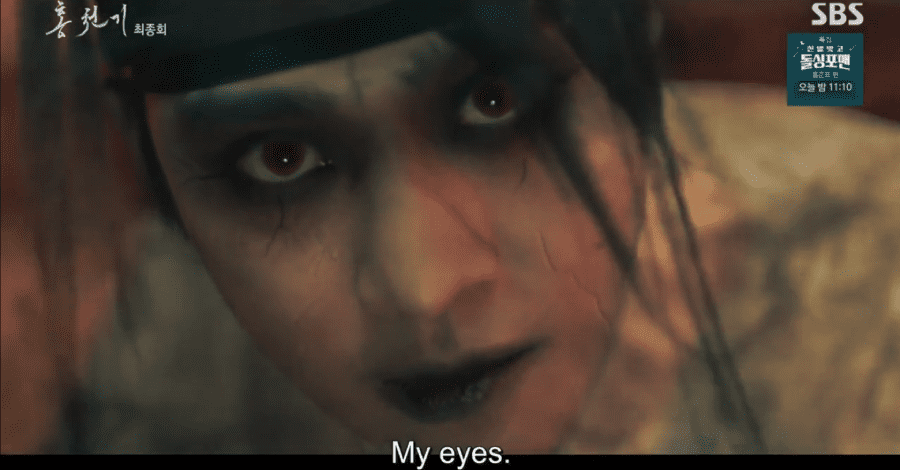 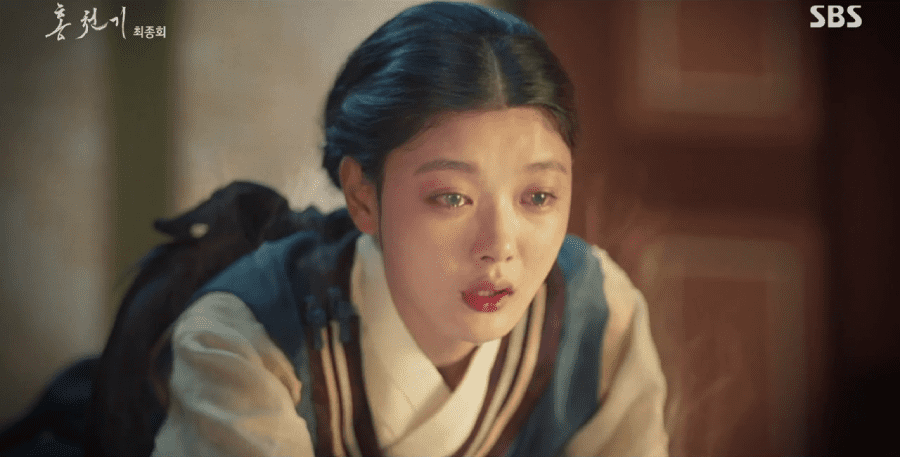 Chun Gi is left blind and with only the eyes left to finish in the painting (oh the irony!). Yangmyung is aghast. Hwacha appears, scaring the life out of Choi Jung, but even he doesn’t know how to solve this. Still, help is on the way. 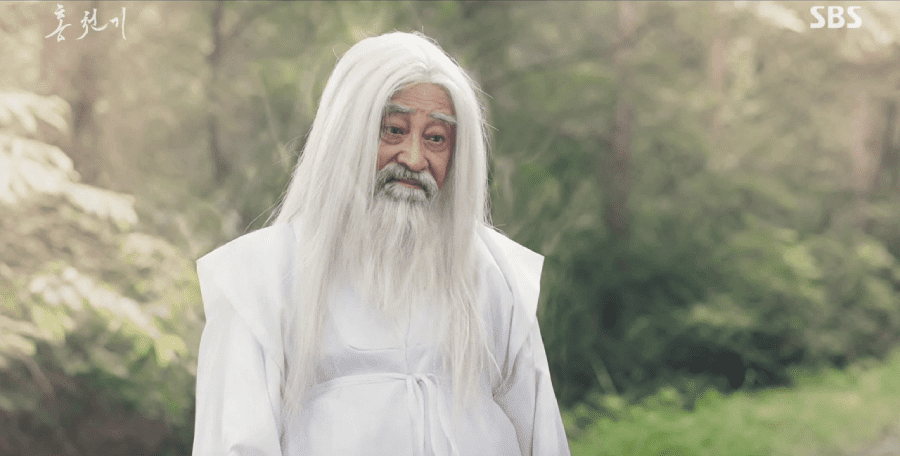 Ghosts weren’t introduced as part of the lore of this drama, but apparently they exist. Because the whitehaired man in the cell opposite Ha Ram when he was imprisoned (Choi Jong Won), is actually his…grandfather? Let’s just go with it. His grandfather helps him properly submit to the Sealing Ceremony, and all of this apparently has to do with the fact that Ha Ram’s family is born with the divine energy of water (which in the early episodes was proof that their family could find water, not become water spirits, but who knows?). If only Ha Ram’s father had seen fit to make a similar appearance in ghost form, Ha Ram wouldn’t have wasted the past 19 years planning revenge. 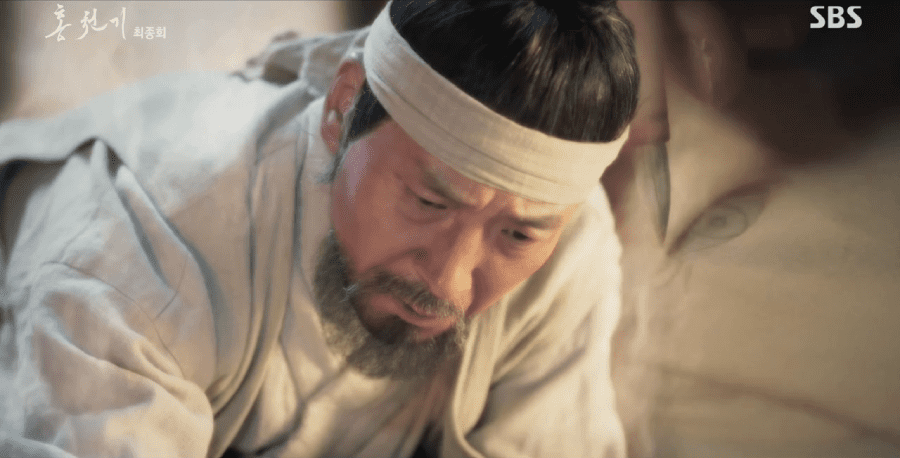 Returning to the Sealing Ceremony, Chun Gi meets a ghost of her own: her father, who finishes the painting through her. Chun Gi puts the finishing touches on the eyes herself and bids farewell to her father. And it’s done. Samshin sacrifices herself to seal Ma Wang, and a blind Chun Gi embraces Ha Ram who can now see. Everyone is happy save Mi So (who’s dead) and Juhyang, who just lost the person, or demon rather, whom he yearned after for 19 years. 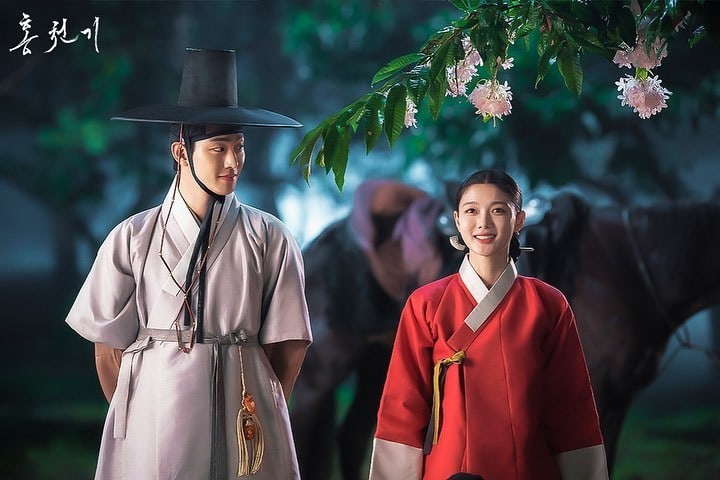 With the demon’s curse lifted, Chun Gi gets her vision back in 10 seconds flat and is spirited away by Ha Ram to the middle of nowhere, where they raise a family. It’s super cute, but it is a little strange. What happened to her dreams as a painter? It appears that she just lives isolated from her friends and everyone else now, which is most bewildering. Ha Ram seems to be similarly unemployed, but they look happy.

Hwacha joins Ha Ram’s grandfather in cosplaying as Gandalf and looks pretty happy about it. Prince Yangmyung nears the end of his bildungsroman, having gone from well-meaning but pompous boy to a sober-eyed man. He visits Chun Gi and Ha Ram on their birthdays (which fall on the same day) to present them with an elevation of their status to high-ranking noble. Everyone from the Baekyu Painter’s Society arrives for a birthday party, but Yangmyung ends up having to leave early. Trouble is afoot, and its name is Juhyang.

Juhyang’s been in prison for five years now, but for a man at death’s door, he looks pretty good. He breaks out of prison and assumedly kills his father because he’s wearing the king’s robe. Yangmyung meets him in the middle of a palace courtyard, and they give grand speeches on being enemies and the throne. And there’s a battle. And the drama ends. 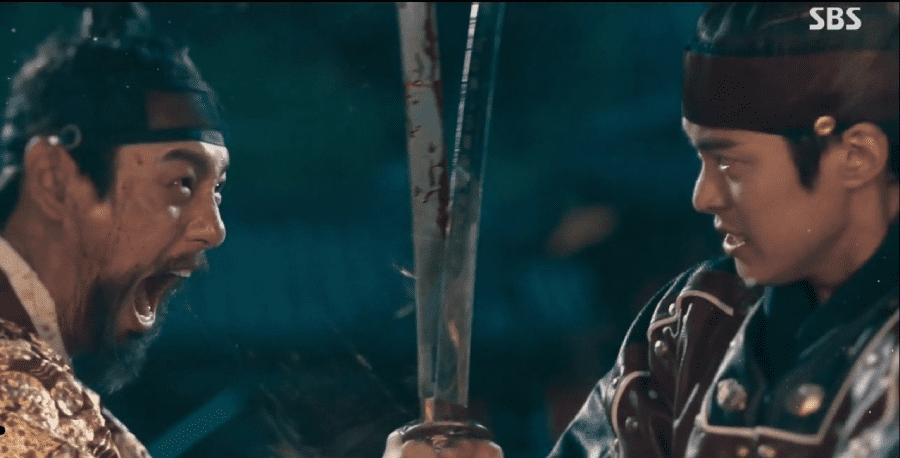 This has all been quite strange, but there were a few things that “Lovers of the Red Sky” did well. The cinematography was always lovely, color schemes and all. The leads did their best with what was given, which honestly doesn’t appear to have been much because the name of this drama truly should be Ma Wang, not Hong Chun Gi (as it is in Korean). This drama was quite progressive in having a blind male lead as a romantic interest and hopefully opens the doors to more such depictions. Mental illness is a common feature in dramas, but physical disability isn’t as common. It was great to have more representation on-screen. And the ending (minus the battle) was actually very, very cute and brought everything full circle. So three cheers for our young lovers and their happy ending! Now if only Yangmyung could have one! 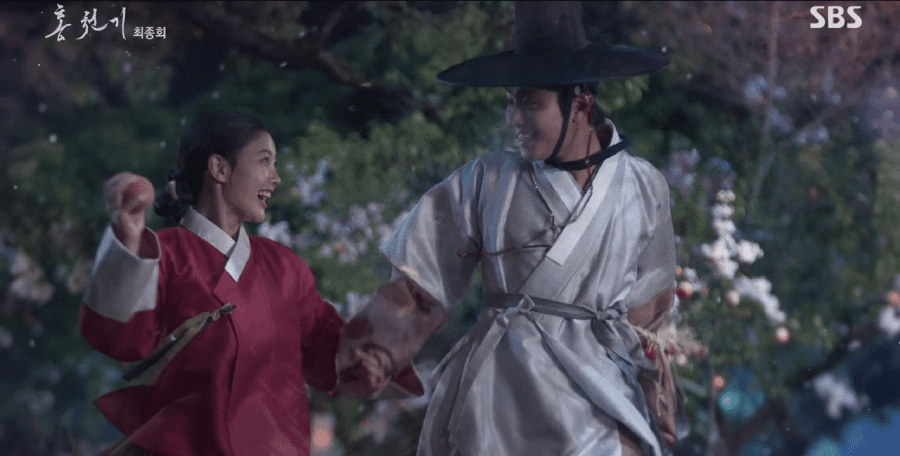