SBS’s new drama “Lovers of the Red Sky” has had a great start to its run, with the latest episode reaching average nationwide ratings of 8.8 percent.

The historical fantasy drama stars Kim Yoo Jung as painter Hong Chun Gi, who was born blind but miraculously regains her sight, and Ahn Hyo Seop as blind astrologer Ha Ram, who is able to read the stars despite losing his sight.

In the recent episode, the story transitioned from the past to the present and will continue to follow Hong Chun Gi and Ha Ram’s journeys. The two actors shared what viewers can look forward to as the plot thickens. 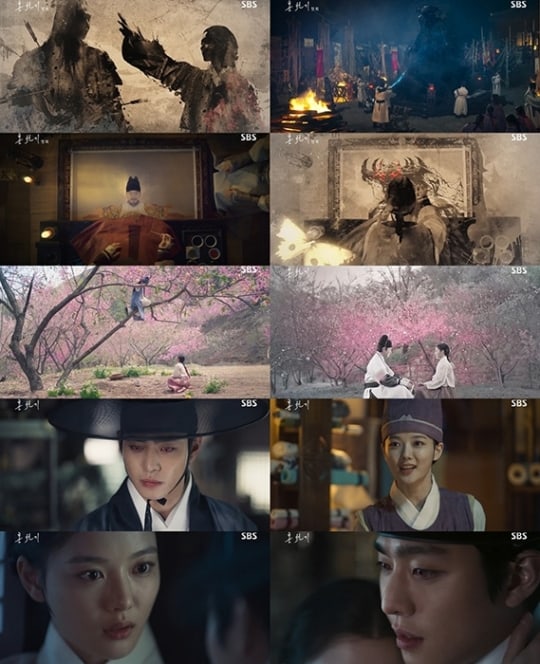 “Lovers of the Red Sky” is set in a fictional time period where ghosts, devils, and spirits meddled in the world of humans. In this unique setting, there exists a ritual where the spirit of the god of death is transfixed inside a portrait. A curse binds the children cursed by the god of death together. In this case, Hong Chun Gi, the daughter of the artist that painted the portrait, is bound to Ha Ram, the son of the priest that held the ritual. Ha Ram was born with the god of death bound to him and as a result lost his sight and has red eyes. Hong Chun Gi gains her sight through the mystical connection she has with Ha Ram. Their romance begins as they try to figure out what this connection exactly entails.

“Lovers of the Red Sky” embodies the genres of fantasy, romance, and historical. Each scene is carefully orchestrated to bring out the best of all these factors, such as the beautiful and dreamy scene where Hong Chun Gi and Ha Ram make memories playing among peach blossoms. Another meticulously crafted scene introduces Hong Chun Gi as a genius artist. The imaginative appearance of the god of death adds suspense to the story while the depiction of life inside the palace keeps viewers on the edge of their seats.

The music of the drama helps viewers fall deeper into the world of Hong Chun Gi and Ha Ram. One such song is Baekhyun’s OST “Is it me?” “Lovers of the Red Sky” director Jang Tae Yoo is an established figure in the scene and his collaboration with music director Jeon Chang Yeob is expected to bring about more synergy.

Kim Yoo Jung’s previous historical dramas “The Moon Embracing the Sun” and “Love in the Moonlight” performed well and her interpretation of Hong Chun Gi’s character as a bold and genius artist is set to continue the pattern. Ahn Hyo Seop has put forth a performance of Ha Ram so believable that it’s hard to believe he is the same actor from “Dr. Romantic 2.” Even within “Lovers of the Red Sky,” he switches flawlessly between red-eyed Ha Ram, revenge-driven Il Wol Sung, and the dark god of death. The two actors’ chemistry captivated viewers in episodes thus far and it is expected to continue through the plot.

Ahn Hyo Seop and Kim Yoo Jung pointed out that the drama is most appealing because it gives the viewer an experience of watching a fairytale. Ahn Hyo Seop added, “From fated love to factors of fantasy and tension surrounding the throne, there are lots to see. Please look forward to the fairytale that’ll come to you this fall.”

Kim Yoo Jung commented, “I suggest that when you watch ‘Lovers of the Red Sky,’ you watch it as if you’re immersed in reading a fun fairytale. There are also many artistic scenes with Hong Chun Gi and Ha Ram, so I hope you will check them out through the broadcast.”

“Lovers of the Red Sky” airs Mondays and Tuesdays at 10 p.m. KST.

Catch up on “Lovers of the Red Sky” here: