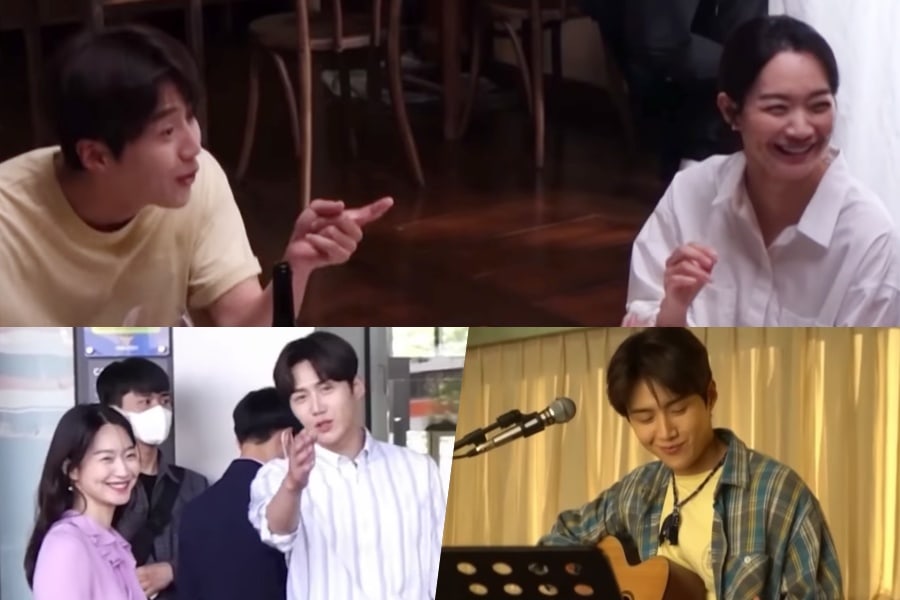 Watch: Shin Min Ah And Kim Seon Ho Impress With Their Natural Acting Despite Their Laughter In “Hometown Cha-Cha-Cha”

“Hometown Cha-Cha-Cha” has released a new behind-the-scenes video for episodes 3 and 4!

tvN’s “Hometown Cha-Cha-Cha” is a remake of the film “Mr. Hong” and stars Shin Min Ah as Yoon Hye Jin, a dentist who moves from Seoul to the seaside village of Gongjin, and Kim Seon Ho as Hong Doo Shik, an odd-job expert who helps everyone around town.

The two stars show off their cute chemistry in rehearsals and impress with their ease as their improvise throughout the scene. They’re later filming at home when Kim Seon Ho subtly wraps a tissue around Shin Min Ah’s melting popsicle, melting her heart as well.

As part of their large group scene, Kim Seon Ho practices for his live performance with the guitar. He practices as quietly as he can and mouths to the camera, “I’m… not good. I’m really not good.”

Once he’s done performing and everyone has gone home, Hong Doo Shik must piggyback a “sleeping” Yoon Hye Jin home. Despite his accidentally loud attempts at doing so, all their shots are surprisingly approved because of how natural they are able to make them appear.

The two are filming a drinking scene together when they are continuously unable to hold in their laughter, causing Shin Min Ah to spill some wine. Shin Min Ah asks the director in shock, “Can you see me?” as she explains, “It really came out of my nose.”

Watch the full clip below and don’t miss “Hometown Cha-Cha-Cha” on Saturdays and Sundays at 9 p.m. KST!