“Dali and Cocky Prince” is a new romantic comedy starring Kim Min Jae as Jin Mu Hak, a man who lacks schooling and book smarts but is extremely resourceful and talented at making a living, and Park Gyu Young as Kim Dal Li, a woman who is intellectually polished and comes from an elite background but doesn’t know how to take care of herself. Yeonwoo will be starring in the drama as Chak Hee, a lovable curator with a special connection to Mu Hak.

As the daughter of a National Assembly member who has power but has always lacked wealth, Chak Hee’s dream is to become part of a chaebol family and open her own museum. She met Jin Mu Hak through a blind date in the past, but they agreed that they are not each other’s types and are now more like best friends.

In the newly released stills, Jin Mu Hak and Chak Hee are dressed to the nines at a snack bar that services spicy and sweet tteokbokki (spicy rice cakes). Jin Mu Hak watches Chak Hee eat with a look of disbelief, and Chak Hee gazes coyly at him with a cute pout. At one point, he feeds her tteokbokki, but after she tells him something, he suddenly explodes with rage. This scene shows their ambiguous relationship, and curiosity is mounting over why Jin Mu Hak is devoting his precious time to Chak Hee. 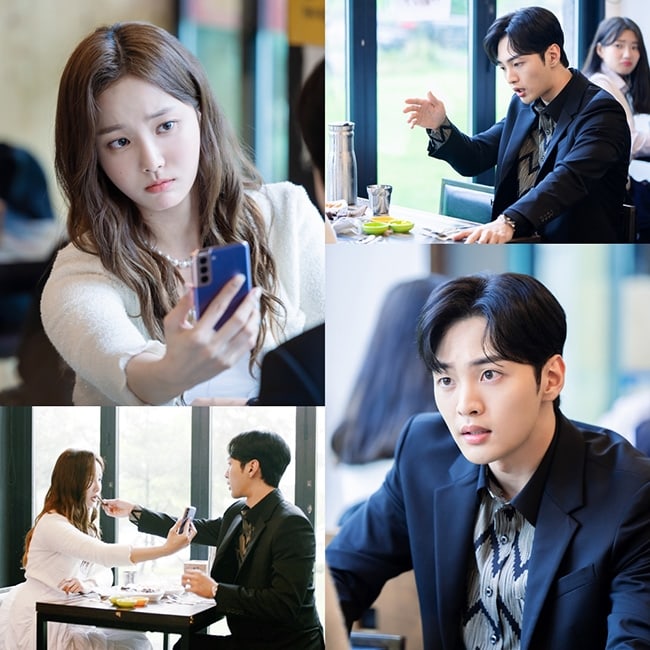 The producers of “Dali and Cocky Prince” teased, “Jin Mu Hak and Chak Hee have a unique past as blind dates, and they are in a relationship where they don’t cross each other’s boundaries. With Kim Dal Li’s appearance, Chak Hee will experience a change of heart.”

In the meantime, watch Yeonwoo in “Cheat On Me If You Can“:

Kim Min Jae
Yeonwoo
Dali and Cocky Prince
How does this article make you feel?