tvN has released some photos of the script reading for its upcoming drama “Happiness” (literal translation)! 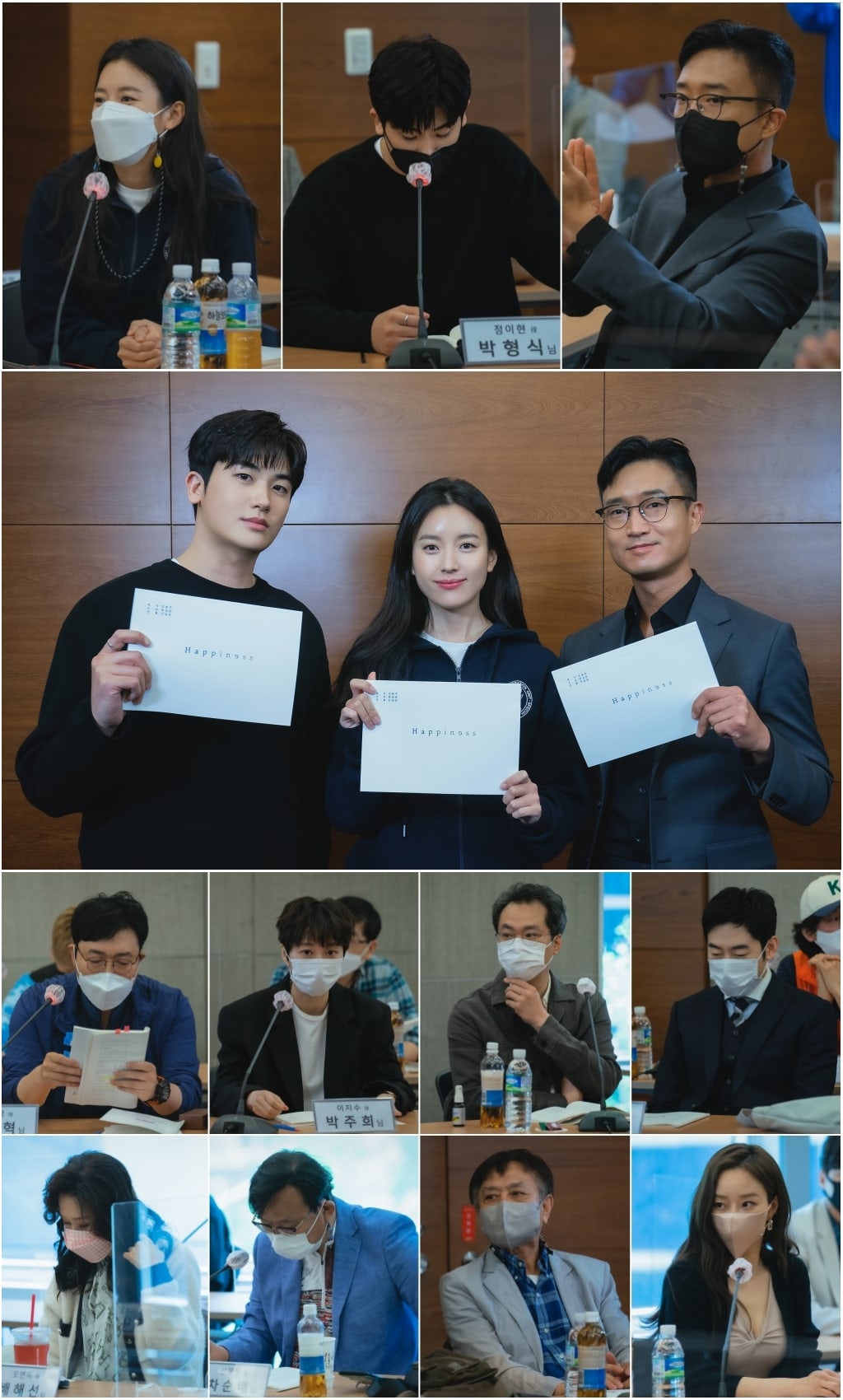 At the script reading, the actors realistically portrayed the fear, doubt, and wariness of their characters whose lives fell apart when they encountered extreme circumstances.

Han Hyo Joo perfectly transformed into the female lead Yoon Sae Bom, a tactical agent in the Seoul Police Special Operations Unit who is decisive and has fast judgment. Yoon Sae Bom is the type to put things into action as soon as she puts her mind to it. Han Hyo Joo made her character shine by depicting her sharp intelligence.

Park Hyung Shik turned into the male lead Jung Yi Hyun, an intelligent and honest violent crimes detective. He is surprisingly the romantic type who wants to pursue a sweet relationship with Yoon Sae Bom, who he attended high school with. The actor faithfully portrayed both the soft and strong sides of his character, and it will be intriguing to see how he will strive to protect himself and the one he loves.

Jo Woo Jin’s performance also stood out. He will be playing the role of commander Han Tae Suk of the Armed Forces Medical Command, who holds the key to the infectious disease. He’s in charge of secretly discovering the cause of the infectious disease and stopping it from spreading. Although Han Tae Suk has a polite and easygoing personality unexpected of someone who is a military intelligence personnel, he is a character who transforms in an instant, making him difficult to read. Jo Woo Jin brought Han Tae Suk to life by acting out his tiniest details.

All the actors worked together to realistically illustrate how humans work in order to survive and protect their precious things. Lee Joon Hyuk, a master of sly acting, will be playing Kim Jung Kook, a violent crimes detective who has close relations to Jung Yi Hyun. Park Joo Hee will be taking the role of Lee Ji Soo, Han Tae Suk’s right-hand woman and a lieutenant of the Armed Forces Medical Command.

Baek Hyun Jin will be starring as the troublemaker doctor Oh Joo Hyung who goes head-to-head with Jung Yi Hyun, while Park Hyung Soo will be playing the lawyer Kook Hae Sung. Bae Hae Sun and Cha Soon Bae will be acting as a married couple. She will take the role of Oh Yeon Ok, while he will play pastor Sun Woo Chang.

Park Hee Bon and Na Chul will play the romance web novel writer Na Hyun Kyung and her brother Na Soo Min, respectively. On the other hand, Han Joon Woo will take the role of the rich and unemployed Kim Se Hoon who is living in a penthouse.

The producers of “Happiness” shared, “‘Happiness’ depicts human desires and class discrimination against the backdrop of an apartment where people with various personalities and dreams live together. As the emotional variation of each character is important, the synergy of the actors is the most important work. The detailed acting of the actors depicts the realistic fear of the current progression more realistically. Please look forward to a new normal city thriller.”

“Happiness” will premiere in November via tvN and TVING.

In the meantime, watch Park Hyung Sik in “Strong Woman Do Bong Soon“: