Lee Jung Jae On What He Would Do With The “Squid Game” Prize Money, Chemistry With Lee Byung Hun & Park Hae Soo, And More

“Squid Game” star Lee Jung Jae recently shared his thoughts on the show’s charms, his chemistry with his co-stars, and much more!

On September 29, Lee Jung Jae participated in an online interview with Star News to discuss his hit series “Squid Game.” The drama is about a mysterious survival game with a reward of 45.6 billion won (approximately $40 million) on the line. 456 money-hungry participants wind up joining the game—only to learn that there is more at stake than just the prize money.

Lee Jung Jae plays the role of Sung Ki Hoon, a man who falls into a dire situation due to unemployment, divorce, gambling, and debt. Despite not even being welcomed by his own family, he does not lose hope or his sense of humanity.

Although Lee Jung Jae does not use social media himself, he shared that he was most definitely feeling the popularity of “Squid Game” in other ways. He commented, “Should I say I see it with my eyes? I lurk on social media. I can feel the popularity. I’ve been seeing lots of people upload photos. The cast members have also been uploading photos onto social media. Even just this morning, I was asked, ‘Can I upload this photo of us together?’ So I told them to upload it.”

He continued, “From my colleagues to even acquaintances, I’ve been getting a lot of calls and texts these days. I’ve been getting lots of congratulatory messages, so I’m thankful. The parody videos that ‘Squid Game’ viewers have been uploading are so fun. There are even people who make me think, ‘These people have way better ideas than us.’ I can’t look often as I’m currently filming a project, but I look on social media and laugh whenever I get a break.”

When asked what he thinks catapulted “Squid Game” to global success, Lee Jung Jae answered, “There are a lot of unique aspects. Even apart from Korean content, it’s probably a very unique concept. The scenario features a complex combination of a variety of aspects, and I think the filming and characters were all part of that harmony.”

Eagle-eyed viewers noticed a scene in the drama where Lee Jung Jae pretends to eat, which recently went viral. Lee Jung Jae explained, “When you film an eating scene, you eat really diligently in the first take. By the third and fourth, you get full and start to cut corners. I think that since I had my back to the camera, I thought I wouldn’t show up on screen and tried to cut corners. I did eat when I was facing the front. I think they just used that while editing.” He added with a laugh, “I guess even while editing, they didn’t notice.” 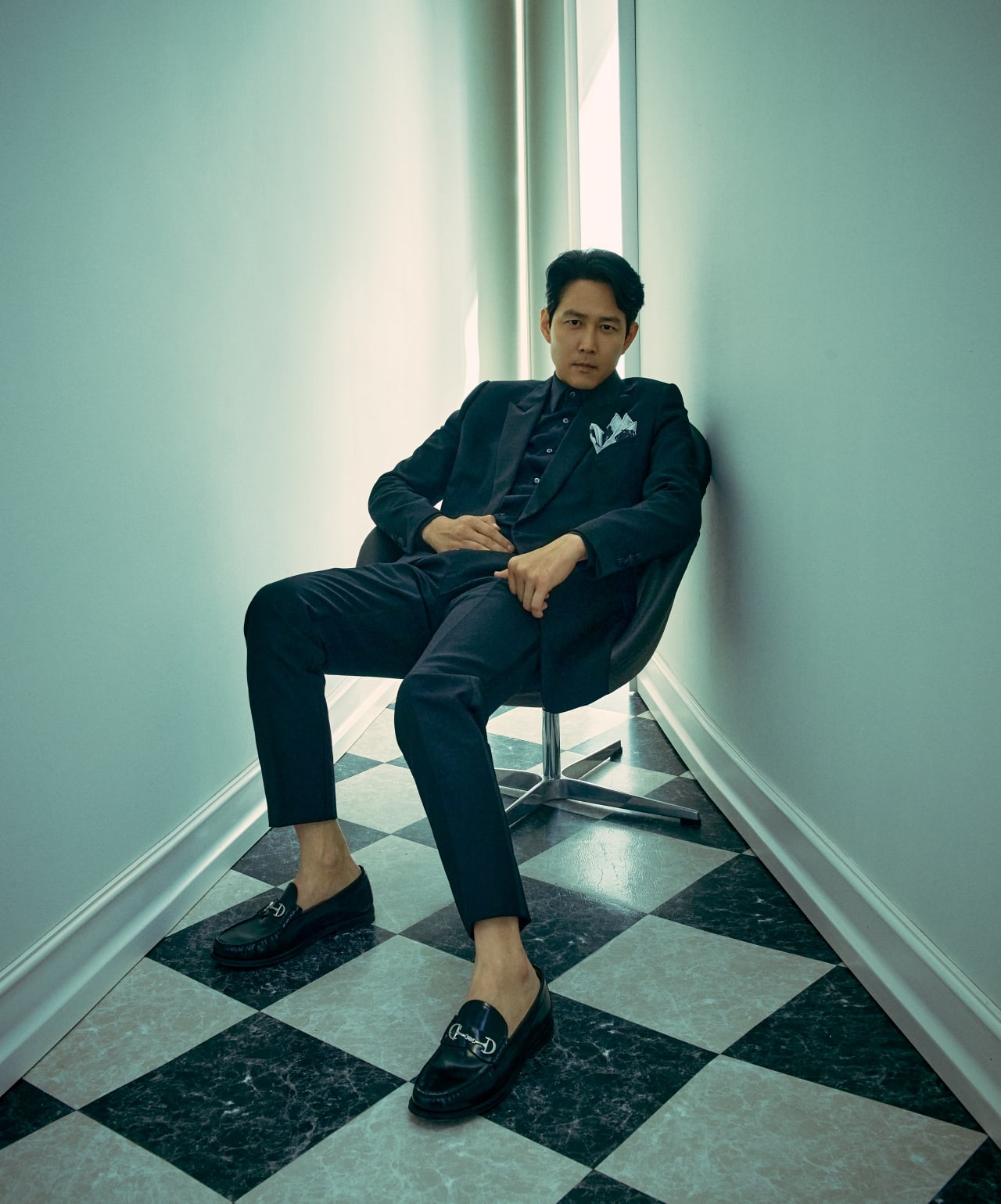 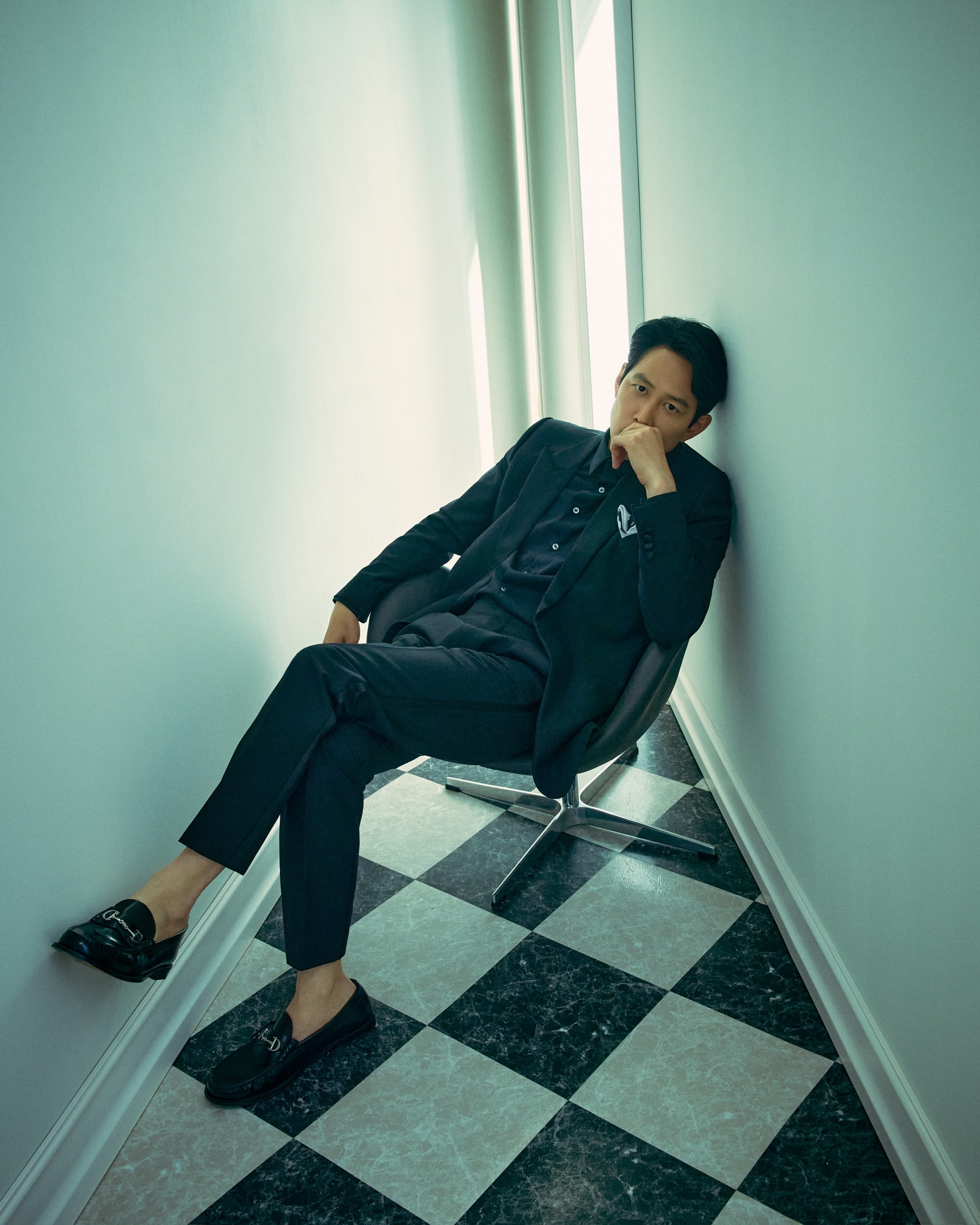 At the end of the series, Lee Jung Jae’s character returns home and boldly dyes his hair a bright red. The actor shared the reason for this, saying, “The red hair was originally in the script. I remember talking with the director about why he had to have red hair. Red hair is a color an average man of Ki Hoon’s age would never do. I think it was an effort to show that he was going beyond a certain limit.” Lee Jung Jae added, “I was in a situation where red hair would’ve made me unable to do other work. It wasn’t dyed; I just wore a wig that fit really well.”

When asked how he would like to resemble his character Ki Hoon, Lee Jung Jae responded, “Honestly, I’m not sure whether people overseas will relate to Sung Ki Hoon wanting to help others and actually helping others in such an extreme situation. However, I think it captures the emotions of Koreans well, so I didn’t think it was strange when I read the script.”

He continued, “I read it thinking that he was a warmhearted person. There was no aspect [of the character] that I felt I couldn’t act because I didn’t understand it. Because of that, the character of Sung Ki Hoon looked kind of cute. Although it’s a TV show, I also think that Sung Ki Hoon’s personality was transformed into a message.”

Lee Jung Jae also shared his personal thoughts on why he had found “Squid Game” charming, explaining, “I liked the concept. It’s a survival game for adults, but there’s an element of horror in the setup of playing childhood games. You could say the genre is survival, but the screenplay includes details of all the sorrows and troubles of the contestants and why they had to resort to this. In order to not exaggerate those points, they’re slowly piled up one by one from Episode 1, and then it emotionally and effectively explodes at the end. I felt that that set it apart from other survival films. I thought that it was good from the start.”

He went on to give insight into the set, sharing, “On our set, there was actually a huge doll placed in a wide open space and 456 people really ran around to play ‘Red Light, Green Light.’ The tug of war and glass bridge got a lot of help from computer graphics, but there was no way I could’ve guessed its scale just from reading the script. Because of that, I was so full of curiosity about how the set would be arranged every time I went to film. Whenever we got there, the set would be done so well that we would all be busy taking photos before filming.” 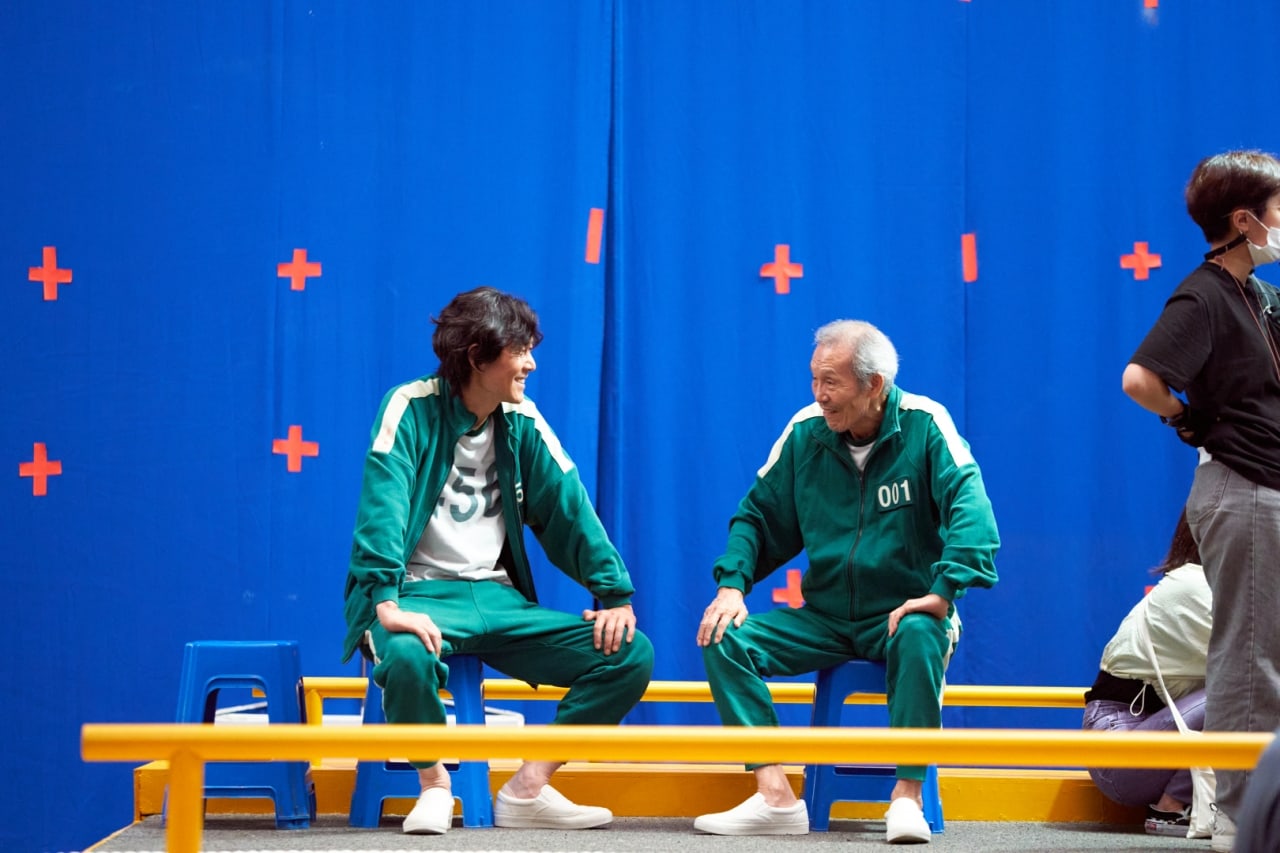 Next, Lee Jung Jae spoke about his chemistry with co-stars Park Hae Soo and Lee Byung Hun. Park Hae Soo played Jo Sang Woo, Sung Ki Hoon’s childhood friend. Lee Jung Jae shared, “As [Park Hae Soo’s] foundation was so strong with his theatre experience, he interpreted and built his character in a very deep manner. While he had depth, he also tried to look at different aspects. He has a lot of cute sides and was humorous on set. I guess you could say he was the mood maker.”

He continued, “In terms of acting, since he was the friend who went to the very end with me, our chemistry was good. He has such a good personality. We went through all the seasons together and filmed from when it was most hot to when it was most cold. We filmed the final scene on a cold day while rain sprayed down on us, and I think the cast and crew were able to overcome all the difficult parts thanks to his bright personality.”

Lee Byung Hun starred as the “Squid Game” front man who oversaw all matters regarding the game, but his identity was only revealed at the end of the series. Lee Jung Jae commented, “Lee Byung Hun and I had always just said, ‘We have to work together eventually,’ ‘Let’s do it sometime.’ We’ve been close since our debuts. We were even under the same agency for a few years. Our friendship is unique. Somehow, we just never had the opportunity [to actually work together].”

He shared, “I don’t know if it’s because of his relationship with director Hwang Dong Hyuk, but he made a special appearance in ‘Squid Game.’ With me, we only met for one scene. If there were a ‘Squid Game 2,’ I’d obviously want to work with Lee Byung Hun. Even if I can’t come out in Part 2, I’d want to work together in another project.”

Watch Lee Jung Jae in the film “Assassination” below!