Kim Sae Ron made a lasting impression with her role in Kakao TV’s “The Great Shaman Ga Doo Shim”!

“The Great Shaman Ga Doo Shim,” which aired its last episode on October 8, is a fantasy romance drama starring Kim Sae Ron as Ga Doo Shim, a teenager with supernatural abilities who just wants to be an ordinary high school student, but was born to the fate of becoming a shaman. Nam Da Reum stars as the school’s “golden boy” Na Woo Soo, who starts seeing ghosts after meeting Ga Doo Shim.

Kim Sae Ron poured her heart and soul into her role, leading viewers to become even more immersed in the drama. Here are three ways she kept viewers’ eyes glued to the screen with her versatile acting skills.

1. Her charisma when fighting the evil spirit

Ga Doo Shim, destined to become a shaman like her mother and grandmother before her, ran into an evil spirit who was taking the lives of the low-level students at the school she had transferred to. She decided to use her special abilities to protect her friends, giving viewers plenty of entertainment while fighting against the spirit with all her strength.

Although Kim Sae Ron had to fight against an invisible force, each of her fighting scenes is filled with a thrilling tension. Most notably, in her final battle with the evil spirit, Kim Sae Ron stole the show with her intense charisma and determined gaze.

Ga Doo Shim slowly opened up her heart to Na Woo Soo, who could see ghosts just like her. While sharing her world with Na Woo Soo, she began to develop feelings for him. She then confessed to him with their first kiss when she decided to become the lowest-ranked student in the school, as she was uncertain whether or not it would be their last.

Kim Sae Ron portrayed the honest and straightforward feelings of someone in love without any extra flair, leading to a sweet on-screen chemistry with Nam Da Reum that made viewers’ hearts race.

Kim Sae Ron helped her character grow through her detailed and subtle acting abilities. Having previously treated her friends coldly, Ga Doo Shim soon became someone who would give herself to them endlessly. As someone who used to resolve her problems independently, she then took on the fight against the evil spirit with Na Woo Soo and her other friends.

Kim Sae Ron not only expressed these changes in relationships with her character’s friends, but also evoked emotional responses to her on-screen family in order to see her character through her development. 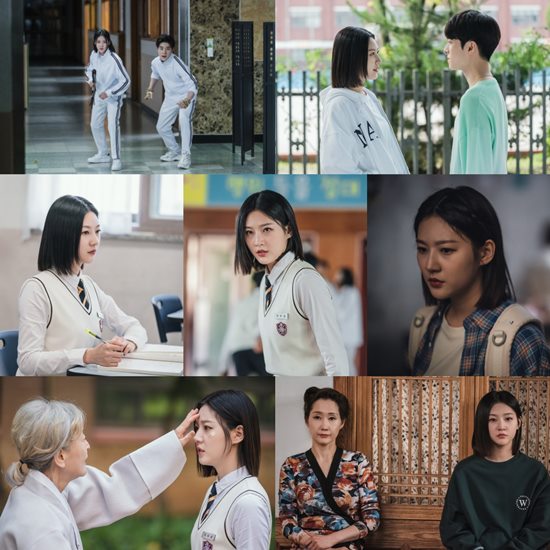 Having established herself as a lead actress with her superb acting skills in “The Great Shaman Ga Doo Shim,” Kim Sae Ron has now built anticipation for her upcoming projects. She has recently completed filming for the 2021 KBS short-form drama special “Those Women” (literal translation) and is also set to appear in the teenage romance film “Every Day, We” (literal translation).

Kim Sae Ron
The Great Shaman Ga Doo Shim
How does this article make you feel?