Song Joong Ki explained that it’s his first time coming to the film festival in almost 10 years. He shared, “10 years ago, I saw ‘A Werewolf Boy’ at the very back seat in theaters with director Jo Sung Hee and Park Bo Young. I’m touched to think I’ll watch while sitting with director Jo Hee Sung again this time. If there’s something that’s different, it’s that I watched with Park Bo Young back then, but I’ll be watching with Jin Sun Kyu this year.” He joked, “The lineup is kind of gloomy,” but also said, “I’m excited to be with director Jo Sung Hee and Sun Kyu, whom I like.” 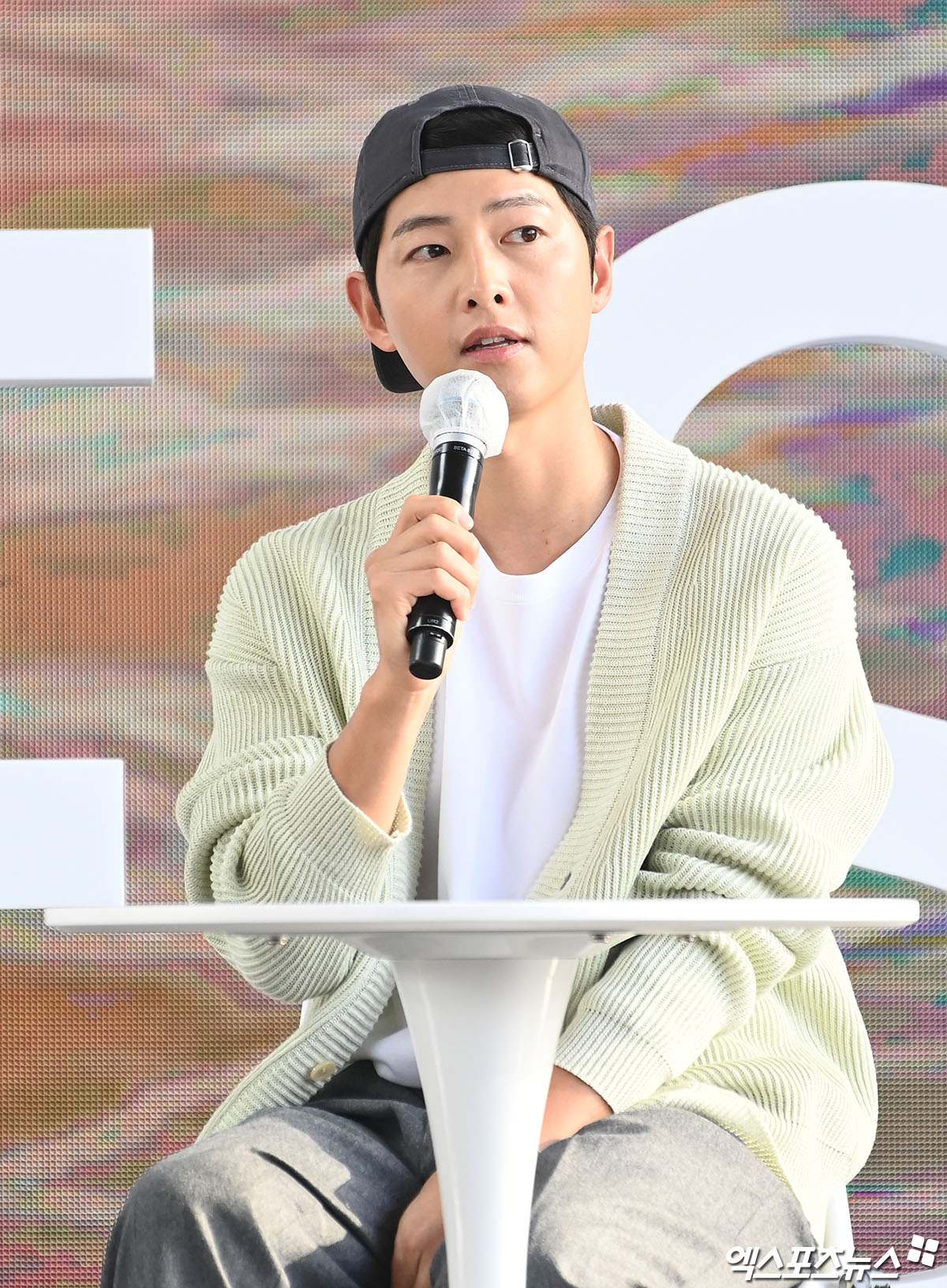 The actor expressed how glad he was to come to the film festival, especially after seeing all the well-known directors and veterans from the film industry as well as all the effort put in by the industry people to set up the event.

Song Joong Ki touched on his complicated feelings of wanting to greet viewers but facing the difficulty of doing so during these times. He shared, “From an actor’s perspective, I personally really enjoy greeting viewers after a premiere. We aren’t able to do that now. Personally, I agreed to be the MC for the Busan International Film Festival’s opening ceremony because I wanted to enjoy this atmosphere.” He added, “Although there are people who are having a more difficult time because of COVID-19, it was difficult for me not to be able to communicate as an actor. I’m happy to meet the audiences like this.” 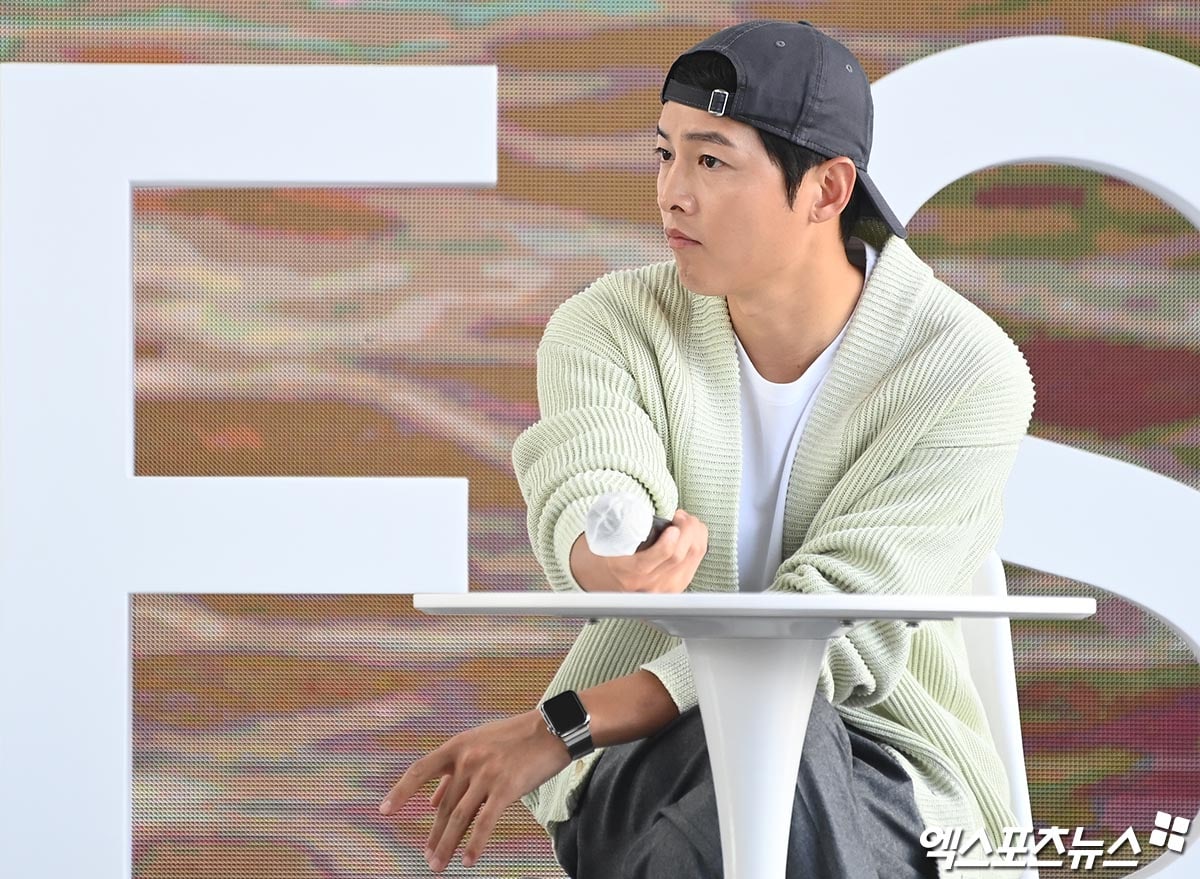 Song Joong Ki revealed how happy he is to have Jin Sun Kyu with him, but he also mentioned that it’s a shame that Yoo Hae Jin and Kim Tae Ri couldn’t also join them at the festival. Song Joong Ki explained that he had been surprised by the mixed responses for “Space Sweepers” as well as the fact that many people from all over the world had seen it, making him curious about the reason. Mentioning how “Vincenzo” is also loved abroad, Song Joong Ki commented, “I’m grateful, of course, but I’m also curious. Since I only hear that people like it, it doesn’t sink in.”

On his plane ride to Cyprus for his upcoming film “Bogotá,” Song Joong Ki had seen three people next to him watching “Squid Game.” He explained, “Seeing that, I got the thought that foreigners also must have watched ‘Space Sweepers’ just like that. I was happy to hear ‘Squid Game’ is popular, even though it’s a project that has no relation to me. I felt the impact, thinking that foreign viewers watched ‘Space Sweepers’ and enjoyed it. I got the thought that I should do even better with a greater sense of responsibility in the future.” 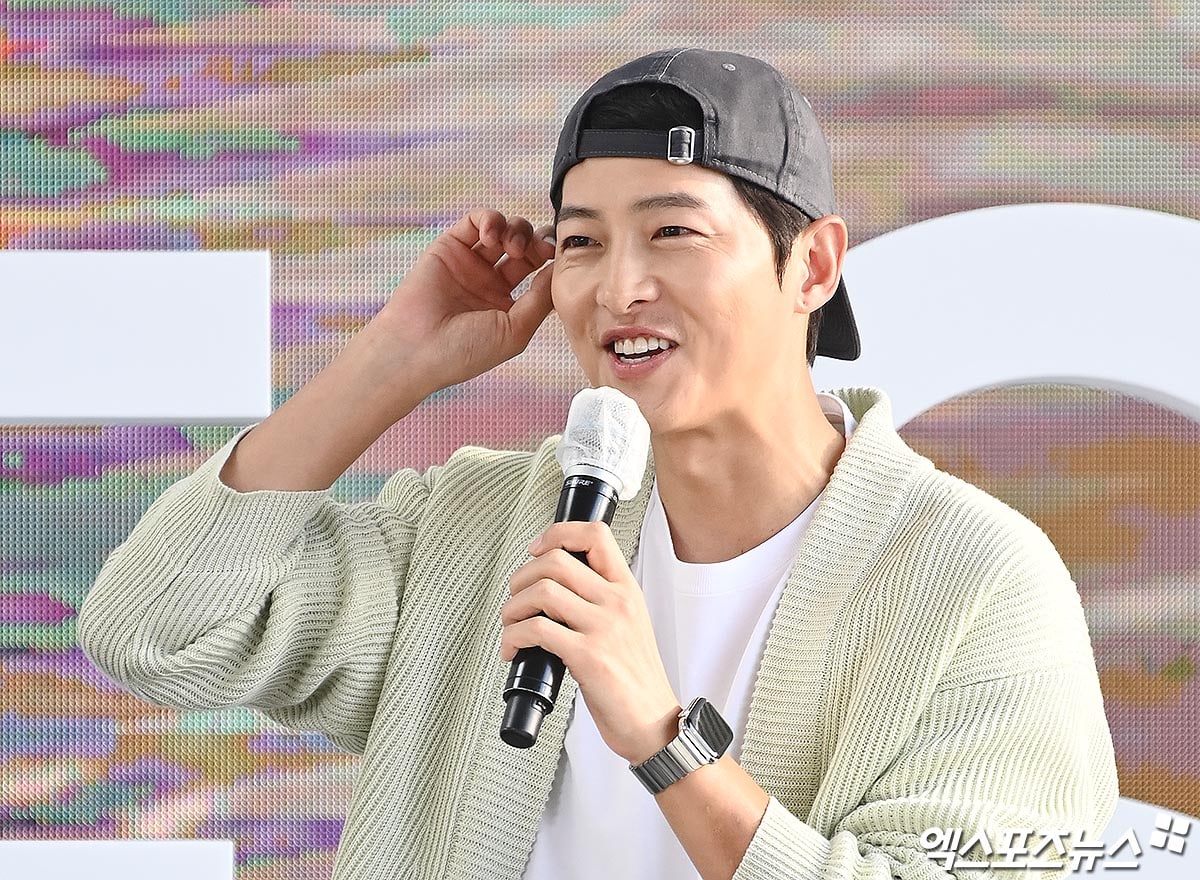 When asked how he feels about “Space Sweepers” not showing in theaters, Song Joong Ki jokingly mentioned, “Every time I receive this question, the Netflix employees always look at me from the side to see how I’ll answer.” He added, “Rather than what format the film is revealed through, it’s more important whether or not the film gets released. The film was released, and as a result, we were invited to the Busan International Film Festival where I could meet the audience.” Song Joong Ki explained that he’s very thankful that “Bogotá” could be released because it took almost two years to film after he first went to Colombia in November 2019 with just Kwon Hae Hyo and Lee Hee Joon and without their managers. 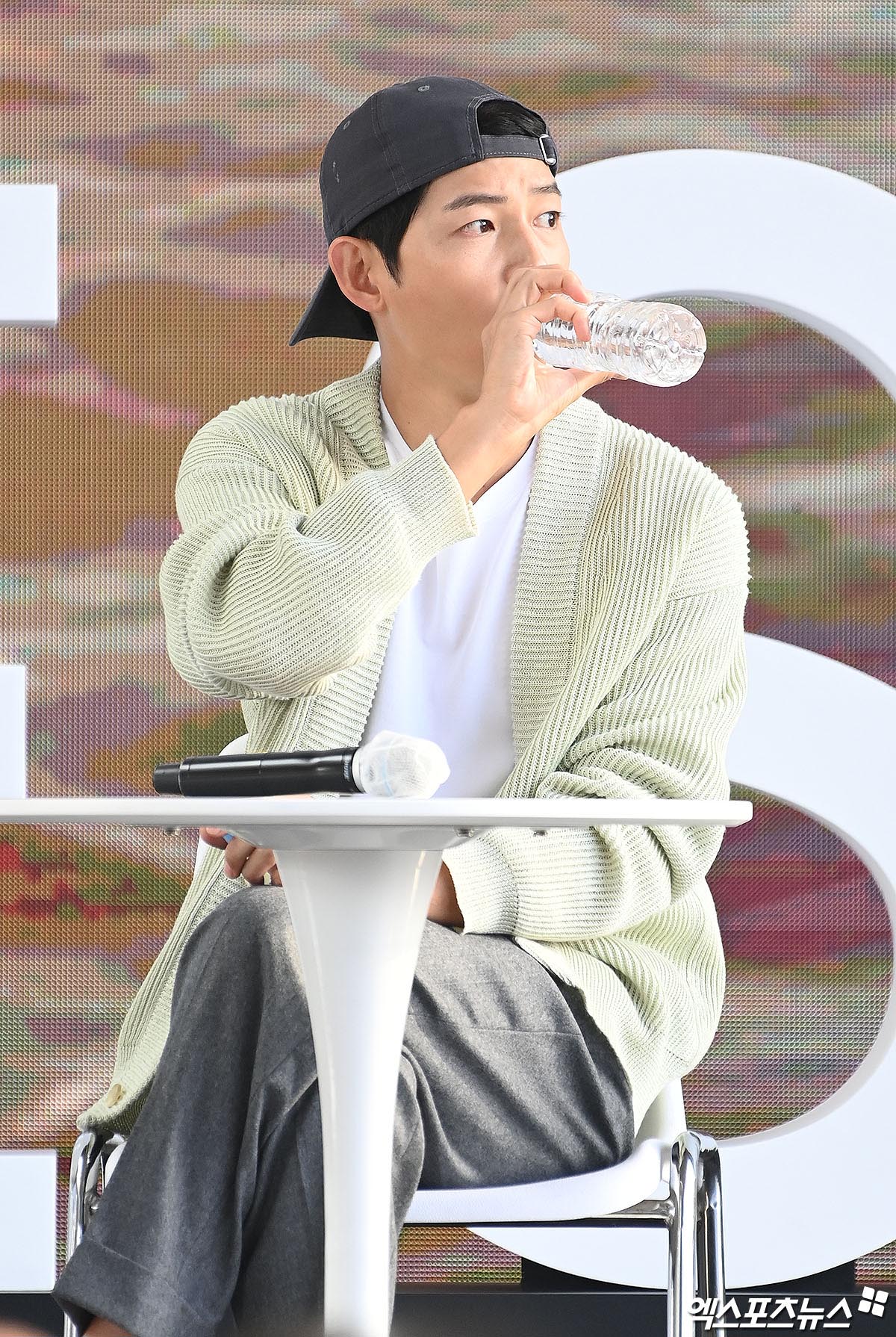 The interviewer asked the actor how he thinks of himself from 10 years ago, and the actor replied, “There’s not much. I just think I’ve aged a lot. I think I still lived diligently, and I feel as if I should live even more diligently.” He added that the film festival made him feel as if he should work hard on filming even more projects, explaining, “My next project is a drama. After doing that project, I think I should quickly take on another good film.”

Song Joong Ki stressed that he likes giving off a natural atmosphere. Revealing that he often met director Jo Sung Hee after “A Werewolf Boy,” Song Joong Ki wondered if he was given the role of Tae Ho from “Space Sweepers” because the director had a certain image of him. He elaborated, “I’ve thought on my own that the director perhaps gave me the role because he feels similar to me. I often thought that we’re similar too.” 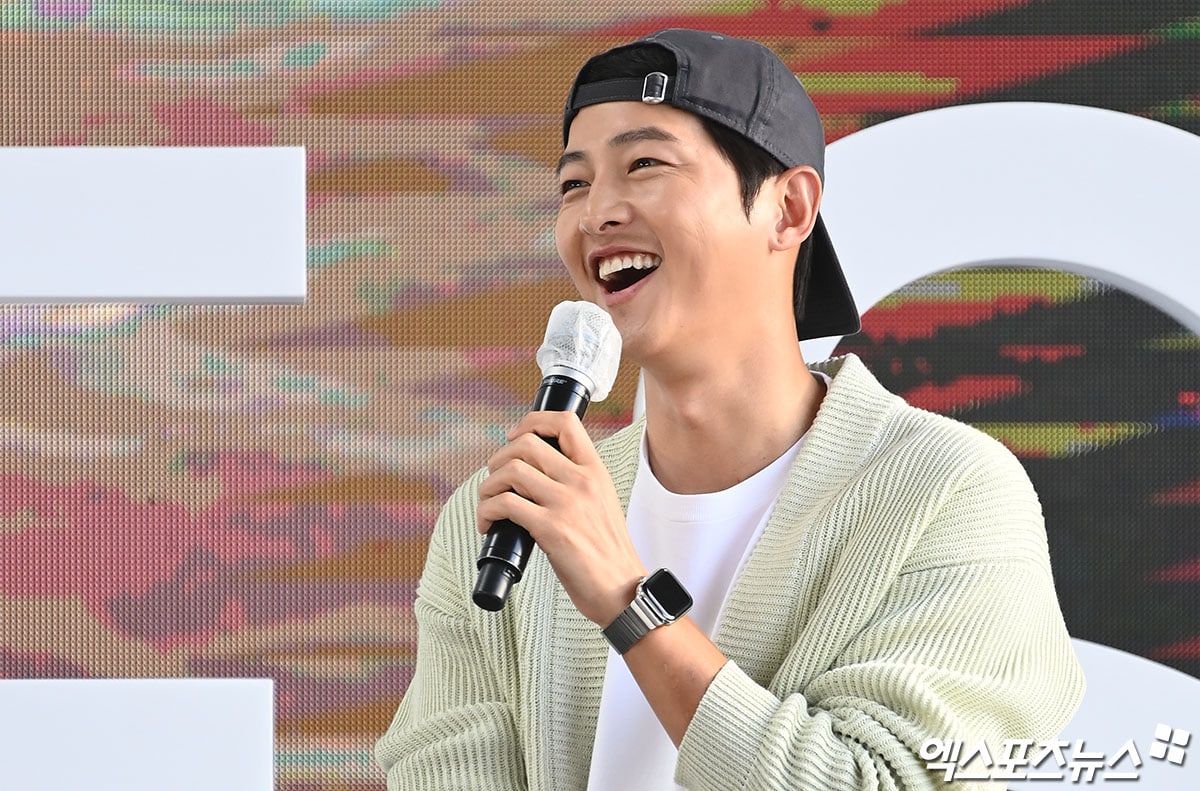 The actor also talked about his reunion with “Vincenzo” co-star Jeon Yeo Been for the first time in a few months. He shared, “I arrived first, and I looked because I heard actress Jeon Yeo Been being called, and many fans enjoyed it, saying ‘Vincenzo (Song Joong Ki) is looking at Cha Young (Jeon Yeo Been).’ My chemistry with actress Jeon Yeo Been was great because we were together the most during the eight months while filming ‘Vincenzo.’ In my opinion, our teamwork was good because Yeo Bin adjusted to me very well. She’s a very considerate person. She’s considerate of the actor playing opposite her, and in that aspect, our personalities fit well together.” 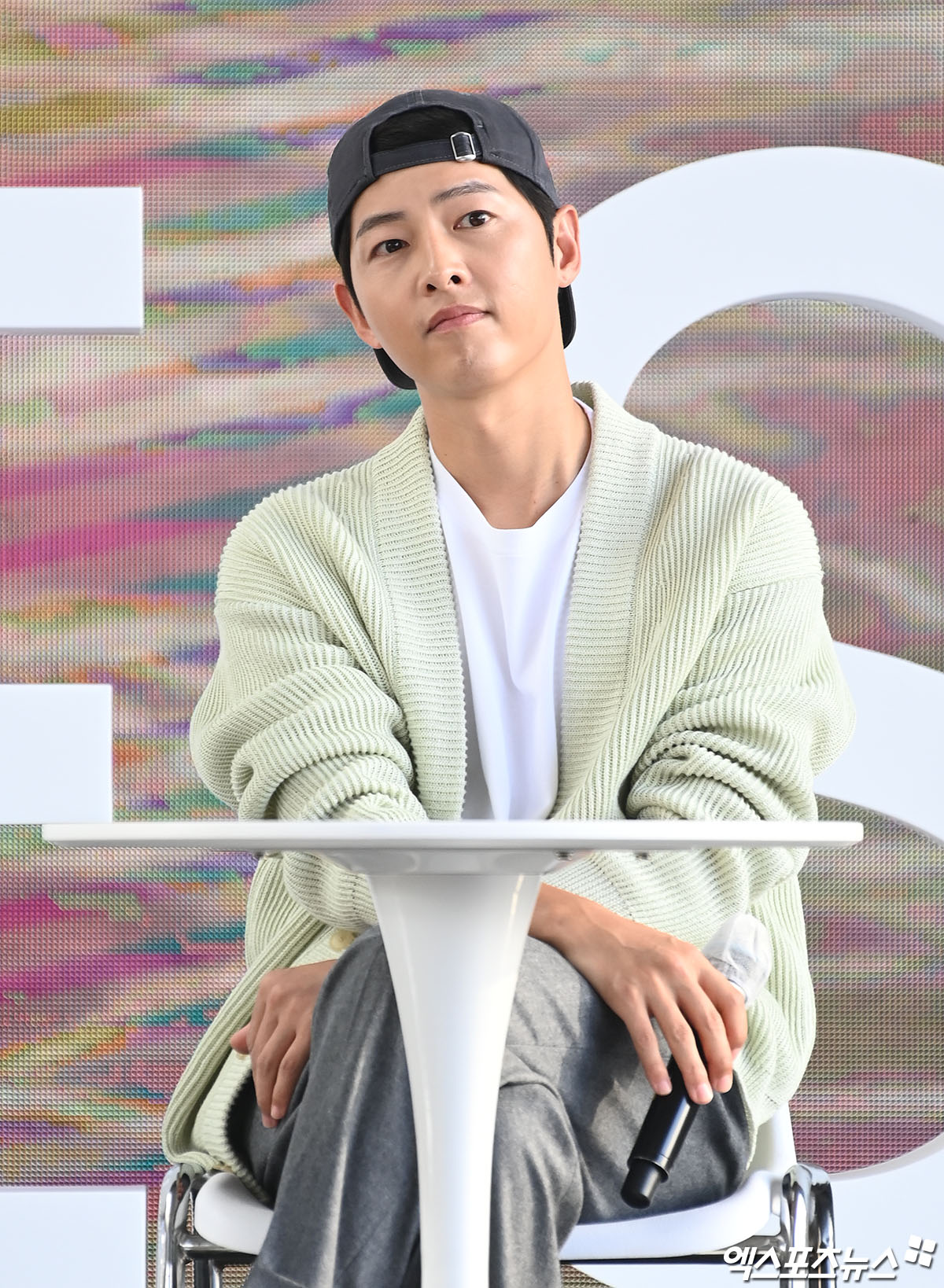 After viewing the screening for “Space Sweepers,” Song Joong Ki shared that he was very satisfied. Recalling how he attended the guest visit (GV) event at the exact same location 10 years ago, Song Joong Ki talked about how touched he felt, especially to receive such great feedback from the viewers. He added, “It’s my film, but I felt happy to see a fun film on the big screen for the first time in a while.”

Watch Song Joong Ki in “Descendants of the Sun” below: