Warm Romances, Cute Grandmas, And More: What To Watch After “Hometown Cha-Cha-Cha”

There’s nothing quite as saddening as when an amazing K-drama comes to an end, and unfortunately, “Hometown Cha-Cha-Cha” has reached its final episodes. Following an epic love story between odd-job expert Hong Doo Shik and dentist Yoon Hye Jin, this drama had a fatal dose of romance, comedy, lovable supporting characters, and more. So it will come as no surprise that there may be a gaping hole in your heart, because who wants to say goodbye to such a well-written story?

Luckily, we’ve rounded up the best dramas to help you fill that gaping hole. If you love warm romances, cute grandmas, and quirky supporting characters, you’re sure to find something on this list to enjoy.

If you love warm romances

“When the Camellia Blooms,” “What’s Wrong With Secretary Kim,” and “Strong Woman Do Bong Soon”

Although K-dramas are filled with action, adventure, fantasy, and more, one of the best things about them is that they offer a never-ending amount of options for romance. And what better way to help ease missing Yoon Hye Jin and Hong Doo Shik’s romance than by watching another one?

If there’s one drama that truly fits the bill of filling the void after finishing “Hometown Cha-Cha-Cha,” it’s “When the Camellia Blooms.” This drama has it all: a small town, intriguing villagers, a slice of murder and mystery, and most importantly, a warm, comforting, and sickeningly-cute romance between the leads. The story follows Dong Baek (Gong Hyo Jin), a single mother who moves to a small town to open her own bar. There she meets Hwang Yong Sik (Kang Ha Neul), a police offer who falls for her at first sight. Since Dong Baek has a lot of baggage and is closed off, it takes a moment for Yong Sik to break down her walls. However, his positivity, kindness, and overall warm personality melt her heart (and ours). Much like “Hometown Cha-Cha-Cha,” this drama feels very healing and will keep you from feeling the post-drama sadness woes.

Then there’s also another buzzworthy and fan-favorite romance to watch (or rewatch) in “What’s Wrong With Secretary Kim?” Starring the legendary duo Park Seo Joon and Park Min Young, this drama follows the love story of a seemingly narcissistic CEO, Lee Young Joon (Park Seo Joon), and his secretary, Kim Mi So (Park Min Young), who decides to quit after working for him for years. These two have fiery chemistry, and their romance is fueled with bickering, repressed feelings, a mysterious childhood connection, steamy kisses, and basically everything you’d ever want in a K-drama.

Finally, there’s my all-time favorite, “Strong Woman Do Bong Soon.” If you like warm romances, there’s truly nothing better than watching (or again, rewatching) this puppy couple. Rich but lonely, CEO Ahn Min Hyuk (Park Hyung Sik) witnesses Do Bong Soon (Park Bo Young) use her super-strength to beat up gangsters, and he instantly falls in love with her. He hires her as his bodyguard and helps her train to control her powers. These two are absolutely electric on-screen, and there’s nothing quite as satisfying as watching Ahn Min Hyuk constantly stare lovingly at Do Bong Soon whether she’s looking at him or not. Much like Doo Shik and Hye Jin, these two support each other and help the other become better versions of themselves, so it will definitely help fill the void and make you forget about missing “Hometown Cha-Cha-Cha.”

While all the villagers in “Hometown Cha-Cha-Cha” were fun to watch, the one that was the hardest to say goodbye to was Gam Ri (Kim Young Ok). Played by the incredible Kim Young Ok, her scenes always had a way of making you smile and miss your own grandma (or someone in your life who has a similar role). Fortunately, Gam Ri isn’t her only role as a lovable grandma.

In “Coffee Prince,” she plays the grandmother of Choi Han Gyul (Gong Yoo). She is a bit pricklier than Gam Ri, and she wants to see her grandson settle down before she passes. The heart of the story lies in the romance between Han Gyul and Go Eun Chan (Yoon Eun Hye). When they meet, Han Gyul mistakes Eun Chan as a man and eventually hires her to help him escape all of the blind dates his grandmother has set up for him. Like a true conglomerate-owner, she isn’t always as accepting as you’d like her to be, but she still maintains a strong relationship with Han Gyul. Kim Young Ok is very spunky in this role, and you’ll enjoy seeing another side of her in this classic K-drama pick. 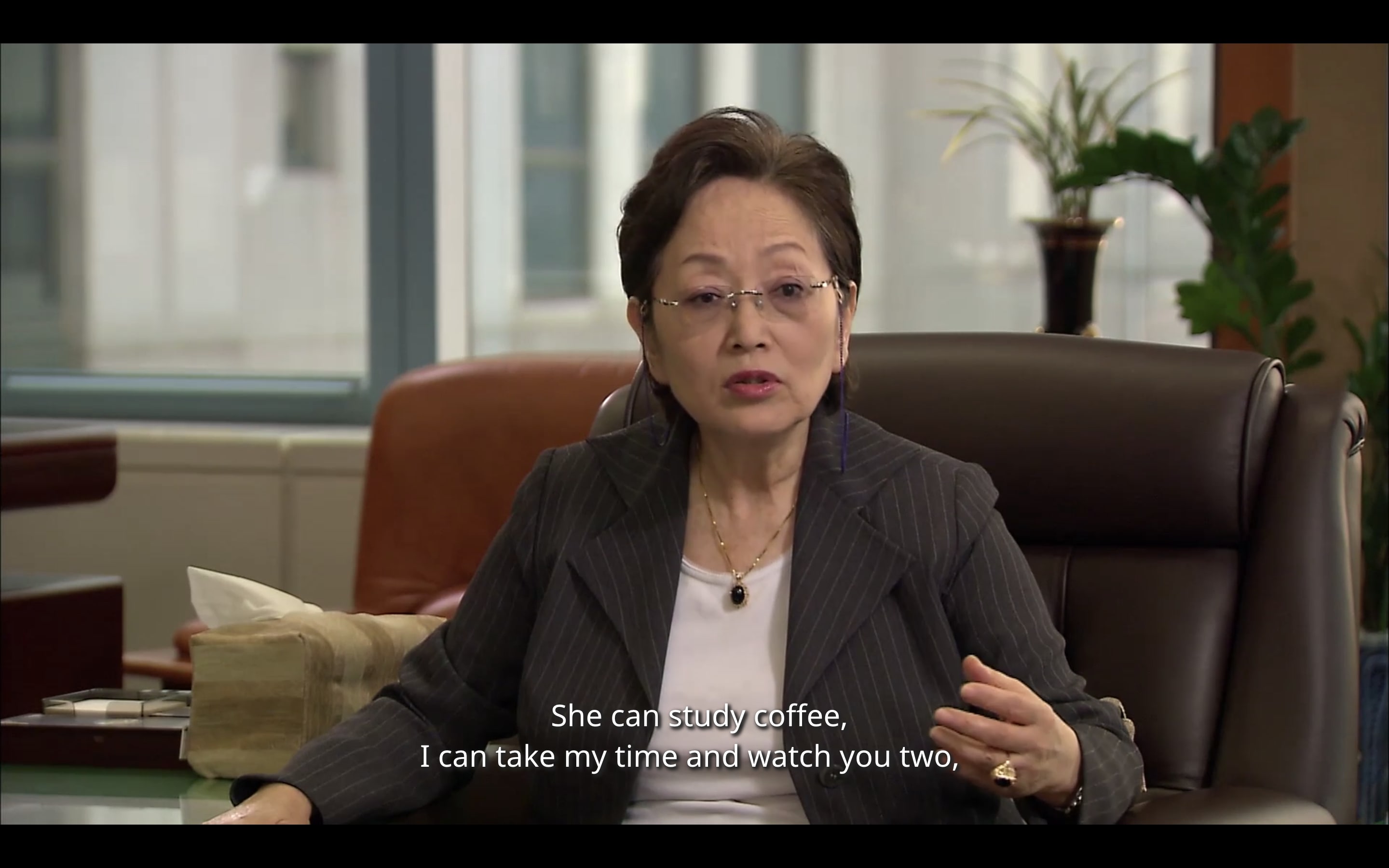 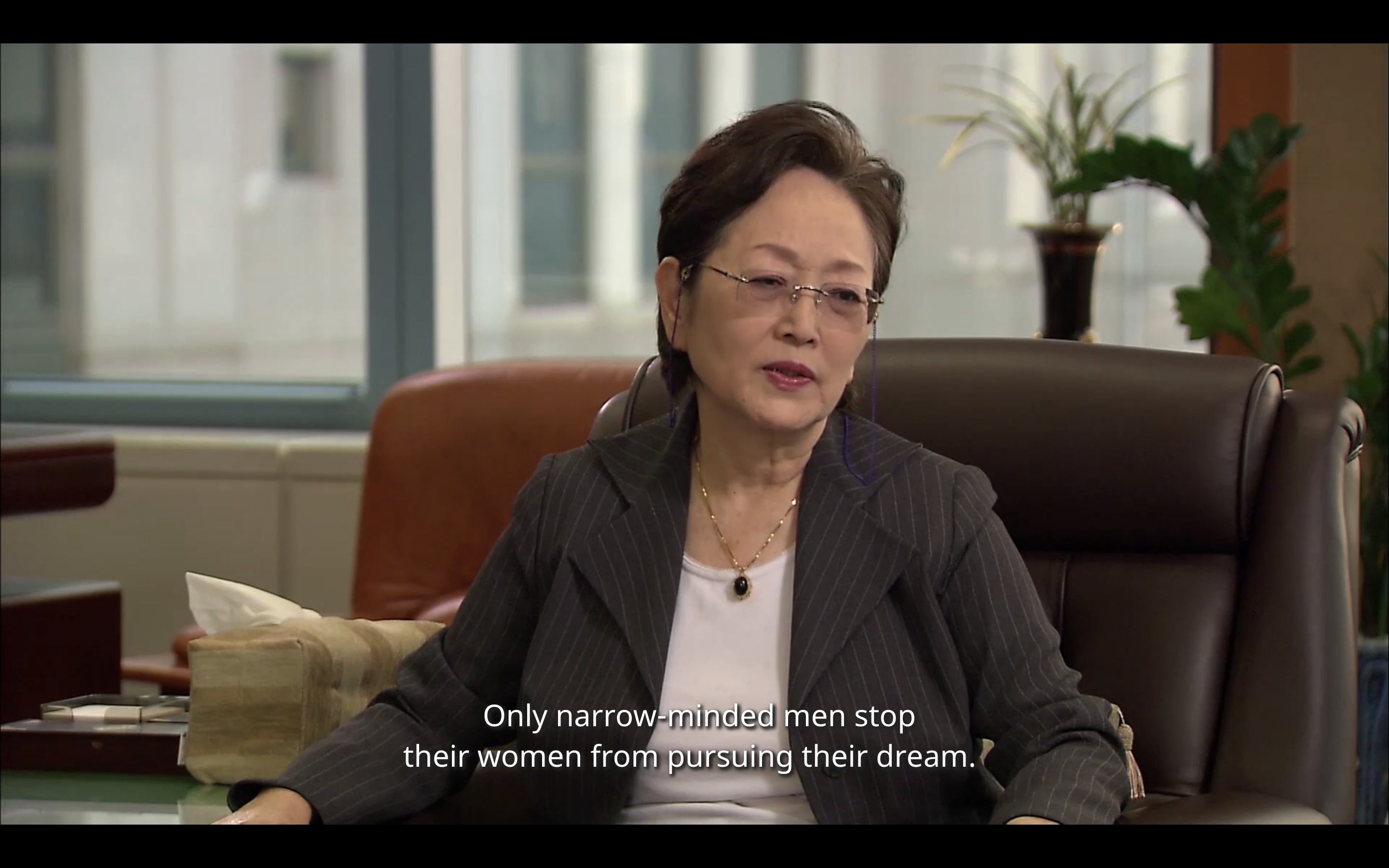 Then there’s “Shopaholic Louis.” Here, she plays Choi Il Soon, the grandmother of Louis (Seo In Guk). More in line with Gam Ri, Il Soon dotes on Louis. They have a very close relationship, until one day, Louis goes missing. Unable to remember who he is, the pair are parted for the first half of the drama. But spoiler alert: They do reunite and have tooth-achingly sweet scenes throughout the rest of the episodes. If you loved Gam Ri and Doo Shik, you will also love Il Soon and Louie. 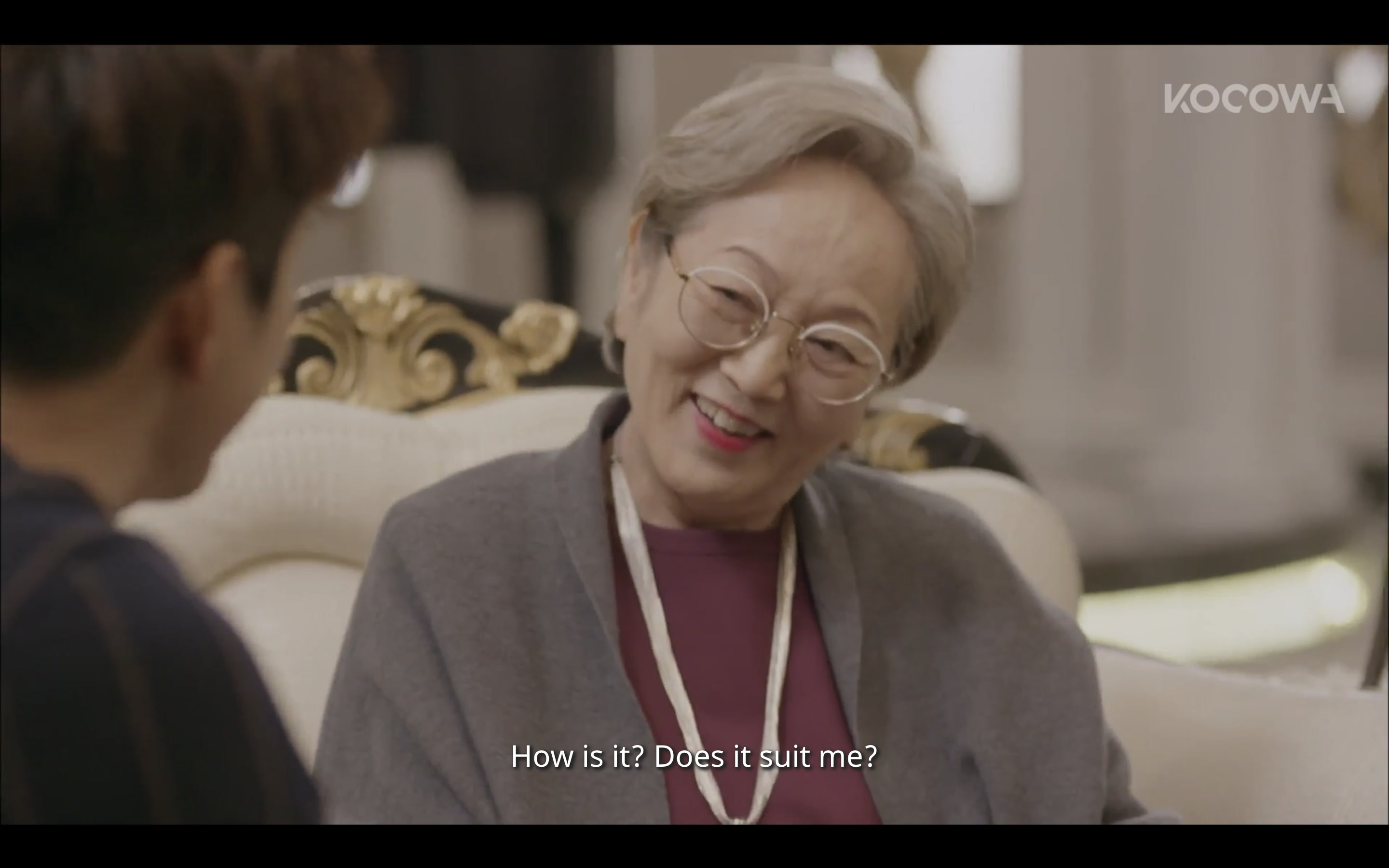 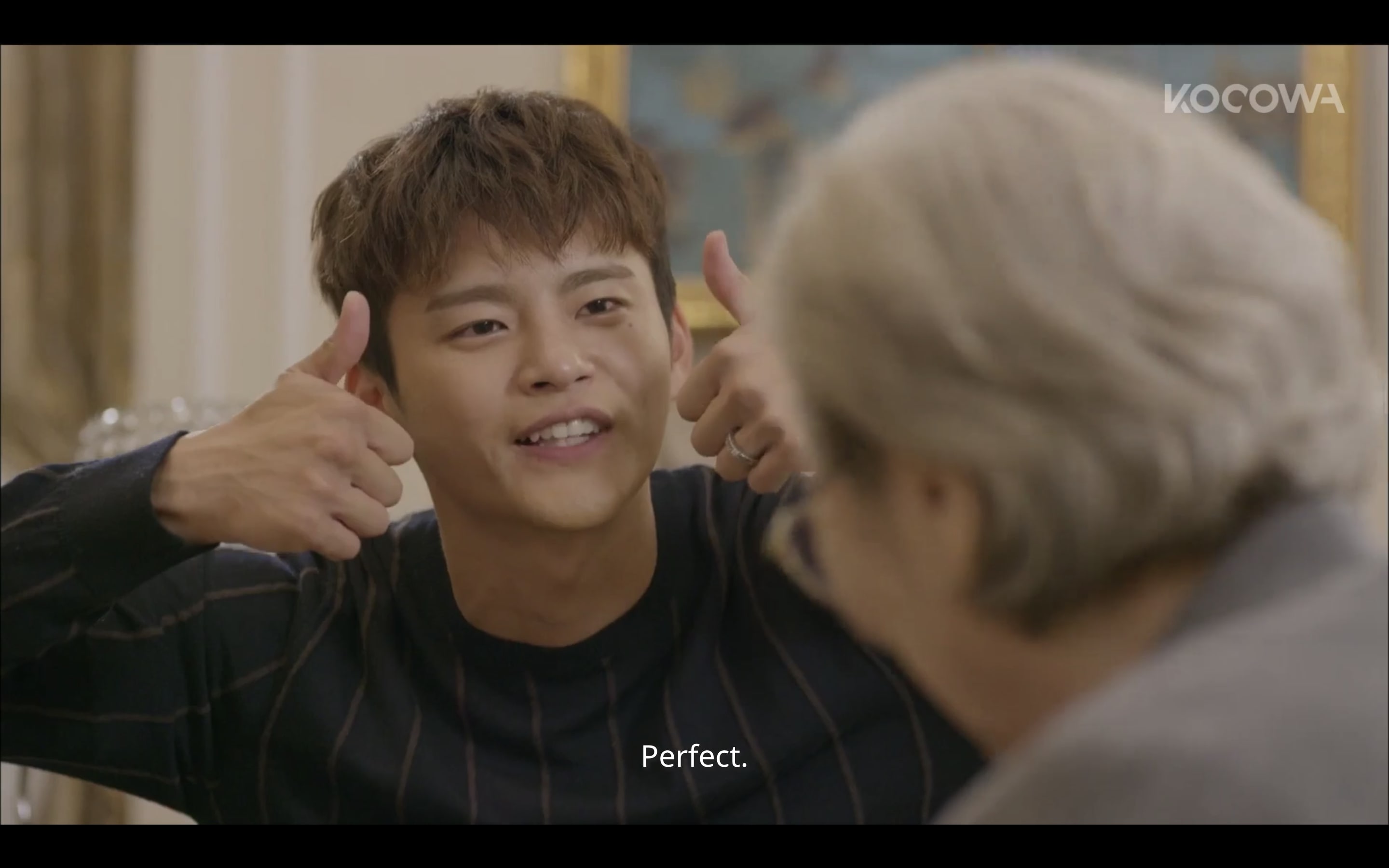 If you’re missing supporting characters to root for

“Touch Your Heart” and “Crash Landing On You”

Rooting for the leads is one thing when you watch a K-drama, but when there are supporting characters (and sometimes even secondary couples) to root for, the drama is even more enjoyable. The villagers of Gongjin, from the adorable kids to the cute and sassy grannies to the dysfunctional but loving families, all nestled their way into our hearts. While there are always supporting characters who manage to catch the eyes of viewers in any drama, there are only a few dramas where they forge a family with the leads. Two dramas that will also have you invested in their secondary ensembles are “Touch Your Heart” and “Crash Landing On You.”

“Touch Your Heart” follows the story of renounced actress Oh Yoon Seo (Yoo In Na) who goes to work at a law firm for three months in order to be cast in her dream comeback role. There, she works as Kwon Jung Rok’s (Lee Dong Wook) secretary and also gets close to the other lawyers who work there. The romance between the leads in this drama is definitely swoon-worthy, but the other characters shine as well. There’s an extra enemies-to-lovers relationship between Attorney Choi (Shim Hyung Tak) and Attorney Dan (Park Kyung Hye), a broken relationship with lingering feelings between Kim Se Won (Lee Sang Woo) and Yoo Yeo Reum (Son Sung Yoon), and a couple of one-sided crushes. Not to mention, there are standout actors like Oh Jung Se present in the lineup. Through team vacations and tough cases, this group of characters becomes one big family, which is definitely reminiscent of “Hometown Cha-Cha-Cha.”

Finally, there’s “Crash Landing On You.” Beloved by fans worldwide, who could ever forget Yoon Se Ri (Son Ye Jin) and Ri Jung Hyuk’s (Hyun Bin) relationship with his platoon or the ill-fated relationship between Goo Seung Jun (Kim Jung Hyun) and Seo Dan (Seo Ji Hye)? While we all definitely fell for the Romeo-and-Juliet-esque relationship between Se Ri and Jung Hyuk, the secondary characters in this drama are also responsible for its legendary status. Although the stakes are much much higher in this drama than in “Hometown Cha-Cha-Cha,” you still feel the same love, warmth, and sense of family between the characters. It will have you hooked and make you forget that you were mourning the end of a drama in the first place.

Hey Soompiers! Are you missing “Hometown Cha-Cha-Cha”? What are you watching to fill the void since it’s ended? Let us know in the comments below!

kaityv spends most of her time watching K-dramas even though she should be writing. If she’s not watching a drama then she’s for sure dying over BTS’s and Red Velvet‘s music and videos.

Soompi Spotlight
Coffee Prince
Strong Woman Do Bong Soon
What's Wrong with Secretary Kim
Touch Your Heart
When the Camellia Blooms
Crash Landing On You
Shopaholic Louis
Hometown Cha-Cha-Cha
How does this article make you feel?