The actor explained that he came to Korea in 2010 to study acting. He has completed his master’s at the Korea National University of Arts but is living in a semi-basement studio near the university to work on his thesis. He shared that he lived at the university’s dorms for four years, then a rooftop house for three years and a half, returned to the dorms for three years, and then came to his current home.

Anupam Tripathi revealed that he made his film debut in the box office hit “Ode to My Father” after showing his ability to use the Korean dialect during his audition.

Early in the morning, Anupam Tripathi boiled water and milk and cut ginger into slices for his morning tea routine. He shared, “I have tea time because I want to spend and enjoy at least five to ten minutes for myself.”

He called his family in India, and his mother told him that everyone was talking about him, praising him, and congratulating him on his success. His younger brother also said, “Everyone is complimenting you. They ask me if I’m your brother.”

In an interview with the show’s staff, Anupam Tripathi said, “Even before [‘Squid Game’] reached No. 1 in India, my family said they were so proud and happy. My mom was really happy, but she told me not to have my head in the clouds. It’s reassuring to have someone to tell me that.”

When Park Na Rae remarked that he must have had a hard time living on his own for 11 years in a foreign country, the actor responded, “Everyone has a hard time, so I don’t know about that, but I tried to get through the hardships with at least some happiness and joy.” He revealed, “In the first three months, I had food and everything around me was beautiful, but I cried all the time. I cried while studying Korean. At the time, everything felt uncertain, and I was uneasy.”

At home, Anupam Tripathi put some music on before taking a shower. He turned on BLACKPINK’s “How You Like That” and starting jamming out. Park Na Rae asked if he’s a fan of BLACKPINK, and he replied, “Of course!” Asked about his favorite member, he said, “You can’t say that. BLACKPINK is one.”

After washing up, he went to a restaurant near his house to eat spicy soft tofu stew. Regarding his favorite Korean food, he picked bean soybean paste stew for breakfast and lunch, makgeolli (Korean rice liquor) and pajeon (green onion pancake) on rainy days, and baked sweet potato when it’s cold. 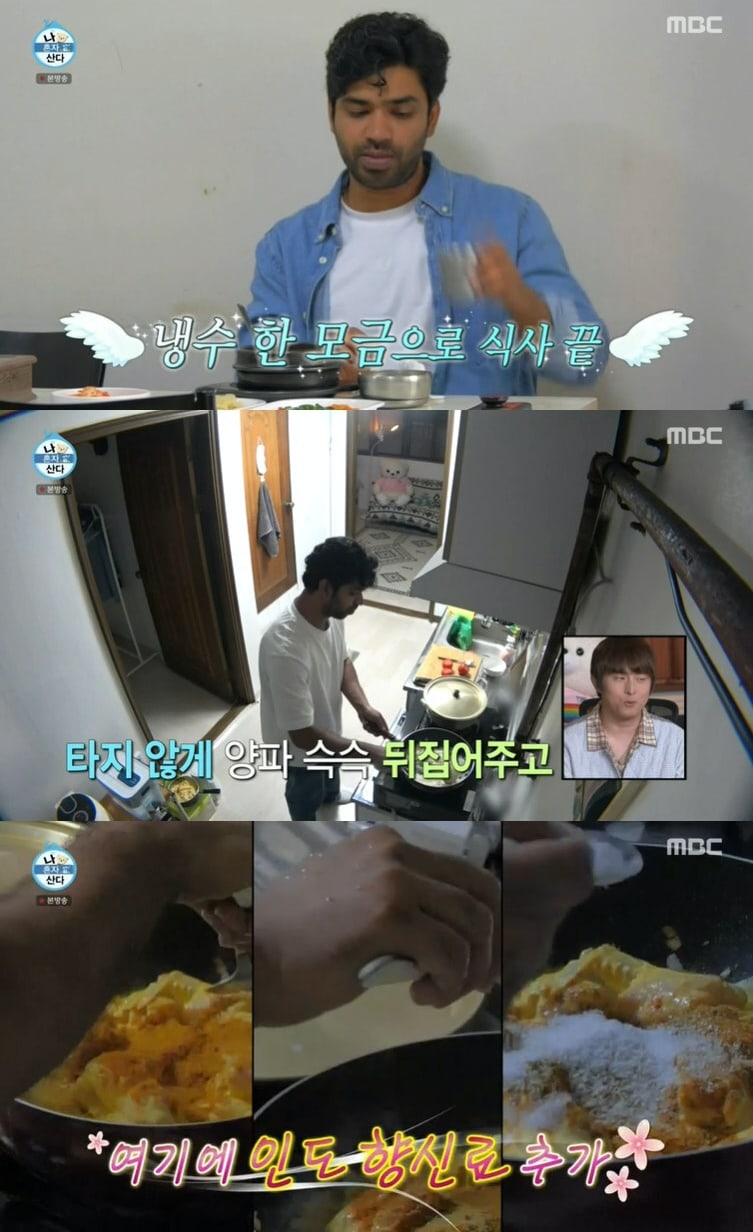 After his meal, he went to a grocery store to buy Indian ingredients and returned home to cook chicken curry and paratha (Indian flatbread). It turned out that the food was for his actor friends Park Ju Hyun and Park Pyung Jo who were visiting that day.

When they arrived, they congratulated him on his achievements with “Squid Game.” Park Ju Hyun shared, “When Jung Ho Yeon told me she was acting with you, I was happy about that, but I didn’t know it would do this well. Who would have known you would have taken the world by storm like this?”

Anupam Tripathi remarked, “I immediately became comfortable with them because they always said that I could do it. I don’t think I could have endured it if they weren’t there. I was able to hang on because I had friends like them with me. They looked up words in the dictionary and tried to explain to me in English. Even after 11 years, they’re a great source of support.”

While Anupam Tripathi was busy preparing chai tea, Park Ju Hyun began a surprise party for the actor. She turned off the lights and brought out a cake lit with candles.

Finally, Anupam Tripathi shared, “I’ve played various roles as a foreign worker. I was thankful for that, but I also want to wear a suit like James Bond and do action scenes, appear in dramas, comedies, and take on various roles.” He then said, “Meeting people is like receiving a gift each time. I learn about the stories they have. To me, they are like gifts.”

Watch the full episode below: