7 Korean Dramas And Movies To Watch This Halloween

With the days getting shorter and the nights getting longer, there’s no doubt that fall is upon us—which means Halloween is just around the corner. With that spookiest day of the year creeping ever-closer, it’s only natural to want to indulge our darker sides, especially when it comes to binging dramas and movie watching. But which Korean dramas and films are best when you’re looking for something a little less fluffy and a lot more creepy? Here’s a list of K-dramas and movies that are sure to get your heart racing!

Starring Lee Dong Wook and Jo Bo Ah, “Tale of the Nine-Tailed” may not seem like the most horrifying of dramas, but it really does have its fair share of creepy moments. Full of gods and demons, and a wide variety of supernatural beings, this drama has a lot going for it when it comes to all things dark and fantastic, but really, the best part of this entire drama is the chemistry between our reluctant fox hero and his human love interest. That being said, in the grand scheme of all things Halloween-y and horrifying, this drama is pretty mild, but for those who want to indulge in the dark and still be able to sleep at night, this drama fits the bill nicely.

If tormented souls and encounters with the dead are more your thing, you can’t go wrong with Gong Hyo Jin and So Ji Sub’s hauntingly delightful romantic horror drama, “Master’s Sun.” Tormented by the souls of those who have yet to pass on, it’s no wonder Gong Hyo Jin’s character can’t let go of So Ji Sub’s once she realizes his presence keeps the ghoulies at bay. Slightly horrifying at times, this drama still doesn’t rank high on the list of the truly terrifying, but it’s still worth a watch for those who are looking for a steamy romance and an occasional encounter with things that go bump in the night.

With Choi Jin Hyuk playing one of the most endearing zombies you’ll ever encounter, there’s no way “Zombie Detective” could be left off this list. The entire first episode alone is enough to make this drama worthwhile, as watching the once-living Moo Young (Choi Jin Hyuk) learn how to adapt to life as the undead is one of the most delightfully entertaining things this zombie-lover has ever seen. With the hero of this drama being a zombie himself, it’s hard to call this one scary at all, but it’s so much fun, it just had to be added to the list.

If you prefer your zombies with less heart and more bite, you’re in luck because “Train to Busan” delivers in every way. When the country is suddenly overrun by a zombie infestation, Gong Yoo‘s character must get his young daughter from Seoul to Busan, the last safe-zone in the country. Full of ravenous hordes, a superb mix of characters, and one of the best dads in cinematic history, this film delivers in all of the ways a great zombie film should. As for the fear factor, this film will certainly get your heart racing, but it is by no means the most terrifying zombie movie ever made. Still, the story and characters are so well-written that it definitely deserves a watch. Or two. Or three…

Set in the same zombie-filled world as “Train to Busan,” “Peninsula” is a stand-alone sequel which takes place several years after the conclusion of the first film. Starring Kang Dong Won and Lee Jung Hyun, this entirely new cast of characters must find a way to not only outrun a particularly ravenous zombie horde, but outsmart the rogue militia group currently hunting them down. With monsters of both the human and undead variety plaguing our heroes, this film is as equally terrifying as its predecessor, which means it’s definitely one you won’t want to miss. 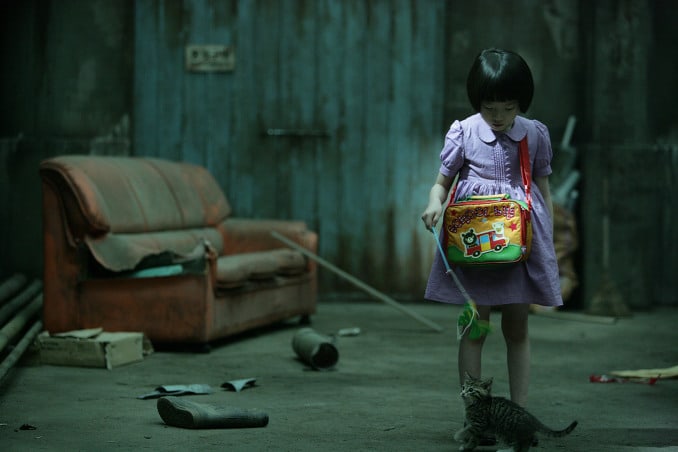 If you’re looking for a movie that delivers in all the ways a classic Korean horror film should, then “The Cat” is the film for you. After bringing a recently orphaned cat home with her, So Yeon (Park Min Young) is soon terrorized by visions of a cat-eyed girl. Horrified as she may be, things get infinitely worse when a string of murders leads her and her police officer friend Jun Seok (Kim Dong Wook) to connect these grizzly deaths to the cats each victim had recently adopted. Driven by a truly sadistic spirit of vengeance, this cat-eyed phantom and her feline friends are out for blood, and they’ve got the body count to prove it. While those familiar with the Korean horror genre probably won’t find any big surprises here, those who are new should find this film a frightful delight.

If supernatural horrors are what really gets your heart racing, “The Divine Fury” may be just the film for you. Haunted by hellish nightmares and plagued by a stigmata he can’t understand, Park Seo Joon is an MMA fighter who is forced to find help in the last place he ever wanted to be: the church. Joining forces with Ahn Sung Ki, the two soon find themselves battling demons in an epic war to save humanity, but it could end up costing them both dearly. If you find yourself unable to resist a classic battle of good versus evil, or if you just love a good story full of nightmares and demons, this film is definitely for you!

With so many fantastically frightening dramas and movies out there, it’s impossible to list them all, but this list should give you a good place to start. What we really want to know is, which dark dramas and macabre movies top your Halloween watchlist?

Master's Sun
Soompi Spotlight
Train to Busan
The Divine Fury
Peninsula
Tale of the Nine-Tailed
Zombie Detective
The Cat
How does this article make you feel?