“Happiness” is an upcoming apocalyptic urban thriller that takes place in the near future within an apartment that is stratified by social standing. The high-rise apartment becomes sealed off when a new infectious disease emerges, and the drama will depict the fear, psychological battles, and desperate struggles for survival that ensue.

Han Hyo Joo is the first actor to appear in the video, and she introduces her character Yoon Sae Bom as a tactical agent in the Seoul Police Special Operations Unit and a passionate person who can’t stand injustice. While monitoring the photos of her, a staff member tells her that even her worry lines are pretty, and she responds that she’s collected them little by little for the past six years.

Park Hyung Sik then speaks about his character Jung Yi Hyun, who is a police detective in the violent crimes division. Jo Woo Jin stars as Han Tae Suk, the man in the Armed Forces Medical Command in charge of finding the cause of a national crisis. He explains, “In a way, he is a mysterious figure who has the key to the case.”

Next, Han Hyo Joo and Park Hyung Sik start dancing and get playful while they shoot their posters as a pair. When Han Hyo Joo’s hair gets disheveled from the wind, she swings her head back and forth to fix it, and that makes Park Hyung Sik laugh.

They go indoors for a different poster concept, and Park Hyung Sik comments that they look like they’re shooting album jacket photos. Han Hyo Joo adds that it looks like an album from the ’90s, and they pose together in that style. 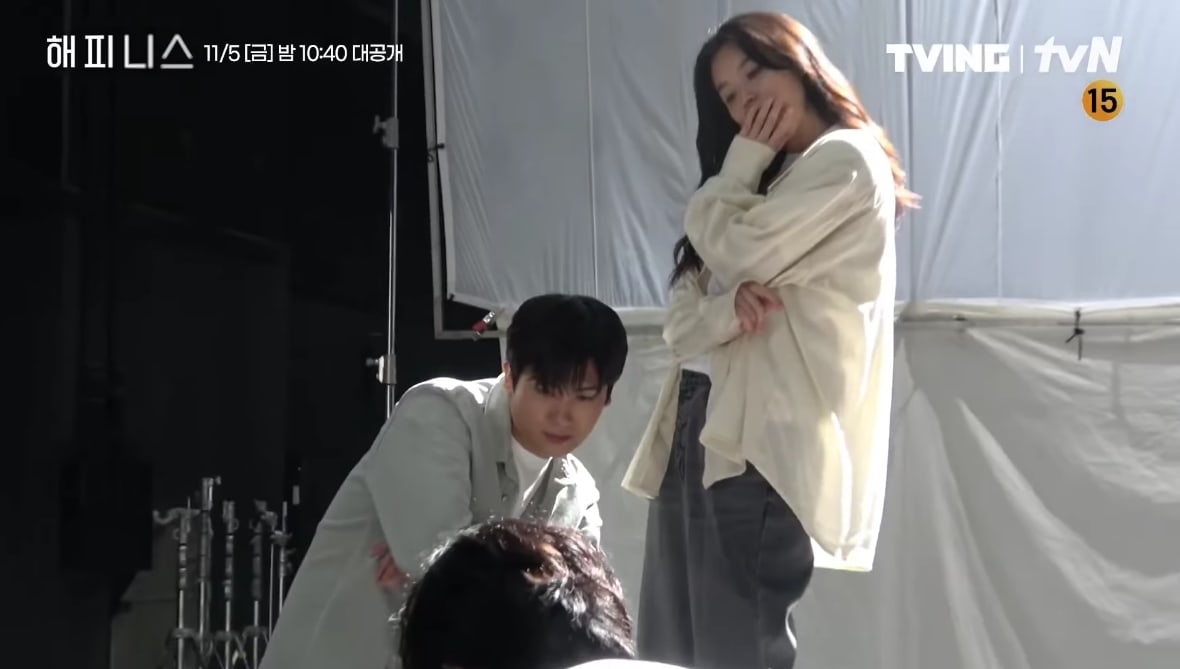 One of the concepts involves the pair pretending they’re looking down at something. The director tells Han Hyo Joo to stand straight instead of stooping down, and Park Hyung Sik jokingly exclaims, “Please straighten your back!” Han Hyo Joo laughs embarrassedly and apologizes with an explanation that she was looking at the object below them too carefully.

Finally, they shoot in a set that looks like an apartment building, and Park Hyung Sik makes Han Hyo Joo burst into laughter with his exaggerated acting.

Han Hyo Joo asks viewers to anticipate and show lots of love for “Happiness,” and Park Hyung Sik shares that they are working hard to film the drama. Jo Woo Jin comments, “By the time this drama airs, I hope that the pandemic will no longer be with us. I believe this drama will be one that delivers encouragement to all of the people who are enduring the pandemic. I hope that this drama will make you rejoice and cry with us. Please stay healthy.” Park Hyung Sik adds, “Always be happy. I love you.”

“Happiness” premieres on November 5 at 10:40 p.m. KST and will be available on Viki.

In the meantime, watch Park Hyung Sik in “Juror 8“: