Gaon has revealed its chart rankings for the week of October 24 to October 30. 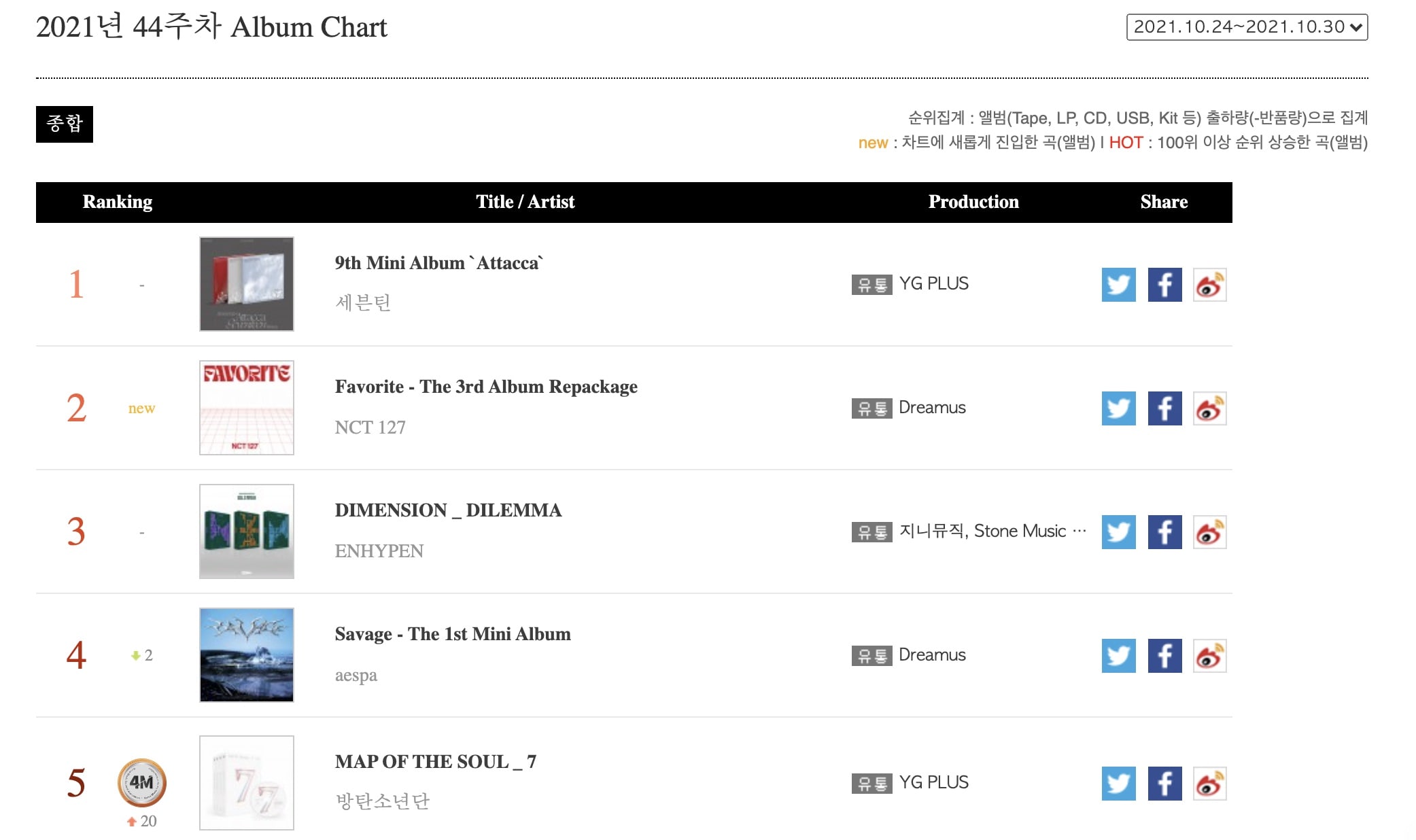 SEVENTEEN held on to the No. 1 spot on Gaon’s album chart for the second week in a row with their ninth mini album, “Attacca.” NCT 127’s repackaged third album, “Favorite,” debuted on this week’s chart at No. 2, while ENHYPEN’s “DIMENSION: DILEMMA” held on to its No. 3 spot from last week. aespa’s “Savage” dropped two places to No. 4, while BTS’s 2020 album “Map of the Soul: 7” rose up the rankings to round out the top five. 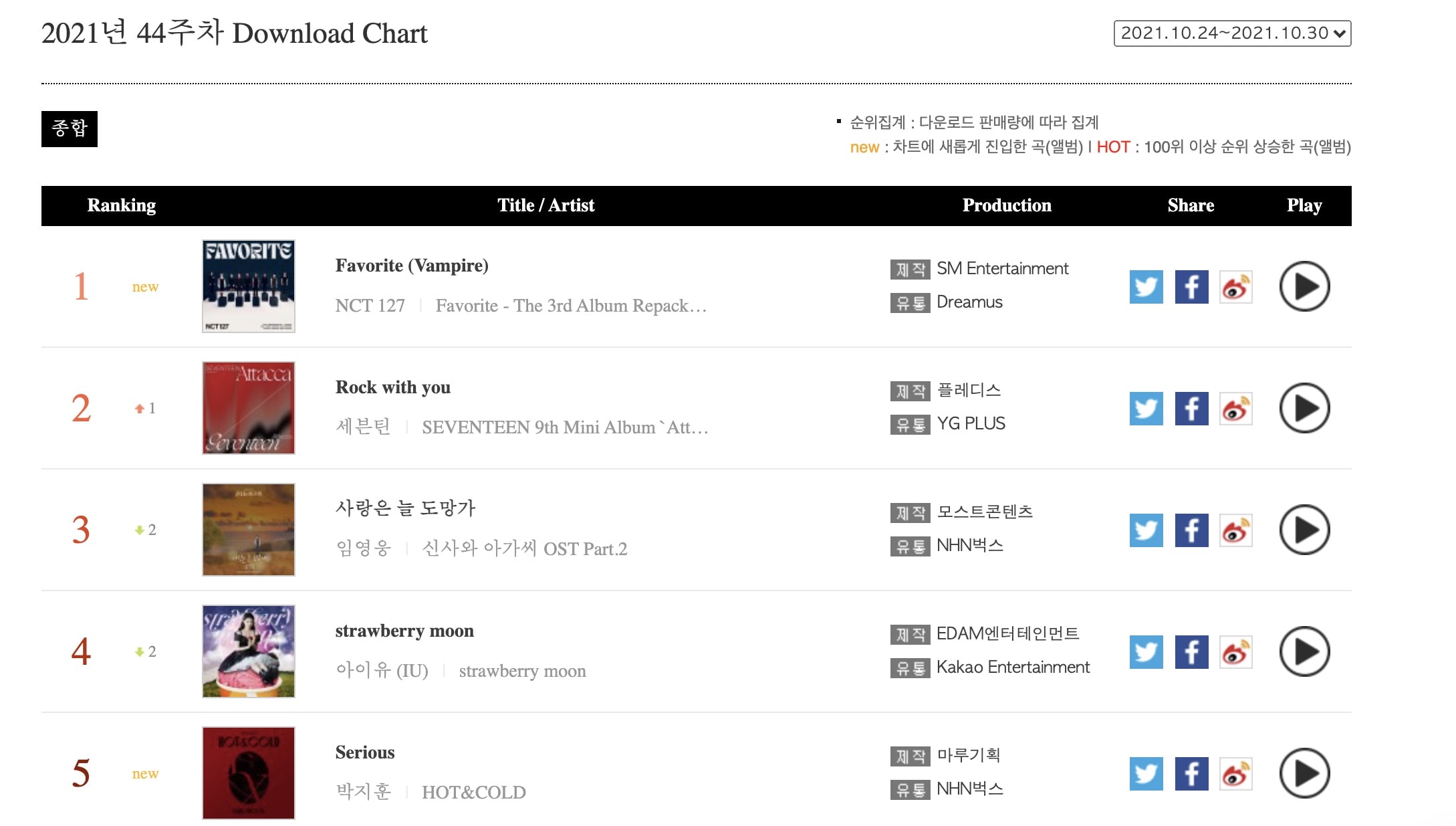 NCT 127’s new title track “Favorite (Vampire)” debuted on this week’s download chart at No. 1. SEVENTEEN’s “Rock with you” followed at No. 2, rising one ranking from last week, while Lim Young Woong’s “Young Lady and Gentleman” OST “Love Always Run Away” dropped two places to No. 3. IU’s “strawberry moon” also dropped two places to No. 4, while Park Ji Hoon’s new track “Serious” debuted at No. 5. 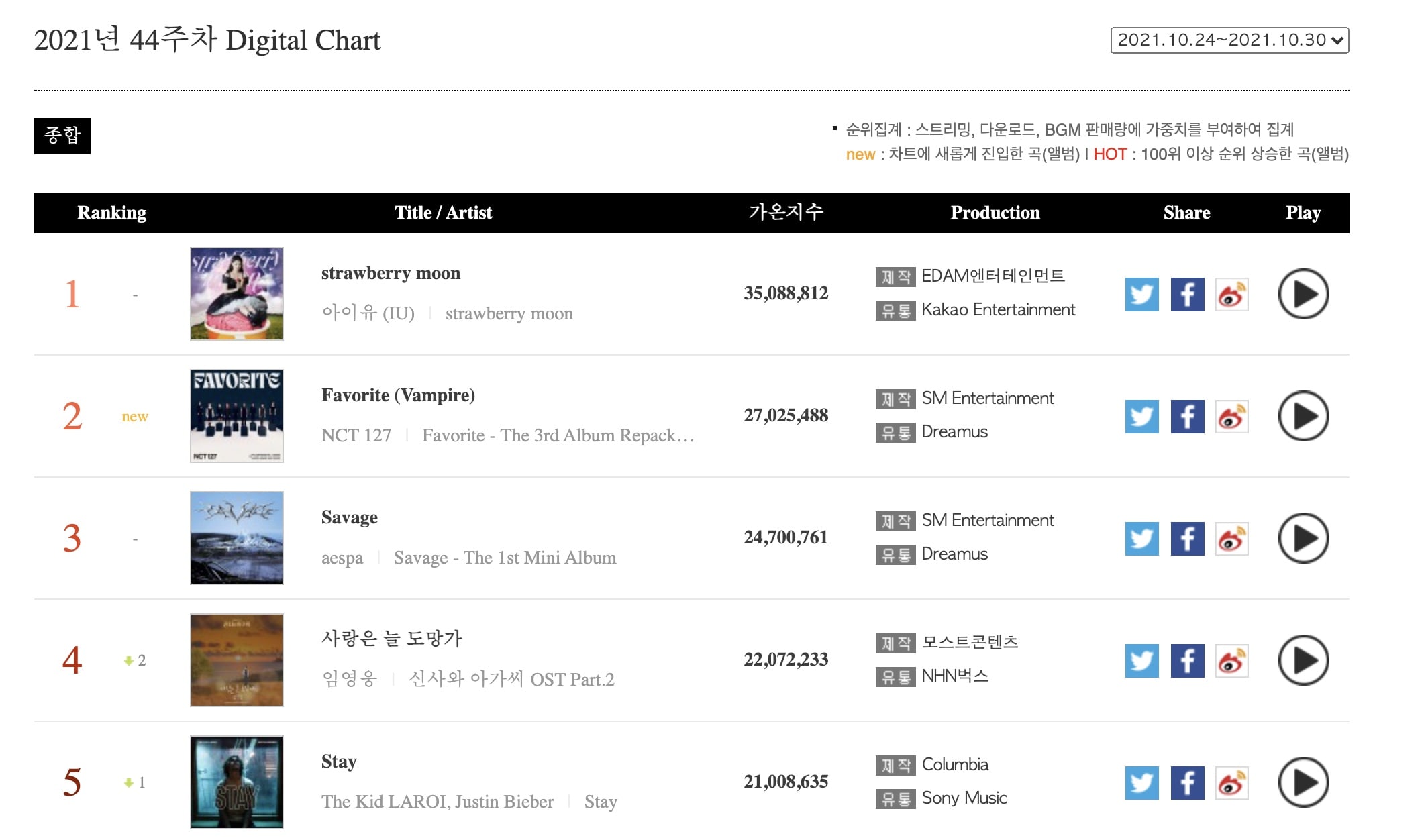 IU’s “strawberry moon” reigned over the digital chart for the second consecutive week, followed by NCT 127’s “Favorite (Vampire)” at No. 2. aespa’s “Savage,” Lim Young Woong’s “Love Always Run Away,” and The Kid LAROI and Justin Bieber’s “Stay” maintained their spots in the top five, though “Love Always Run Away” and “Stay” dropped a few places in the ranks. 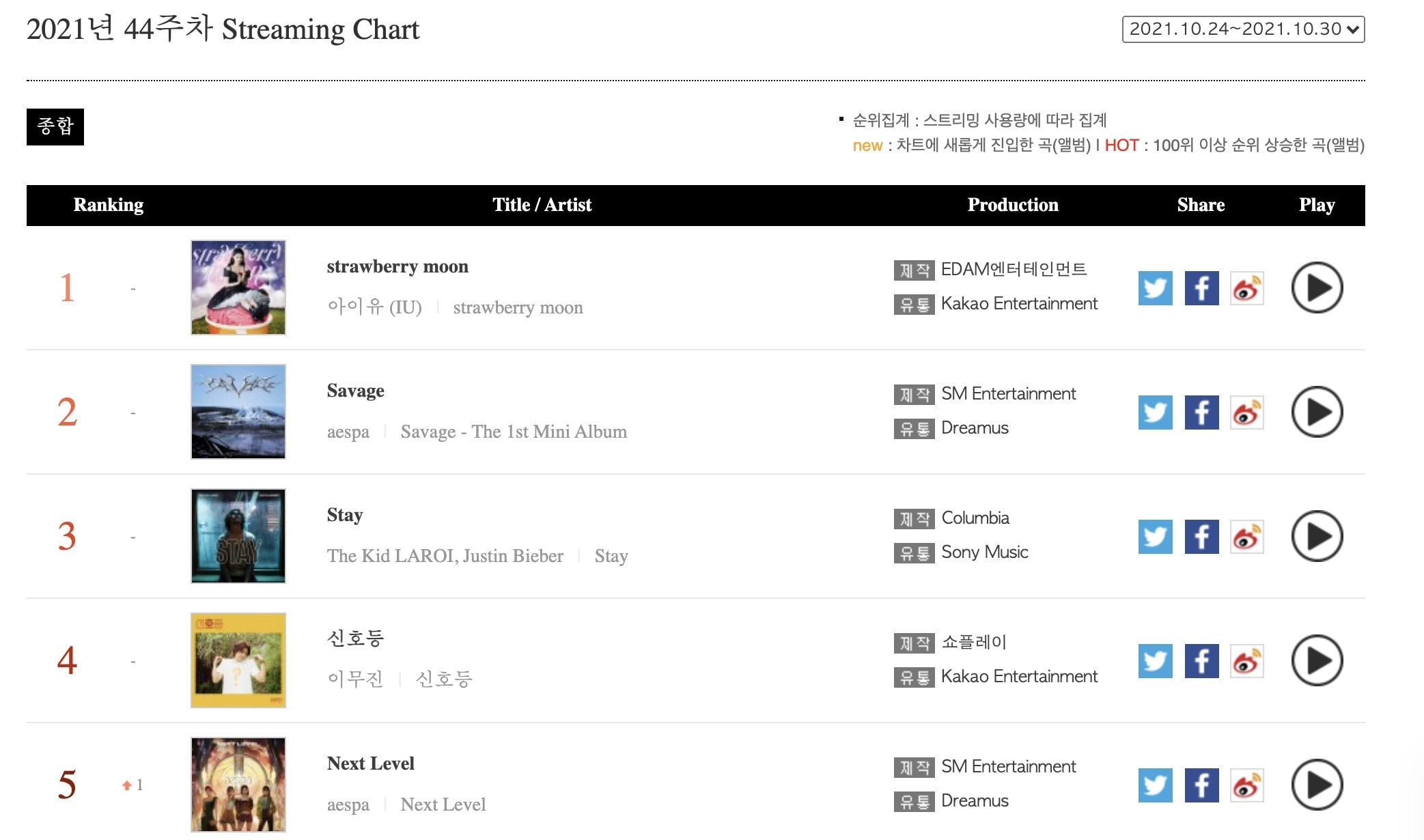 The streaming chart for the week of October 24 to 30 looks much the same as last week’s chart, with “strawberry moon,” “Savage,” “Stay,” and Lee Mujin’s “Traffic light” maintaining their positions at No. 1 to No. 4. aespa’s “Next Level” rose one ranking to No. 5, giving aespa two entries in the top five on this chart. 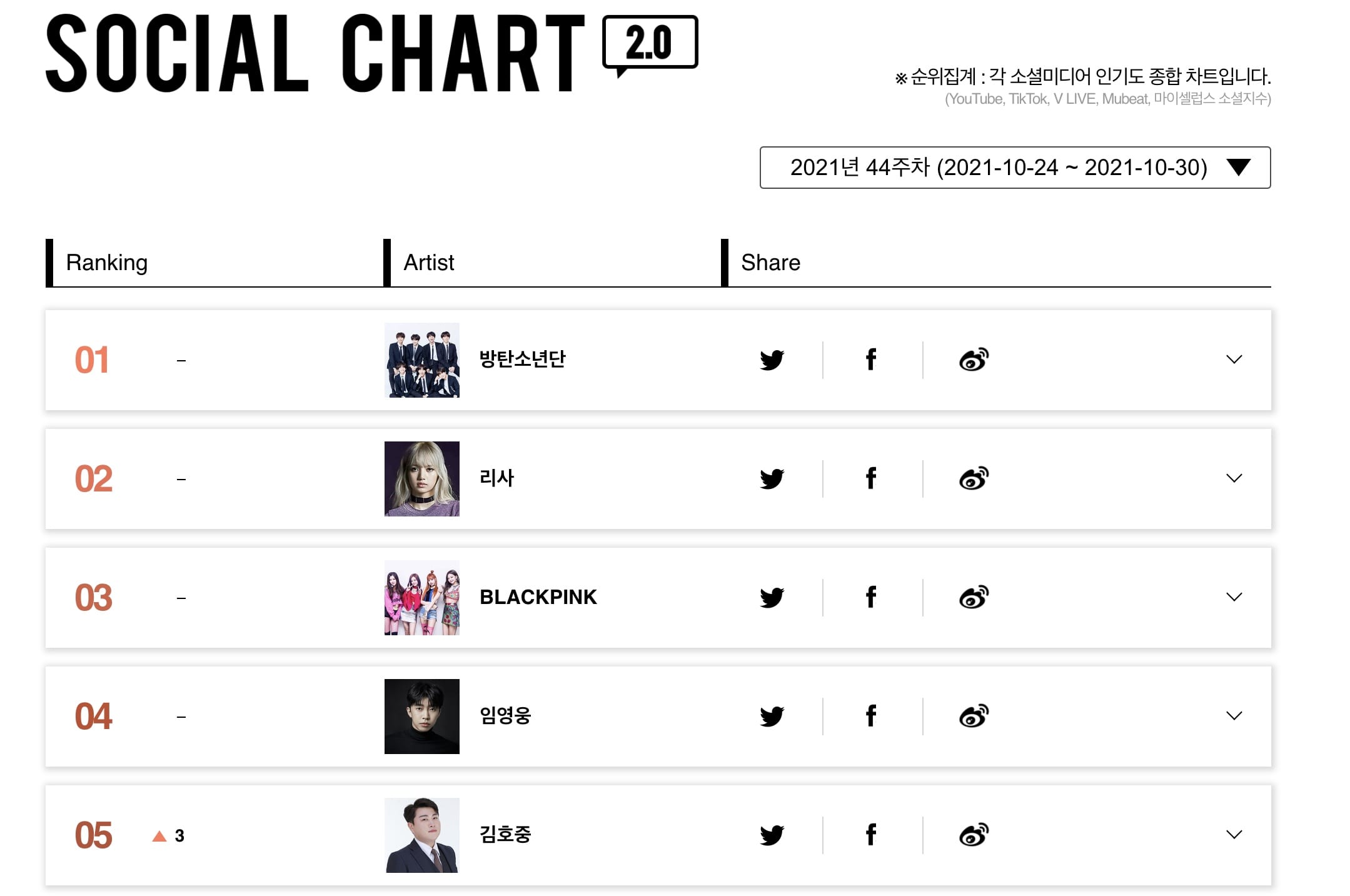 The Social Chart 2.0 for this week is also similar to last week’s, with BTS at No. 1, BLACKPINK’s Lisa at No. 2, BLACKPINK at No. 3, and trot singer Lim Young Woong at No. 4. Fellow trot singer Kim Ho Joong rose three places to round out the top five this week.

IU
BTS
SEVENTEEN
NCT 127
How does this article make you feel?