Park Eun Bin is surrounded by guardian angels in “The King’s Affection”!

Based on the manhwa (Korean comic) of the same name, “The King’s Affection” tells the story of a pair of royal twins, one male and one female. Although the sister is initially abandoned for being female, she is later forced to disguise herself as a man to become the crown prince when her brother dies. Park Eun Bin stars in the drama as Lee Hwi, the crown prince with a shocking secret, while SF9‘s Rowoon stars as Jung Ji Woon, who becomes Lee Hwi’s teacher.

Lee Hwi – or rather, Lee Dam Yi – may be stuck in an unfortunate situation where she has to pretend to be someone else for the rest of her life. Fortunately, she has been blessed with four devoted people who will protect her no matter what.

First of all, there is Lee Hyun, the reliable friend, who protects Lee Hwi with his position and competence. At first, he pitied Lee Hwi, but then, he started to fall in love with her. However, he never reveals his feelings in fear that she will be burdened. For example, in the previous episode when he held an umbrella over her as she shed heartbroken tears, he pushed down his swelling desire to embrace her and just calmly comforted her with meaningful words. Now that the considerate Lee Hyun has learned the truth of Lee Hwi and Jung Ji Woon being each other’s first love, how much longer will he be able to hide his feelings?

The mysterious and taciturn Kim Ga On has protected Lee Hwi under any circumstances. Even when she was lost in her thoughts, he would silently stay by her side. One thing they have in common is that they’re both hiding deep secrets. Previously, it was revealed that Kim Ga On is actually the son of King Hyejong’s (Lee Pil Mo‘s) teacher, who was falsely accused and beheaded. Kim Ga On had attempted to kill Lee Hwi before, but viewers are still hanging onto hope that he will stay as her loyal subject. 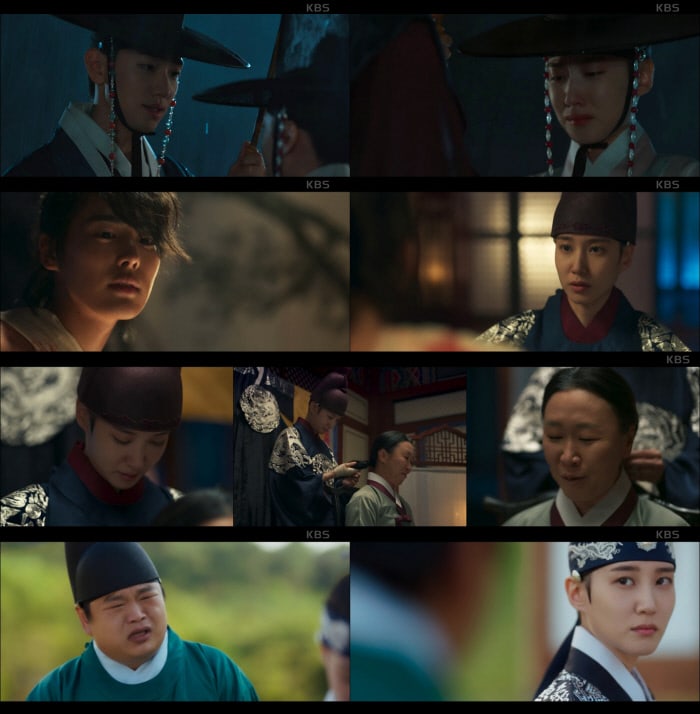 Court Lady Kim is Lee Hwi’s closest aide. She’s a mother-like figure who knows all the secrets about her since her birth. This is the reason why Lee Hwi couldn’t hold back her anger when the chief eunuch (Park Ki Woong) from Qing cut the court lady’s hair off. Despite suffering from such embarrassing disgrace, Court Lady Kim put on a bright smile, and Lee Hwi couldn’t hold back her tears as she brushed her hair.

Lee Hwi’s other close aide is none other than Eunuch Hong, who also knows her true identity. With his honest reactions and hilarious comments, he never fails to make the viewers laugh. In particular, he is excellent at empathizing with her emotions. In one episode, Lee Hwi gave Jung Ji Woon a hug in broad daylight, and Eunuch Hong was shocked why she could comply with such a ridiculous request. When Lee Hwi sadly admitted it was because she likes him, he couldn’t say anything else, and he was more concerned about her broken heart than her duty as the crown prince. Viewers are looking forward to more moments of their teamwork as Eunuch Hong is the only one who can represent Lee Hwi’s true feelings.

Who is your favorite guardian angel in the drama?

In the meantime, watch Nam Yoon Su in “Beyond Evil“: