The cast of SBS’s “Master in the House” put their dancing skills to the test by teaming up with the dance crews of “Street Woman Fighter”!

On November 14, “Master in the House” aired the second installment of its “Street Woman Fighter” special, which featured Hook’s Aiki and Rageon, La Chica’s Gabee and Rian, Prowdmon’s Monika and Lip J, and YGX’s Leejung Lee and Yeojin as the show’s latest masters.

The episode began by revealing the results of a survey about the four dance crew leaders who were appearing on the show. The first question asked the eight dancers to vote for the sexiest leader, without taking their dance skills into consideration. Gabee took first place with four votes, while Aiki came in second with three votes.

The next question asked the dancers to vote for the leader whom they wouldn’t want as their dance crew leader. The terrified dancers immediately began exclaiming that they didn’t realize their votes would be made public, but Lee Seung Gi soon revealed that the vote had been unanimous: everyone had voted for Monika—including Monika herself!—with the exception of Lip J, who had chosen to abstain. 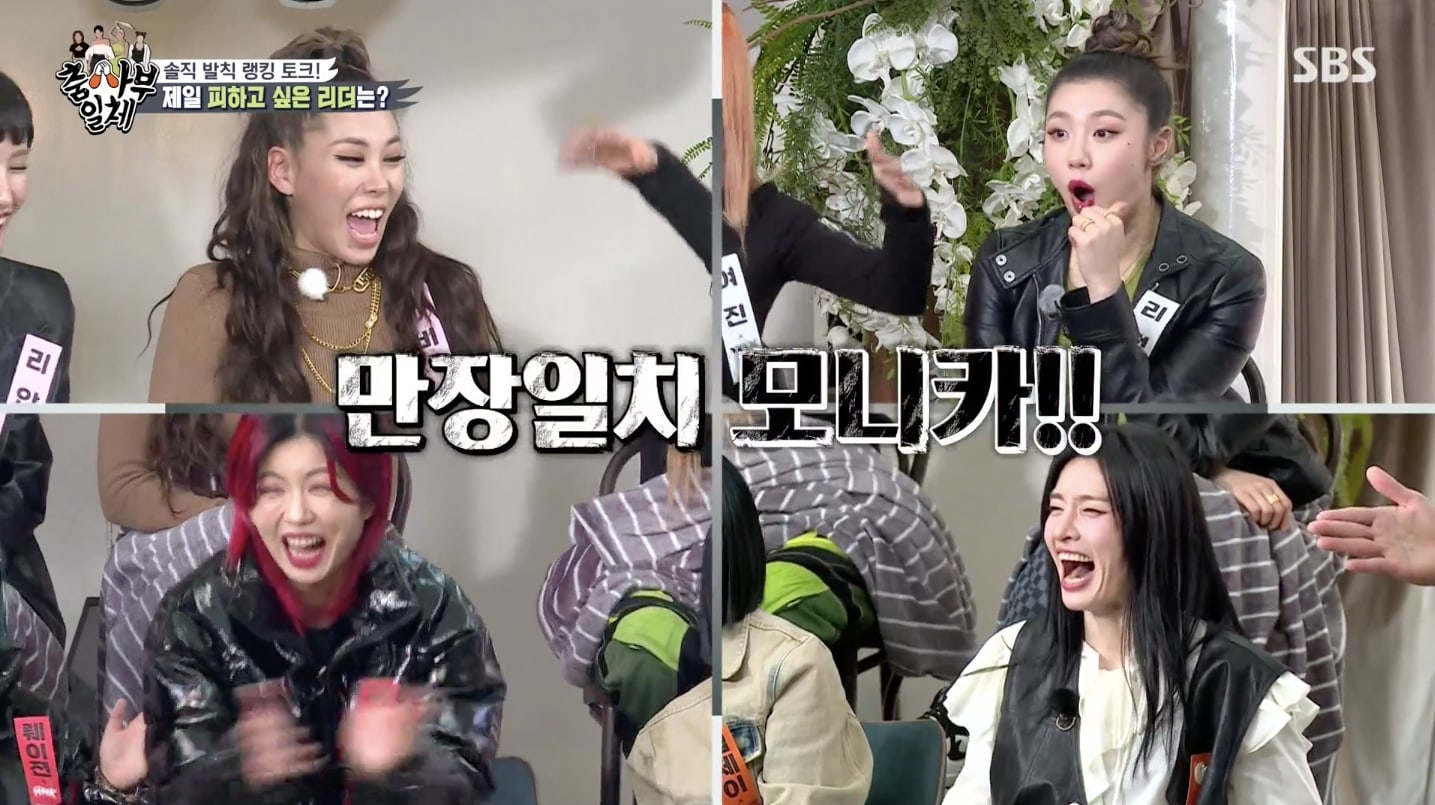 Finally, the dancers were asked to vote for the leader they thought was the best dancer. Aiki and Leejung tied for first place with three votes each, though Leejung shyly revealed afterwards that she had voted for herself.

In order to break the tie, Aiki and Leejung faced off in an unusual dance battle that required them to showcase their creativity. Instead of the typical music, the two leaders had to dance to the theme song for SBS’s investigative journalism program “Unanswered Questions” and Pinkfong’s “Baby Shark.” When the other dancers were also invited to show off their own moves, both Lip J and Gabee let loose to “Baby Shark” as well.

Afterwards, the dance crews went head-to-head in a “new member” battle, in which each of the crews selected one of the “Master in the House” cast members to incorporate into their performance for that day. The dancers also served as judges for the battle, scoring each of the other teams on two criteria: first, how well the members had conveyed the message of their performance, and second, how well the crews had made use of the members.

Lee Seung Gi, who was previously voted the worst dancer among the “Master in the House” members last week, joined Hook for a reprise of their “It’s Raining Men” performance from “Street Woman Fighter”—and everyone was impressed by how much he had improved in a matter of hours.

Meanwhile, Kim Dong Hyun joined YGX for their performance set to BoA‘s “Eat You Up” and “Better.”

Prowdmon, who chose Yoo Su Bin as their new member, was the only crew to put on a performance that hadn’t been seen on “Street Woman Fighter.”

Finally, Yang Se Hyung joined La Chica for their memorable “Born This Way” performance, and the other crews’ dancers expressed amazement at how he’d managed to learn the complicated moves in just a few hours.

Once the scores had been tallied, Yang Se Hyung and La Chica ultimately emerged the winner of the competition, with Lee Seung Gi and Hook coming in second place.

Which of the performances was your personal favorite? Let us know in the comments below!