“Happiness” grows even darker this week as Seyang Forest Le Ciel Building 101’s residents start going down the path of insanity. Everyone’s irrational this week as a shortage of basic necessities, a toxic boiling pot of an environment, and ulterior agendas galore combine to turn the complex into a free-for-all. As it turns out, the infectees are the least of everyone’s problems.

It’s been obvious from the beginning that Yoon Sae Bom (Han Hyo Joo) has something special in her blood. She was one the first people scratched but hasn’t turned at all – a fact that she seems to have strangely forgotten because she doesn’t seem all that concerned that she hasn’t shown symptoms.

Sae Bom and Yi Hyun’s (Park Hyung Sik) irrational dislike of Han Tae Seok (Jo Woo Jin) continues, and the man really isn’t helping matters here when he practically kidnaps her to get a blood sample. Tae Seok, dude, if you need a blood sample, just ask? There’s no need to sic an infectee on her.

The show doesn’t really explain his logic in doing so but appears to be using the scene to argue that Tae Seok is ruthless. But now that the Sae Bom CureTM is in production, a return to normal seems to be on the horizon. But the residents don’t know that.

2. The cleaner couple turns on everyone

The cleaner couple in apartment 201 has had enough. They politely request that they be allowed to move to 1102 because, with the first floor now breached, their apartment is the first possible place an infectee would stop for a snack. Oh Yeon Ok (Bae Hae Sun) manages to inject her refusal with enough classism to infuriate the couple, especially when the rest of the residents, save Sae Bom and Yi Hyun, join in.

One half of the elderly couple in apartment 302, Kim Hak Je (Hong Soon Chang), is especially egregious, saying that the young should put themselves on the line for the elderly (a strange sentiment from someone seeing the end of their days), and the couple has had enough. When Yeon Ok has the gall to ask them to share the supplies they risked their life to obtain from the supermarket, the couple draws the line and starts a hefty markup. A bottle of soda starts at $200 now. Yikes. Gone is any shred of camaraderie. It’s everyone for themselves.

Yeon Ok’s scheme is finally out. She’s been gunning to become apartment representative so that she can embezzle the other residents’ management fees. Sae Bom and Yi Hyun call her out on it, and Yeon Ok’s genteel, haughty lady act vanishes instantly. Perhaps that wasn’t the smartest thing for our power couple to do because she immediately goes on the warpath to eliminate the only threat to her money. And she has just the person to do it.

Kim Jung Kook (Lee Joon Hyuk) has been antsy about the lockdown and being separated from his wife, but not knowing when it’ll end drives him off the deep end. Heaven knows what he thinks he witnesses Yeon Ok’s husband do, but he starts believing that the pastor has divine powers. Within two days, Yeon Ok and her husband have him in the palm of their hands. So when they order him to do “God’s duty” and hunt down the infected, Jung Kook turns on his former friends immediately.

4. Oh Joo Hyeong is a psychopath 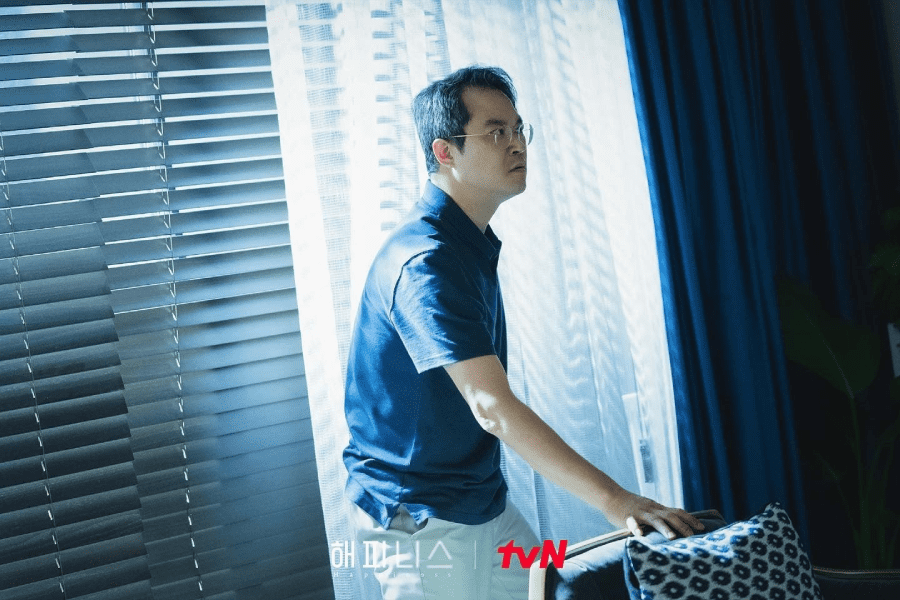 Oh Joo Hyeong (Baek Hyun Jin) is probably the smartest character in this show next to Tae Seok. This slippery eel knows just how to push people’s buttons, plant thoughts in their head, and walk away with a chuckle. His first thought upon realizing that the Next pill creates infectees is to inject all his bottled water with it. For what purpose? Surely it does him no good to have a bunch of infectees running around the building. But perhaps Joo Hyeong’s just a psychopath who loves chaos.

Thus, it’s hilarious when Yi Hyun informs him that he knew Joo Hyeong would get up to something unsavory and swapped out all the pills for digestive medicine.

Plus, now they have video evidence of Joo Hyeong gleefully searching for the pills, knowing what they are capable of doing.

5. Tae Seok is a diabolical king 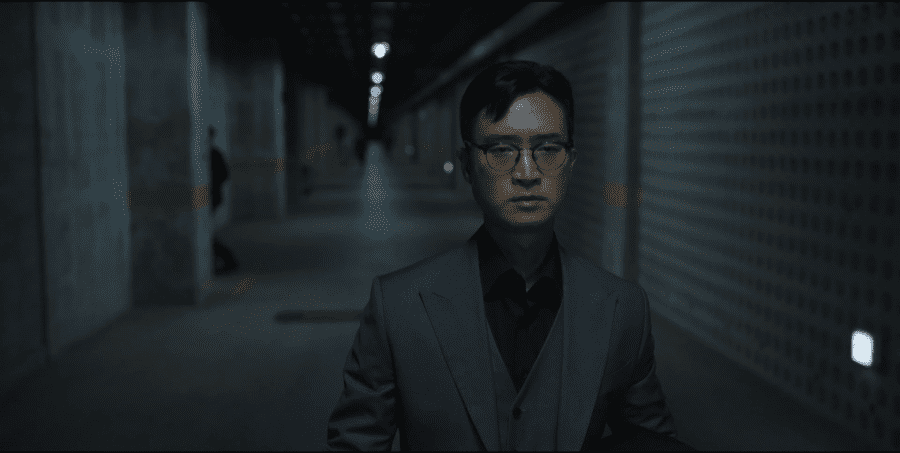 Sae Beom and Yi Hyun’s dislike of Tae Seok is definitely starting to grate. The man is ruthless, no doubt, and has enough blood on his hands to fill a river at the rate he’s going. But his actions make a painful kind of sense. This is a crisis, and he’s acting to save as many as he can. Naturally, this means that some people will die or be sacrificed, but he isn’t getting any pleasure out of it (unless it’s rich people – he really hates the rich, and rightfully so).

Sae Bom and Yi Hyun get on their high horse about him killing infectees, but Tae Seok actually lied to the higher-ups about the possibility of a cure back when one didn’t exist so he could save infectees. Or, as he noted, the government would have ordered all infectees to be shot on sight. Nevertheless, Tae Seok wants people to beware of infectees because they are dangerous.

Na Hyun Kyung’s actions proved that much. She was crazy enough to let Kim Seung Beom (Joo Jong Hyuk) loose despite having seen a video of him having turned. If she hadn’t let him free, Seung Beom wouldn’t have died. So it’s hilarious that Sae Beom immediately comforts Hyun Kyung (the source of the problem) and is rude to Tae Seok who just saved her and Yi Hyun. The fact that infectees can turn back to normal for brief spells can fool people into thinking they’re harmless. Taking pity on them can result in people dying. Tae Seok doesn’t take pleasure in killing; he’s doing what has to be done. Sae Beom, on the other hand, still lives in unicorn land where everyone can be saved and all infectees are good people who only need to be restrained. And that compassionate but naïve approach has consistently created a lot of problems.

Sae Beom and Yi Hyun are the sort who would announce to the world that she could be the cure in a bid to get everyone to calm down. Tae Seok is the only one who understands that she’d be killed in five seconds and drained of blood to manufacture the cure. So he’s keeping it low, finding more test subjects by leaking fake news and laughing as the wealthy and powerful inject themselves with failed cures. Good for him. 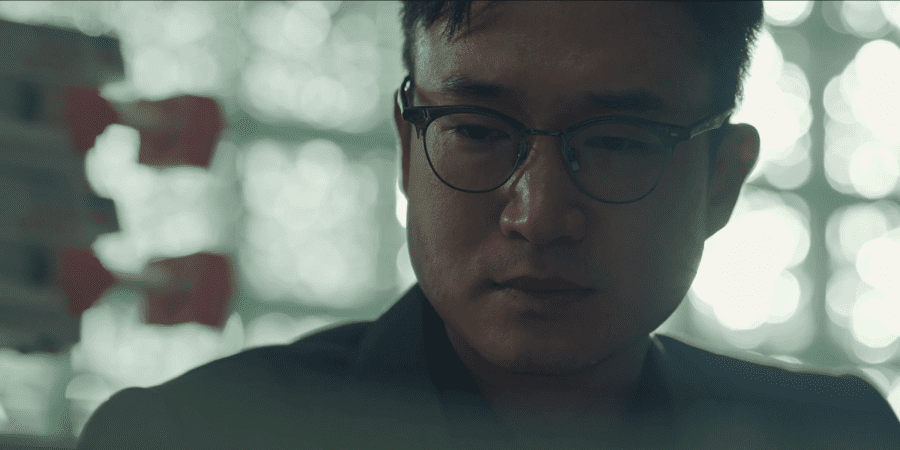 He’s currently the most nuanced and consistent character in this show. We could do with more of Tae Seok. And more of that energy between Yi Hyun and Sae Beom before Yeon Ok interrupted his confession. She deserves to be bitten for that alone.

Next week shows everyone turning on everyone for the hundredth time. Sae Beom and Yi Hyun are put into isolation by the looks of it. Loud banging at night indicates that one of the residents is hiding that they’re infected, but who? Andrew (Lee Joo Seung) remains an enigma, and the survivalist in apartment 1501 remains suspicious. Tae Seok indicates that there’s light at the end of the tunnel, but just who will survive to see it?