“Bulgasal” is a fantasy drama about a woman who has experienced many reincarnations over the past 600 years while remembering all her past lives and a man who is immortal and has lived for over 600 years as a bulgasal, a mythical creature that feeds on human blood.

Lee Jin Wook stars as the bulgasal named Dan Hwal, and Kwon Nara plays Min Sang Woon, the woman who keeps getting reincarnated while fleeing from the bulgasal that is pursuing her. Lee Joon takes the role of Ok Eul Tae, a refreshing and energetic person with a good personality, whereas Gong Seung Yeon stars as Dan Sol, Dan Hwal’s wife 600 years ago. Jung Jin Young stars as Dan Geuk, who is Dan Sol’s father, and Park Myung Shin plays Munyeo (a female shaman), who lived 600 years ago. UP10TION’s Kim Woo Seok takes the role of Nam Do Yoon, who doesn’t feel overpowered by the bulgasal and follows him around like he’s an older brother.

The newly released poster features the seven characters who has been intertwined for 600 years. In particular, they all experience different flows of time. Some are from the past, others are reincarnated, and one has been living alone for a long time.

Dan Hwal’s expressions are shadowed with unknown emotions. Despite the fact that he’s been living as a vengeful creature who feeds on human blood, his gaze is filled with sadness. Min Sang Woon looks in a different direction than him with hurt eyes.

Ok Eul Tae is a tremendously wealthy man and powerful supporter of politicians, but his identity is still a mystery. His eyes are cold without emotions, doubling the tension. On the other hand, Dan Sol has abilities that others cannot understand, and she stares sorrowfully into the distance while wearing graceful hanbok (traditional Korean clothing).

Dan Geuk exudes solemn charisma with his sword and armor, and Munyeo creates a strange atmosphere with her cryptic appearance. Nam Do Yoon, who usually wears a bright smile on his face, gazes downward with a serious expression, piquing curiosity about his backstory.

The text on the poster reads, “Bulgasal that can neither be killed nor die.” Fans can look forward to an intriguing story of seven completely different characters whose fates have been intertwined for the past 600 years. What kind of conflicts will occur when they meet each other? 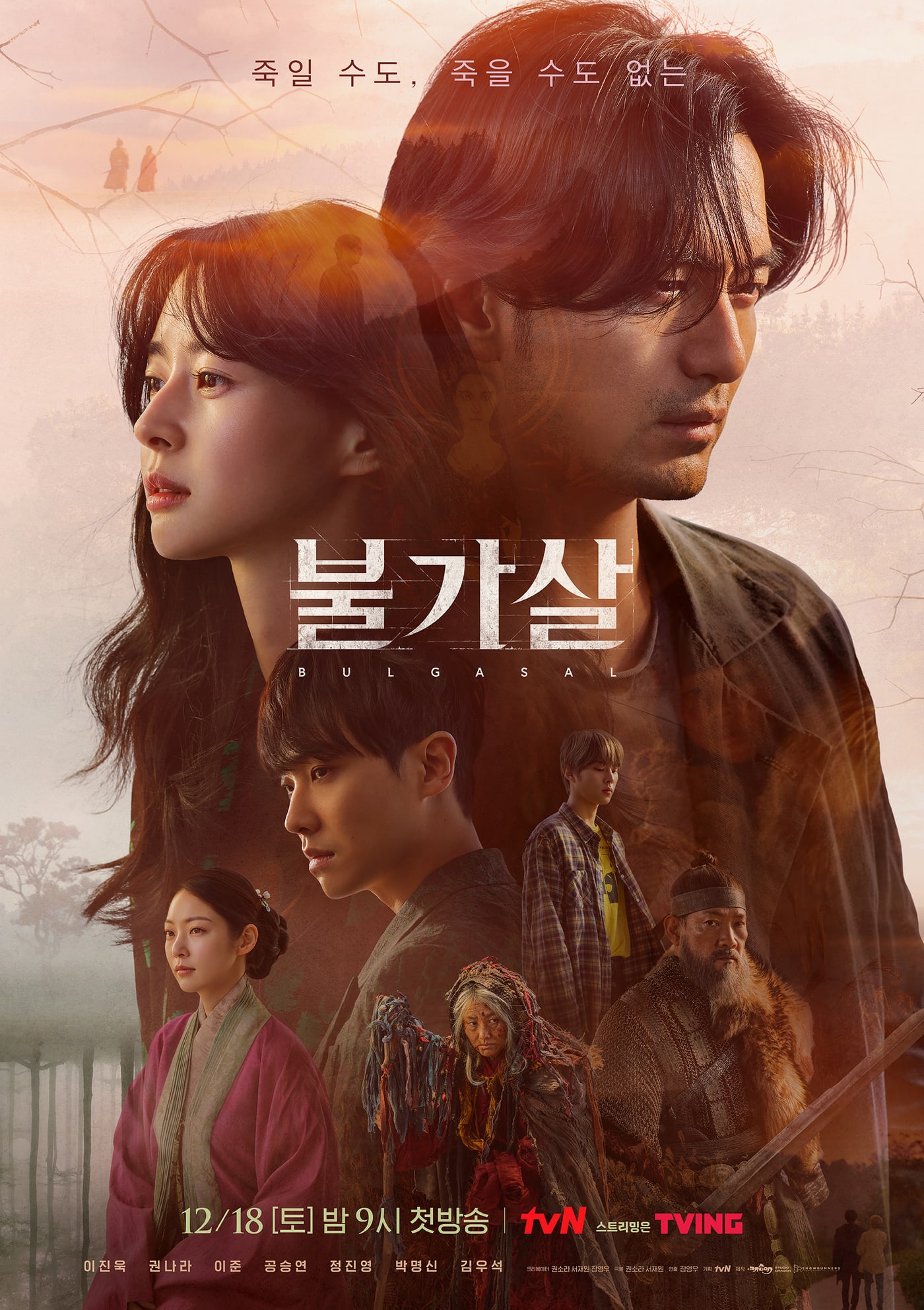 “Bulgasal” will premiere on December 18 at 9 p.m. KST following the conclusion of “Jirisan.” Check out a teaser here!

In the meantime, watch Kwon Nara in “Doctor Prisoner“: