SISTAR’s Bora and Honey J warmed hearts with their long-lasting friendship on the latest episode of “Knowing Bros” (“Ask Us Anything”)!

On November 20, the JTBC variety show aired the first installment of its “Street Woman Fighter” special, which featured the leaders of all eight dance crews from the popular Mnet competition program.

Early on in the episode, the “Knowing Bros” members brought up the fact that Honey J had once made a brief appearance on the show three years ago. Back when Bora was a guest in July 2018, Honey J was one of the backup dancers for a dance routine that the idol performed on the program, and Bora mentioned Honey J by name after their performance. 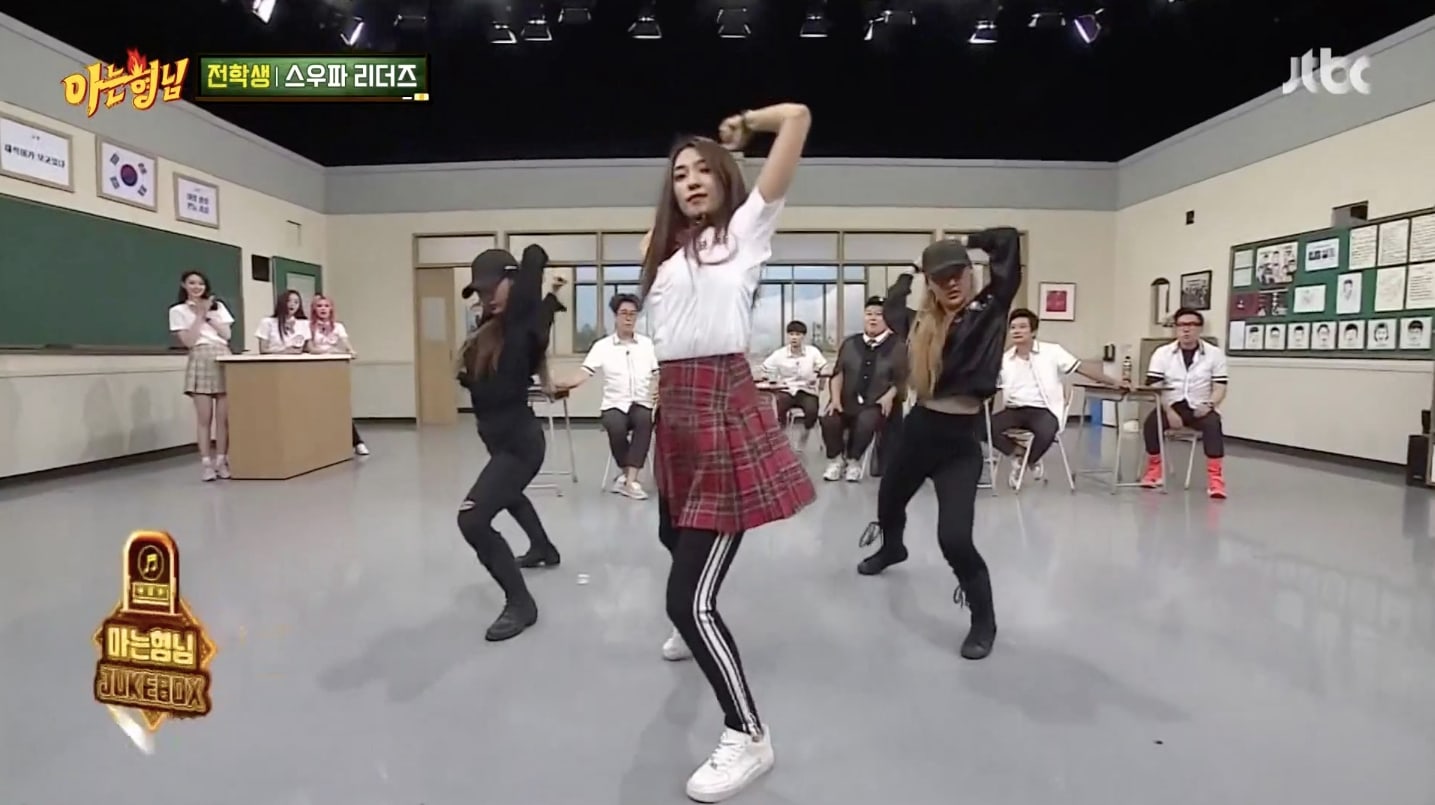 Kang Ho Dong asked how Bora was doing these days, saying he missed her, and Honey J replied, “I’ll send Bora a message for you. Bora, Ho Dong says he wants to see you!”

Suddenly, Bora exclaimed from off-camera, “I missed you too!” before shocking everyone by making a surprise appearance on set. As everyone expressed surprise at her unexpected arrival, Honey J called out, “Put on the music!” The two friends then immediately began dancing the same choreography (set to Rihanna’s “Rude Boy”) that they had danced on the show together three years ago.

Afterwards, Honey J revealed that Bora had insisted on wearing all black for her appearance, just like Honey J had done in 2018.

“Bora said she was going to wear black on purpose,” explained Honey J, “because I wore black clothing back then. So I told her, ‘No, don’t do that. Come wearing pretty clothes.’ But she still wore all black.” 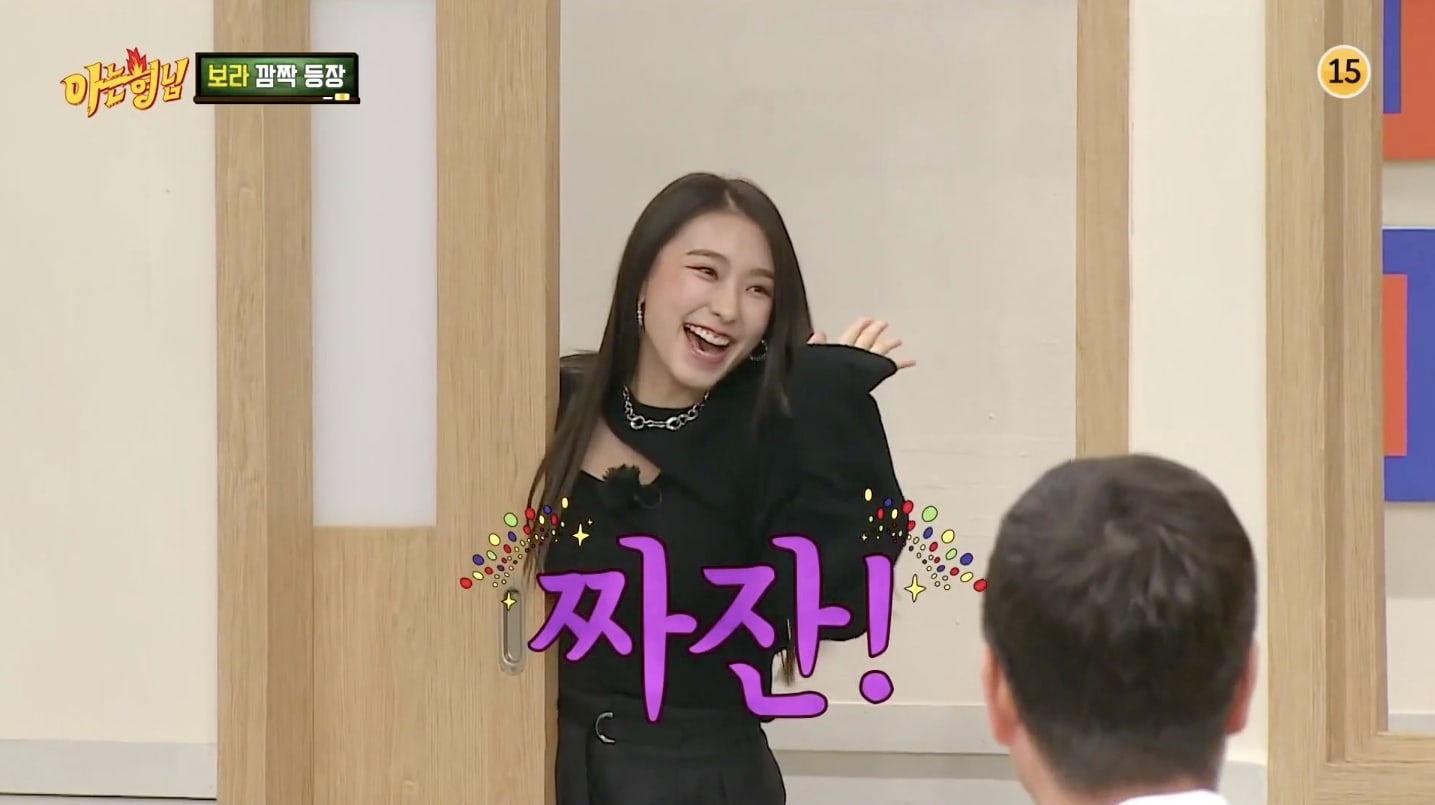 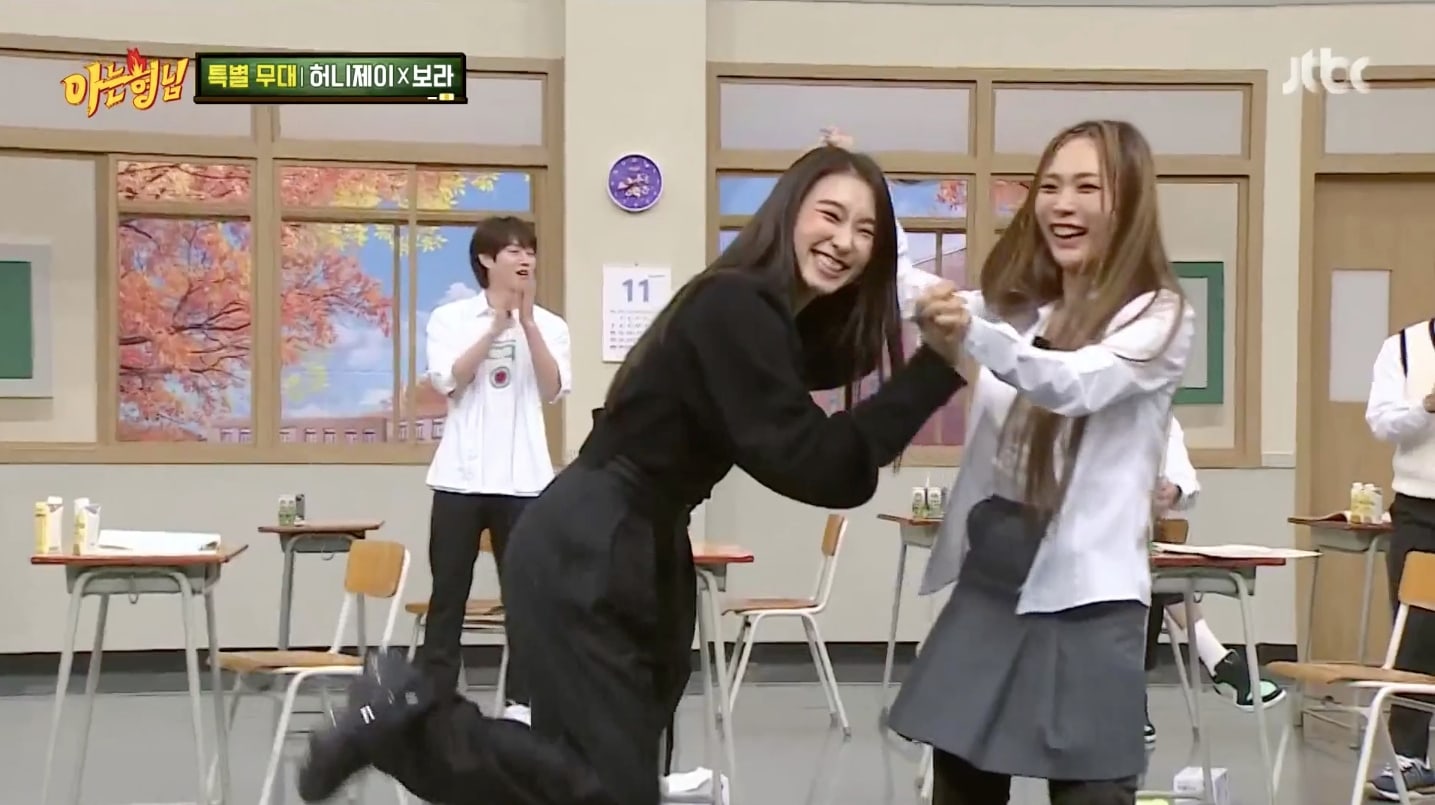 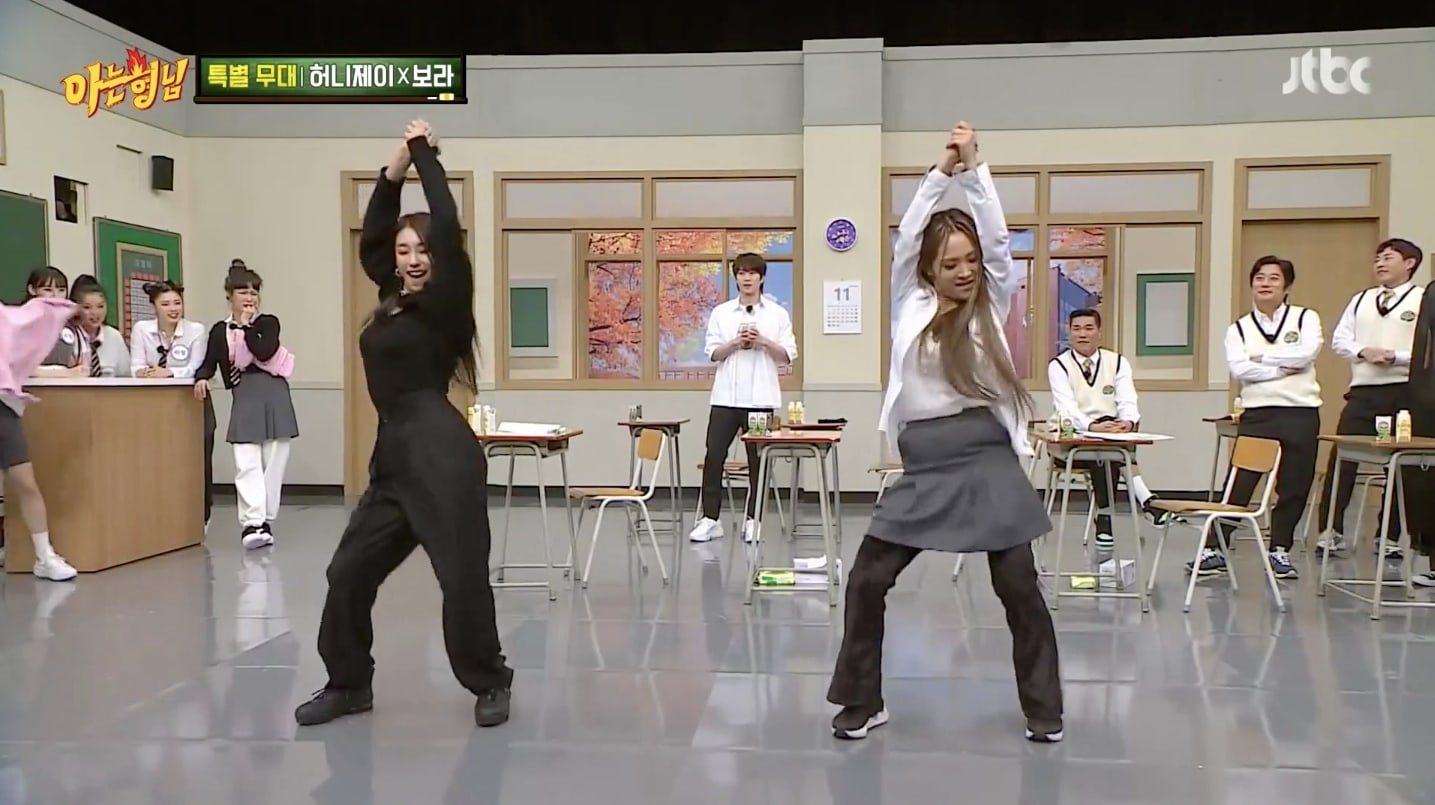 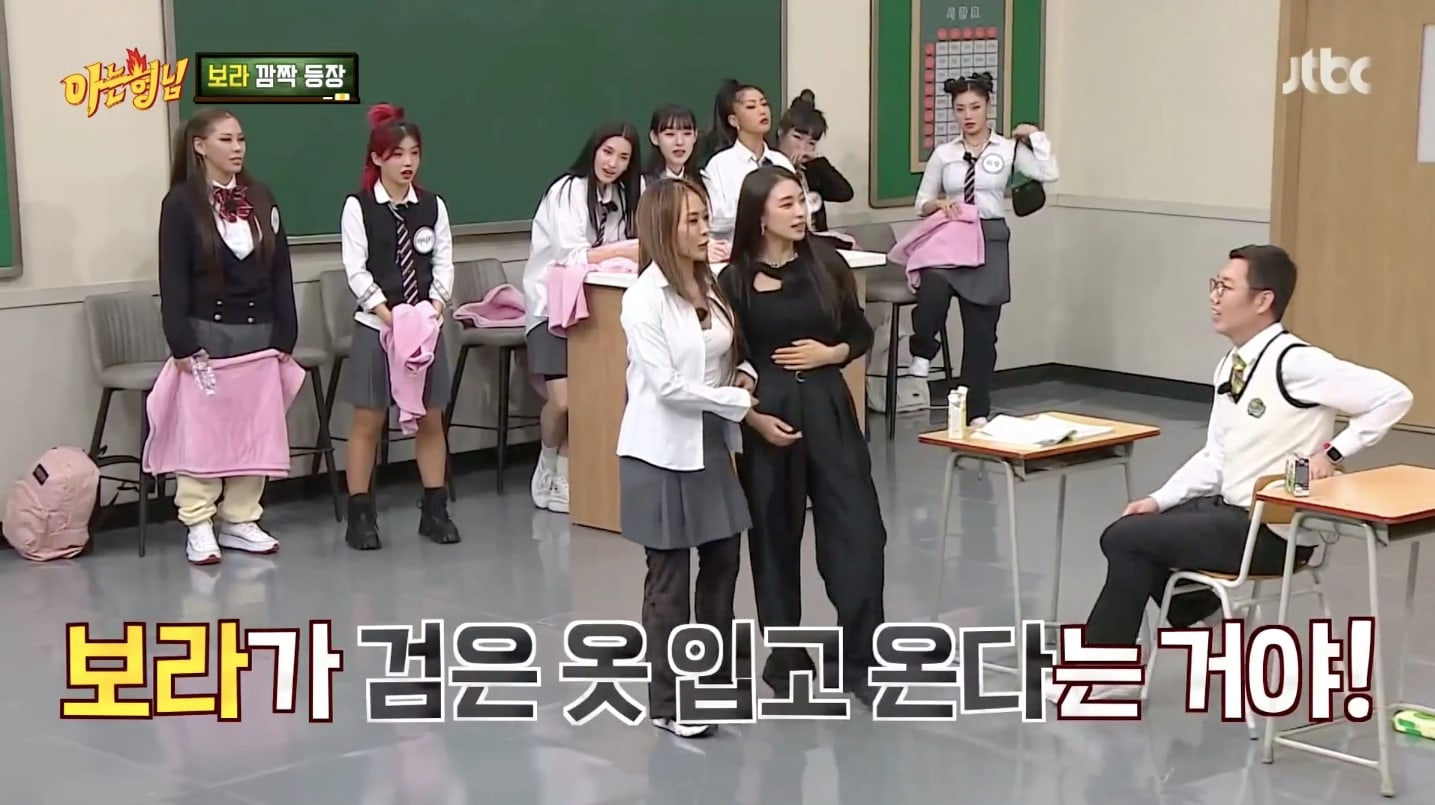 When asked if she had watched “Street Woman Fighter,” Bora replied, “Of course! Watching it made me really happy. Not only Honey J, but all the other dancers put on such amazing performances that it made me want to dance too. I think it’s been over a year since I danced last, but thanks to [Honey J], I was able to dance again today.”

Bora then said her goodbyes to everyone on set, explaining cheerfully, “Today is all about Honey J and the other dancers. I’ll come back another day.”

After the episode aired, Honey J posted a cute photo that she had snapped with Bora backstage, writing, “My loyal Bora, who made a surprise appearance to repay me for three years ago. Thank you, I’m sorry, and I love you.”

Check out the clip of Bora and Honey J dancing together on “Knowing Bros” three years ago below!

…and watch Bora in her drama “Cafe Midnight Season 2: Hip Up! Hit Up!” below!