12 Of The Coolest And Baddest Female Warriors In K-Dramas

There’s nothing like seeing a female lead in a K-drama who kicks some serious butt. There have been a fair share of actresses who have showcased their charisma through these types of roles, and it only makes us admire them even more. Some of the actresses even do their own stunts and trained vigorously for months in preparation for their respective roles. Here are 12 of the coolest and baddest female warriors in K-dramas. 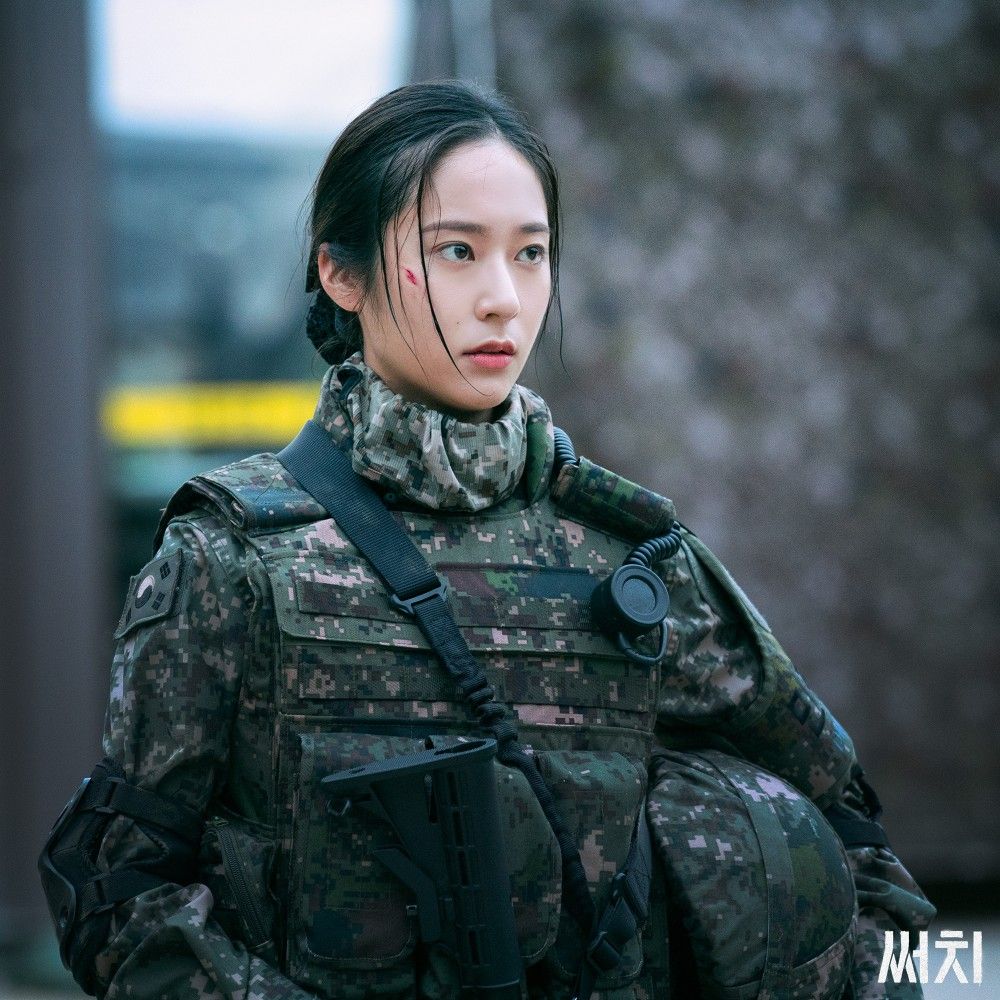 Krystal plays Son Ye Rim, a badass lieutenant who joins a special team that is trying to figure out the mystery of several disappearances and murders that have occurred at the DMZ (demilitarized zone). The series also stars Jang Dong Yoon as Yoon Dong Jin, a sergeant who also joins the team and who happened to have dated Son Ye Rim.

Seeing Krystal playing a character that she has never played before was so refreshingly appealing. She’s tough, strong, and ruthless in the series, with the charisma to draw anyone in. The way in which this K-pop idol can go from dancing on stage to physically taking down vicious creatures in this series is only a testament to how great of an actress she is. She can take on any role and nail it! 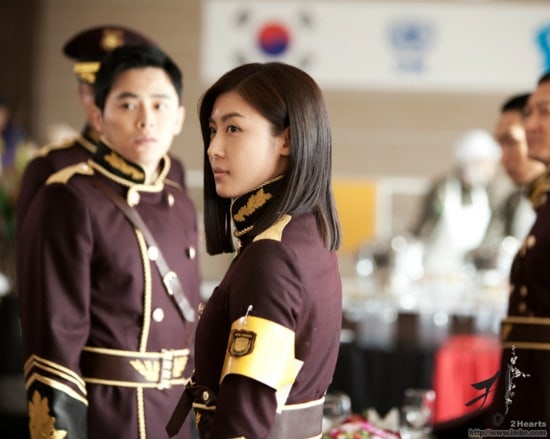 There’s nothing like an “enemy to lovers” storyline like “The King 2 Hearts” as it involves a North Korean woman and a South Korean man. Starring Lee Seung Gi as Prince Jae Ha and Ha Ji Won as a North Korean special forces agent Kim Hang Ah, the drama tells the story of how the two find themselves falling in love.

Ha Ji Won has had several K-dramas in which she showcased her action prowess. Ha Ji Won is easily one of those actresses mentioned when female action stars comes to mind. She’s got the charisma and intensity to deliver in these roles, and her portrayal in “The King 2 Hearts” is so awesome and so believable. She plays a special forces instructor who is lethal with her hands and doesn’t even break a sweat as she takes down the toughest of people throughout the series. That’s our Ha Ji Won! 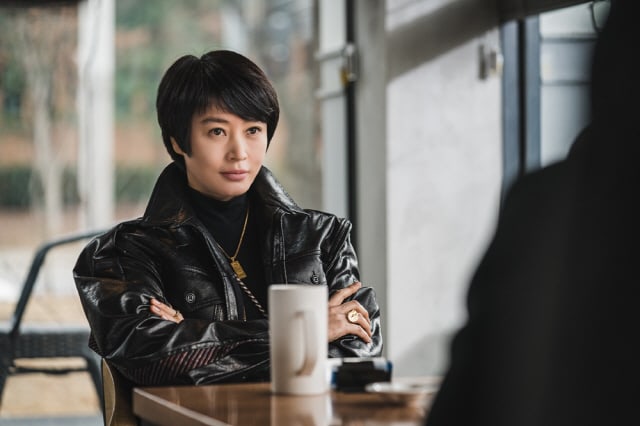 In “Hyena,” Yoon Hee Jae (Joo Ji Hoon) falls in love with Jung Geum Ja (Kim Hye Soo) and makes it pretty obvious that he wants to be with her. What Hee Jae doesn’t know is that it’s all part of Geum Ja’s master plan. Hee Jae is a lawyer at an elite law firm, and Geum Ja, who is also a lawyer, is trying to do whatever she can to get high profile cases so that she can make more money. The two realize that they’re total opposites and are better off staying away from each other, that is, until a specific case forces them to work together.

A lawyer is hardly what comes to mind when you think about a warrior, but Kim Hye Soo in “Hyena” is undoubtedly a warrior. When she single-handedly takes down a man who is trying to kill her, wearing heels and carrying a purse, she has earned the title of warrior. There is nothing in the streets that intimidates or scares Jung Geum Ja, and she is willing to stand up to anything that comes in her path.

4. Sooyoung in “Tell Me What You Saw” 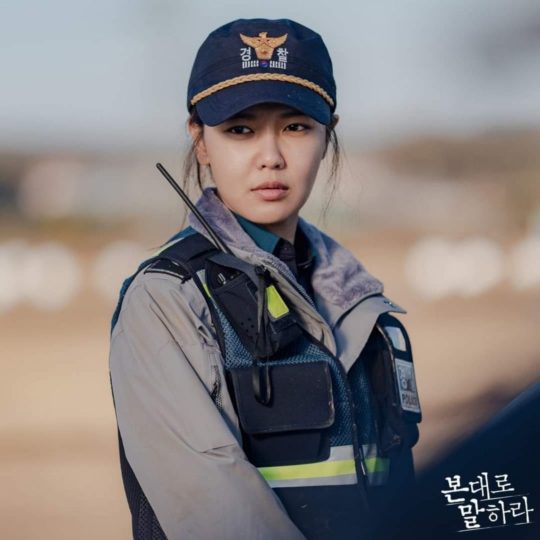 “Tell Me What You Saw” is a mystery thriller about Oh Hyun Jae (Jang Hyuk) who is a profiler and has lost everything. He partners with Cha Soo Young (Sooyoung), who has a special gift and amazing photographic memory. They work together to solve a mystery that involves a serial killer.

Seeing Sooyoung in a role as a ruthless detective is all we could have ever asked for. The charisma in which she acts with is undeniably good, and her fight scenes look effortless. The intensity in her eyes as she confronts various suspects and witnesses really showcases her abilities as an actress. Sooyoung is made to do action K-dramas, and we can only hope that she’ll continue on this path! 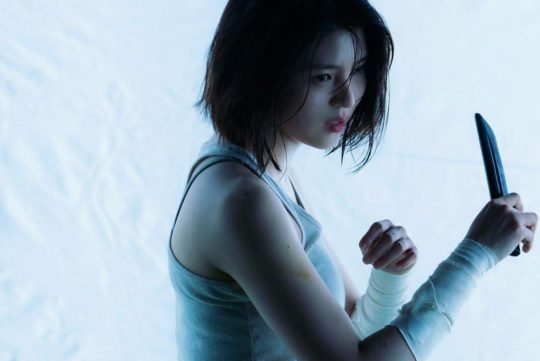 Han Soo Hee very well takes the cake in terms of female warrior of the year. Her portrayal as the brutal and ruthless Ji Woo in “My Name” is flawlessly executed. The cutthroat fight scenes and way in which she handles the physicality of all the action is almost unbelievable. Han So Hee’s transformation and the versatility in all the roles she has taken on are remarkably noteworthy. 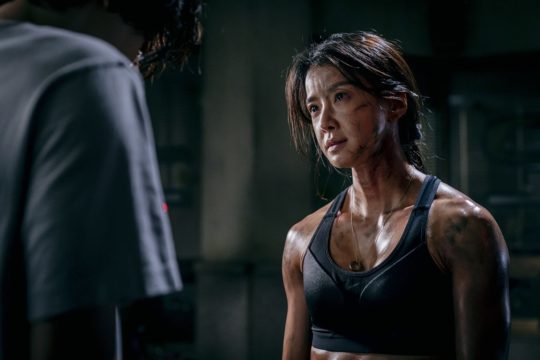 Based on the webtoon of the same name, “Sweet Home” is about Cha Hyun Soo (Song Kang), a bullied high school student who loses his family in an accident. He moves into an apartment and is faced with monsters that are slowly overtaking the world. He fights to defend the apartment he is living in along with a group of other tenants. Among these tenants is former firefighter Seo Yi Kyung (Lee Si Young).

It is no secret that Lee Si Young is an action star. She is known to work out vigorously and also dabbled in some amateur boxing, which is more than impressive to say the least. She bulked up for her role as Seo Yi Kyung in “Sweet Home,” and it was more than evident that she worked ridiculously hard to become her character for the series. We really couldn’t have expected anything less from Lee Si Young.

7. Kim Sejeong in “The Uncanny Counter” 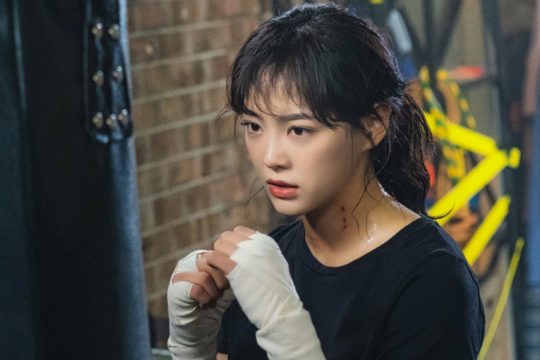 Jo Byeong Gyu, Yoo Joon Sang, Kim Sejeong, and Yeom Hye Ran star in “The Uncanny Counter,” a drama based on a popular webtoon. The series has a unique story as it involves a boy named So Moon (Jo Byeong Gyu) who was left crippled and as an orphan after he and his parents were in a car accident. As a high school student, So Moon gains unknown powers and comes to learn that they were given to him so that he can fight evil spirits that are refusing to go to the afterlife.

It’s hard to believe that this bright and smiley K-pop idol could transform into a lean, mean, evil spirit fighting machine, but she does it almost flawlessly. Kim Sejeong has obviously put in the work when it comes to effectively portraying her superhero character Do Hana in “The Uncanny Counter.” The charisma in her eyes as she takes down the bullies, criminals, and evil spirits is not to be messed with. Looking forward to seeing her take on more action roles!

This epic blockbuster of a series stars Lee Byung Hun as Eugene Choi and Kim Tae Ri as Go Ae Shin in a historical piece set in the early 1900s. The story involves Eugene falling in love with Ae Shin despite their starkly different backgrounds. Eugene was born as a slave but runs away to the United States where he becomes a Captain of the Marine Corps while Ae Shin is a Joseon noblewoman. 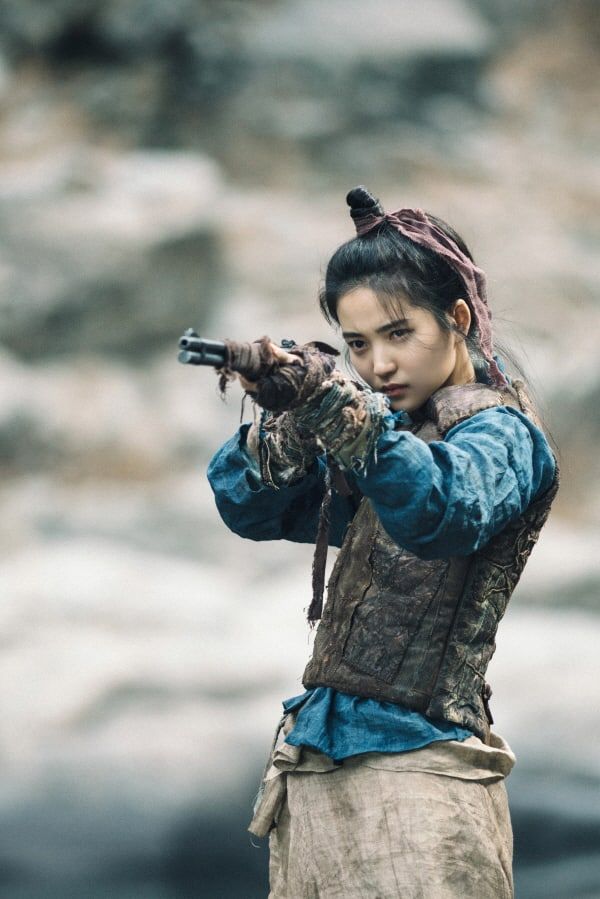 Kim Tae Ri’s performance in “Mr. Sunshine” is unforgettable. She makes the already heart-wrenching story that much more compelling with her portrayal as Go Ae Shin, a woman who is living a double life in hopes of bringing justice to the city she lives in. She has the heart of a true warrior and makes sure things get done to help her country seek justice. 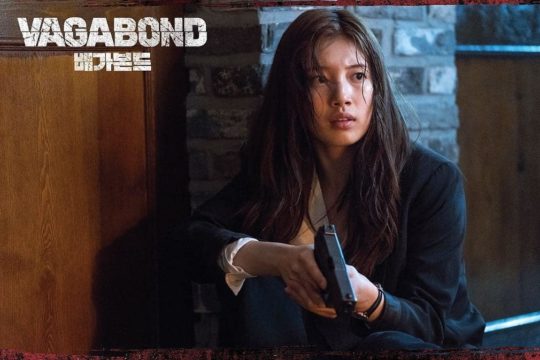 “Vagabond” is a spy action K-drama that keeps viewers on the edge of their seats until the very end. The hot and heavy romance between the stunt man Cha Dal Geon (Lee Seung Gi), who is trying to get vengeance on the death of his nephew, and Go Hae Ri (Suzy), who plays a secret agent, is enjoyable to watch, and it was worthwhile seeing the two reunite.

Aside from the undeniable chemistry between the two main leads, seeing Suzy in another kickass action role was pleasantly surprising. Her role as Go Hae Ri once again proves that Suzy is not just a pretty face. She can really throw a punch and does so in a way that’s very convincing as an action actress. Let’s hope that “Vagabond” comes back with a Season 2 so that she can reprise her role! 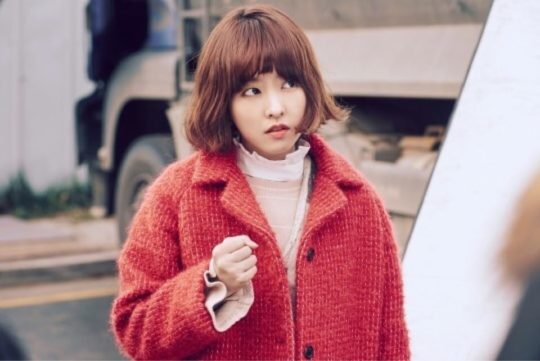 This rom-com stars Park Bo Young, Park Hyung Sik, and a bunch of hilarious supporting actors. The K-drama follows the story of Do Bong Soon (Park Bo Young), a young woman gifted with superhuman strength. She falls in love and hopes to achieve her dream of becoming a game designer.

Park Bo Young as Do Bong Soon brought in another type of female heroine as a main lead. Despite her super strength, Bong Soon has a lot of relatable qualities for many people. Her struggles in wanting to achieve her dreams and falling short in various aspects of her life make her a lovable character. The fight scenes are also very entertaining and hilarious, which only prove yet once again that Park Bo Young can do it all.

If you haven’t watched “Strong Woman Do Bong Soon” yet, start here: 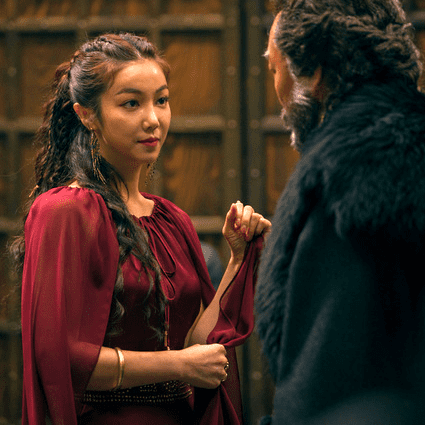 “Arthdal Chronicles” was one of the most highly anticipated dramas at the time. The main reason for its buzz was its Hallyu-packed cast which includes the likes of Song Joong Ki, Jang Dong Gun, Kim Ok Bin, and Kim Ji Won. The story involves various tribes trying to conquer the land. There is one tribe, in particular, that is led by Tagon (Jang Dong Gun), who is evil and has it in his best efforts to make sure he’s the ruler of all tribes.

What would a K-drama actress warrior list be without the mention of Kim Ok Bin? Kim Ok Bin is known in the industry as being an action star and for having the skills to take on various roles that are physically demanding. Her role as Taealha in the series has so many cool action scenes that pleasantly showcase her capabilities as an action actress. Even her co-stars mentioned in an interview that she worked the hardest for the action scenes. We would not have expected anything less from her!

“Stranger” is a drama about Hwang Shi Mok (Cho Seung Woo), a prosecutor who has a unique ability to see certain parts of a crime scene in his head. He works with Han Yeo Jin (Bae Doona), a passionate detective, to fight against criminals. 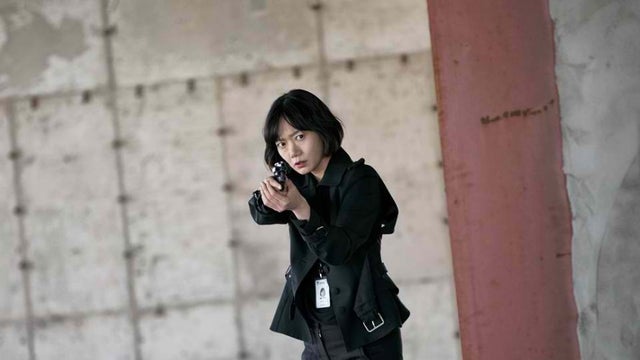 Bae Doona has also had her fair share in action-packed roles. With “Kingdom” and “Sense8” also in her filmography, she is no stranger to striking a punch or two in her roles. Although her character in this series is very warm-hearted in comparison to Hwang Shi Mok, it does not stop her from delivering some hard-hitting action scenes.

Hey Soompiers, who are some other female K-drama warriors that you love?