Lee Seung Gi and Kai, who are co-stars on the new Netflix variety show “New World,” made an appearance on the October 20 episode of “Knowing Bros.”

Lee Seung Gi agreed and said that the friend he is talking about is Kim Heechul, who is also a cast member of “New World.” Kang Ho Dong pouted and asked Lee Seung Gi, “Can you really live without me?” and Lee Seung Gi joked, “I think I’m doing even better.” 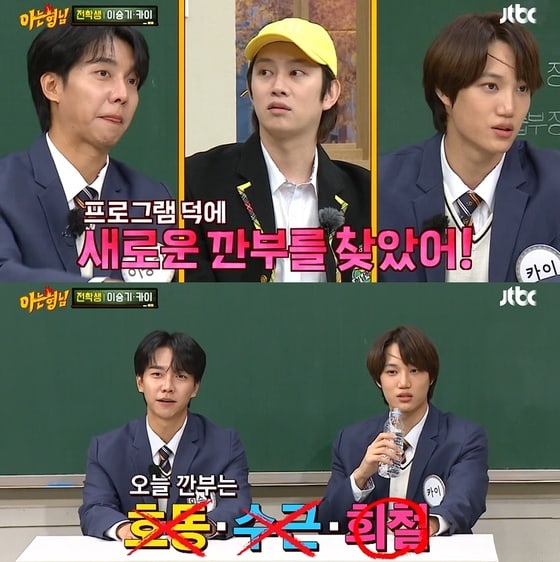 When Kang Ho Dong complained that the three of them were in a variety show without him, Lee Seung Gi revealed, “We strongly recommended Kang Ho Dong, but we were rejected.” Bringing up the rumors of Kang Ho Dong being paid 1 billion won (approximately $845,300) in appearance fees, Seo Jang Hoon remarked, “Even if it’s Netflix, they can’t pay 1 billion won per episode.” Unfazed, Kang Ho Dong revealed, “I do ask for 1 billion won. But it never seems to work out.”

Lee Seung Gi praised Kai for his passion and good sense, sharing, “If Kai had met Kang Ho Dong 10 years ago, he might not have been part of EXO. He may be sitting in Lee Soo Geun’s seat right about now.” Lee Soo Geun replied, “Then I would have become a member of EXO,” and got up dance.

Though Lee Seung Gi teased Kang Ho Dong earlier on, he also showed his respect for him by calling him his teacher. He explained, “Kang Ho Dong has strict regulations about variety shows. Not wearing a hat. Not bringing your phone to the set. Not wearing an umbrella when the cameras are rolling even if it’s raining.”

At that, Kim Heechul, Kang Ho Dong rummaged through Kang Ho Dong’s pockets and pulled out Kang Ho Dong’s phone. Sweating profusely, Kang Ho Dong explained, “I have to connect with the broadcasting department with Bluetooth.” Laughing, Lee Soo Geun asked, “Why are you wearing a hat? And when it rains, you don’t get out of your car.” 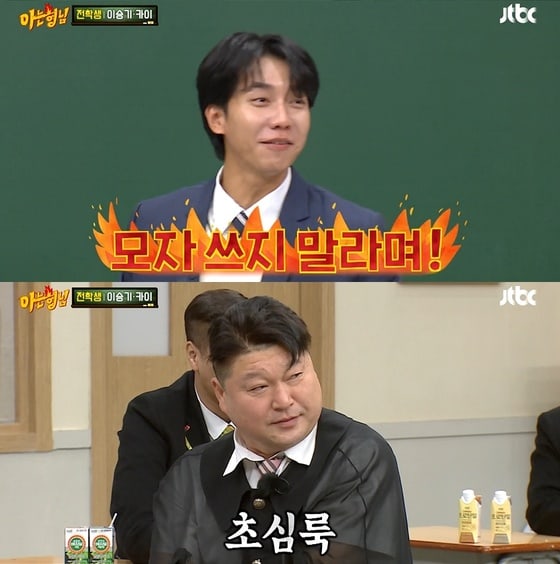 Lee Seung Gi spoke about a special talent of his, which is to avoid natural disasters. He revealed, “For years, I’ve never been through a storm.” Lee Soo Geun agreed and recalled the time when they went to the Cheonji crater lake in Mount Baekdu during “2 Days & 1 Night.” “We weren’t supposed to be able to see it. It’s only visible during 70 days in a year. But we saw it, and we were with Lee Seung Gi.”

Kai also danced to his new song “Peaches.” Check out his performance below!