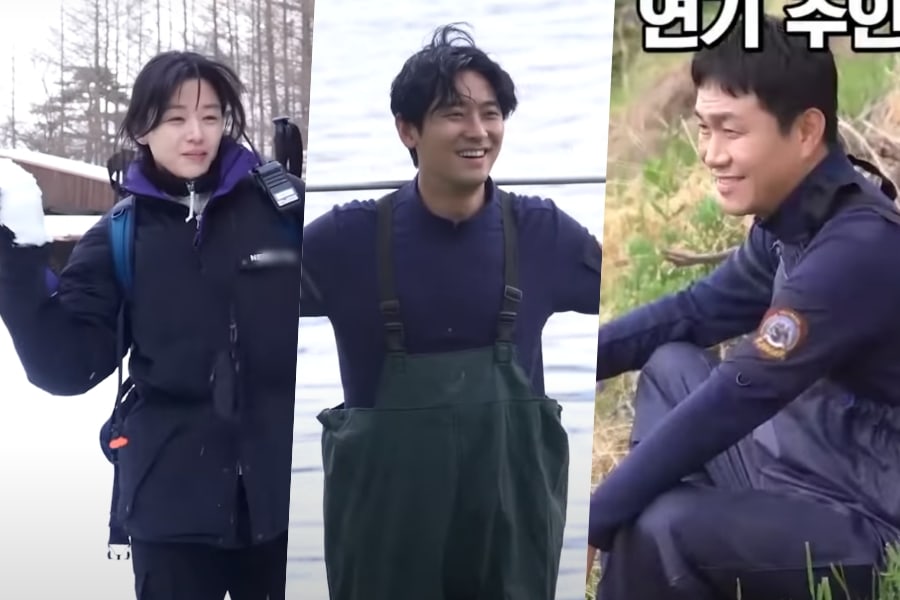 The making-of video begins with Joo Min Kyung and Park Hwan Hee laughing while filming, despite the difficulty of the scene. Joo Min Kyung throws herself onto the ground, not holding back in the slightest. Meanwhile, Oh Jung Se also immerses himself in his role, desperately searching for Joo Min Kyung.

In the next scene, the cast gathers together at a water tank set for filming where they create heavy fake rain and winds to simulate a strong storm. Oh Jung Se dives into the water without hesitation, and the rest of the cast follows suit. Later, Joo Ji Hoon jokingly mentions Oh Jung Se’s method acting when he sees the other spacing out before filming.

On the mountains, the actors are busy running across the forest in order to film their rescue scenes. When Joo Ji Hoon walks over, Jun Ji Hyun asks accusingly, “Is he not running?” Joo Ji Hoon explains, “Our relationship isn’t good right now because you said, ‘You killed my grandmother!'” Jun Ji Hyun suddenly recalls the scene, and Joo Ji Hoon jokes, “I should be moving, but it’s [a little awkward between us].” Jun Ji Hyun also congratulates Oh Jung Se for his win at the 57th Baeksang Arts Awards for Best Supporting Actor. She teases, “Since you won Best Supporting Actor, something should have changed.”

While filming with fake snow, Jun Ji Hyun gets excited and tries to throw herself onto the snow, but it isn’t as satisfying as she expected. She also gets playful and throws a snowball at the director, who replies that there isn’t time for a snowball fight. After she falls into the snow for one of the scenes, the director walks over to help her up while laughing. Jun Ji Hyun jokingly asks, “Director, are you embarrassed of me? Why are you laughing? I can’t do this. I can’t do this shoot.”

Despite the nature of the scenes, the cast remains cheerful the entire time while filming. Sung Dong Il collapses after running up the mountain, and Oh Jung Se talks about how Sung Dong Il ran so fast he couldn’t catch up. Sung Dong Il explains that it’s because he also has the duty of performing CPR (cardiopulmonary resuscitation) on Joo Ji Hoon.