Jung Hae In And BLACKPINK’s Jisoo Dish About Working With Each Other, How They Were Cast For “Snowdrop,” And More

PD Jo Hyun Tak explained the drama’s title, sharing, “The title was suggested by the writer. Within snow, a snowdrop is a blooming flower that pierces the snow, and what it symbolizes is that spring is not too far away. It also symbolizes that if you hold out a little longer, spring is coming. In the dorms, Jung Hae In and Jisoo experience an accident that they cannot handle, but within that harsh ordeal, there is still a message of hope that the title captures. To add, I was also drawn to the word.”

Even before the drama had premiered, parts of the synopsis began to circulate around online communities and the program was criticized for potentially distorting historical facts. Although JTBC addressed these concerns at the time, PD Jo Hyun Tak gave additional comments at the press conference. He shared, “‘Snowdrop’ is a plan that writer Yoo Hyun Mi has prepared for a long time. She says she was inspired by the writing of a North Korean defector who escaped from a concentration camp in 2008. Following that, she endured many ups and downs until the story was finalized, and included her own experience of women’s dorms from attending university in the 1980s. As those connections were combined, the details of ‘Snowdrop’ emerged.”

He continued, “As it began from the writing of a North Korean defector, there are mentions of North Korea in the material but rather than it being political or ideological, [it’s about] the person from North Korea. Instead of focusing on North Korea, I thought that we tried to look deeply and get a closer look at the person.”

While Jo Hyun Tak explained that the producers reflected on their mismanagement that led to the spread of the synopsis, he added that “Snowdrop” was still a project created with responsibility and a sense of duty and asked viewers to personally confirm this by watching the premiere.

Regarding the choice to cast Jung Hae In and Jisoo, Jo Hyun Tak commented, “From the beginning stages, Jung Hae In was an actor I really wanted to work with. Right from when we were making the synopsis, I had Jung Hae In and our writer in mind as top priorities and prepared as I materialized.”

He added, “That’s how I was rejected after making an offer to Jung Hae In. I turned over a new leaf and suggested it again and thankfully after numerous considerations, he said yes. The day Jung Hae In agreed, we met for drinks and that was one of my happiest days while working on ‘Snowdrop.'”

About Jisoo, the PD shared, “Although the writer and I are preparing the character of Young Ro, we can’t know what kind of person she is. We thought that the actor would have to come and complete the character but we didn’t think that a rookie actress would play Young Ro. However, as soon as I saw Jisoo, I thought, ‘That person is Young Ro.’ As soon as I met her, I remember imploring and compelling her saying, ‘You have to do it no matter what.’ Although I had no dignity, I remember it was hard to hide my feelings so I just suggested it.” 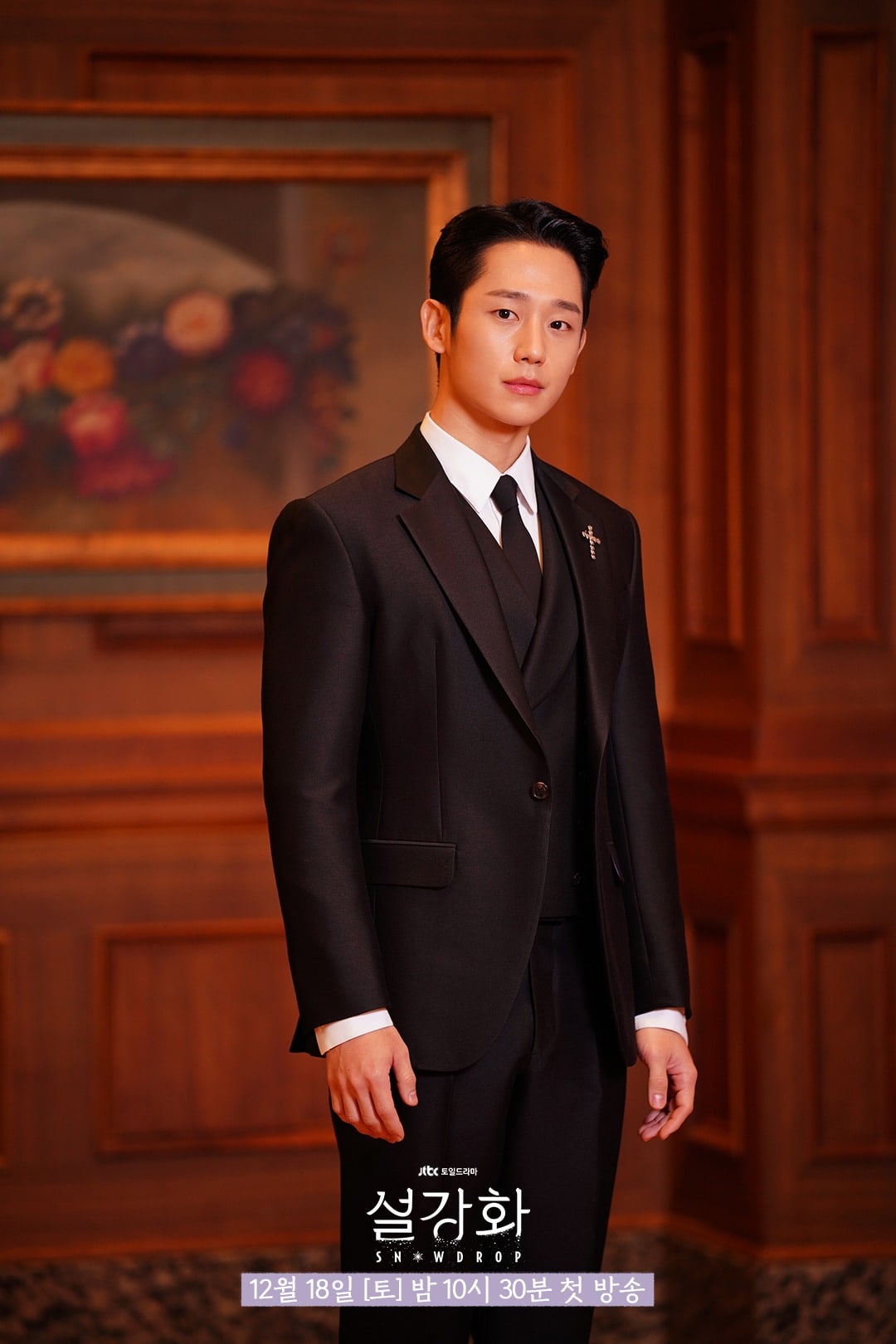 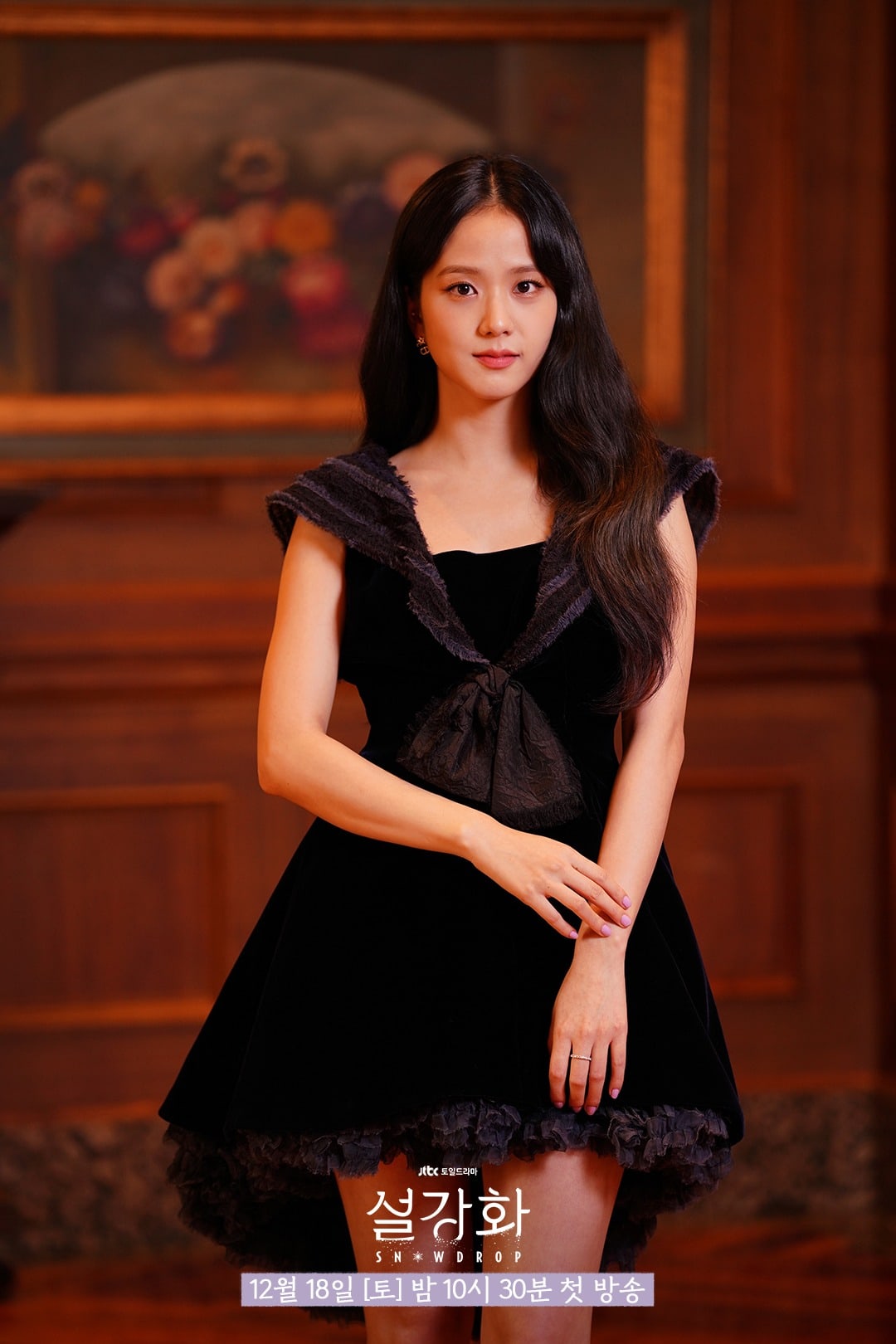 Jung Hae In plays Suho, a student from Germany who studies at a prestigious university. He has a soft charm and a sweet smile, but also has a mysterious aura to him. One day after a mysterious event, Suho rushes into Young Ro’s women’s dorm covered in blood.

Jung Hae In shared why he chose “Snowdrop,” explaining, “I had trust in the director and writer and the story was so fun. That was a large part. When I first met the director, I was very confident in the unpredictable ending and the development. I thought that if we were to create a project together on set, it would be fulfilling and I’d be able to act happily. He had such complete trust in me that I couldn’t say no. Since the character had a lot of action [scenes] by nature, I had to perfectly prepare my physical strength. If you look at it one way, the character of Im Su Ho is a pure youth, but he’s a man with strong leadership that changes after meeting Young Ro and discovers the emotions of love.” 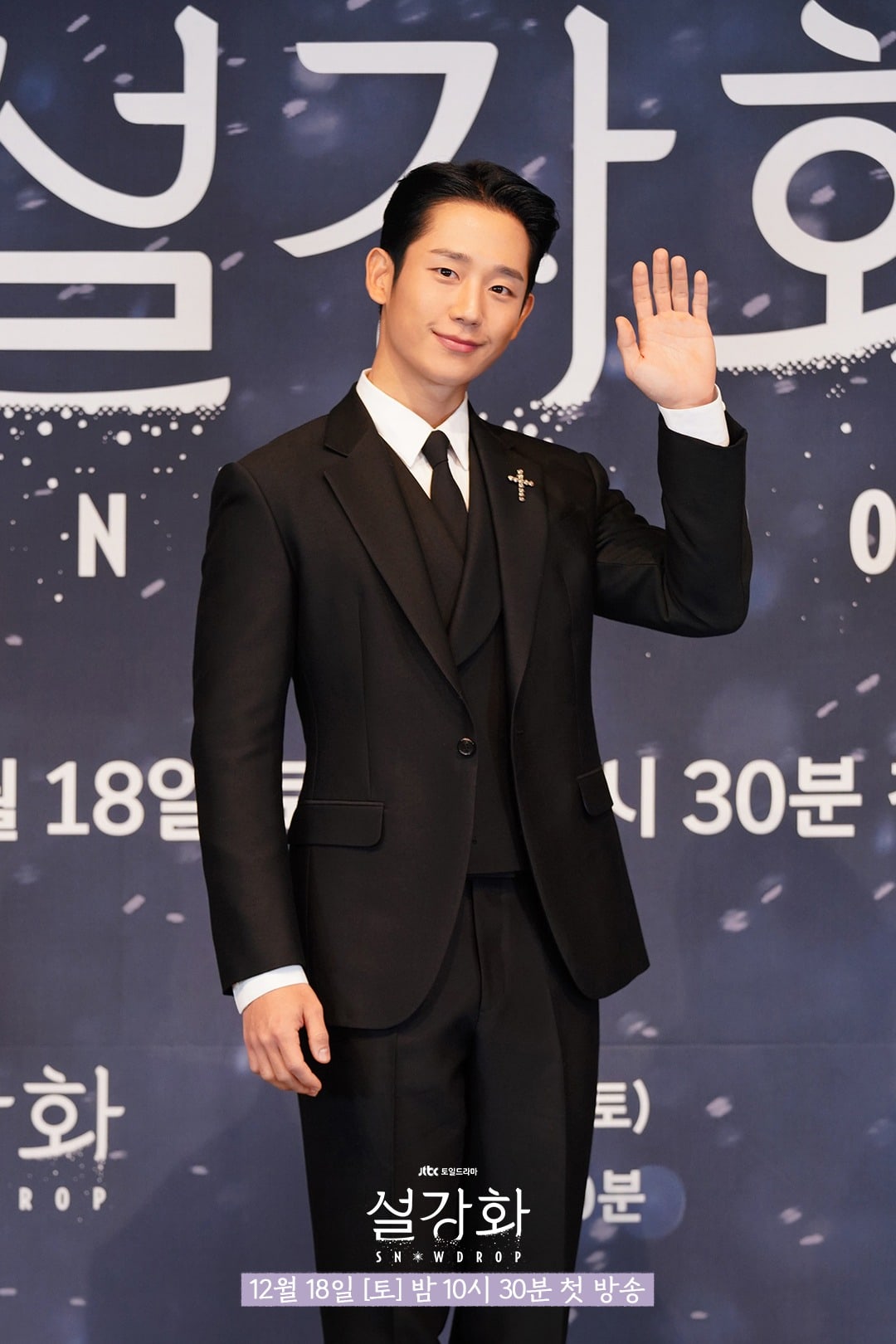 BLACKPINK’s Jisoo will be taking on her first lead role in “Snowdrop” as Young Ro, a cute and bright English major at a women’s university. When she runs into Su Ho for the first time in her dorms, she falls in love at first sight and secretly takes him in to treat his wounds. Jisoo commented, “I was nervous because this is a field I’m trying for the first time, but once I was doing it on set, it felt like I had become Young Ro. Everyone took such good care of me so I filmed enjoyably.”

Jisoo continued, “Before I went to my audition, I was reading the script and was drawn to Young Ro because she had such a bright charm. I thought it’d be good if I could share that bright energy with others. I think I have a lot to learn from Young Ro who is bright and tries to give lots of people energy, despite not having lived a smooth life herself. I learned a lot while acting as Young Ro.” 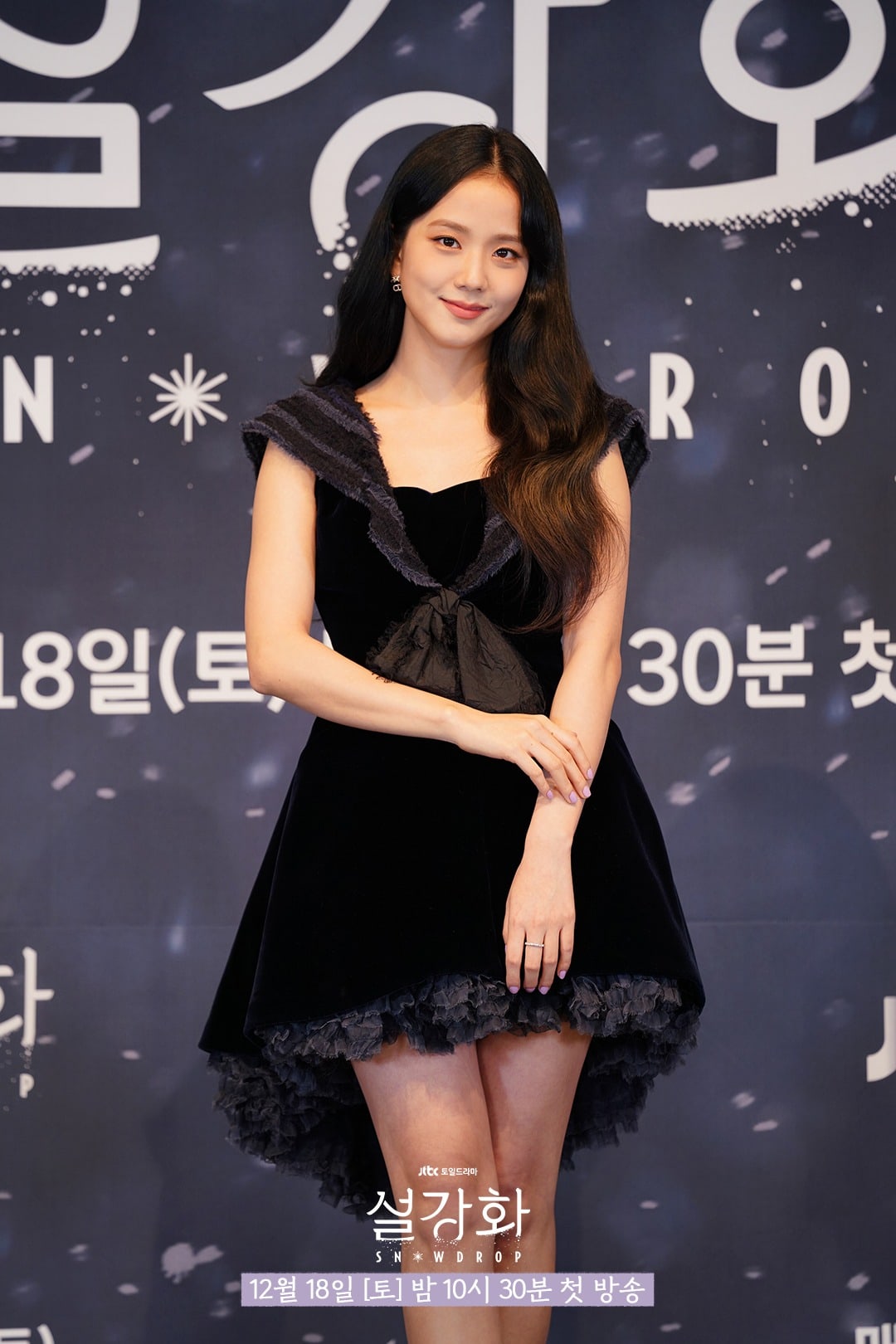 The two actors also discussed their chemistry. Jung Hae In shared, “Each filming was a consistent sequence of surprises. Acting is something you create together with the opposite person but she was so considerate and would immediately understand and implement directions from the director for scenes we were filming together, which is not easy. This could take time but I was surprised that the period was so short and was surprised because she was implementing it so well. Since the character at the center of the plot is Young Ro, there are a lot of people around her. Within that, she was stable and made sure that the other students in the dorm could act comfortably. That’s why I was thankful.”

Jisoo added, “Since I was acting for the first time, I wasn’t sure how I was coming out [on video] and was lacking in many aspects. Jung Hae In led me along well and treated me comfortably so it was an environment that I could focus more in.” 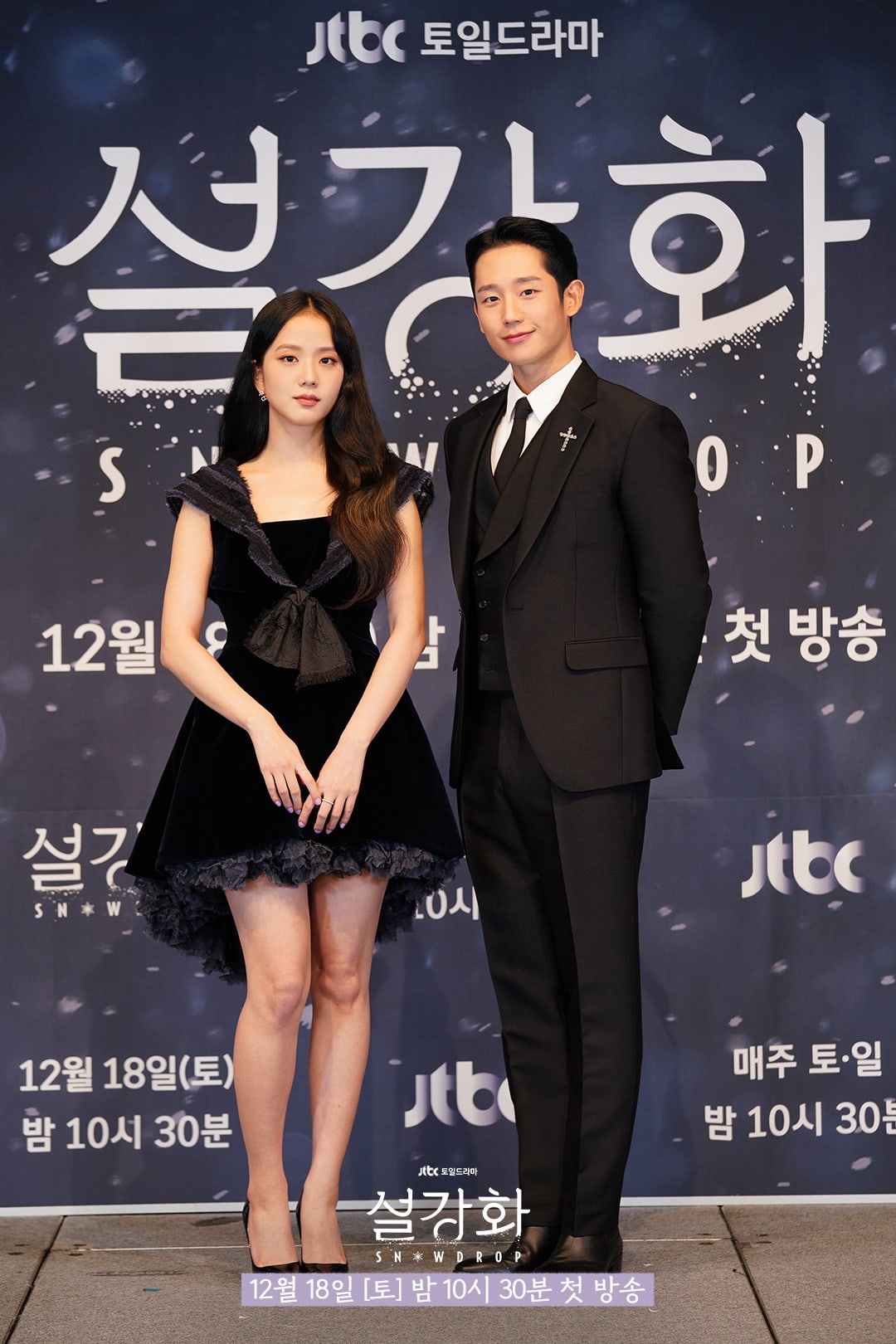 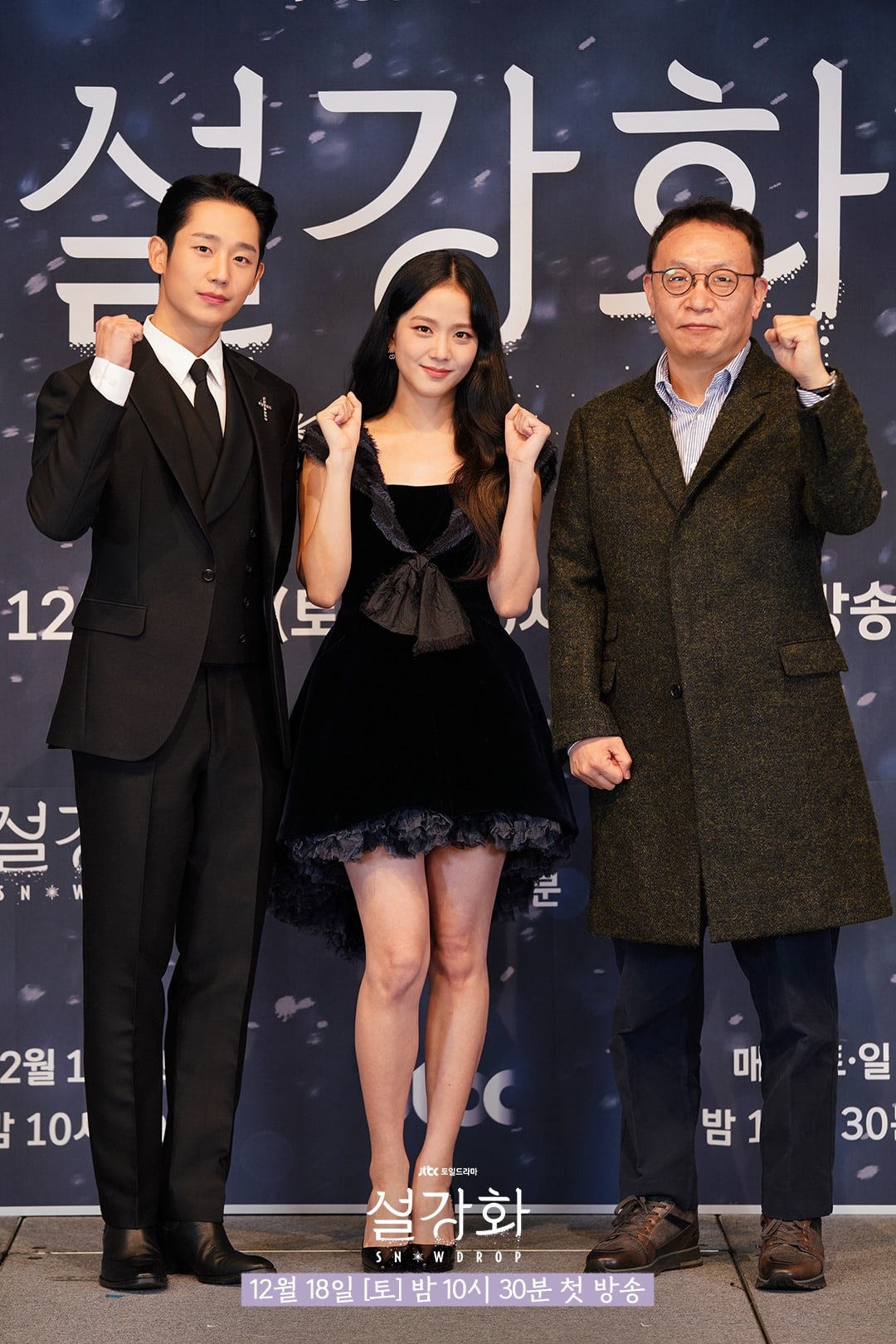 To conclude, Jung Hae In shared, “[‘Snowdrop’] was created over a long period of time by the hard work of many people. It’s going to be really fun. I hope you enjoy it. Inevitably, the dorms were a really important setting, and through this opportunity, I want to say thank you to all the actors who were there with me. There were things there that I couldn’t have gotten caught up in or do all by myself. I received a lot of help. Thank you.”

Jisoo continued, “I think a really great drama will come out through [the work of] many staff members, good music, and good production. I hope you will give lots of love to ‘Snowdrop’ which premieres this week. Please watch enjoyably.”

PD Jo Hyun Tak commented, “There isn’t much time left before the premiere. After starting with the small excitement of Jung Hae In and Jisoo’s love story, they end up experiencing an extreme pain that one person cannot endure. Please stay tuned to find out whether their love is a blessing or a curse.”

Watch Jung Hae In in “A Piece of Your Mind” below:

BLACKPINK
Jung Hae In
Jisoo
Snowdrop
How does this article make you feel?