MONSTA X Talks About Performing Overseas For The 1st Time In 2 Years, Shares Gratitude For Fans, And More

MONSTA X talked about wrapping up their recent promotions in the United States!

Earlier this month, the group joined the iHeartRadio Jingle Ball Tour lineup for the third year, performing in Philadelphia on December 13, Washington, D.C. on December 14, and Atlanta on December 16.

In the same month, MONSTA X also released their feature film “MONSTA X: The Dreaming” all over the world and dropped their second full-length English-language album “The Dreaming,” making appearances on hit American radio and TV shows like “102.7 KISS FM,” “Good Morning America,” and the “Zach Sang Show.”

Regarding the group’s first promotions overseas in two years, Minhyuk commented, “Before COVID-19, MONSTA X diligently promoted overseas, but because of a situation we couldn’t do anything about, departures were blocked and we became unable to see foreign fans. After that, there was always a part of my heart that felt frustrated. Through these promotions, I think I was able to get rid of some of that frustration.”

Hyungwon added, “Throughout these promotions, I kept remembering moments from our past world tour. Back then, meeting our fans was natural and there were no uncomfortable situations where we had to be careful because of COVID-19. Although I felt thankful that we were even just looking at one another, I had a lot of mixed happy and complicated emotions. I mostly thought that I wanted this situation [with COVID-19] to quickly end.”

Joohoney shared, “Just with how much our Monbebe [MONSTA X’s fan club] enjoyed seeing us, I think these promotions were a success. Two years is by no means a short period of time and I figure that this was a meeting both MONSTA X and Monbebe were really waiting for. I got emotional seeing how [our fans] waited without forgetting about us and then sending MONSTA X really warm support because they’ve waited so long.” 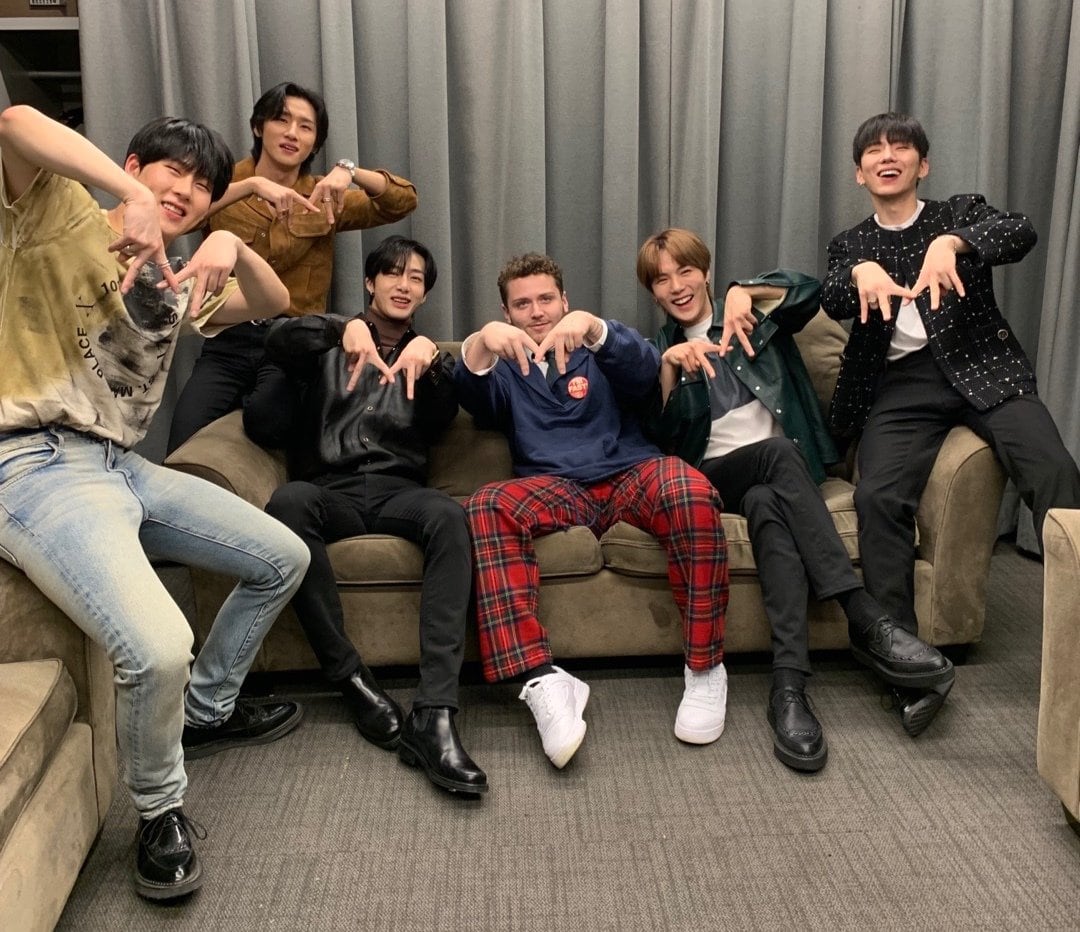 The members were also asked how the Jingle Ball Tour was and Minhyuk replied, “At first, it was so awkward that there were people in the audience. MONSTA X continued with promotions even after COVID-19 began, but since we only did online performances, I couldn’t even remember the last time I saw a full audience. I couldn’t believe it and wondered whether I was dreaming, but I was so happy all throughout the performance. However, we were also really disappointed that the Miami performance was cancelled on the day of due to COVID-19. We plan to seek you out on our upcoming world tour so I hope [our fans] aren’t too disappointed and I want to tell them that we’ll greet them with an even better image.”

Kihyun shared, “It was an indescribable time. The way [fans] were shaking their light sticks to match the song we were singing and exploding in cheer to match the key points of our performances could not have been more thrilling. It’s not like we’re a group that hasn’t done performances as MONSTA X is a group that has done many. I guess I could say that I was able to feel that I was breathing. I don’t think I’ll be able to forget those emotions I was feeling on stage.”

I.M continued, “Through the Jingle Ball Tour, I think that MONSTA X was actually able to receive a lot of energy. Like we shared in our film, without our fans, we’re just an empty shell. We really felt that affection and support on stage and received good energy. It was an opportunity for us to close out 2021 happily and we returned after gaining the drive to continue moving forward again.”

With 2021 nearing its end, MONSTA X also left messages for the fans who have been with them all year. Minhyuk commented, “I hope Monbebe recognize that we tried to show our faces through more promotions because we haven’t been able to see each other a lot. Next year, MONSTA X will still be in this same place and I believe that Monbebe will be right beside us. Thank you for this year!”

Kihyun shared, “Because Monbebe were by our side, 2021 was another happy year. Since health is most important, please pay close attention to your health and I hope you spend the end of the year warmly. I will promise that MONSTA X won’t get hurt and will stay healthy.”

Hyungwon continued, “I hope we can spend lots of time together in 2022, as much as we weren’t able to see each other this year. I will be hoping for that to happen. I think that Monbebe will feel the same as MONSTA X. It’ll be great if we can see each other more often next year, Monbebe.”

Joohoney shared, “2021 was a year where I achieved a lot. The reason I was able to achieve so much is all because I had Monbebe’s solid support. MONSTA X plans to work diligently next year too, so if you come along with us, I think we’ll be able to greet you with an even greater image. I am thankful to you for 2021 too.”

Lastly, I.M added, “Next year, I want to show MONSTA X performances in front of Monbebe in Korea. Let’s believe together that that day is not far. Monbebe, I love you.”