Golden Child’s Bomin Talks About His Character From “Shadow Beauty,” Roles He Wants To Try Next, And More

Following the finale of “Shadow Beauty,” Golden Child’s Bomin took time for an interview to express his thoughts.

Based on the popular webtoon of the same name, “Shadow Beauty” tells the story of high school student Goo Ae Jin (played by Shim Dal Gi), who is a bullied loner at school. However, she leads a double life online as a popular influencer named “Genie” who is renowned for her flawless looks (played by fromis_9’s Lee Nagyung). Bomin stars in the drama as class president Kim Ho In, who is in the same class as Goo Ae Jin, while PENTAGON‘s Hongseok plays idol Lee Jin Sung, who was her only friend at school back when he was a trainee.

Bomin shared thoughts on the drama’s conclusion as he commented, “The first step is always the hardest, and ‘Shadow Beauty’ was the first project that I featured in as a main character, so I felt a lot of pressure. I made an effort, too, but thanks to the help of the director, various staff members, and my co-stars, I was able to finish filming safely.”

When asked what he learned from his first drama as a main cast member, he replied, “There are many things that I have to do on the set, so I learned a lot about acting. In addition, I was able to grow into a better person by being more meticulously considerate to the staff members who were working hard for ‘Shadow Beauty’ and me.”

For his most memorable scene to film, Bomin picked the emotional scene where Kim Ho In shed tears and shared his innermost feelings. He explained, “This is because it was a scene that was hard to depict yet I wanted to show well because it will make viewers understand his past.”

Then Bomin described his character, saying, “Like his nickname, Kim Ho In is a ‘fan of deducting.’ In a way, he doesn’t seem to have a humane side, but I thought he was a unique person who became greatly absorbed in what he was interested in more than anyone else.” 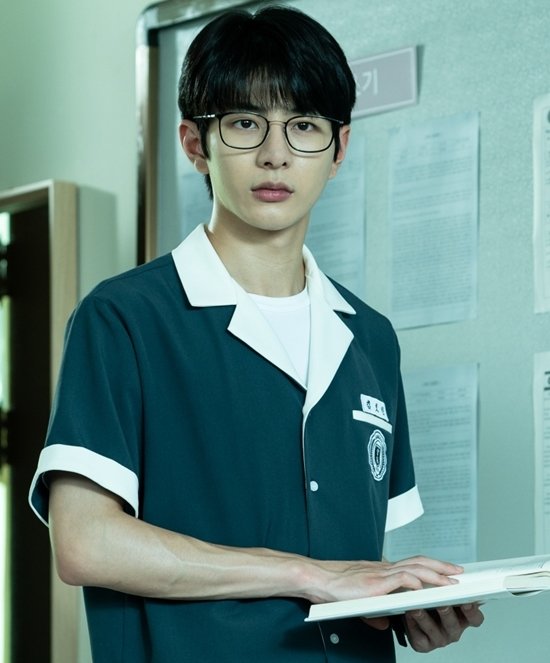 Bomin was asked what kind of genre or role he wants to try. He answered, “I think it’s a very difficult question. The romantic and youthful characters I played before and a character like Kim Ho In I tried for the first time are all attractive, so I’d like to play roles like them again. Rather than deciding on a specific character or genre, if I get the chance, I’m willing to participate in good projects or projects that I can do well.”

Lastly, Bomin commented to viewers, “It was my first leading role, so I started with a lot of pressure at first. Whenever an episode aired, I was nervous and I watched the broadcast too. However, while filming, many people around me helped and supported me, so I was able to relieve the burden and immerse in filming. I was able to finish the drama with good motivation. Above all, I would like to say that Km Ho In was not completed by myself, but with the staff and actors who worked with me. Also, I am grateful that many people loved Kim Ho In and ‘Shadow Beauty’ and watched the drama with warmth.”

The final episode of “Shadow Beauty” ended on December 29.